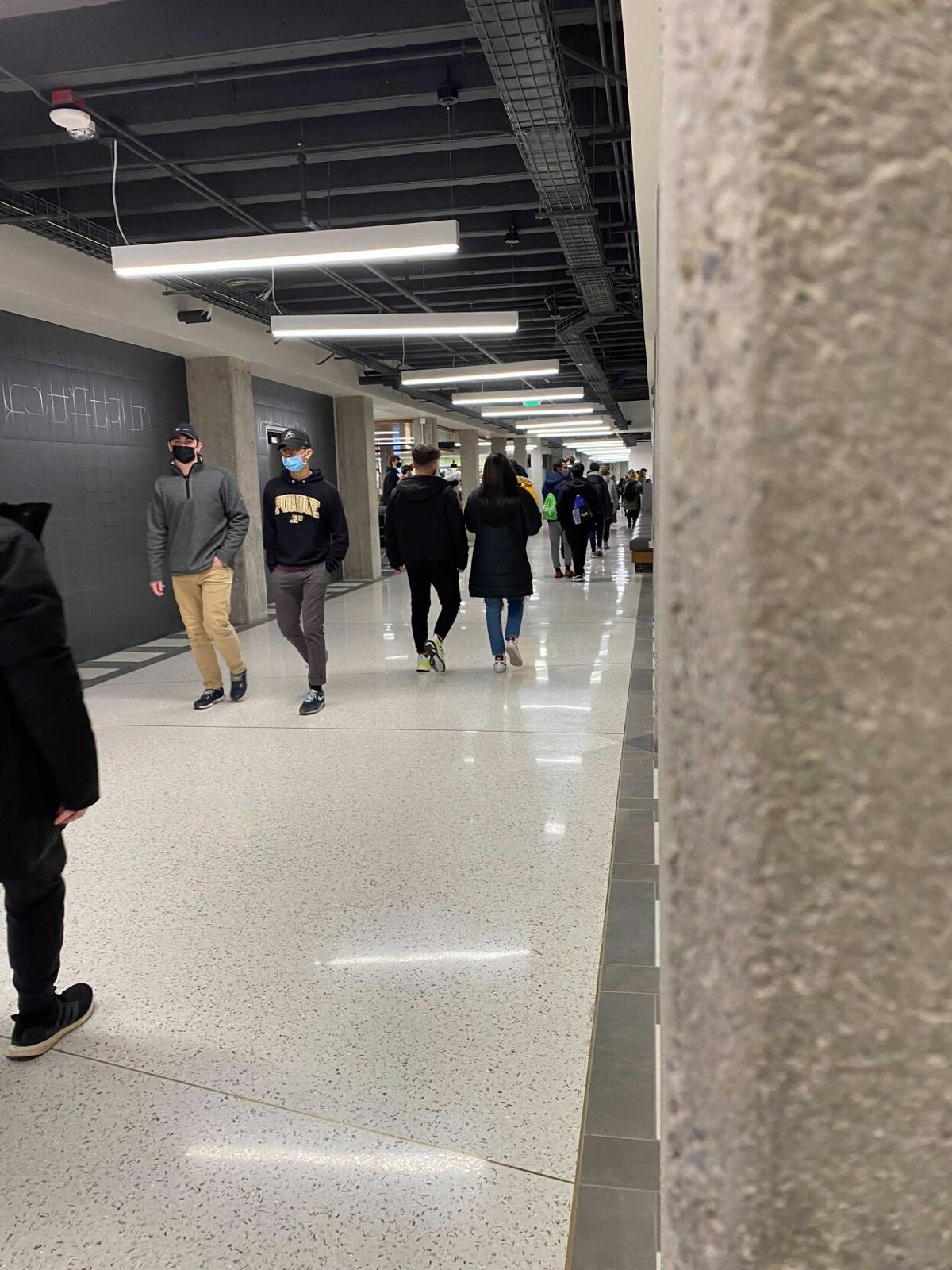 Students walk down a dark corridor of the newly renovated Union. 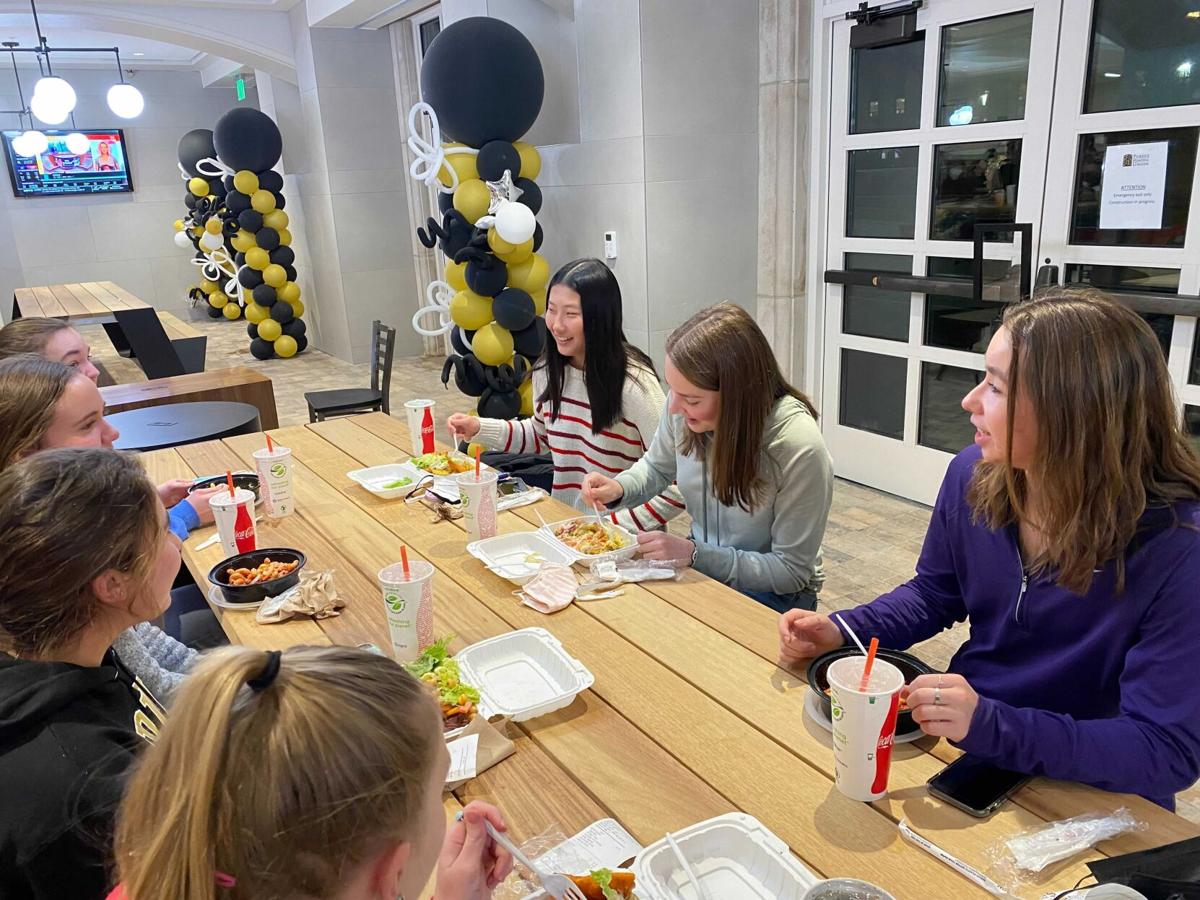 Seven students chat and eat dinner together near Walk-On's Sports Bar in the Union.

Students walk down a dark corridor of the newly renovated Union.

Seven students chat and eat dinner together near Walk-On's Sports Bar in the Union.

In the days following the exciting grand opening of its renovation, the Purdue Memorial Union’s basement corridors is overflowing with students, faculty and visitors eager to explore the space and its impressive new food and convenience selections.

The updated floor features 12 dining options and an increased seating capacity of nearly 350 indoor and outdoor seats. The broad hallways and updated technological features reintroduced visitors to a building whose long-term tenure as the social cornerstone of the university has seldom been disturbed.

But spiritually, historically, the new renovation is empty. It is an amputation of the original Gothic Revival design in favor of the utilitarian, multi-purpose amenity of a shopping mall dining court. With its open floor plan, functional furniture, large windows and overall boxy look, the once venerable Union has been ‘WALCified.’

The stylistic disjunction of the ground from the main and upper floors becomes clear as one takes notice of the details.

The paneling’s color and material is mismatched; the previous oak and plaster columns are replaced by bare concrete pillars; the old wooden furniture and half-dome chandeliers gave way to office-like furniture and lights.

The renovated space says “this is a place to work, not relax,” when the Union should offer a refuge for both.

The previous partition walls have been stripped and the exposure of the pedestrian to every direction leaves them with a feeling of crowded solitude. Formerly, the arched portals offered intriguing views into the insulated spaces and inlets of study groups. The vacuum there today surrounds visitors with a sea of anonymous faces.

The “winks and nods” to Purdue’s rich traditions in the renovation stand more like farcical references rather than any real concerted effort at sustaining the history of the building. The new, mimicked stained glass does not resemble in the least the pastoral beauty of the genuine article in the upper landings.

All of this isn’t to say the old PMU basement didn’t have its problems. I am largely aware of – and also conceivably unaware of – the many issues plaguing the previous space. Cracking paint, water damage and other infrastructural maladies were among the many motivations for the renovation. The dining options were historic but perhaps uninspired.

The PMU ground floor surely needed a renovation, but the reckless and desultory remodeling homogenized the Union into looking like most other buildings on campus.

And it’s not like it had to be this way. The Purdue Union Hotel’s renovation is an example of a correct approach to preservation. The transition from the main floor into the hotel is seamless, and the decor pays homage to the ideals of a land-grant university.

The new renovation reflects a greater tendency of Purdue’s plan for the infrastructure of the university, and indicates a troubling problem for what is already here.

As Purdue moves towards becoming a larger university on the scale of, say, University of Michigan or Michigan State, its mid-century and earlier fixtures are buckling under the weight of the burgeoning student body, to the detriment of both.

It’s interesting, because buildings like Cary, Elliot and Windsor are becoming too elderly and incontinent to remain viable choices for academic and residential usage, but also stand as university heirlooms, too beautiful to simply bulldoze and build over the foundation.

So in return you get Hagle, Meredith South and Chaney-Hale, which offer short-term remedies to Purdue’s ‘growing pains’ but whose uninspired designs do little to improve the aesthetic value of the campus.

To be fair, I am not an architect, and the new ground floor is all the more valuable now it is open than it ever was closed. Sometimes, it is necessary to say farewell to heritage which proves too burdensome or ignorant to hold on to.

Nonetheless, we must be careful with our cultural inheritance, and PMU’s ground floor renovation represents a startling negligence towards our university’s most cherished structure and the offspring of our collegiate spirit.

As a kid, when our family went on vacations, we would always tour colleges for a day. My brother is nine years older than me, so college had been on my mind since third grade.

I would always look forward to seeing the student unions because they were always the center of activity, where I could see actual college students hang out and have fun. I always thought, “this is gonna be me someday.”

Visiting the Purdue Memorial Union as a high schooler did not make me think that. The old basement was cramped and gross. It was full of dark hallways that led to even darker restaurants. The 1869 Tap Room was the only place to find a seat without pushing around a bunch of people.

During my freshman year, I didn’t spend a lot of time in the Union basement. What others thought was cozy, I thought was crusty.

I’m writing this column in the new Union basement and they fixed everything. I’m sitting where Pappy’s used to be and I can actually see what’s in front of me — there are three glass doors that lead to a sunny patio and lights are everywhere, positioned to maximize brightness and minimize glare.

My friend Tyler just said, “the natural light is warming up my body and it feels so good.” Tyler, I could not agree with you more.

The bathrooms are no longer disgusting and everything, from the urinals to the sinks to even the DOOR, is hands-free. Can we get every bathroom to be this COVID-friendly?

New restaurants are all centered around the singular square hallway and the options, while still slightly overpriced, are delicious and cater to every diet. The old Union had long wait times and I had no idea which places took meal swipes. All of the new places, with the exception of Walk-On’s (which gives an airport Chili’s vibe), are focused on providing food quickly so the lunch lines may be long in length but not in time.

The menus are readable and uncomplicated and show clearly what’s offered for a meal swipe. I’ve had an excellent bowl from Sol Toro and my friends gave rave reviews of Pizza & Parm, BBQ District and Zen.

The best part? The space! They managed to increase the seating while decreasing the cramp. I can finally sit down and not have to worry about someone spilling their drink on me, or even worse, coughing on me. I’ve heard concerns that the layout is confusing, but it’s essentially a brand-new building — it’ll take some getting used to. The layout is far less complicated than before.

I understand that the oldheads are going to lose their sense of nostalgia, but that’s the case with anything that gets renovated. Besides, it’s not like they’re the primary demographic of people using the Union; it’s the current students — those that are looking for a place to study, a place to meet up, a place to eat.

I think that Purdue made the perfect compromise by doing a substantial overhaul, while still keeping some remnants of the old basement.

Even though it’s my final semester, I’m so glad the Union turned into the space I’ve been looking forward to for the past decade. Old traditions may be fading away, but it’s high time we started some new ones.