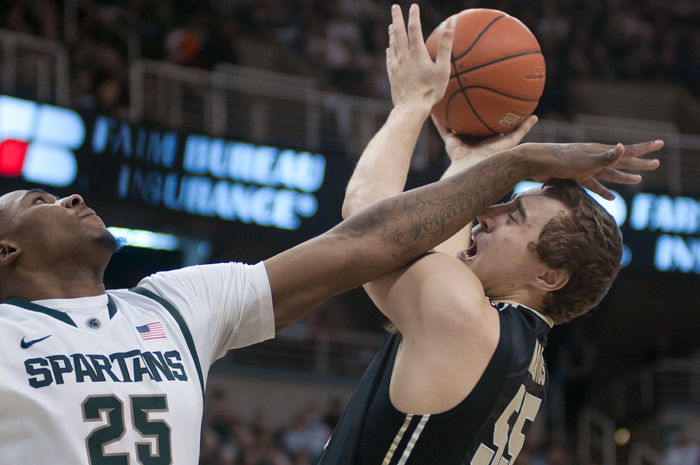 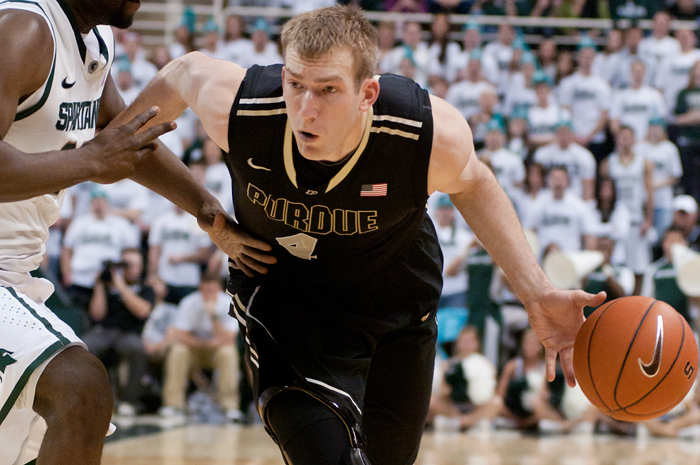 EAST LANSING, Mich. – After the 83-58 loss to Michigan State senior forward Robbie Hummel said he does not care what he hears on the court, even when his own health is a subject of riducule for opposing fans.

"I could give a crap what the other side says," Hummel said. "It's part of the game. They have to come back to West Lafayette and we'll see them there."

After going 0-11 from the field, Hummel said he was frustrated with his own performance and was not surprised to become a target for the Michigan State Izzone members.

"There's not much to say really," Hummel said. "It's embarassing that I didn't make a shot but it was just tough all around. This is one of the toughest places to play in America so obviously if someone hasn't made a shot all game they'll probably pick on him a little bit."

However, coach Matt Painter and Michigan State's Tom Izzo thought the line was crossed when Hummel's ACL injuries were being mocked.

"I think the Izzone is great," Painter said. "But if they're going to say, 'I hope you tear your ACL again,' I'm going to say something. He doesn't deserve that."

Izzo aggreed and said he was dissapointed to hear such things being said by his fans.

On the court the game caused more tension than the 25-point final deficit would suggest. With Michigan State pulling far ahead of Purdue in the second half, Michigan State freshman guard Branden Dawson initiated a verbal exchange with Painter in celebration of a dunk off of a steal.

After the game, Painter said he refused to engage in any way with Dawson, regardless of his comments.

"I think the one thing you've got to do is only coach one team," Painter said. "My players aren't going to talk to opposing coaches. That's our rule, that's how I handled it. I'm not letting a 19-year-old kid rub it in."

Dawson, a Gary native who was recruited by Purdue, said he did not talk to Painter. Rather, Dawson said he was talking with Purdue players he knew, such as Anthony Johnson.

"I think it all had to do with me not going there," Dawson said. "They've got a great program and coach Painter is a good coach."

For his part, Izzo said if his player interacted with Painter, he'd take care of it.

"If he was (trash talking to Painter), I'm going to handle it," Izzo said.

Coming off of two losses, the Spartans were looking for a reason to celebrate and found it by the second half.

Purdue kept the game within reach in the first twenty minutes by out-rebounding Michigan State, 20-12. When shots weren't falling for the Boilers, points off of rebounds kept the first half within six points.

Even with the help of points from the paint, Painter said that style of play was not effective enought to keep Purdue in the game for long.

"You just can't continue to grind against a really good team on their home court and that's what we continued to do since we couldn't make a shot," Painter said. "Eventually they're going to take over."

With the Boilers unable to get a opening to the basket and shots not falling from the field, the Spartans took over and the game was decided long before the final buzzer.

"I really don't want to comment on what happens in the last seven or eight minutes when you're down by 30 because the game is over," Painter said. "I thought we had some clean looks but they just didn't go down. Then after that they started shrinking their defense up and just baiting us and it was all down hill after that."

Purdue finished with a final shot percentage of 29 while Michigan State shot 60 percent. Although the Boilers did see improvement with a 79.2 free throw average, the 19 points they gained from the line were not enough to give them much help against the Spartans.

Junior John Hart and senior Lewis Jackson led the Boilers with 10 points a piece. Although he never scored from the field, Hummel pulled down six rebounds for the Boilers along with Jackson. 34 of Purdue's total 58 points came from the bench.

The Purdue Boilermakers lose to the Michigan State Spartans 83-58 at Breslin Center Saturday.