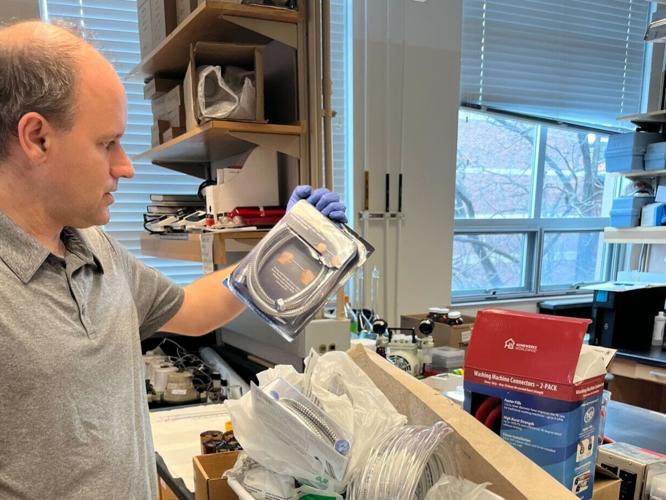 Andrew Whelton, a civil engineering as well as an environmental and ecological engineering professor, has been working on research about water contamination after wildfires. 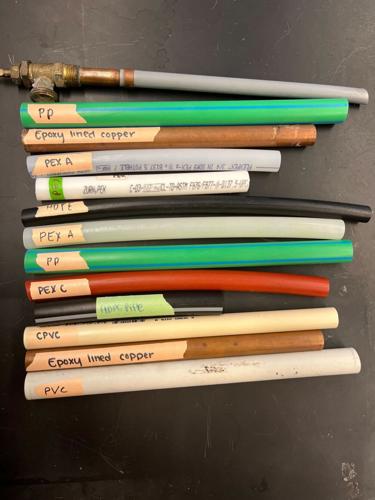 Andrew Whelton, a civil engineering as well as an environmental and ecological engineering professor, has been working on research about water contamination after wildfires.

A Purdue professor was called to the city of Santa Rosa, California in 2017 to assist in water decontamination efforts after the Tubbs fire.

Andrew Whelton and a team of colleagues and graduate students have been researching wildfires, a national problem directly stemming from climate change, and finding solutions to the resulting water contamination.

How he got started

Cities across the country have requested him and his team to come assess wildfire-related water contamination because of his extensive publications on relationships between plastics and their abilities to absorb chemicals.

Infrastructure surrounding a water system’s piping can become compromised when fires take shape. The fires naturally create toxic chemicals that these pipes can absorb and contaminate the water.

When the Tubbs Fire swept through Santa Rosa in Oct. 2017, it contaminated 5.2 miles of the water system and compromised the water systems of 20 homes. Whelton was called in because of his knowledge in decontamination, a smaller aspect of his job as a civilian for the United States Army before working at Purdue. The individual or group that referred Whelton to the city of Santa Rosa is unclear.

“I had never intended to be involved with wildfires at all,” Whelton said. “They called me because they had been flushing out their water system for months, and they couldn’t get the chemical contamination out of it.”

Santa Rosa was the first of many instances where Whelton and a small crew went to wildfire sites with coolers to collect contaminated water samples and assess infrastructure damage, bring the samples back to West Lafayette and offer relief solutions based on the findings.

“We’ll help (them) figure out what the problem and the root cause is, and we’ll give (them) solutions to choose from to fix (their) problem,” he said. “The fundamental research is why did this happen? What is the scale of the problem? What can we do to prevent these types of things from happening in the future or for being as severe?”

The kind of plastic that a water system’s pipes are made of is a leading reason for contamination, according to Whelton’s findings. Chemicals are more prone to be sucked into a water system due to the infrastructure becoming compromised from the fires.

In Santa Rosa, the piping was made of high density polyethylene plastic, which is softer and more flexible than other plastics. It is prone to degrading in high-temperature situations and can allow chemicals to leach into the water system.

“Let’s say firefighters are using a fire hydrant (to put out fires),” Whelton said. “The chemicals that enter from holes in the infrastructure (and get absorbed by softer pipes) can then get dragged through the system by firefighting operations.”

Kris Isaacson, a third-year doctoral student, started working with Whelton and his team the summer after the “Camp Fire” of 2018 in Paradise, California but only traveled with Whelton for the Marshall Fire of 2022 in Marshall, Colorado.

“There are just so many ways that I never would have thought that following a fire, your water system in particular is vulnerable,” Isaacson said. “You burn a house down, there’s so much different stuff in it like batteries, stoves and microwaves.

“You’re looking at heavy metal contamination in the soil at that point. So I think in Colorado, they’d remove either six or nine inches of topsoil for every house in the damaged area.”

Whelton said he and his team typically take six to 10 days to go to a contaminated site and get an idea of the situation, meet government officials, relief program officials and utility companies, collect water samples and assess the plastics being used for the water systems.

The team then flies back to West Lafayette to analyze the water samples, as well as the plastics, to assess contamination levels. In Santa Rosa, there were 40,000 parts per million of Benzene, a chemical produced naturally from things like volcanoes and forest fires.

Benzene has been linked to leukemia and other cancers of blood cells, according to the American Cancer Society. They estimate that the max exposure to Benzene per week should max out at 10 million ppm, well below what was in the water system of Santa Rosa.

Whelton and his team use this information to report back a number of suggestions to officials as well as environmental consultants to translate to the city officials.

The lab in West Lafayette tests different types of plastic pipes, all commonly known to be used for water systems, to provide better information on how a city’s water systems’ piping may have reacted to the fires.

Starting the conversation between multiple sources of relief to establish an agenda is top priority for any location, he said. Whelton first traveled to Marshall, Colorado to talk through the status of recovery with several other professors from Colorado University-Boulder and Oregon State University.

“(Whelton gave his) thoughts on what should be done, gave input on what he’d seen in the past, put him in contact with other utilities that have undergone or been exposed to similar disasters,” Isaacson said. “The goal is to just get people talking, communicating with people that have dealt with (wildfires) before.”

Both Whelton and Isaacson brought up the lack of common knowledge about water not being safe for consumption after a wildfire.

“It’s assumed that if water comes out of the faucet, it’s safe,” Whelton said. “But the utility industry doesn’t have the playbook on how to respond to these types of disasters.

“The (Environmental Protection Agency) generally doesn’t do research on disaster-type issues like this. And the states don’t do research at that privacy agency level.”

The federal government doesn’t have mandates on contaminated water coming from private wells.

“Owners fall in this weird spot where you’re not covered under the Clean Water Act because you’re not a water utility,” Isaacson said. “So if your water is contaminated, you can drink it, because it’s your decision.”

There are many different components to wildfire recovery, out of which clean water is just one. Whelton and Isaacson both agree it deserves more recognition as soon the water system becomes compromised.

“I wouldn’t have known that five years ago, after a wildfire, we need to be worried about your water,” Isaacson said. “(The water) is underground so how would people just know that would be an issue?”

The impact of the team’s work

The need to have disaster recovery information available to the public on how to enact recovery measures is more important than ever, due to the amplifying destruction occurring from climate change.

The Marshall Fire in January, Colorado’s most destructive fire in history, prompted Whelton’s most recent trip.

He and the team were shocked to find that they were not only well received by Marshall officials, but Colorado had already enacted Whelton’s findings for private homeowners to assess contamination in their wells.

“We did well testing funded by the National Science Foundation and we found contamination,” Whelton said. “We contacted the state, the state created fact sheets (for) the entire state, just because of what we found. Then we turned around, and were able to give those fact sheets to the homeowners about the contamination. They followed (our suggestions) to the tee.”

Marshall is one of several cities that have adopted the findings and testing standards that Whelton and his team provided.

“That’s one of the reasons why we keep going to these sites because we know it’s a data rich environment,” Whelton said. “If we can get that data and process it, we can then turn it around rapidly to decision makers, and they can use it to help people today instead of two and a half years later. A lot of what we do is turn the data around rapidly with the homeowners testing.”

Issacson said it takes a lot of energy to manage a crisis like a wildfire.

“I got involved with (Whelton) because he does a great job meshing the laboratory stuff with the real world applications,” Isaacson said. “I’m a graduate student, I’m just learning. But seeing all of these people that jumped to action in different ways and just how they organize themselves, all working together, these different departments that maybe never had any interaction before.

“I can’t imagine the weight they might feel on their shoulders. Being the people that have to make decisions for their community. To bring it back to what it was.”