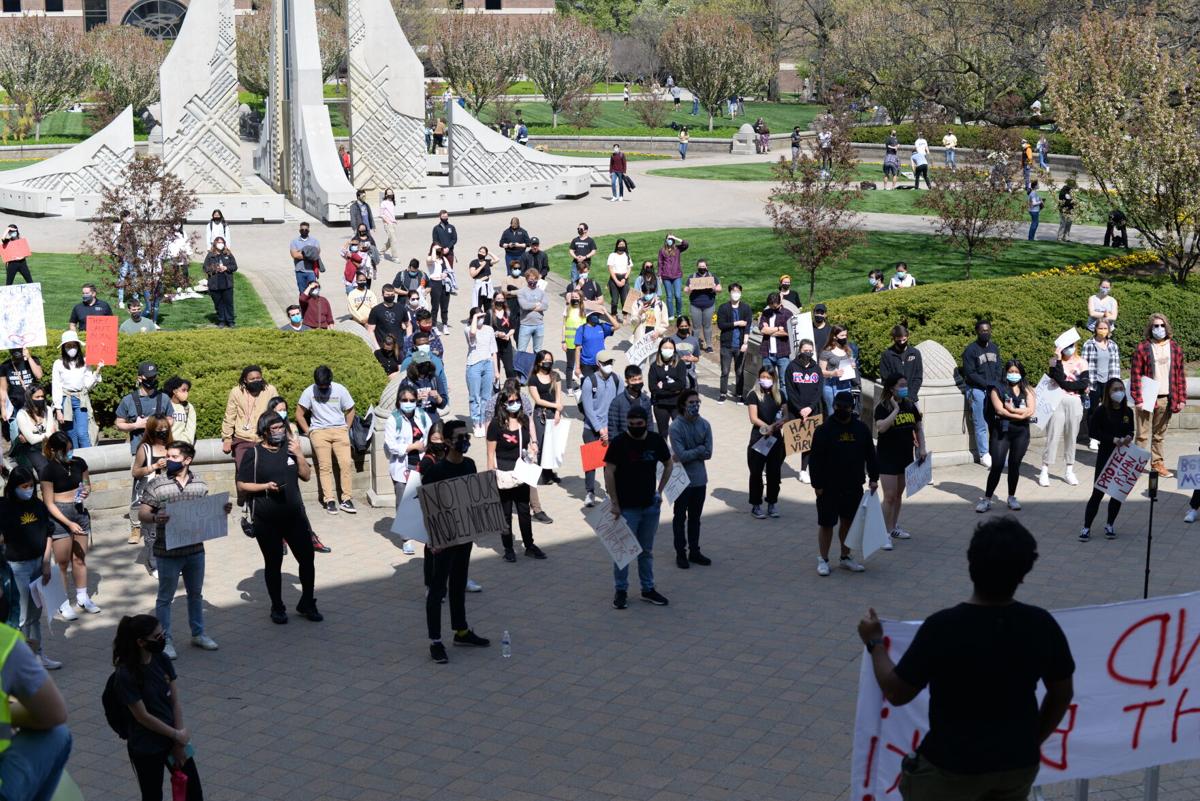 The gathered students give their attention to the speakers on the steps of Hovde Hall. 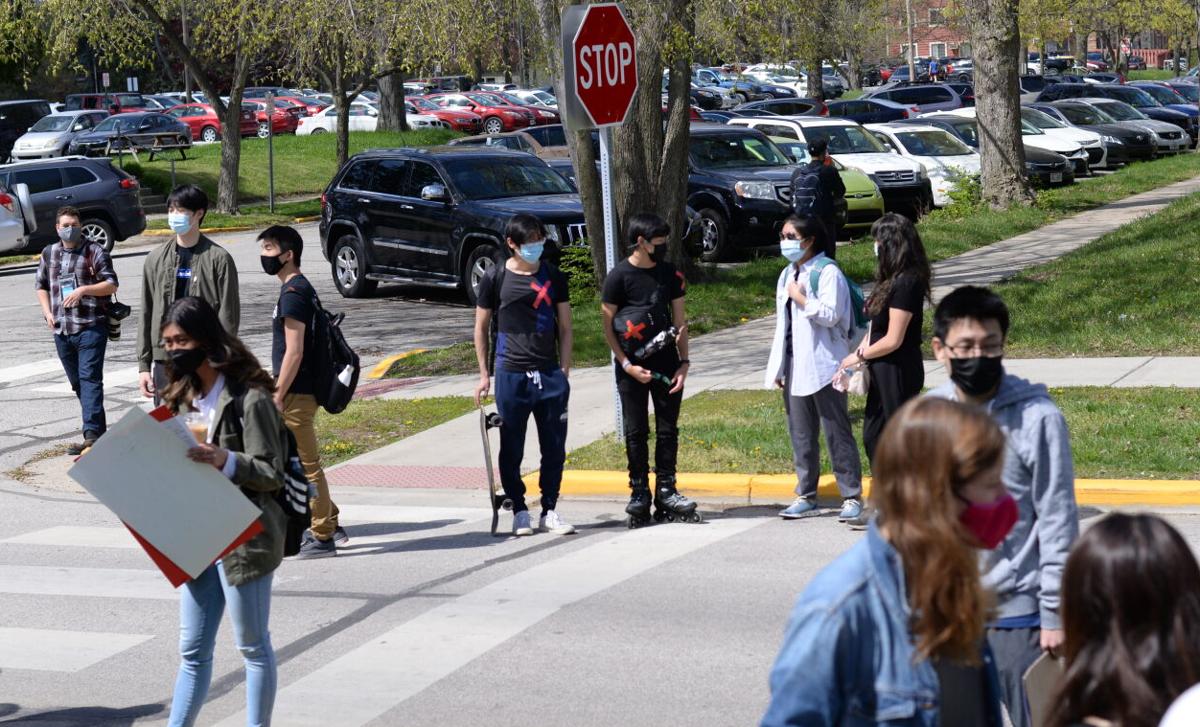 Volunteer medics, indicated by red "X" on their shirt, remain on standby throughout the protest to ensure participants do not get injured or dehydrated. 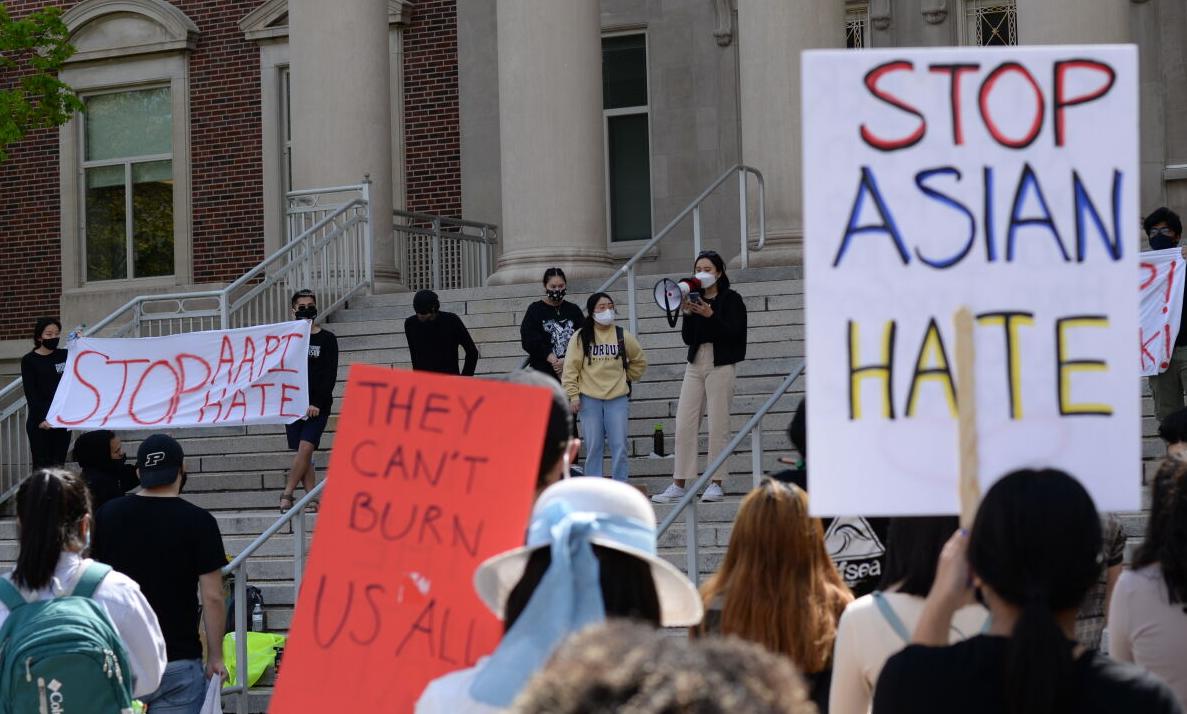 Purdue Student Government President-elect Shannon Kang speaks to protesters at Hovde Hall about her personal experience as a member of the Asian American community. 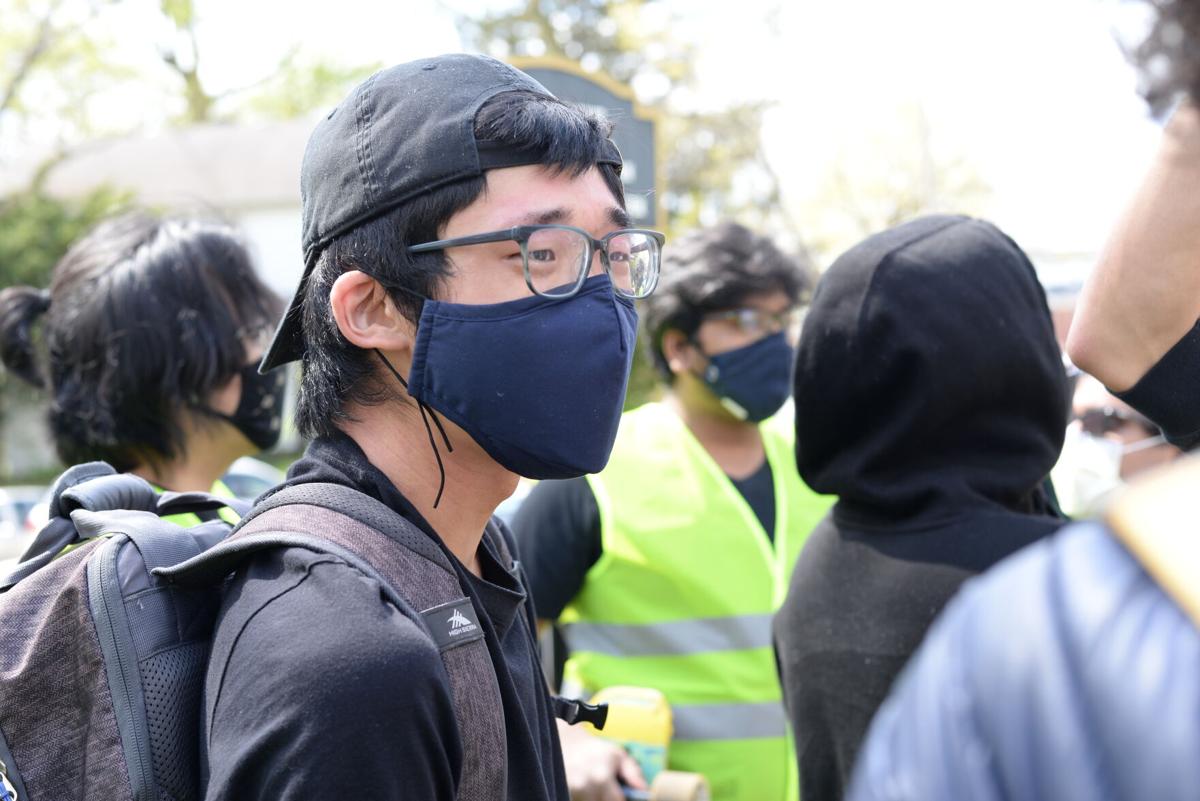 Brian Lee, a sophomore in computer engineering, speaks to other event organizers before leading the march from the AAARCC.

Protesters occupy a lane of traffic as they march down Russell Street.

Organizers of the protest speak about their connection to the Asian American community and their feelings about recent hate crimes.

The sidewalk in front of the Asian and Asian American Resource and Cultural Center bustled with people as marchers prepared to embark on their route.

The Asian American and Pacific Islander Solidarity Rally’s crowd stretched halfway down the block as it departed the AAARCC.

Marshals in bright-green vests led the group down their route while medics wearing X's made of duct tape on their clothes darted through the crowd, offering water to the marchers.

The crowd left the AAARCC and marched down Russell Street and State Street before arriving on the steps of Hovde Hall.

“We’ve all been following the news, we know what’s been happening over the past year, the rhetoric, the hate, the violence, but we’re tired of it. And at the end of the day, we’re here to say that we’re tired of the silence,” said Brian Lee, a sophomore in computer engineering and one of the rally’s organizers.

Lee said the turnout from the community and the student organizations at the rally was “beautiful.”

“We’ve seen that there’s a lot of hate towards the Asian American citizens and if I can help people, then I will do what I can to help out,” said Lin Silver, a junior in the College of Science.

Silver, who skated to the side of the crowd on a pair of rollerblades, said the job of a medic was to “ensure that everyone was being safe” and help someone if they fell, became dehydrated or were injured.

Silver said he is CPR and first-aid certified and had helped train the other medics at the events.

As the crowd took a sharp left turn onto Russell Street, green-vested marshals formed a wall blocking oncoming traffic to ensure that the march was not disrupted by cars.

Ethan Chang, a freshman in the College of Engineering, was one such marshal.

Chang said the job of the marshals was to make sure the protesters were safe from any outside disruptions.

The marshals had been trained to “separate the protest world from the outside world” and had rehearsed the route before the event, Chang said.

Though the crowd was mostly students, Dwaine Jengelley, a clinical assistant professor in the Honors College and director of the visiting scholars program, also marched with the group.

“The University has to reaffirm and support and continue to push back against hate in all forms,” Jengelley said.

Purdue should listen to its students because they have “a unique perspective,” he said.

“Every time we move forward, there are always steps back. We have to live together as citizens, but there are also some structural realities that require intervention, that require government policy.”

As the marchers approached Hovde Hall, the crowd congregated at the bottom of the steps where organizers and student leaders spoke to the crowd.

Lee delivered a list of demands to Purdue’s administration from the steps. The demands asked for an official statement from Purdue President Mitch Daniels and Provost Jay Akridge condemning anti-AAPI hate, clear guidelines for defining and responding to hate crimes and more faculty hires for scholars of color in all campus departments.

Kang addressed the crowd with a speech.

“The blame is never on the flamethrower," she said. "It’s always on the tree that was in the wrong place at the wrong time."

As the rally drew to a close, Lee instructed protesters to peacefully disperse in accordance with COVID-19 protocols governing large gatherings.