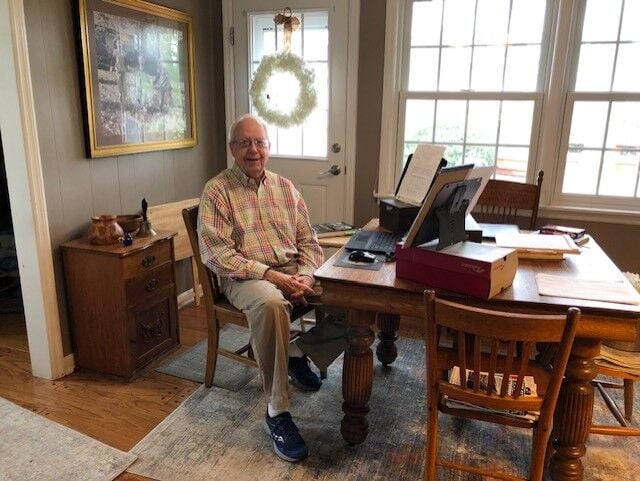 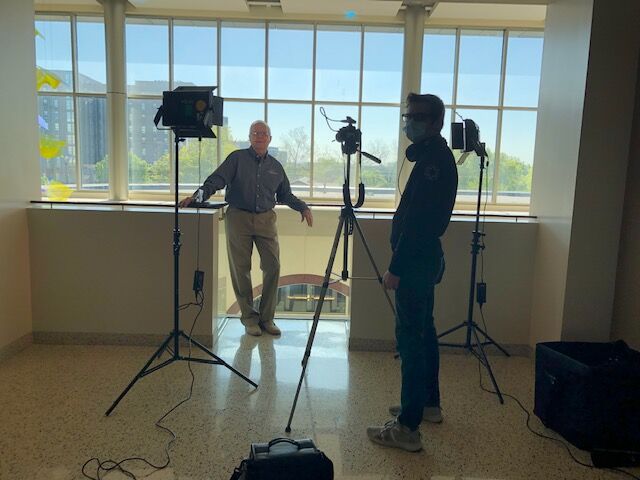 John Sautter and his cameraman, Michael Fairchild, pose for a photo during a shoot of Tuesday Tours.

John Sautter and his cameraman, Michael Fairchild, pose for a photo during a shoot of Tuesday Tours.

The Purdue Alumni Association announced on its Facebook page last week that its ‘Tuesday Tour’ — a video series highlighting historic landmarks around campus - was coming to an end after 92 installments. Comments on the post then began flooding in.

“My son currently attends Purdue and these tours helped me get a glimpse of the campus each week as an out of state parent,” one comment read.

“Have really enjoyed the Tuesday Tours. So many things I never knew when I was on campus. I looked forward to each new tour and think that the tours kept many Alumni more connected than we've been in years,” read another. “Congratulations John on a well earned retirement!”

The ‘John’ in question is John Sautter, host of the Tuesday Tours. After 50 years working at the University - the first 39 as housing and food service vice president, the last 11 working for the alumni association- Sautter is retiring, and the Tuesday Tours are going out the door with him.

Sautter said the tours, which began in July 2017, initially started out as impromptu lunchtime walks around campus with fellow staff in the alumni office. Because he’d worked at Purdue for approximately half-a-century, Sautter said he felt comfortable showing the mostly young and new staff members around the school and filling them in on its history and traditions.

“I would point out, you know, different landmarks and traditions and symbols and all this other kind of stuff,” Sautter said. “And then finally, somebody said ‘you know, maybe you ought to video these, other people might be interested in seeing them.’”

And that’s what Sautter did. He used what he calls “casual technology,” an iPhone, to record in the Great Hall of the Purdue Memorial Union while he narrated.

Sautter recorded that initial tour on Facebook Live so viewers could comment and ask questions. As viewership started to grow - from 2,000 viewers on his tour of the PMU to 3,000 when he visited Pappy’s Sweet Shop two weeks later - Sautter and the alumni association decided to make the tours a permanent venture, settling on recording one every other Tuesday morning. Tuesday Tours was born.

Now, 92 tours and more than four years later, Sautter and his bi-weekly expeditions around campus have become a staple of the Purdue community. Sautter said they average about 6,000 views per video and once hit a high of over 20,000 on a tour of Purdue Village.

Over time, Sautter’s developed a set of criteria for each tour. Each video should be around 10-15 minutes long, and each potential touring location has to have some sort of historical perspective to it while also remaining familiar to viewers and, hopefully, could be somewhere they could walk to while on campus.

“Predictably, anything I do in the Union Building, people really respond to, you know, because they've been there,” Sautter said.

Sautter said the production process for each video has gotten more streamlined as time has gone on, though they still shoot on an iPhone. The degree of difficulty in each production is high, too, because Sautter insists they shoot everything in one take.

“People sometimes ask me if we have a bloopers tape, well, we don’t have any bloopers because we record everything!”

From a visit to the armory detailing how it was once a meeting place for alumni fish frys to an aerial exploration of campus from the cockpit of a Purdue Flight School Cessna, Tuesday Tours have informed its viewership of all the ins-and-outs of Purdue’s vibrant and varied campus and history. While Sautter provided a wealth of the information presented in the videos from his experiences at the University over the last-half century, he had to learn more as the tours went along.

“They do take more and more research,” Sautter said. "Looking through old Debris (yearbooks), looking through all the alumnus magazines, and there’s two or three books I really rely on.”

He listed a few, all comprehensive looks at Purdue’s history: John Norberg’s ‘Ever True’, Robert L. Topping’s ‘A Century and Beyond’ and a John Purdue biography by Robert C. Kriepel called ‘Midas of the Wabash’.

Through his research, Sautter has become a bit of a historian himself.

“I’ve practically memorized all these books,” Sautter said with a brief chuckle.

Michael Fairchild, a multimedia designer for the Purdue for Life Foundation who’s acted as Sautter’s cameraman since January, 2020, said he’s learned a lot from working with him.

“I graduated from Purdue but I didn’t even scratch the surface on the lore and history that surrounds us,” Fairchild said. “But I learned something every time we shot the tour.”

In his time on campus, Sautter said the biggest change he’s seen has been technological. When he first started, students had to eat in their own dormitory cafeteria and had to wait to use a payphone to call home once a day. Now, students can eat wherever they want using their IDs and they can call or text home whenever with their smartphones.

Besides that, Sautter said some things have stayed the same and will continue to.

“We do a video every fall of move-in,” Sautter said. “The leaving behavior - Dad shaking hands, Mom giving hugs, people crying and getting homesick - all of that is students still being students.”

One of Sautter’s favorite tour memories happened during one of his golf cart tours during homecoming, when he happened to drive past his then-freshman grandson while filming.

“(He was like) ‘Grandpa! What are you doing?,” Sautter said.

Sautter said the alumni office works in the engagement business, and it's their job to encourage alumni to remain involved and interested in the goings-on around the University. He said the tours act as a reminder for its viewers of their own memories on campus: a time when they walked to class in frigid weather or when they had to take a test in the armory.

Though Sautter is hanging it up after 50 years on campus and four years making Tuesday Tours, he’s grateful for the experience and for the warm wishes from the alumni community.

“It’s just been a blast doing these,” Sautter said. “People love to hear the history and hear the stories, and the comments they make are just really quite touching.”

His final tour, which aired last Tuesday, focused on Harvey Wiley, Purdue's first chemistry professor who also dabbled in ROTC instruction and coached the baseball team. At the video's close, Sautter, standing in Wiley Hall, pointed to an office door behind him. It was where he started working when he first arrived on campus in August 1971.

"I've been here for 50 years, one way or another, hopefully making a difference, but being associated has just been such a highlight for me and I'm indebted to so many people along the way," Sautter said.

The video ended with a slideshow of photos of Sautter conducting the tour throughout the previous four years. 'Hail, Purdue!' - his favorite song - played in the background.