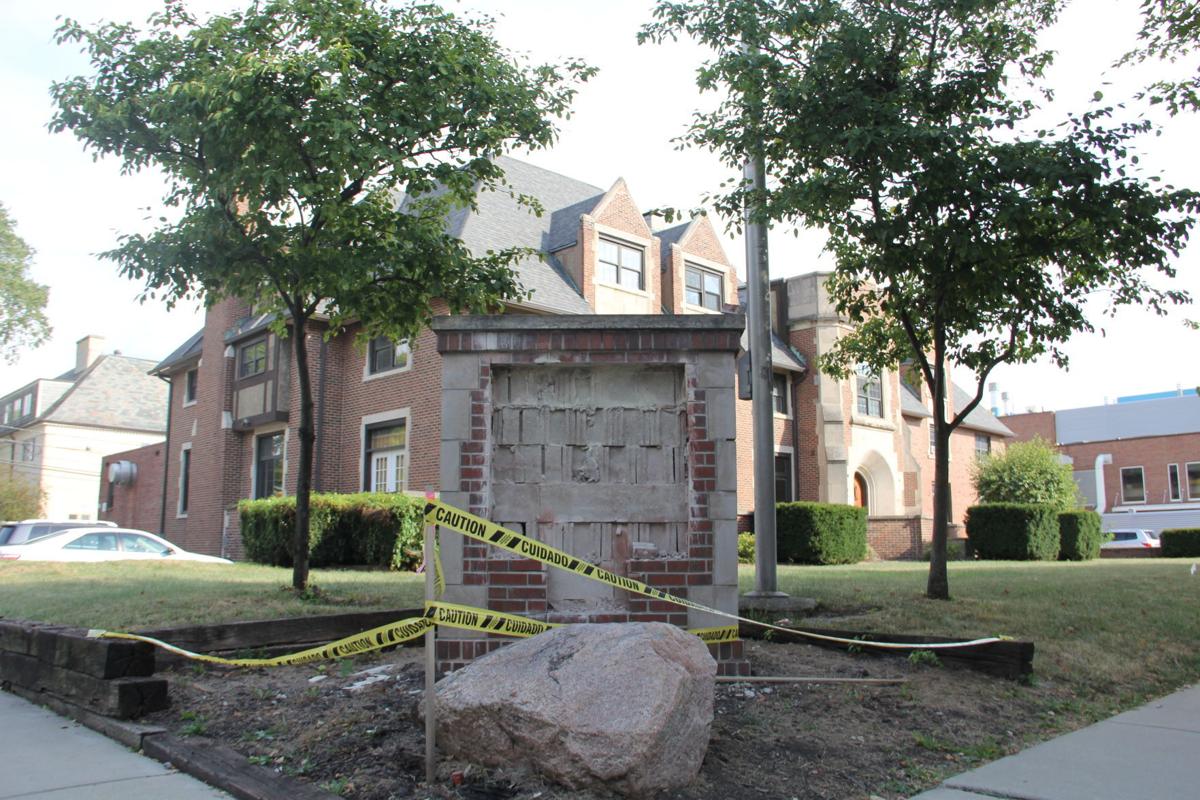 A sign that formerly said “Alpha Tau Omega” has been chiseled away and caution tape has been put around it. 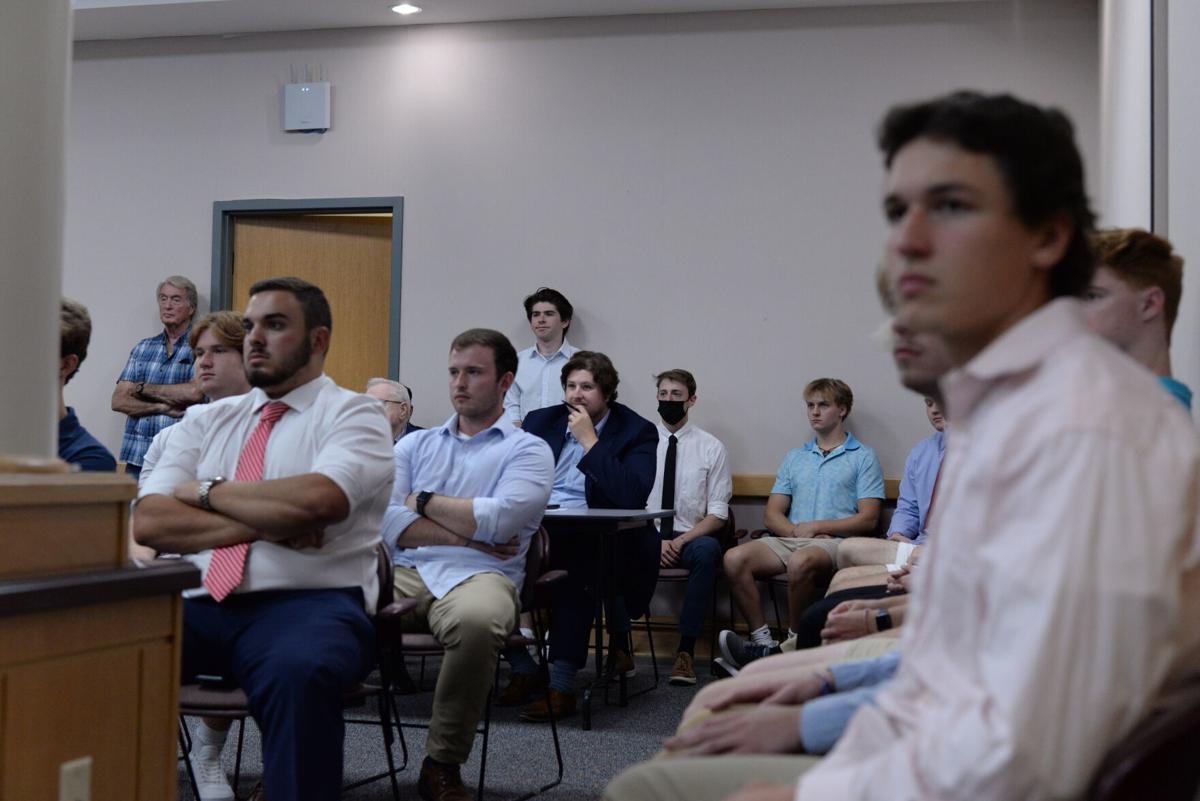 Members of the Alpha Tau Omega fraternity listen to the attorney representing the third-party petitioner at the Area Plan Commission. 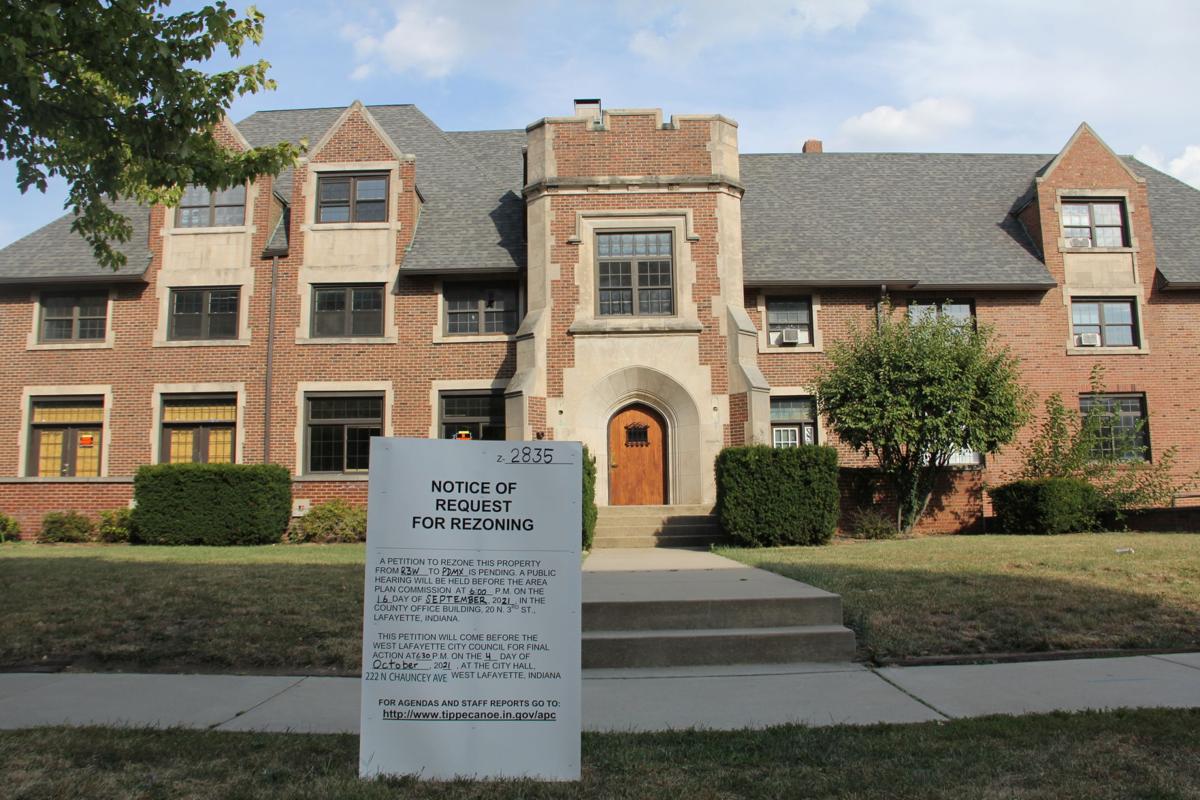 A notice of request for rezoning stands in front of the old Alpha Tau Omega House on Russell Street.

A sign that formerly said “Alpha Tau Omega” has been chiseled away and caution tape has been put around it.

Members of the Alpha Tau Omega fraternity listen to the attorney representing the third-party petitioner at the Area Plan Commission.

A notice of request for rezoning stands in front of the old Alpha Tau Omega House on Russell Street.

The battle over the former Alpha Tau Omega house, which has been recognized as a historic site, is one between progress and tradition.

PCM Properties LLC, owner of the land the house sits on, recently submitted a development proposal with plans to demolish the house and replace it with a mixed-use building.

The plans for the building, similar to some other nearby apartment complexes, include a 31-space, ground-floor parking garage, 51 housing units and ground-floor retail space.

Purdue general counsel Steve Schultz said at an Area Plan Commission meeting last week that Purdue opposes this proposal since it goes against the “long-term neighborhood stability” its master plan intended for the area.

Attorney for PMC Dan Teder said at the same meeting that Purdue was on board with the proposal at one point.

Teder said during the six months to a year that the plan was being developed, Purdue knew about the plan and both architects and University Residences approved of it.

“Purdue is screaming for having apartments,” Teder said. “They don’t have enough room for anybody. This is something Purdue housing has said they wanted because of that. The attorney now comes, a year later, and says they don’t like it.”

Teder also said the owner had problems in the past with the fraternity.

An online user who goes by “Mitch” spoke about the breakdown of the relationship between PCM and ATO in an August 2020 post to the PCM profile page on the Better Business Bureau website.

PCM significantly increased the lease rate before the Fall 2020 semester, Mitch said, which put a lot of brothers, who were already struggling financially because of the COVID-19 pandemic, in a difficult situation.

“Increasing rates at this time ... is just the opposite of what most businesses have been doing for their clients and is an absurd measure to take advantage of the chapter, the brothers and the house in which the chapter has resided in for a century,” he said.

The Exponent couldn’t confirm a change in lease rates, and ATO couldn’t be reached for comment after the APC meeting last week.

After being advised by the national ATO headquarters and the national board of trustees to “absolutely not” sign the lease contract, the chapter’s executive board said they “could not in good faith sign off on such an unjust and harsh contract.”

“Both the National Alpha Tau Omega HQ and National Board of Trustees advised the chapter to absolutely not sign PCM’s proposed contract(s),” Mitch said.

President of the Purdue ATO chapter Kiernan McCormick said both alumni and the National ATO Headquarters weighed in on the decision of how to move forward with the house.

He said the situation was out of ATO’s control.

“The alumni that owned our home (Mike Cates, PPC Properties owner) decided it was time to do other things with the property,” McCormick said in a July email. “This decision was not shared by the chapter, the alumni or the National Headquarters, however it was out of our control legally.”

Teder said disciplinary sanctions against ATO were part of the reason PMC wanted to end the relationship.

The fraternity was sanctioned twice over the past two years for hazing, alcohol and Protect Purdue violations, according to the Office of Student Rights and Responsibilities website.

The Protect Purdue violation came in January when ATO threw a watch party for the first basketball game of the season that violated the Protect Purdue Pledge and the Code of Student Conduct, according to previous Exponent reporting.

ATO brothers, among others, have voiced dissent, saying the house contributes historical significance to campus.

The house, built in 1920, was added to the National Registry of Historic Places in March 2002. The mansion’s special historic significance is its architecture, which “embodies the distinctive characteristics of a type, period or method of construction” of the 19th and 20th century Tudor revival, according to its registration form.

Indianapolis-born architect Robert Frost initiated into the Pennsylvania ATO chapter in 1895 and designed the mansion that came to be known as the Maltese Manor, according to the registration form. The house was erected for $28,000 in the summer of 1920 by Purdue and ATO alumni.

McCormick said the proposed development would remove the historic element of the property.

“The architecture will compromise the way in which the campus has been for all of Purdue’s history,” he said, “and it will make a change in how Purdue’s history is seen in the future, as well.”

Although the building is nationally registered, it’s not protected by the Historic Preservation Commission, Teder said. The Exponent didn’t receive comment from the HPC about the significance of the former ATO house or the extent of its local protections before Sunday evening.

In the Facebook group “Preserve Historic Lafayette,” community members and others expressed disdain at the possible demolition.

“Even if you remove the Greek factor, these (buildings) are Purdue history and as such were very recognizable pieces of the total Boilermaker campus! It’s such a shame these ‘corps’ can come in and change the face of a place,” she said. “Campus needs its old buildings for the continuity of a storied history!”

The rezoning request will now go to West Lafayette City Council for approval with the recommendation from the Area Plan Commission. The final decision will be made on Oct. 4 at West Lafayette City Hall, according to the sign posted outside the old house.