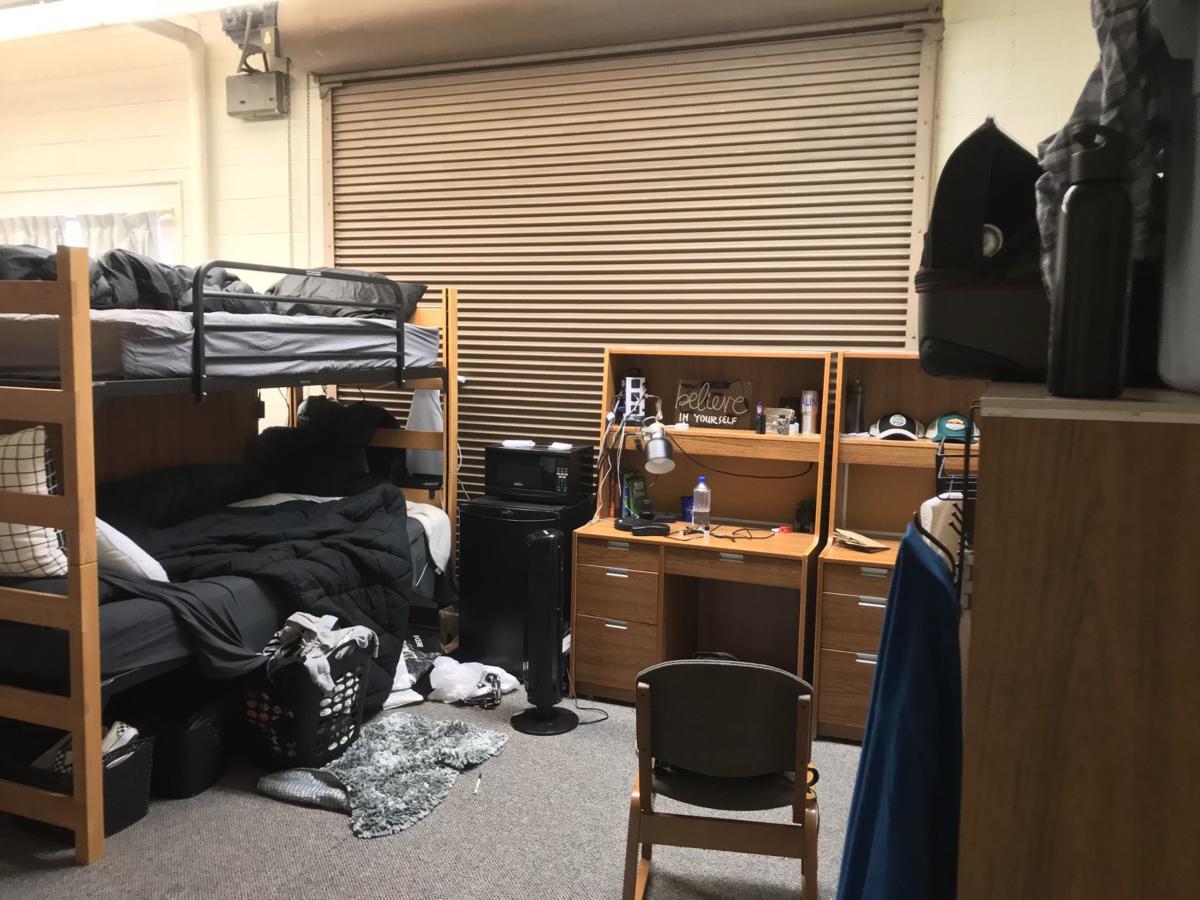 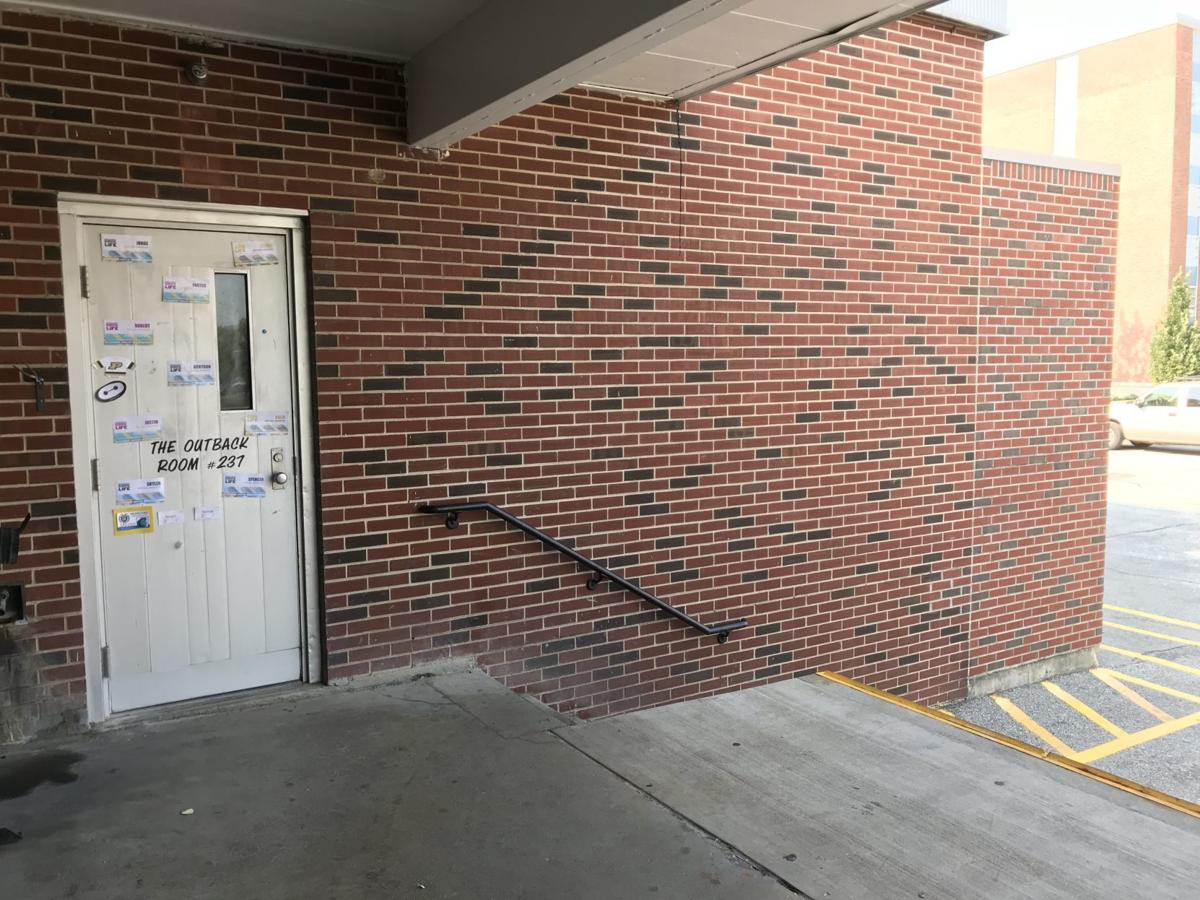 In 2019, ten men were housed in this unit located on the backside of Harrison Hall near the loading dock of the residence hall.

In 2019, ten men were housed in this unit located on the backside of Harrison Hall near the loading dock of the residence hall.

In 2013, 32 incoming students at Purdue lived in temporary housing at the start of the semester, and were moved into permanent housing by the second week of classes.

This year, over 120 beds were created for auxiliary housing, not counting those put in Purdue Village or the Union Club Hotel.

Temporary housing is necessary because of the surplus of students Purdue enrolls. As students drop out over the course of the first semester, or simply fail to show up at all, those in temporary housing can gradually leave their makeshift rooms.

"There is high demand for a Purdue education and for campus housing thanks to our unexpected success in yielding admitted freshmen and unprecedented interest among all students to live on campus," she said. "Rather than living off campus, several students have chosen to live in temporary or auxiliary spaces while they wait for permanent space to become available. Most of those in temporary space will be moved to permanent rooms within the first few weeks of the semester."

The conditions of what University Residences calls “converted space in residence hall” varies. The more densely populated versions, fitting eight to 10 people in each room, have been compared to “bunkers,” “prisons” or “halfway houses” on Twitter. The more common smaller rooms fit one or two people, and are scattered across campus.

Alex Wood, a freshman in the College of Science, has a few ideas on what his converted single was before becoming his dorm room.

“I am in the seventh floor of Shreve,” Wood said. “I’m right next to the elevator, and I think they took a closet and kind of turned it into a temporary dorm room. It kinda looks like that inside.”

Wood said he doesn’t mind being placed in auxiliary housing, though.

“It was cool, cause I got to kinda play Tetris a little bit with my room to see where everything fit (on move-in day),” he said. “It’s comfortable, it’s not to the point where it’s unbearable to live in, but it’s definitely smaller than the rest of the dorm rooms.

“But I know that they’re working hard to get people out and into actual permanent spaces, so I’m just kind of waiting for an email, for them to tell me where I’m going to be living.”

One kind of temporary housing on campus involves students living in rooms constructed inside the loading docks of residence halls.

Skyler Svanda, a freshman in the College of Engineering, lives in the back of Harrison Hall with nine other male freshmen.

“I found out (I was in temporary housing) two weeks after I applied to housing,” Svanda said. “I did it two weeks earlier than I should’ve and I still managed to get temporary housing. But some other people just applied the day before so that was kinda weird to me.”

“It’s not a problem, we’re actually glad to be here because we bonded, we have grown accustomed to one another’s schedules, and we’re all a pretty good set of people. I think we could make this work, indefinitely, throughout the entirety of the year.

“They told us, like two weeks into the year, or October-ish, would be the max,” Svanda said, regarding when he and his roommates would be placed in permanent housing.

Other than being placed in a room that might’ve been a broom closet or storage room in the past, several students were placed into apartments at Purdue Village. Traditionally, Purdue Village is utilized as housing for students who are married, in graduate school or living with their families on campus.

“It’s honestly not that bad, like the living situation (here),” Price said. “Temporary housing, that’s bad. Where we live is not that bad. Just sucks, the Wi-Fi doesn’t work so you don’t get internet.”

“It’s probably overwhelming for a freshman,” Van Zant said. “It’s like a 20-minute walk just to campus, then like another 20 minutes in, and it’s like ‘I don’t know where I’m going.’”

In regards to those in converted living spaces, like the rooms featured in a recent BuzzFeed News article using The Exponent’s pictures, Price has a few thoughts on the housing situation.

“I think it’s kinda ridiculous. I don’t think they should have to pay for it, if they are having to pay for it,” she said. “If (Purdue) knew that this was going to happen, they shouldn’t have taken in that many excess students.”

The concept of temporary housing isn’t unique to Purdue — Indiana University is also experiencing an influx of more freshmen than it can house.

A recent Indiana Daily Student article explains that as of Thursday, 157 students are “without permanent assignments.” Bunk beds set up in the lounges of several dorms provide room at 80 percent the price of normal rent, according to an IDS report, for the large freshman class.

Some freshmen in Purdue's record-breaking incoming class were informed in a Thursday email that despite meeting the housing deadline, they wil…