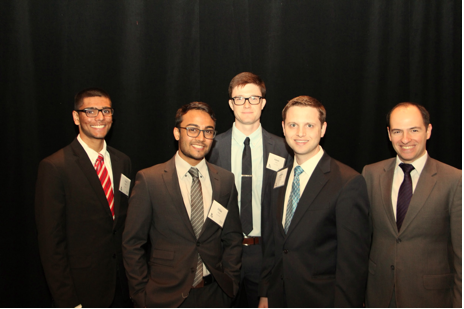 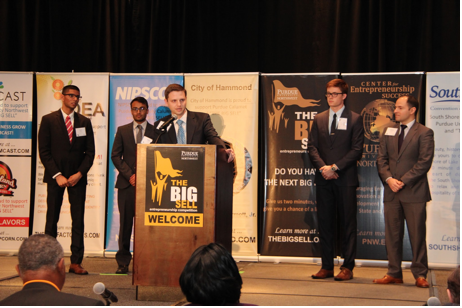 Jon Merrell, a Purdue PhD student, gives an acceptance speech on behalf of his Big Sell team. The team placed second in the Big Sell Entrepreneurship Competition at Calumet’s campus on April 16.

Jon Merrell, a Purdue PhD student, gives an acceptance speech on behalf of his Big Sell team. The team placed second in the Big Sell Entrepreneurship Competition at Calumet’s campus on April 16.

The team competed in the Big Sell competition, which was created to offer people the opportunity to put their dreams into action. Each accepted applicant is given two minutes to sell their idea to an audience that electronically votes for the best ideas.

Merrell, the team spokesperson for the competition and first-year PhD student in the biomedical engineering program, said many of the components that went into creating the team’s idea came to him over the course of last summer, but it took several months of brainstorming and refining the invention with the team before it was fully developed.

“I was having a conversation with an emergency medicine coworker of mine at the hospital about a year ago, and she mentioned how frustrating it is for many physicians to know how to save lives, but to not have lifesaving equipment on hand for emergencies at home, at the park, or other non-clinical settings,” said Merrell.

For Merrell, there was only one solution, which was to create a bag valve mask, a device used to temporarily inflate the lungs of an individual who is not breathing on his own, that could be shrunk down and carried everywhere. The BVMs are routinely used in hospitals and in ambulances, but they are bulky, which limits their portability.

The team’s invention, The Butterfly BVM, is the world’s smallest resuscitator. It uses an inflatable bilayer to shrink the largest components of the device, and it also has a unique butterfly-knife design to give the device a slim profile. The end result was a BVM that can fit in a lifesaver’s pocket, so it can go anywhere.

Balancing coursework and extracurricular activities while preparing for the competition was difficult for the team, but the efforts of its members proved successful when they went home with the second place prize.

Prakash, a freshman in first-year-engineering who plans on double majoring in chemical engineering and economics, said that when he got the news that the team had placed second, he was overwhelmed with excitement.

“If you asked me in the fall if I thought we would have a registered company, a pending patent, a pretty awesome prototype and a lot of resources to our names, I probably would not have believed you,” said Prakash.

Nayee, a sophomore in biomedical engineering, agreed that no one on the team could have predicted they would come this far, but he is looking forward to the experiences that go with starting up a company.

“We are now looking to create a proper working prototype similar to the one that we originally visualized to be put on the market,” said Nayee.

Merrell said that placing second in the Big Sell has provided a major boost to the team’s efforts to get their device off the ground and into the hands of people who are trained to use it. Merrell also said that the four winning teams of the competition each won just under $30,000, and the majority of the money will come in the form of donated legal, accounting and marketing help.

“In the end, this award will be very helpful in covering many of the incidental costs associated with a startup while allowing us to focus on refining the product and getting closer to having a fully functional prototype,” said Merrell.