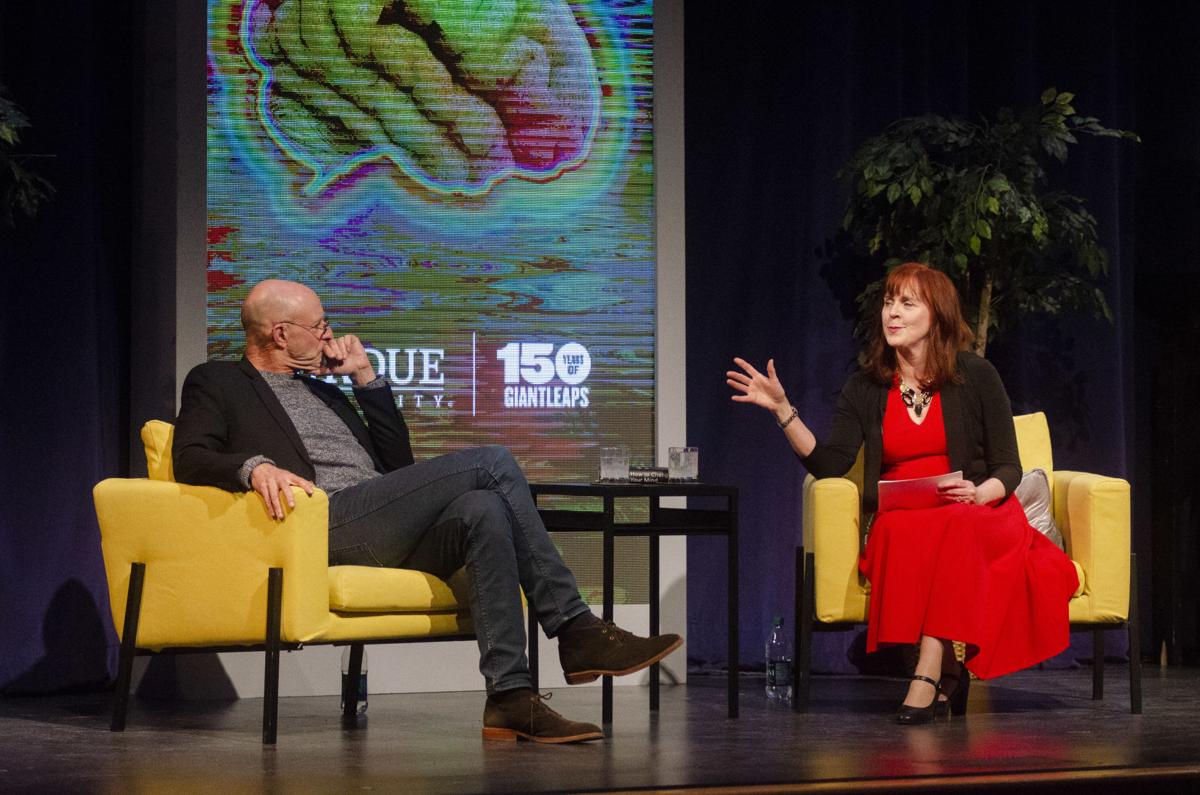 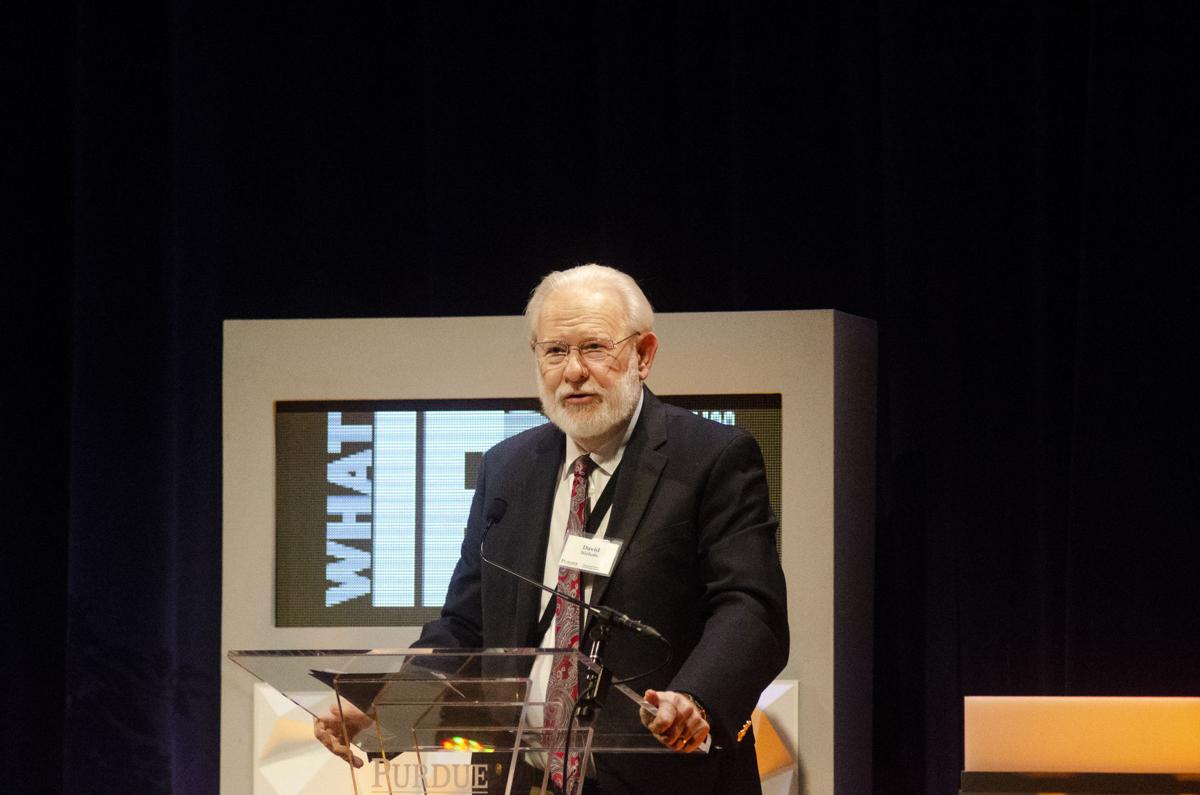 On Wednesday, the two were invited to speak at Stewart Center's Fowler Hall as part of Purdue's Ideas Festival. Nichols spoke about the progress that has been made in psychoactive drug research over past decades, and Pollan discussed some of the provocative new findings from his latest book, titled “How to Change Your Mind.”

According to Nichols, scientists at Purdue played a critical role in furthering research on psychedelics. When Nichols joined Purdue as a professor during the drug war in 1974, psychedelics had been “demonized and trivialized.” Drugs like LSD were associated with the counterculture of the 1960s and stigmatized, largely due to misinformation.

“(Many people believed) that psychedelic agents had no redeeming value,” Nichols said. “I, however, did not buy into that belief.”

In his lab, Nichols developed an MDMA (also known as ecstasy) compound for use in a clinical trial for the treatment of post-traumatic stress disorder. Remarkably, scientists saw an 80 percent total remission rate among subjects, many of whom were war veterans. There are currently no other treatments for PTSD that have demonstrated such efficacy.

Nichols also discussed psilocybin, a compound at the forefront of psychedelic research into assistive therapy for depression. Today, 16 million American adults suffer from major depressive disorder, and anti-depressants on the market are hit-or-miss, said Nichols. They are often ineffective, slow-acting and laced with undesirable side effects. In contrast, clinical trials have shown that psilocybin treatment can induce complete remission of depression for months — and sometimes even years — after just one dose. As a result, the compound has been awarded breakthrough therapy status from the Food and Drug Administration.

Pollan’s interest in the science of psychoactive drugs was sparked after learning of a clinical trial at New York University that used psilocybin therapy to address the fear of death and “existential distress” in terminal cancer patients. Pollan, who at the time was doing research for an article about psychedelic therapy, was astounded by the effect these drugs had: Several patients reported a “complete removal of the fear of death” after therapy.

Pollan became driven to understand in greater depth how people could have such powerful and spiritually transformative experiences with psychoactive compounds. Although he admitted to entering the realm of psychedelics with a “healthy dose of skepticism,” he said his doubts were eventually replaced by a strong faith that these compounds could permanently alter the landscape of mental healthcare.

Psychoactive drugs are known to suppress activity in the default-mode network of the brain, which is responsible for processing memories and emotions. The DMN provides a basis for the sense of self, also known as the ego. Psychedelics work by decreasing DMN activity and therefore essentially dissolving the ego, which, according to Pollan, is why they are thought by many to act as a spiritual gateway.

“A lot of people report what’s called a mystical-type experience,” Pollan said. “(It’s) defined as feeling like a part of something larger, (like a) transcendence of time and space.”

Pollan reflected on his own experiences taking psychedelics, which occurred in a controlled therapeutic setting as part of his research.

“I saw myself disappear — but I (was untroubled and) perceived it from a new vantage point,” Pollan recalled. “(The experience) taught me that we are not identical to our ego. … The ego is just this voice in your head trying to run the show, and you don’t have to listen to it.”

The experience changed Pollan’s perspective on spirituality during a difficult period in his life as he was faced with his father’s terminal cancer diagnosis. Pollan believes that his psychedelic experience enabled him to become more emotionally aware and fully present as he confronted the reality of his father’s mortality.

Pollan, who is a self-described former “materialist,” acknowledged the skepticism regarding the legitimacy of spiritual experiences. However, he pointed out that, spirituality aside, psychedelics still hold many benefits over traditional drugs for treating mental illnesses. Psychedelics have no known lethal doses and are non-habit forming. In addition, he maintains that using these drugs safely through guided trips provides a “radically different experience” than the wilder, more uncoordinated trips associated with recreational drug use.

Pollan did, however, caution that psychedelic usage does not come risk-free. “Bad trips” are a real phenomenon and users should be mindful of the setting and company in which they choose to consume these drugs. In particular, users with a family history of illnesses like schizophrenia and bipolar disorder are at a higher risk of experiencing drug-induced psychotic breakdowns.

According to Pollan, the FDA is likely still two to five years away from approving psilocybin and MDMA, after which the drugs will presumably be available through prescription. Obtaining FDA approval for the legalization of psychedelics can be complicated due to regulations placed on experiments with human subjects, in addition to the taboo that these drugs hold.

In the aftermath of his latest book being published, hundreds of readers have reached out to Pollan, sharing deeply personal stories of how mental illness has affected their lives.

“We still can’t say with perfect confidence that we have a cure for depression (and other mental illnesses),” Pollan said. “(But the outreach I received) acquainted me with the scale of mental suffering (that exists today), and gives me a sense of urgency about this work.”