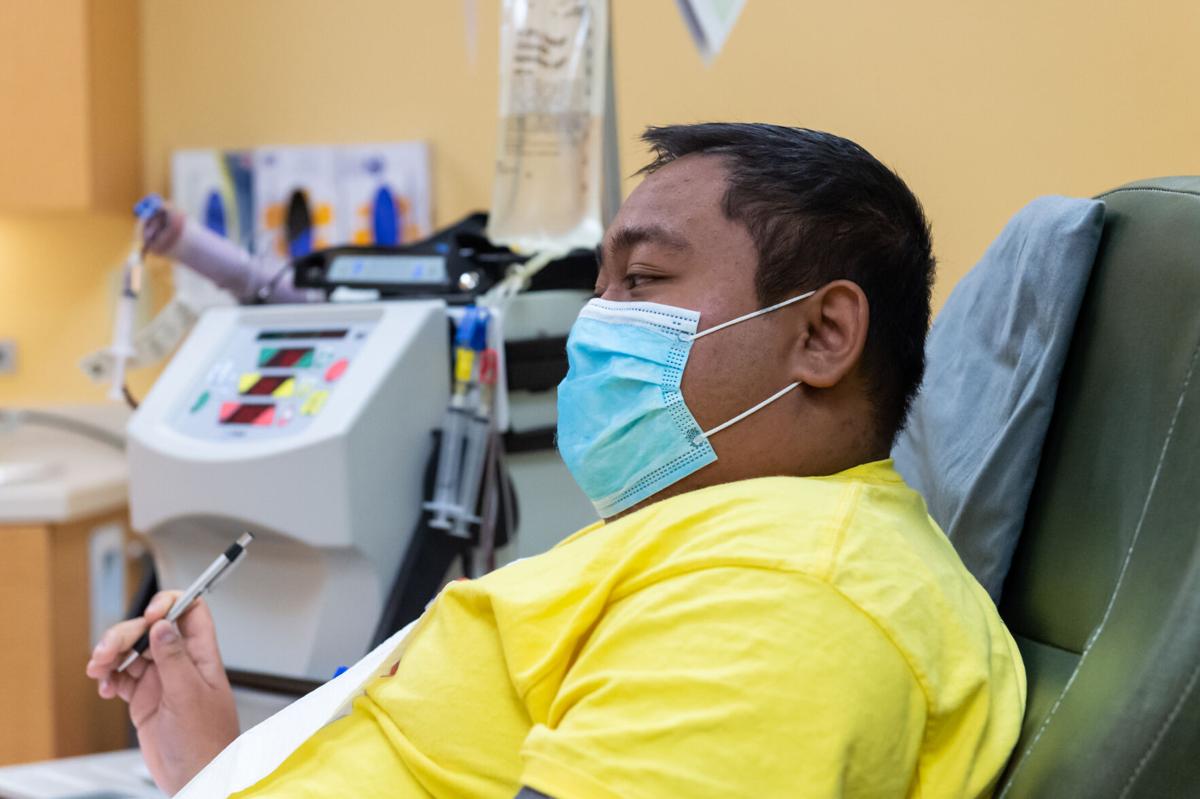 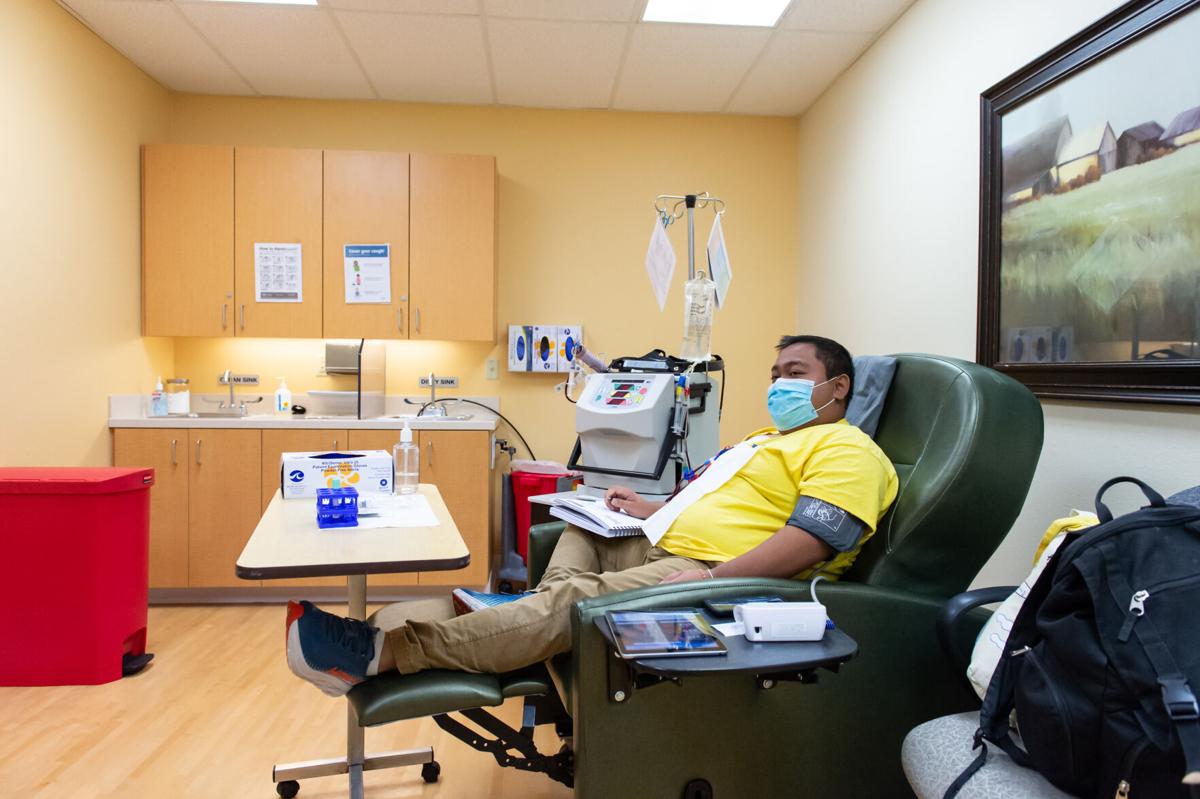 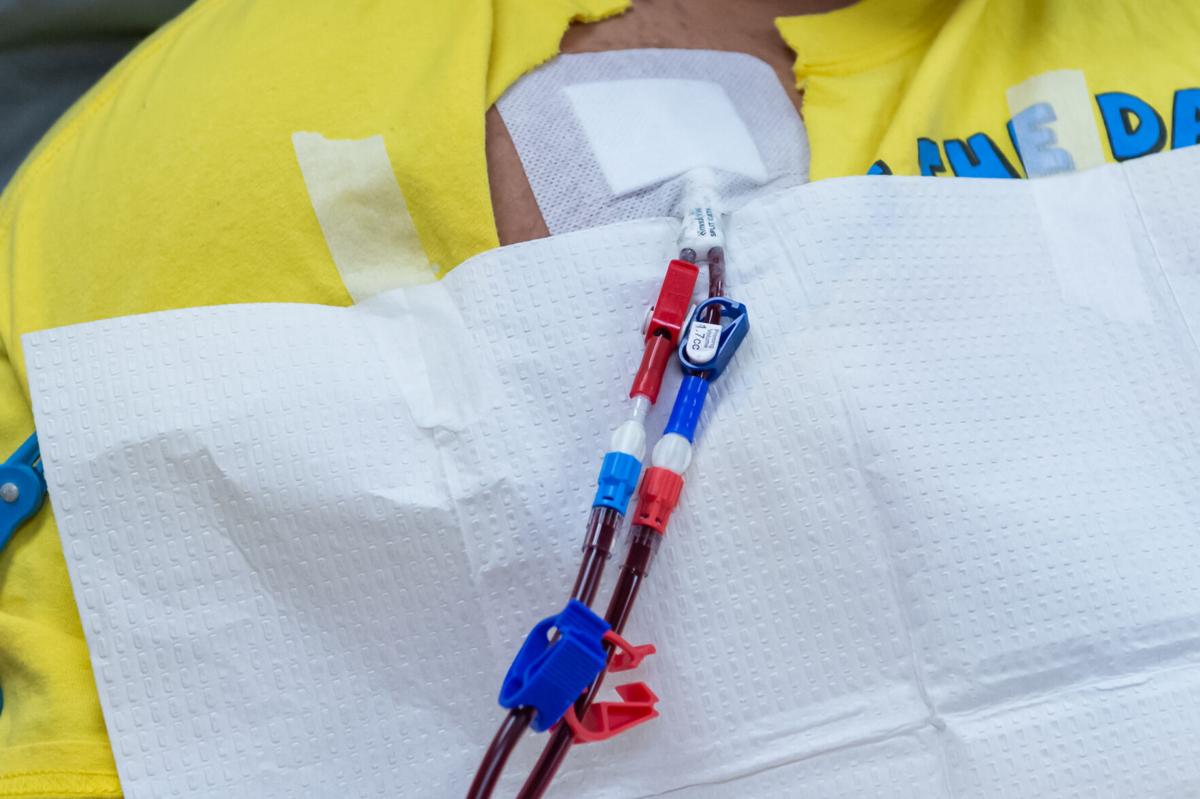 Than Win's blood is drawn from his body, cleaned or contaminants, and then returned. 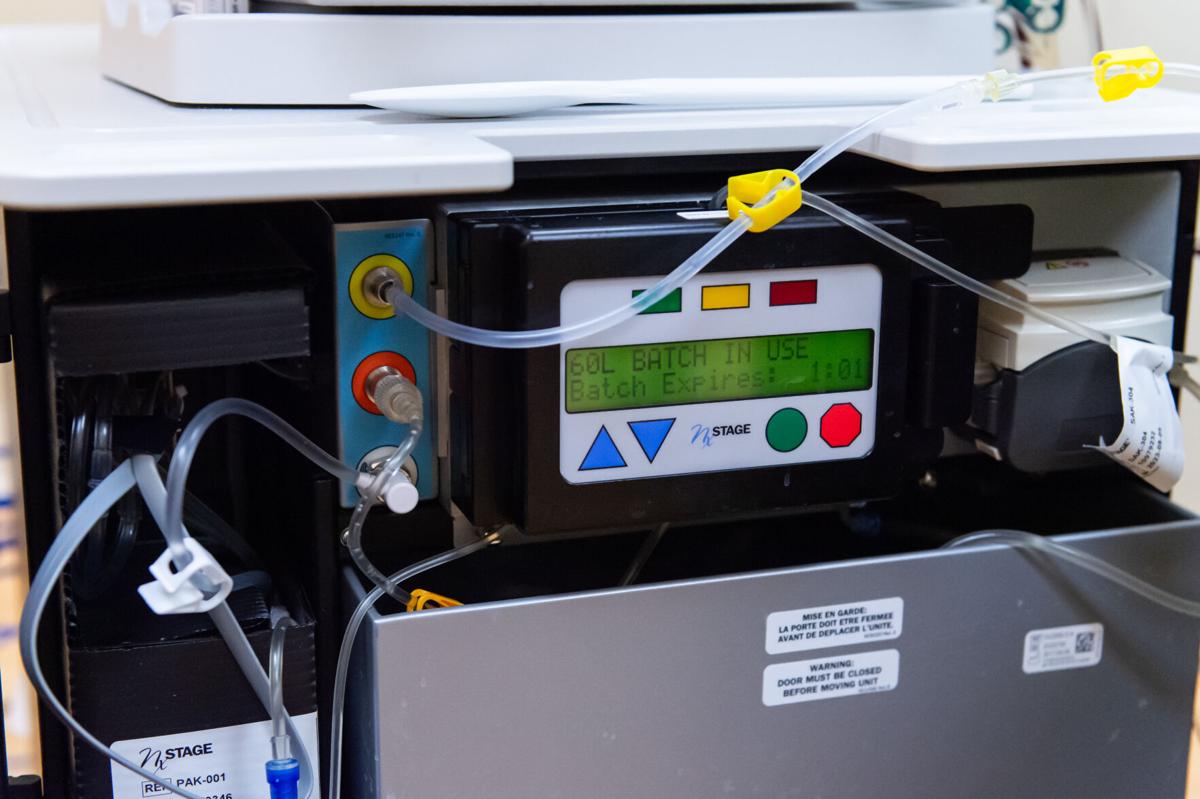 Than Win's dialysis machine works on a volume basis and runs until a set amount of blood has been cleaned.

Than Win's blood is drawn from his body, cleaned or contaminants, and then returned.

Than Win's dialysis machine works on a volume basis and runs until a set amount of blood has been cleaned.

Hooked up to a whirring dialysis machine by several thick IV lines early in the morning, Than Win presents an unusual picture for a college student. While others might spend their three-hour block of time catching up on homework or playing video games, Win spends his time learning how to treat his own disease.

When Win, a junior in the College of Science, was diagnosed with IgA nephropathy in 2015, he knew his life would be forever changed.

IgA nephropathy leads to chronic kidney disease. Win said his mission is to educate people about CKD, which he called a “silent killer.”

“I was probably born with it,” he said, “but since we didn’t catch it until later it was already too late.

“From then on, we tried to do a bunch of medications, drug therapy, immunosuppressants, guiding exercise and stuff like that to slow down the progression.”

Win said the only known treatments are kidney transplant or dialysis.

He is undergoing haemodialysis, which involves taking blood out of the body, putting it into a machine and dialyzing it with various chemicals known as dialysate. The treated blood is then filtered back into the body.

“Each session is four hours long,” he said. “It’s basically a part-time job where you just kind of sit there. I do homework most of the time, or try to take a nap if I can, but sometimes I can’t. But after each run, it’s pretty exhausting.

“The way I describe it is like you just ran a marathon after working all day, so tired the whole time.”

Ada Otero, a registered nurse and facility administrator at US Renal Care, compared the process of dialysis to “working in a factory” because of how much coordination is required.

“Most of these patients are here three days a week,” she said. “Especially if they’re younger or older, they have to figure out transportation.”

Win said the process can be draining and is harder because he has to schedule his sessions around his classes.

“I have to wake up at 5 in the morning to get to the clinic and here in Lafayette, because I had classes until about 2:30,” he said, “and they didn’t have any afternoon shifts either. So that was the only time I could do it.”

“Dialysis is an emotionally taxing procedure because (patients) have to sit there for three to four hours at a time,” she said. “Patients sometimes get really cold and tired, because up to 5 kilograms of their blood is sitting in a tank, and that depresses them.”

She said to combat this, a social worker conducts periodic evaluations on patients to assess them for depression.

Win said the mental trauma of discovering he had to switch to dialysis was difficult.

“I had this moment of realization, where the only reason I’m alive right now is because of the machine,” he said.

Win smiled ruefully as he described the day his doctor called him to say he would need dialysis.

“I had surgery where they connected my artery and vein together,” he said, pointing to a thick raised scar on his forearm. “That was to set up for dialysis and it takes about four to six weeks to mature.

“But my doctor called me two days later and said ‘we can’t wait for your fistula to mature, we have to start dialysis right away.’”

Because he wasn’t set up with a dialysis clinic in West Lafayette, Win had to drive to a hospital in Indianapolis.

“Usually, people have a little longer to think about that kind of stuff,” he said. “It wasn’t until I actually got hooked up onto the machine and I could see the blood leaving my body.

Win said his own diagnosis is a contributing factor to his decision to major in health and disease during college.

“My parents are from Myanmar, and when we came to America my mom was really sick because she had years of untreated diabetes,” he said. “I wanted to understand why diseases occur, and if we can use microbes to cure these non-communicable, chronic diseases.

“When I was diagnosed, that solidified my choice. I really wanted to go into biological sciences and understand.”

IgA nephropathy, or Berger’s disease, is a rare condition where the antibody immunoglobulin A builds up in the kidneys, leading to inflammation and difficulty processing waste from the body.

“It’s kind of like cancer,” he said. “Stage five is end stage renal failure for renal disease. And what that means is your body is filtering about 15 milliliters of fluid per minute. That means you’re in kidney failure, and you rely on dialysis for survival or transplant.”

“By the time they diagnosed me I was already stage 1B, so I was pretty much on a downward path,” he said. “I knew I was going to need a transplant at some point, but we didn’t know it’s gonna be this fast.”

Win said one of his goals is to raise awareness about CKD, because he often feels judged for not having any outward physical symptoms.

“People may not think you’re sick, because you aren’t experiencing major physical symptoms,” he said. “But there’s other symptoms that a lot of people don’t recognize.

“There’s a lot of physical things I can’t do. Although each patient is different, I struggle with walking long distances. And running is really out of the question. Climbing up stairs takes a toll on me. A lot of my symptoms are fatigue and it really is taxing.”

Aside from physical limitations, Win said the disease also affects his diet and he can’t eat certain foods.

“Foods with high organic phosphorus or inorganic phosphorus are toxic to me because my kidneys aren’t filtering that out,” he said. “I also need to limit my potassium, sodium and glucose and anything that can become a liquid at room temperature, like ice cream, fruits like watermelon or soups.”

Win is in the process of transitioning to home care, which would allow him to perform dialysis on himself. He said his public health major went a long way in aiding that process.

Because of his diagnosis, Win said that in the near future, he will require a kidney transplant, and finding a donor has become one of his biggest goals.

“I’m lucky that way,” he said, “because not everyone qualifies for the transplant list for a variety of reasons.”

Win, who qualifies for the transplant list, said both the people donating and receiving the kidney must go through an extensive list of steps before a transplant.

Some of those steps include multiple rounds of blood tests, counseling and a recommendation to the hospital’s board of directors to proceed from a medical team composed of multiple doctors.

“If you choose to get tested and if you do get approved I won’t know until the end, when the physician says, ‘Yeah, you’re a match,’” Win said. “All the blood work and tests, it’s all free of charge because it comes from my insurance company.”

Even though Win is covered by insurance, he said the process is expensive and he has to think about additional expenses for his treatment.

“The American Disabilities Act qualifies me as having a disability and because of that I do qualify for Medicare benefits,” he said. “I also qualify for traditional Medicaid so most of my prescriptions are covered right now and so is dialysis.

“However, I have been advised by much of my medical team to begin fundraising for money as I’ll have to take lifelong medication should I get a kidney transplant. Not only that, there are a lot of expenses like traveling and utilities that can stack up.”

The fact that he qualifies for ADA also means that Win is eligible for accommodations under Purdue’s disability resource center.

“(The DRC) helped me with my attendance, that’s really a big factor in my accommodations,” he said. “There are certain days where I just can’t go to class because it’s too much. I’m not able to walk like I used to anymore, I get really tired.”

In addition to attendance, DRC also makes sure that he lives on the first floor of his residence building and has access to testing accommodations.

“My teachers know sometimes I can’t make it to classes or if I’m going to be running late because I was at dialysis for a little longer than usual,” Win said.

His condition hasn’t stopped Win from continuing to make the most of his college experience, including his current job as a residence coordinator at University Residences Boiler Apartments.

“I was an RA last year at what is now Parker Hall on the fifth floor. Over the summer, I got a promotion to become a coordinator for URBA,” he said. “That was a hard decision to make because I didn’t want to leave my support network, but it’s been really fun.”

Win said one of the best ways of raising awareness about these conditions is to listen to patients.

“I know from personal experience that trying to explain to my parents was really difficult,” he said. “It wasn’t that they didn’t believe me, but it was ‘you don’t look sick.’”

He believes a large part of that fear and disbelief comes from a lack of knowledge about the disease, and the fact that much research hasn’t been done about the condition.

“The answer is we don’t know,” he said when asked if a kidney transplant would prevent his condition from being exacerbated.

“There hasn’t been enough research about IgA nephropathy. It could very well come back and cause the same disease,” Win said.

Win said the diagnosis changed his outlook on life, and the knowledge he could die in the next couple of years is a stark reminder of all that he could miss.

“With me being a college student, and you know, fairly young, right. I still want to live more…” he said. “It changed how I look at life now. Don’t take it for granted.”

Learn more about kidney donation or get tested at www.kidney.org.