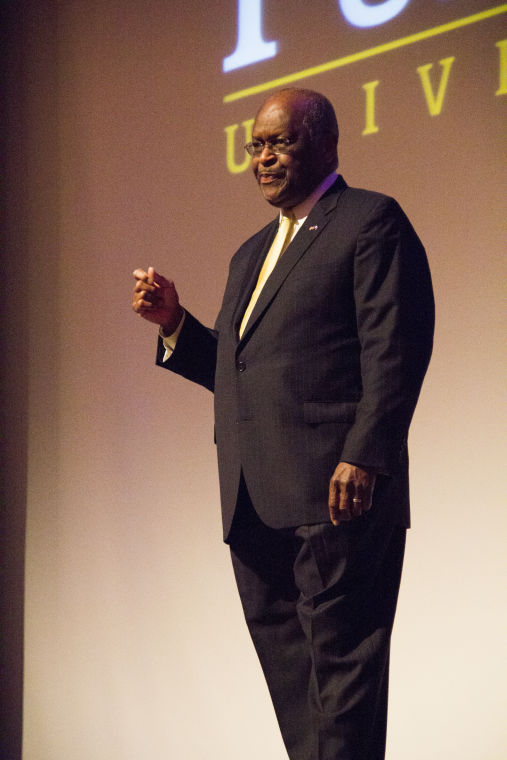 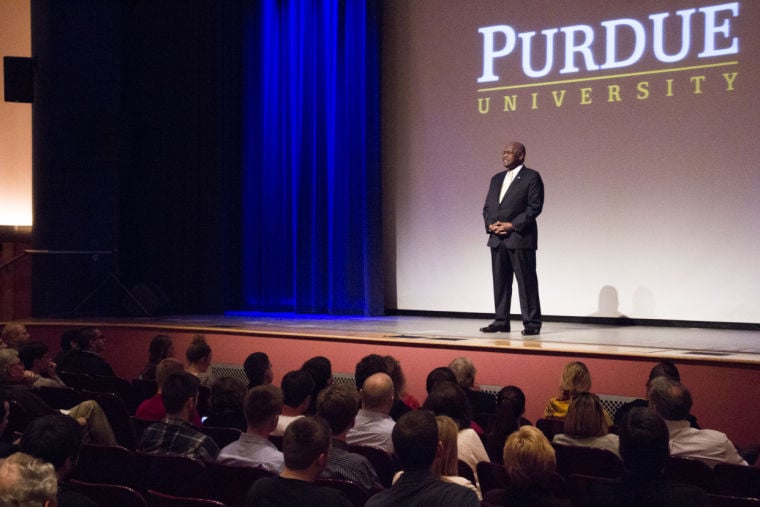 Politician and Purdue alumnus Herman Cain gives a speech in Eliza Fowler Hall in the Stewart Center on Thursday evening.

Politician and Purdue alumnus Herman Cain gives a speech in Eliza Fowler Hall in the Stewart Center on Thursday evening.

“We wanted to bring a different viewpoint than we see in class,” said Giovanni Malloy, president of Purdue University College Republicans, on arranging for former presidential hopeful Herman Cain to come to campus Thursday night.

A fellow Boilermaker, Herman Cain graduated from Purdue with a master’s degree in computer science in 1971 and worked as a computer systems analyst for a few years. Then he went into business and became CEO of Godfather’s Pizza. He was also a candidate for a senate seat and ran in the 2012 presidential campaign, from which he later withdrew. Politics and business were the main parts of Cain’s appearance Thursday night.

“I’m here to assure young people that the American dream is still alive,” said Cain. In the past two years, Cain has spoken at over 155 college campuses, and he urges young Americans to continue to have goals and to strive for their dreams.

“You might have to work a little harder and work a little longer,” said Cain, “but if you believe it can happen, it will happen.”

Touching on the massive debt college students face today, Cain said, “You don’t have any excuse, even if you’re broke.” He spoke on how both he and his father faced financial burden but still achieved monetary success.

As far as the state of the economy, Cain said “There is such a thing as a trickle-down effect.”

Cain said the main problem facing the economy today is that the Gross Domestic Product is growing at 2 percent, half of the optimal 4 percent when the economy is robust. To restore the economy he proposed a two-part plan. Part one was to replace the current tax code with a simplified version. Taxes were also a part of Cain’s presidential campaign with his 9-9-9 Plan. This would have replaced all taxes with a 9 percent tax on business, income and sales.

The second part was to have “principled trustworthy leadership,” he said. Cain defined proper leadership as someone working on the right problem, asking the right questions and removing barriers to success, or W.A.R.

Regarding Purdue, he said “You all have a great leader leading this university.”

In terms of politics and corruption, Cain said not “to let the media lenses define America.”

Cain stated that the media tends to twist topics out of control and doesn’t present the full side of the story. He particularly spoke on the Religious Freedom Restoration Act, and said that “it doesn’t discriminate.”

He said that from a business standpoint there was no flaw in the law and that it was within people’s rights. Pointing out similar laws in other states, he said that this was a chance for liberal LGBTQ activists to rally and receive media attention.

“This has all been the media on a feeding frenzy,” said Cain. “That’s what’s wrong with political correctness.”

Purdue alumnus Herman Cain died earlier this week, announced Thursday on his social media accounts and website, after being hospitalized with …

Indiana's Religious Freedom Bill might be more divisive than unifying