A revamped Union basement. A handful of new restaurants. Costly penalties for falling behind in customer-satisfaction surveys.

The contract between Purdue and Aramark Corp. reveals a trail of millions of dollars shuffling between the two.

Purdue signed the contract with Aramark last June for the management of the University’s retail dining services. When The Exponent received the contract in November after requesting the document on June 2, dozens of pages were fully redacted, concealing the amount of money Purdue is paying or receiving from Aramark in return for its services. 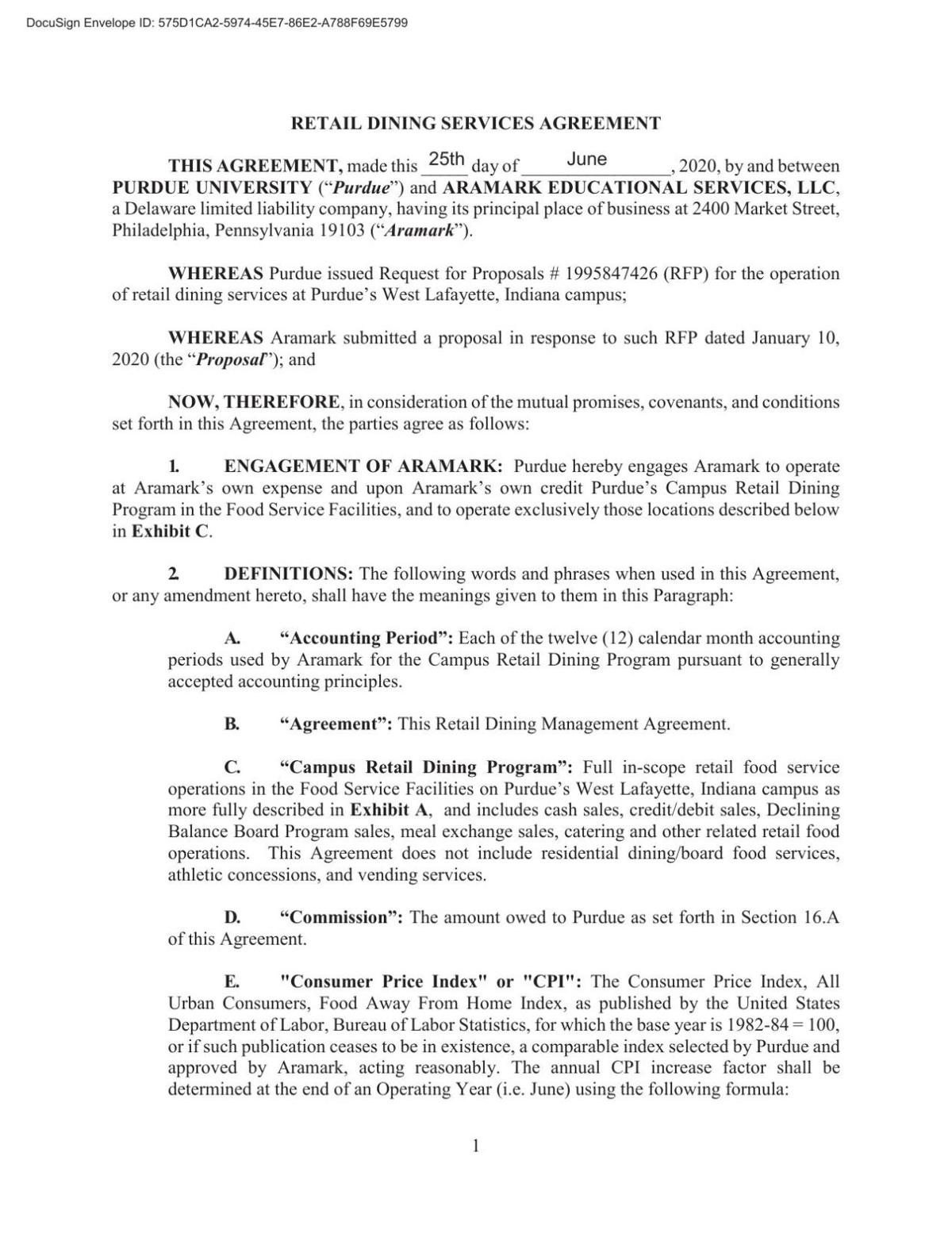 The public access counselor ruled in The Exponent’s favor on Feb. 22, saying Purdue should review its redactions of the contract.

On Friday Purdue sent The Exponent a less redacted version of the contract and Aramark’s initial proposal to Purdue.

Here’s what the documents say.

Millions of dollars are flowing between Purdue and Aramark’s coffers now and into the foreseeable future, possibly for two decades. The contract is valid for an initial 10-year period, and includes two five-year extensions, if Purdue is happy with the company’s services.

Aramark’s financial proposal states a projected return of more than $91 million to the University over the next 20 years.

Several million has already been granted to Purdue in various grants and monies for facility renovation. Aramark agreed to give Purdue an “unrestricted grant” of $10 million in several installments for considering the company. Eight million of that grant will be delivered over a 20-year period in equal payments.

How much money is Aramark paying Purdue?

Note: Some of these monies are scheduled to be paid starting the fifth year of the operating agreement, or increase annually based on inflation and previously agreed-upon rates.

The company also agreed to a financial commitment worth more than $15 million, which it will pay in renovating dining facilities in a similar payment scheme to the unrestricted grant. Aramark will pay Purdue other assorted grants for improving facilities over time, funding part of the hospitality and tourism management team and other periodic upgrades.

What’s Aramark’s history with the president?

Early in his tenure as Indiana’s governor, Purdue President Mitch Daniels oversaw a deal between the company and Indiana’s Department of Correction starting in 2005. Aramark serviced Hoosier prisons and jails in an agreement that is ongoing and that has paid Aramark over $112 million.

In Aramark’s technical proposal to Purdue, the company boasts of its frequent visits to campus over the past seven years. This lines up with Daniel’s arrival to campus in 2013, suggesting that the company came to West Lafayette in tandem with the man famous for his inclination to privatize institutional operations. 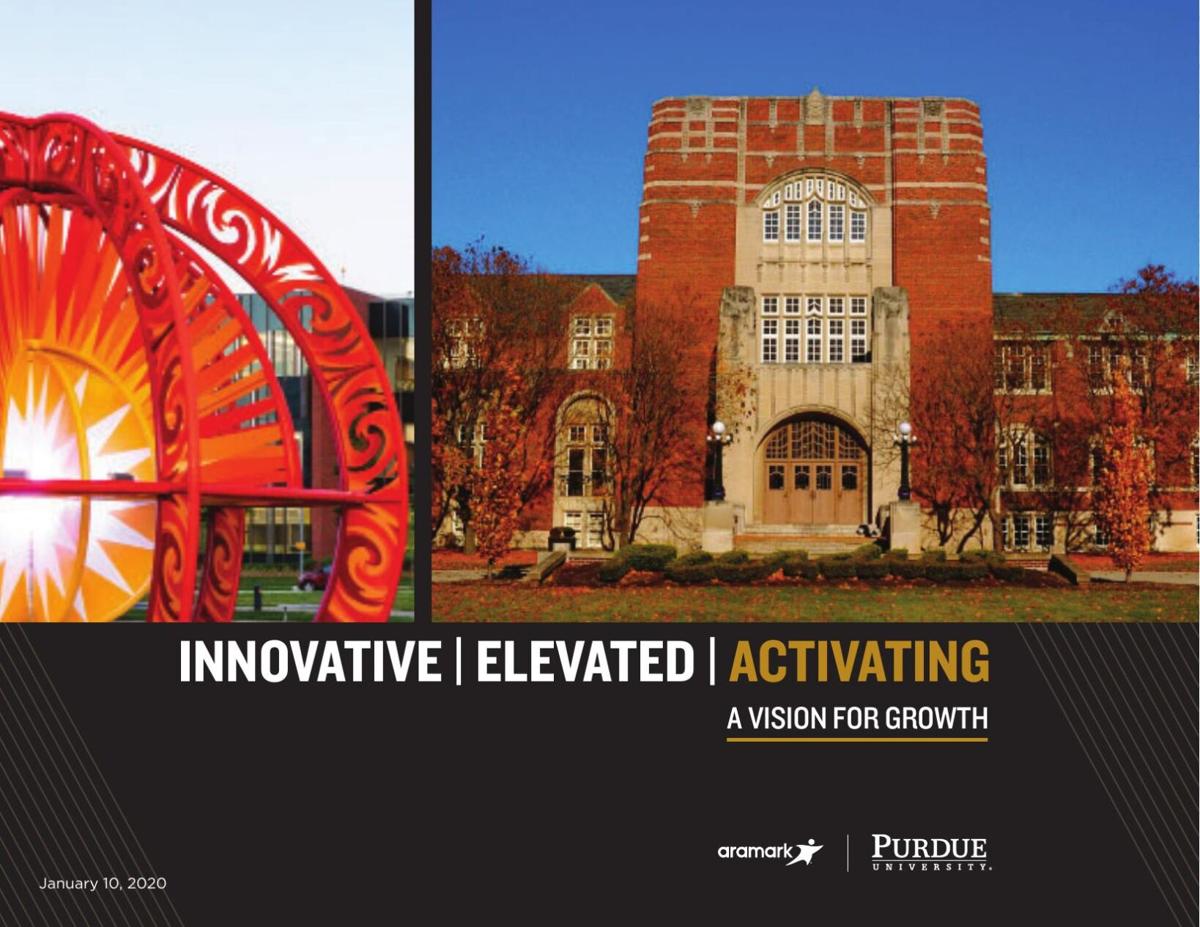 Similar to Aramark’s contract with Purdue, its initial agreement with the state’s corrections department defined a starting term of four years, with three two-year renewal options — far shorter than the two-decade agreement with Purdue.

The future of PMU

Both Aramark and Purdue are responsible for reconstruction of the Union at different points during the renovation process. The contract states that Aramark will spend more than $15 million to “design, construct and renovate” food service facilities, save for the PMU “back of house” space.

Before then, Purdue will have already renovated the PMU front- and back-of-house space in preparation for Aramark.

Though the company had already revamped the convenience markets around campus by fall, the rest of its construction will last much longer, as Aramark works to renovate the entire basement of the PMU. A technical proposal requested alongside the contract lists several eateries with which Aramark plans to draw up subcontracts to form what will be called the “Purdue Marketplace.”

Several conglomerates make up the marketplace.

A Boilermaker Market is also supposed to be located inside the PMU.

Pappy’s Sweet Shop is gone, its innards torn out as part of the Union’s remodeling. Walk-on’s Sports Bistreaux will operate there instead, according to the proposal. The restaurant is set to open in January 2022, per an earlier Aramark press release.

The Union basement where Urban Market use to be has been gutted in preparation for new restaurants.

Because Aramark’s contract covers only retail dining on campus, dining courts and vending machines aren’t expected to be affected by the new agreement. Beyond services in the PMU, Aramark will manage other Boilermaker Markets across campus, and it has already brokered deals with food trucks in the fall to provide meals to socially distanced students outside the Armory.

Aramark also wants to make greater use of the Starship robots that now swarm campus with automated food deliveries. Its technical proposal states that it hopes to elevate the use of Starship Technologies, likely through the delivery via robot of food from its future eateries to students.

How much is everything worth?

It’s unclear how much the entire Aramark contract is worth, either to Purdue or to the company.

The contract does, however, list the estimated values of the various subcontracts that Aramark plans to sign with the above restaurants, which are:

How else will Purdue’s retail dining change?

Aramark proposes both a concentration on centralizing Purdue’s eatery locations while also bringing more options to the south side of campus.

The company notes that campus offers several decentralized locations, like Port Cafe, Amelia’s and Cary Knight Spot Grille. Most, if not all, of these could be relocated to a centralized retail dining area, the proposal states.

Purdue has already closed Cary Knight Spot, which Aramark will now use as space to operate an outlet of Famous Frank’s food truck,

Further, the south side of campus, commonly delineated by State Street, seems underserved in Aramark’s view. A rigorous social media campaign and increased use of food trucks could change that, the company says.

Creating one or two centrally located late-night destinations where meal swipes could be used could also help students in need of late-evening and early-morning fuel, according to the proposal.

Will I still be able to use dining dollars?

Can I work in the PMU or other retail dining services?

Aramark agreed to offer every Purdue retail dining employee a position with at least the same compensation and employment status. That hiring is still dependent on a background check.

Those “transition” employees must then be granted at least a six-month supervised period of working with Aramark. As Aramark employees, they receive Aramark’s standard benefit package, according to the contract.

As part of its agreement, Aramark will match Purdue’s educational assistance benefit for transition employees who are enrolled as students at Purdue University Global.

Purdue spokesperson Tim Doty confirmed that just four now-Aramark employees are enrolled at Purdue or Purdue Global. They’ll be able to choose how they want to finish their education, he said, whether that be by staying with Purdue or its online partner, or by taking advantage of Aramark’s programs.

Aramark already has a program for its employees, providing tuition coverage for online degree programs at universities like Arizona State University, according to a 2019 press release.

Student employees will receive at least one paid “study day off,” per the contract.