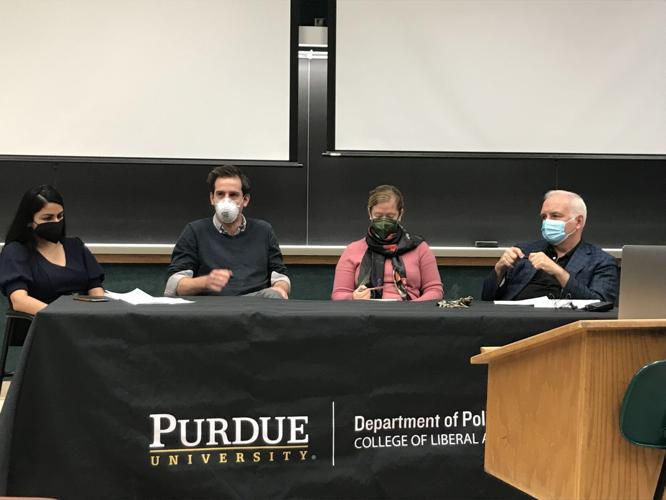 Four political science professors held an hour-long panel discussion to go over the ongoing crisis in Ukraine and address some fears shared among students. 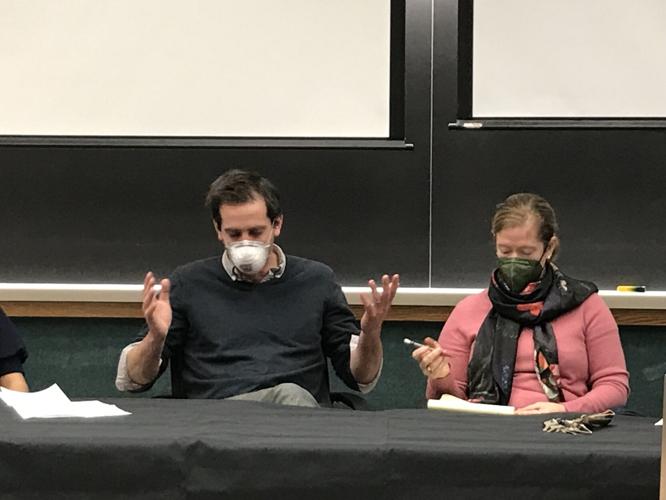 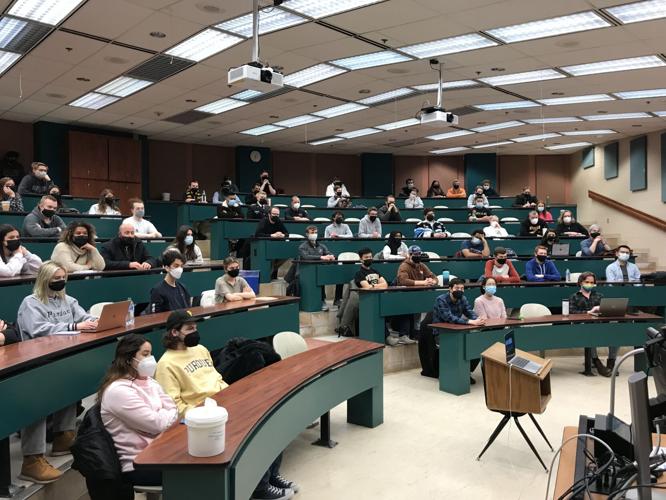 Dozens of students packed into Beering 2280 to hear updates and professors' opinions on the ongoing conflict in Ukraine.

Four political science professors held an hour-long panel discussion to go over the ongoing crisis in Ukraine and address some fears shared among students.

Dozens of students packed into Beering 2280 to hear updates and professors' opinions on the ongoing conflict in Ukraine.

Dozens sat in a large lecture hall, anxiously awaiting discussion over the recent events in Ukraine. A chilling silence filled the packed lecture hall as they waited.

The political science department held a panel discussion Friday in Beering Hall between four professors following the invasion of Ukraine on Wednesday night.

The panel discussion was held by political science professors Keith Shimko, Kyle Haynes, Swati Srivastava and Melissa Will. The first to break the air was Shimko, as he responded to a question about Russian President Vladimir Putin’s intentions and end goal in the invasion of Ukraine.

“It's clear what's motivating him, but less clear what the outcome will be,” Shimko said.

Shimko said the territorial breakup of the Soviet Union was tragic for Russia to sit and watch, and Putin isn’t going to tolerate a country at its borders that is anti-Russia and more pro-western.

He said he believes Putin’s end goal is to install a government in place of Ukraine’s current one that will halt the pro-western movement and be a lot less powerful.

The professors went on to assess the response of the U.S. and NATO, which introduced a debate over the vital interests of the conflict, mainly between Haynes and Shimko. Although at times there were some disagreements among the professors, they maintained light-hearted responses, which helped ease the tension of the room and even brought in some laughter.

“We are seeing an international movement, which is important,” Srivastava said when discussing the United Nations’ role in the situation. Srivastava said possible answers would be Russia getting suspended or kicked out of the UN.

Will, a former CIA analyst, said there seemed to be a little bit more unity than expected; countries, including the U.S. and the U.K., had been helping to prepare Ukraine. Will said she believes that although the invasion couldn’t be prevented, perhaps Ukraine and other countries were more prepared for the fallout of events.

The question of cyber security and effectiveness of the sanctions against Putin was mentioned.

“The sort of evidence of cyber security attacks against the U.S. might not be as large,” assistant professor Kyle Haynes said. “There’s not always the same public pressure to retaliate.”

In regards to the effectiveness of sanctions against Putin, Haynes said, the hope is this time of action is met with economic costs and pain to Russia as assets are being seized and banks are being cut off.

Towards the end of the discussion, the professors looked to the crowd for questions, watching as dozens of hands went up. Questions ranged from the concern of air space to what this means for China and implications around the world. The professors did their best to ease the concerns of individuals, ending it with reassurance to what this means for those around the world.

When asked about the possibility of Putin's future plan to invade neighboring NATO countries, Will said, “It’d be a series of low-probability events to get us to that worst case scenario.”