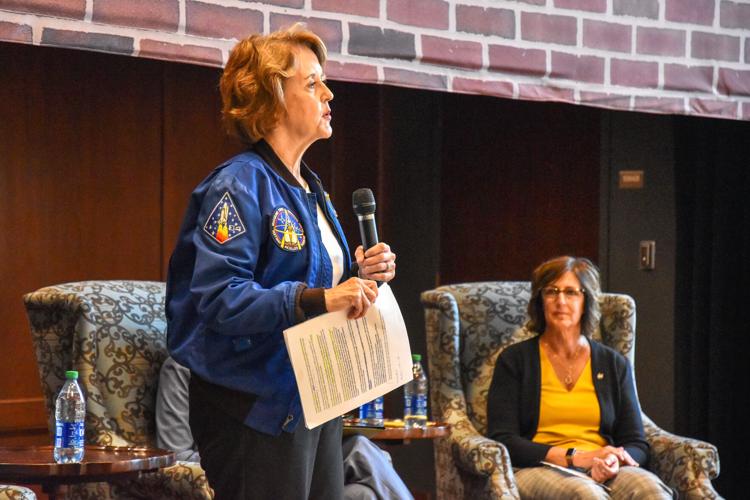 Kathy Thornton tells students about her path from arriving at Auburn University in the 1970s to leaving NASA after several successful missions in the late 1990s. Thornton stressed the importance of being open to opportunity. 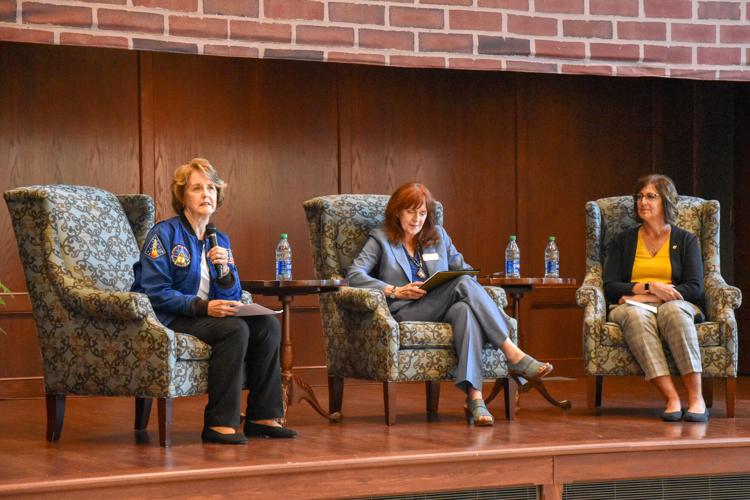 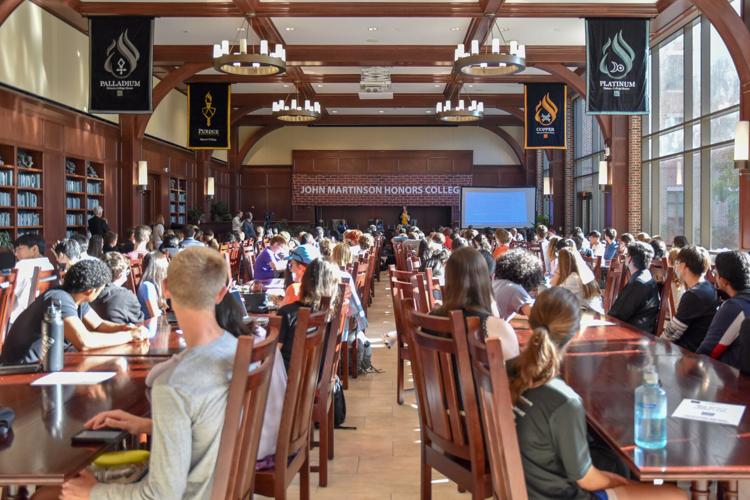 Students and faculty pack the Honors College hall for the inaugural event in the Leading Women Toward Space Careers program.

Kathy Thornton tells students about her path from arriving at Auburn University in the 1970s to leaving NASA after several successful missions in the late 1990s. Thornton stressed the importance of being open to opportunity.

Students and faculty pack the Honors College hall for the inaugural event in the Leading Women Toward Space Careers program.

She told a packed Honors College North room of students they don’t need to know yet what their paths will look like, but they should explore the opportunities life presents.

“For those of you like me who haven’t figured out where (your) destination is, just be sure that you don’t make too many backward steps,” said Thornton, also an Astronaut Hall of Famer and University of Virginia engineering professor emeritus. “Keep your direction forward and lateral and you can open up this entire hemisphere of opportunities to explore even if you never find your final goal. Maybe that’s the object in life: to never find your final goal.”

Thornton came to Purdue with International Space Station Director Robyn Gatens on Thursday as part of the Honors College’s Leading Women toward Space program, which aims to support college women across STEM disciplines for leadership in space-related careers, Rhonda Phillips, dean of the Honors College, said at the event.

“The vision is to provide students the knowledge they need beyond technical skills to advance in their fields,” she said.

Their paths to NASA

A high school science teacher pointed Thornton to the STEM track, and a smelly classmate pointed her away from engineering, she said.

“I was going to be an engineering major, and I found out that the curriculum was way more restricted than I wanted,” Thornton said. “And the kid who sat next to me smelled so bad. It was some mixture of pot and poor hygiene. I decided right then and there engineering is not for me, so I went into physics.”

Physics ended up being more in line with her interests, anyway, she said. “In physics you get to crash carts together on a track, you get to drop stuff out of windows. Who could not like that?”

After getting her doctorate and completing a postdoctoral program in Germany, she noticed an opportunity.

“I saw an announcement that NASA was selecting the next group of astronauts and I thought, ‘What the heck?’ I applied and surprisingly, they called me.”

Since being selected as an astronaut in 1984, she said she has been on four space flights and logged over 975 hours in space.

She’s racked up awards for it, too. She received the National Astronautics Association Robert J. Collier trophy, the Freedom Foundation spirit award and the National Intelligence Medal of Achievement.

Gatens is a NASA multi-hyphenate: She’s the director of the International Space Station, researcher contributing to the ongoing Artemis mission and the agency senior expert for environmental control and life support, crew health and performance systems.

Encouragement from her dad led Gatens into engineering, and her journey to NASA started when she studied chemical engineering at Georgia Tech.

“I was strange because I liked chemistry,” she said. “I found that people either hate chemistry or they major in it. There’s not a lot of in-between.”

She’s been at NASA Headquarters in Washington D.C. for 10 years, but she started at the Marshall Space Flight Center in Huntsville, Alabama, in 1985 managing the Orion spacecraft crew support and thermal systems.

Gatens said at headquarters, she works with strategy, policy, administration and Congress. She recently gave testimony at a congressional hearing to persuade stakeholders to extend the space station life to 2030.

This is the “decade of results'' for the International Space Station, she said. One of the goals is to launch a larger moon rocket.

The future of NASA

There are routes to NASA for students with interests outside of engineering, Gatens said. There are so many fields required for NASA missions, and there’s  much to learn once you get there.

She had to call in an interdisciplinary team once during an attempt to perfect a urine processor, for instance.

Urine processors distill urine and boil water out of it. It turns into a concentration solution called brine, Gatens said. The first time they tested it was on the ground.

“What we didn’t account for is astronauts lose calcium more on orbit than they did on the ground,” she said. “The solids precipitated out sooner on orbit.”

They had to rely on chemists and microbiologists to redesign with different materials, Gatens said.

“We’ve got all kinds of disciplines at NASA headquarters,” she said. “Yes, we’ve got engineers, but we have policy people and lawyers. There’s a lot of careers to be had in space, not just engineering.”

Even though she said she’d love to work on spreadsheets, that’s not her job, Gatens said. But she’s picked up a lot of different skills while at NASA.

“Do things that you don’t think you’re necessarily qualified to do,” she said.

Thornton said she’s still not exactly sure why she was chosen to be an astronaut over the other more than 1,000 qualified candidates.

“I contend that they called the wrong number, that NASA made a mistake, and they continued with that," she said. "But to be honest, I have no idea.”

If there’s anything Thornton wants from the next generation of NASA, she wants to see someone set foot on Mars.

“I’m counting on you guys to do it,” she said. “I’m past my prime. But you guys have to do it, and you need to do it while I’m still here because I want to see it.”

Molly Gard, a freshman in exploratory studies, said it was inspirational to listen to someone who had actually been in space. It’s interesting that there are other ways to work for NASA beyond engineering and physics, she said.

First-year engineering student Yashashwini Singh said he liked that the women were honest.

“What I really enjoyed was that there was humor," he said. "They weren’t sugar coating, and it’s good to acknowledge hard moments.”

Christina Sowinski, a first-year engineering student, said she appreciated hearing about the experiences of people who work at NASA. It’s even better to hear that the organization is diversifying.

“I really look forward to the future of women in space," she said, "and I hope to make my mark in that field.”