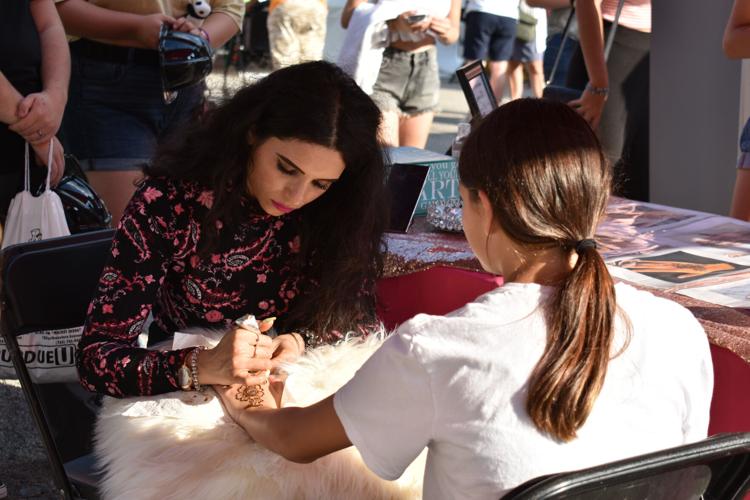 Shilpa Merwade, the owner of Shilpa's Beauty Studio in downtown Lafayette, does henna at Global Fest. 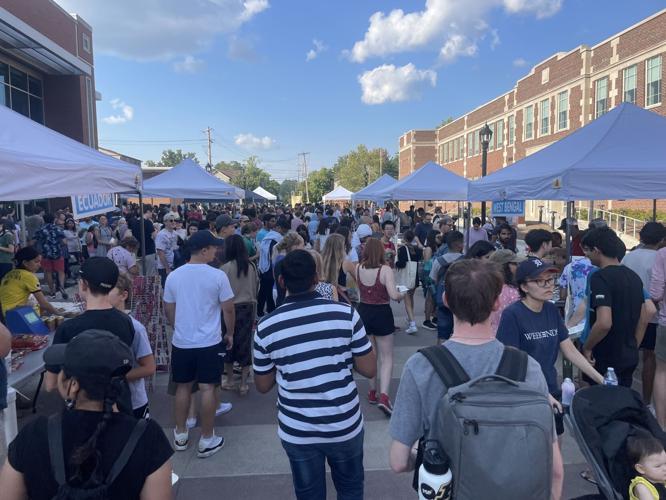 Hundreds of people flocked to Chauncey Avenue to visit the various food booths at Global Fest on Saturday evening. 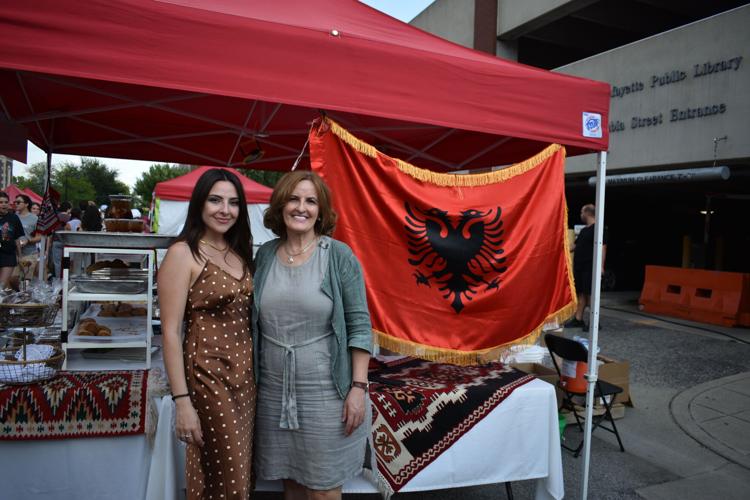 Jovana and Natasha Vasili, the owners of Lafayette bakery Scones and Doilies, stand in front of their Albania booth.

Shilpa Merwade, the owner of Shilpa's Beauty Studio in downtown Lafayette, does henna at Global Fest.

Hundreds of people flocked to Chauncey Avenue to visit the various food booths at Global Fest on Saturday evening.

Jovana and Natasha Vasili, the owners of Lafayette bakery Scones and Doilies, stand in front of their Albania booth.

Members of the Asian American and Asian Resource and Cultural Center performed the lion dance, which represents happiness and joy in Chinese mythology.

Emily Reyes, one of the performers, said it’s nice to see people with her same background helping to keep the traditions of the culture alive.

“Being part of the AAARCC community gives me a humble voice,” Reyes, a sophomore in the Polytechnic Institute, said. “Global Fest is a way for the underrepresented minorities to showcase their cultures and the beautiful intricacies of their heritage.”

30 booths lined Northwestern Avenue and Columbia Street for Global Fest. Each booth represented a different region of the world, many proudly displaying their country’s flag. Smells were wafting in the air from food booths, ranging from Albanian corn casserole to Mexican tacos and enchiladas. Booths sold merchandise which included clothes, jewelry, assorted trinkets and food.

Global Fest brings cultural awareness and curiosity to the streets of West Lafayette, Bhavti Shah, a sophomore in the Krannert School of Management, said.

Students who are part of certain cultures feel more integrated at Purdue when they see themselves represented at events like these, Shah said.

“I’m not used to things like this, since I’m from a small town,” Rae Pingel, a sophomore in the College of Health and Human Sciences, said. “I’ve always had an interest in other cultures, so seeing everything like this is nice.”

The Chinese Calligraphy Club allowed visitors to practice their calligraphy or try it for the first time at the club’s booth. People could practice calligraphy on a scroll or draw a Chinese tattoo on themselves using temporary ink.

“What attracted me to calligraphy was the appeal of the art,” Chinese Calligraphy Club President Kaniese Mack said. “I think it’s very relaxing. Being part of the culture is so interesting.”

“Don’t be afraid to explore a culture that’s not your own,” the sophomore in the College of Engineering said, “that’s why we’re open to all levels of calligraphy.”

Along with booths for Purdue organizations and cultural centers, there were booths selling different types of worldly merchandise.

Abdoulatif Aboubacar, owner of Tuareg Crafts, said he’s been coming to Global Fest for 10 years, usually with his father. His crafts consisted of handmade sterling silver rings and statement necklaces, along with small colorful pouches and bags. He said he comes back to this festival because he feels that every different corner of the world is represented.

“It’s like a melting pot,” Aboubacar, who worked at the Sahara booth, said.

Aboubacar said the customers and people he meets while working his booth makes his job most enjoyable.

“People always give us good comments,” he said. “People want to know the backstory behind every piece of handmade jewelry.”

Aboubacar said his father made his living selling jewelry and other handmade goods, and his father taught him everything he knows.

“This is my life,” he said. “My family has been doing this for about 200 years. It’s from one generation to another.”

They own the family-run Lafayette bakery Scones and Doilies.

Natasha Vasili said she feels she is proudly representing her country by serving traditional dishes.

“We’re first-generation immigrants, so we’re really proud that we’re able to have our own business after working really, really hard,” Jovana Vasili said.

Global Fest brings to light the diverse nature of Lafayette.

“You realize (at Global Fest) that people come from all over the world, and so it makes this town really beautiful when you realize how diverse it is.”