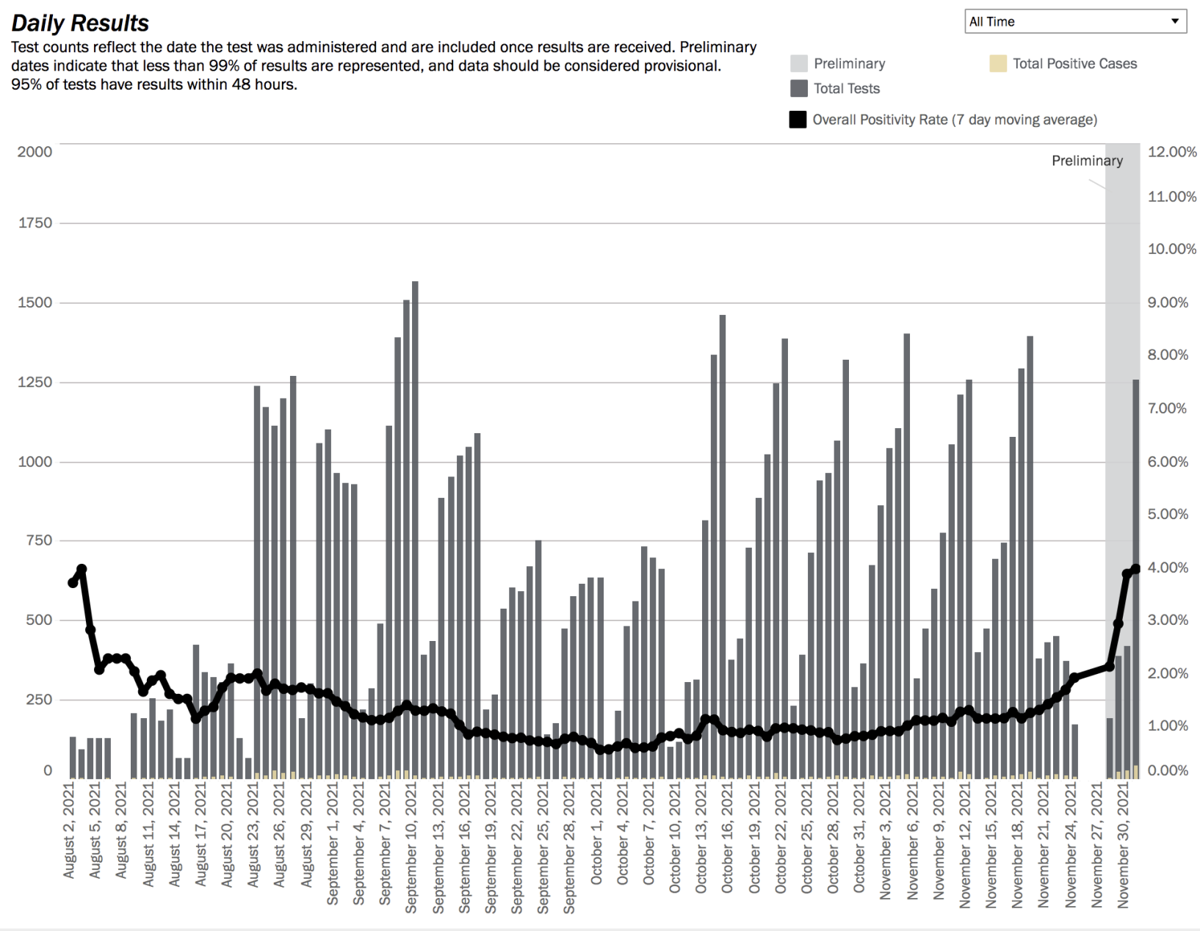 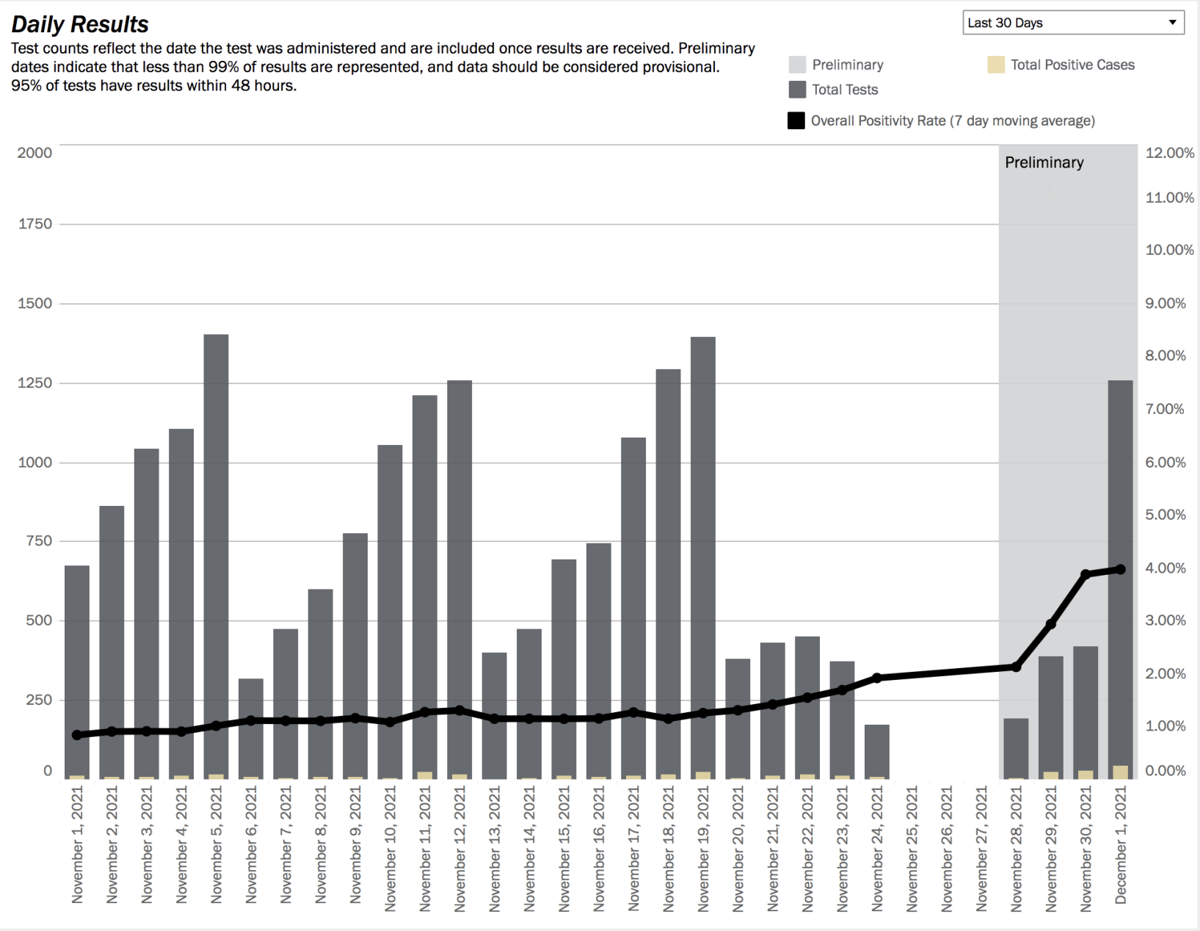 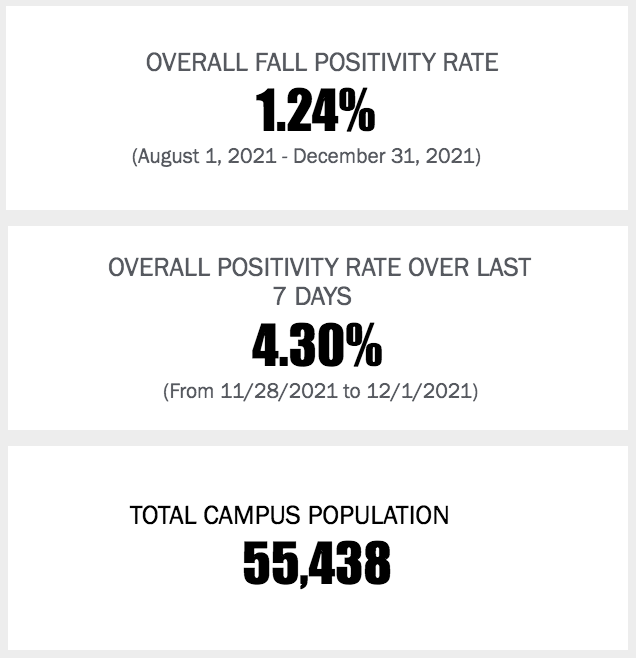 Purdue’s COVID-19 case count and positivity rate are at the highest they’ve been all semester. And Tippecanoe County isn't doing much better.

Less than a week after Thanksgiving, the Purdue COVID-19 testing dashboard shows daily positive tests reached a semester high on Tuesday with 28 cases, and nearly doubled Wednesday to 45 cases. There are 11 occupied isolation and quarantine beds.

The testing data from this week is preliminary and not yet final, according to the dashboard. It’s unclear if testing data from Thanksgiving Break was included in this week’s data since no data is recorded from Nov. 25 to Nov. 27.

“While we have seen a slight uptick in positive cases as campus community members return from their holiday break spent among family and friends outside the campus bubble,” Purdue spokesperson Tim Doty said in an email, “the increase may appear larger than it actually is due to the decrease in overall tests performed.”

A similar number of tests were administered Nov. 20 and Monday, 378 and 389 respectively. The case counts for those days are 4 and 22. There’s the same trend when comparing the numbers from Nov. 18 and Wednesday. Each totaled 1,292 and 1,256 tests, respectively, but there were 16 positives on Nov. 18 and 45 Wednesday.

Purdue will stay updated on the Omicron variant, Doty said.

“As always, The Protect Purdue Health Monitoring and Surveillance Team is constantly looking at data and the latest science to determine the best course of action for the campus,” he said. “If our policies change we will let everyone know via email, Purdue Today, the Protect Purdue website and through local media.”

Local hospitals are bracing for a potential holiday surge as well as the possibility of the Omicron variant making its way to Indiana.

Local hospitals held a video conference on Friday reiterating the already existing issues with hospital capacity as well as the future issue of a potential new wave of COVID patients.

The TIppecanoe health department announced Thursday that Tippecanoe had gained 172 cases, the most cases since the surge in January setting the stage for Franciscan Health and IU Health Arnett to hold a joint conference on Friday warning of the rising case load.

“We are stretched to the max today,” said Dr. Daniel Wickert, vice president of medical affairs.

“COVID cases (in Tippecanoe County) doubled during Thanksgiving week,” Dr. Christopher Mansfield of IU Health Arnett said. “If you put at what the next six to eight weeks looks like, it’s really just a straight line going up.”

The officials reiterated the importance of wearing a mask and taking the vaccine. The doctors also praised Purdue’s partnership with them in dealing with COVID-19, but had an issue with Purdue’s upcoming basketball season in the Mackey Arena. They stressed the need for better messaging on wearing masks inside the arena.

“If you have an enclosed arena 14,000 strong, there is an increased risk. Period,” Wickert said.