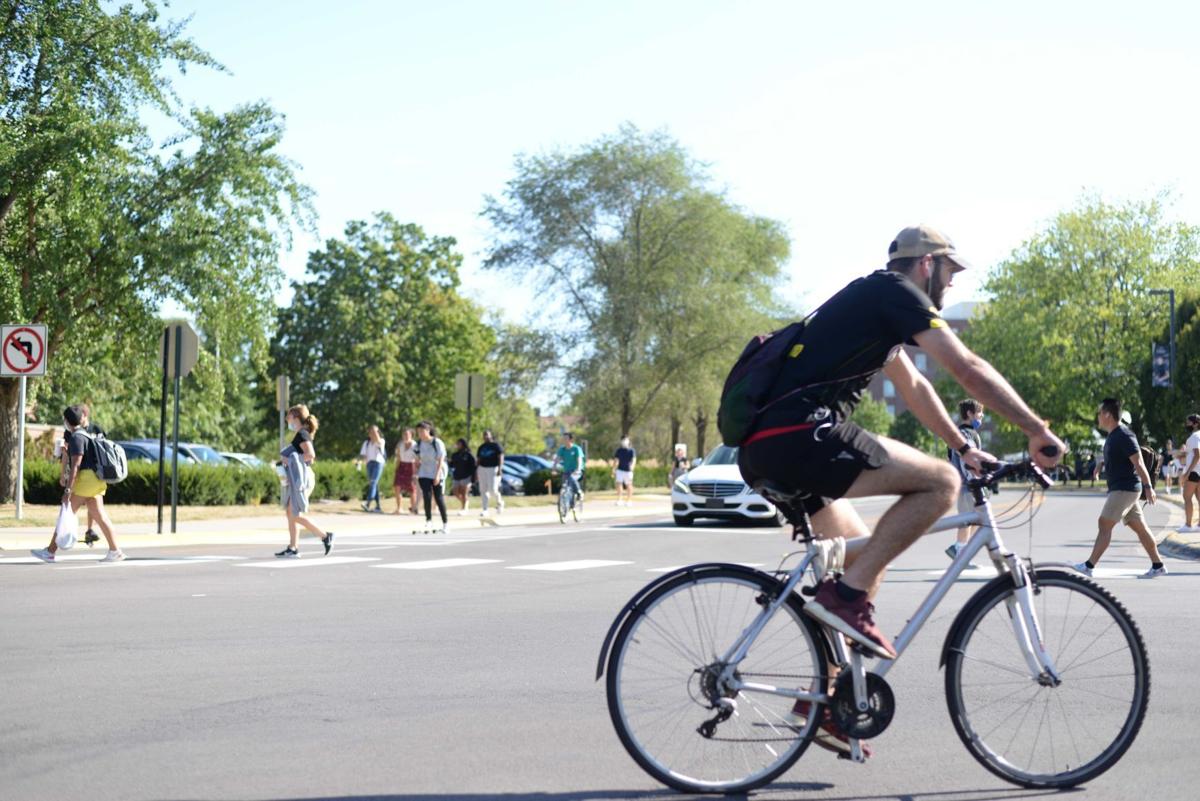 A cyclist tuns onto 3rd Street toward University Residences.

The intersection of Grant and North streets commonly has pedestrians, cyclists and cars navigating traffic.

A cyclist tuns onto 3rd Street toward University Residences.

The intersection of Grant and North streets commonly has pedestrians, cyclists and cars navigating traffic.

On a campus with the largest freshman class in history, heavy bicycle and skateboard traffic has caused safety issues for drivers and pedestrians alike.

Cody, a local delivery driver who asked not to use his last name to protect his job, said he noticed an uptick in bicyclists violating traffic laws both on and off campus this year.

“It’s always been an issue, but it seems to be more and more common,” Cody said.

Cody recalled a recent instance where he was driving on North Salisbury Street and a bicyclist blew a stop sign. Cody said he had the right of way, but braked his delivery truck to make sure he didn’t hit the cyclist.

But this wasn’t a first for him, he said, as he said that he’s had countless close encounters with bicyclists blowing stop signs and not following bike laws.

After a “de-densified” campus experience last year, students now walk shoulder-to-shoulder on sidewalks and bike lanes alike on their way to and from class. When pedestrians overflow into bike lanes, bicyclists are are forced onto sidewalks or into the street, creating more issues.

West Lafayette bike laws mirror state law, West Lafayette police Capt. Adam Ferguson said. The bicyclists must ride with the flow of traffic and in single file, he said. If there isn’t a bike lane, it’s highly recommended to stay as much to the right of the street as possible.

Purdue police shares tips on how to navigate campus streets

But the laws are relaxed on campus, and bicyclists are allowed on the sidewalks, which has been the topic of argument since classes began. On the Purdue Reddit, students have voiced their concerns over both students walking in dedicated bike lanes and bicyclists disregarding pedestrians as they bike through campus.

“To the two girls walking their dog down the bike lane on the mall in front of WALC, I hope your dog relieves itself on the carpet,” one Reddit user poster said.

For now, Cody hopes students and citizens alike can learn more about how to stay safe while biking.

“I just want to let people know what the laws are,” Cody said. “Even if they’re not on a cay, if they’re on a roadway, they have to follow the laws.”