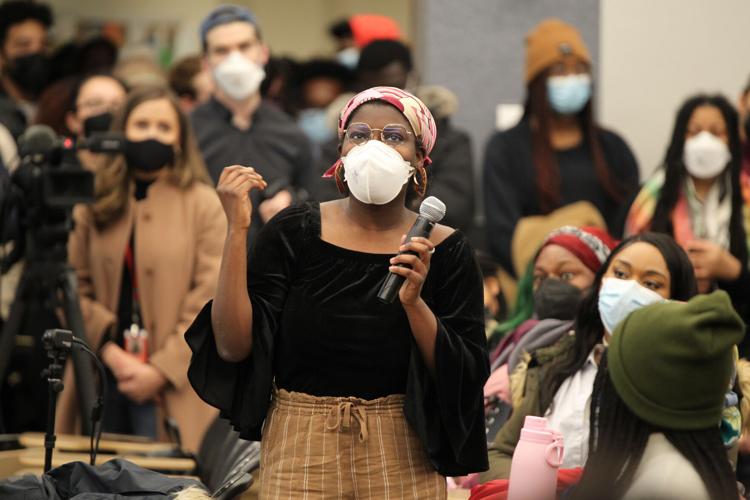 "There are tactics the university uses to silence students and burn them out," Essenam Lamewona said Thursday night. She said demands are taken to Purdue Police almost every year, and nothing has ever changed. Lamewona is a senior in the College of Science. 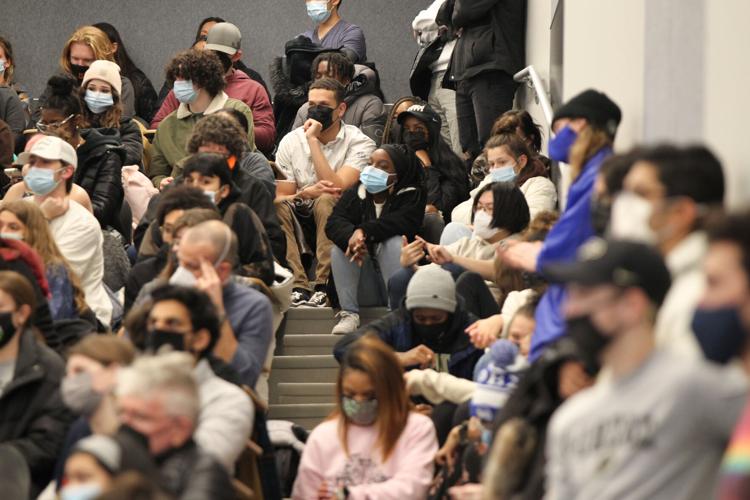 Hundreds of students piled into a lecture hall in Lilly to attend the Black Student Union's Town Hall. There were so many in attendance that dozens of students were forced to sit or stand along stairs in the room. 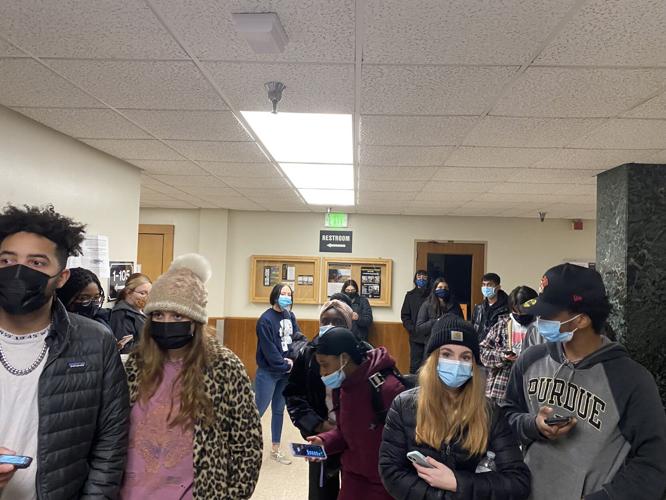 A few dozen students gathered outside of Lilly Hall Room 1-105 after organizers say the room is too full to allow any more people inside.

More than 600 people crammed into the seats, aisles and any other space they could find in Room 1-105 in Lilly Hall of Life Sciences. Nearly 25 students sat silently in a classroom in the basement, focused intently on The Exponent’s Instagram live as it was broadcasted on a projector screen. Dozens more stood just outside the the lecture hall, slowly inching through the doorway as they tried to better see and hear.

What they heard was an overwhelming consensus in students' demand for justice and change within Purdue’s administration and police department.

“(President) Mitch (Daniels) owes every Black student in this room an apology,” said Dynasti Smith, a junior in the College of Pharmacy, with tears in her eyes.

The student spoke to the crowd at the Black Student Union Town Hall, which was organized after a video of a Purdue police officer pushing his forearm against a Black student’s neck and face surfaced online Wednesday evening. The video was shared more than 1,000 times across multiple social media platforms and gained the attention of all local media and many news outlets in Indianapolis.

Purdue President Daniels released a statement posted to the Life At Purdue Instagram about the incident less than two hours before the event started. In the statement he promised “swift and thorough” investigations by PUPD and the Indiana State Police, after which video footage will be released.

Neither Daniels nor any Purdue police representatives attended the event. Purdue spokesperson Tim Doty said in an email that Daniels is "away, attending an annual University event."

The meeting was divided into several sections guiding discussion, from addressing the issue at hand to potential solutions. All students were invited to speak, but were asked to limit comments to a minute each.

Volunteers passed around mics and notecards, sanitizing the mic in between speakers, while a group of moderators from various Black student organizations led students through the various topics.

“My list of demands is very simple,” doctoral student Ariel Smith said into the microphone in between claps and cheers. "I want Purdue to keep the same energy with Protect Purdue (as they do) with protecting Black students.”

Smith argued that if the University can pay so much money for Protect Purdue efforts, there’s no reason it can’t invest in providing more safety and better resources for its Black students.

Not all in attendance were convinced the incident between the PUPD officer and a Black student included "excessive force."

A sophomore who said his name is Timothy said he wasn’t convinced there’s enough evidence from the video and the student’s statements alone to say the officer did anything wrong.

He was met with boos from much of the audience before he could finish his sentence. BSU adviser Brittne Paramore got back on her own microphone to quell the crowd down, demanding that all opinions be heard and all people be treated with respect.

For the most part, students said both police and the university need to be held more accountable and do more to protect Black students. Those demands include increased transparency and more in-depth training of officers.

Organizers said their next step is to compile all of the ideas presented in the town hall and send them to Purdue’s administration. The general consensus of those in the room was that if change doesn’t come after that, the next step is to protest. Some even suggested boycotting classes and sporting events to “send Purdue a message.”

Several students pointed out the lack of definition of the phrase “use of excessive force.” One moderator pointed students towards Indiana House of Representatives Bill 1006, which requires “the Indiana law enforcement training board to establish mandatory training in de-escalation as part of the use-of-force curriculum, and requires de-escalation training to be provided as a part of: pre-basic training, mandatory in-service training and the executive training program,” according to its website.

Local state Rep. Sheila Klinker said one of her assistants showed her the video and the BSU flyer about the town hall today, so she came to the event. She said members of the Indiana Statehouse found out about the video today.

“There may be some ramifications,” she said with a wink. “We have a very active Black Caucus."

As students piled into the room around 7 p.m. at the beginning of the event, Dean of Students Katie Sermersheim and Associate Vice Provost for Diversity and Inclusion Renee Thomas took seats near the front. Sadie Harper Scott, president of the Greater Lafayette branch of the NAACP, sat in the front row.

Those who were unable to attend in person watched virtually. The town hall’s Zoom link hit its 100-person capacity 15 minutes before the event began. Over 500 people joined the BSU’s Instagram live and over 600 joined The Exponent’s.

Organizers began turning people away at 7:05 p.m. Purdue Student Government executive director of governmental relations Isabelle Chan handed out notecards with the Zoom and Instagram live information to those not let into the room. Other organizers hooked up The Exponent’s Instagram live to a basement classroom projector screen about 40 minutes into the event so the few dozen students watching on their phones from the lobby could watch together.

Some of the Exponent’s live viewers discussed starting a new Instagram page to organize protests. At around 8:39 p.m., @protest_purdue was created.

“Purdue students demand that Jon Selke be held accountable for the lack of professionalism he brought to the situation,” the account said in a post at 9:26 p.m. “This situation did not need to escalate into violence! PUPD needs to update their training and protocols to ensure situations like this do not happen again.”

Some social media users in the Instagram live comment section left inflammatory comments — at least two consistently commented racial slurs, and other users said they reported and blocked those accounts.

The event was organized by the BSU, the African Students’ Association at Purdue and the Society of Black Engineers. Wiley Radio provided the microphones.

Daniels responds to calls for action and body cam footage

UPDATE: Purdue spokesperson Tim Doty said the lockdown "has has been the case since spring/s…