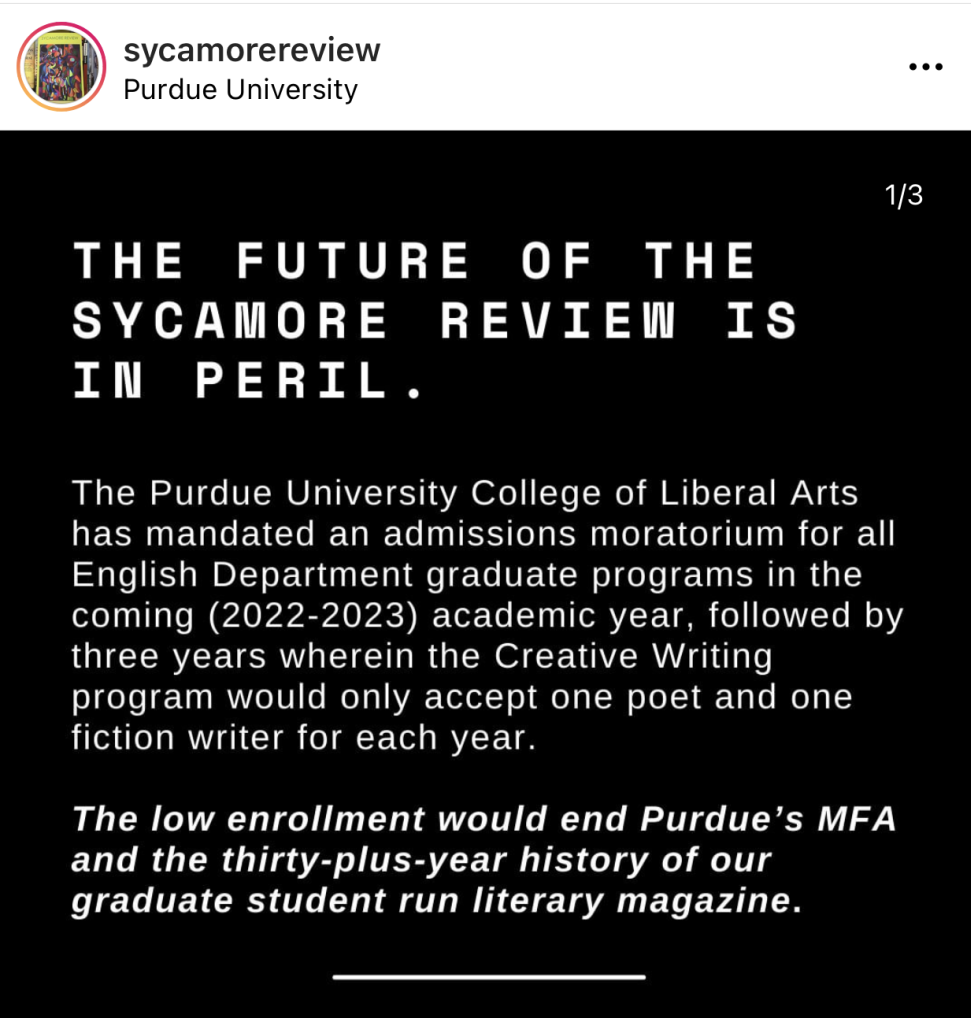 The Sycamore Review, a literary magazine run by graduate students, posted Monday that Purdue has issued a moratorium on graduate student admission into the English department. 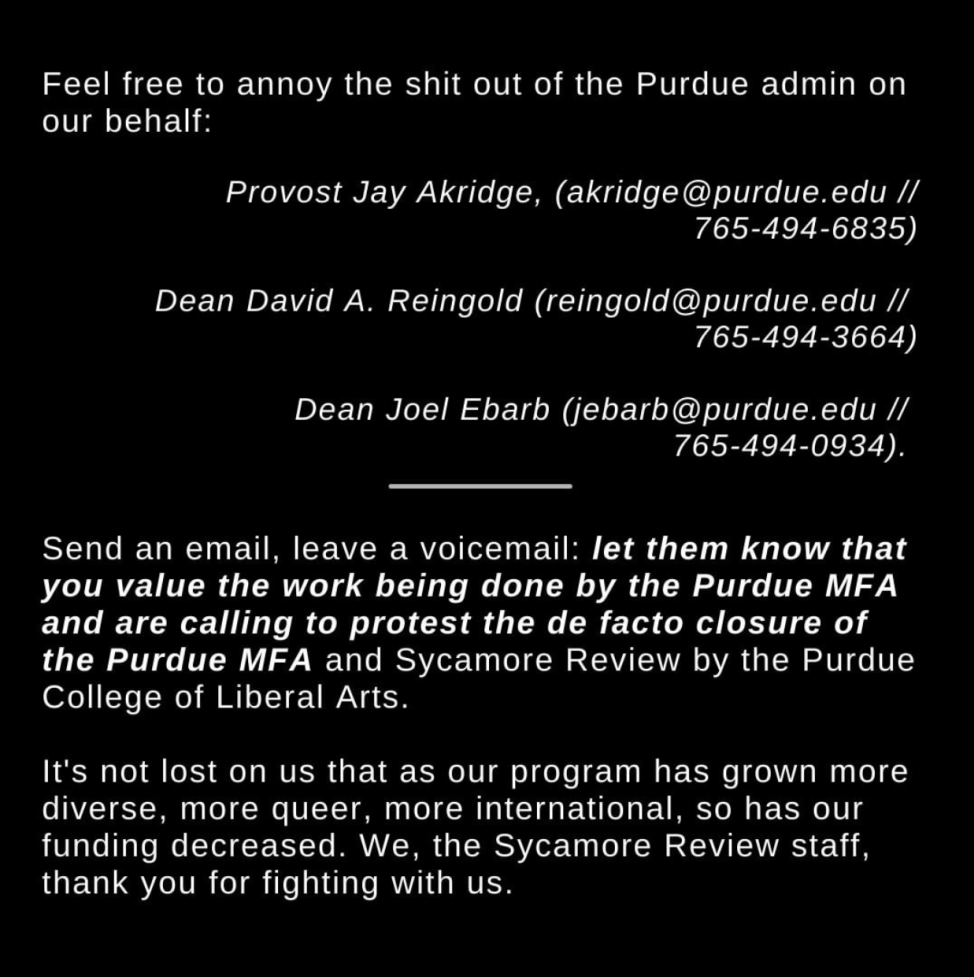 The Sycamore Review asks followers to plea with Purdue administration about the graduate student moratorium.

The Sycamore Review, a literary magazine run by graduate students, posted Monday that Purdue has issued a moratorium on graduate student admission into the English department.

The Sycamore Review asks followers to plea with Purdue administration about the graduate student moratorium.

There will be a one-year moratorium on graduate student admissions in the English department due to a lack of money.

The move will likely cause the department’s graduate programs to shut down in a few years and will negatively affect the amount of undergraduate classes offered, English department head Dorsey Armstrong said in an email.

“Every year the dean’s office tells us how much money we will have in our graduate student budget,” she said, “and this year, that number is just enough to continue to support the graduate students we currently have enrolled, but there is no money left over to admit new students.”

There are three graduate programs within the department: Rhetoric and Composition, Creative Writing and Literature and Theory and Cultural Studies. Armstrong said after the next year, it’s estimated only 10 students will be admitted for the whole department, despite each program needing at least eight to 10 students to continue.

“We have maybe two more issues,” said Amina Khan, the managing editor and a third-year graduate student in the creative writing department. “We could maybe last until the end of 2022.”

“When I graduate next year, there will literally not be a first-year class to fill my spot,” Chernin said.

At full capacity, the staff is at about 20 people, she said. The current staff is at 15, seven of whom are third-years about to graduate, Khan said, as the Masters of Fine Arts is a three-year program.

Khan said the journal receives between 1,500 and 2,000 submissions every year, and if the staff is unable to do the work to publish the journal, it will cease.

Both Khan and Chernin noted that the journal provides a space for writers to be paid for their work, and it has routinely supported more diverse artists through things like free submissions for Black, trans and Indigenous writers and fundraisers for Black trans organizations.

“It seems hard not to notice that as our program and as this magazine has become more diverse and more queer (and) more international, our funding has also decreased,” Khan said.

The College of Liberal Arts dean’s office has also continuously denied requests to hire new faculty to replace those who have retired or left the department over the past decade, Armstrong said.

She said the department also has money in other accounts it could use for graduate studies, but such funding requires authorization by the dean’s office, which has denied requests to transfer money for the past few years.

The department asks for and receives emergency authorization to hire temporary lecturers and instructors to meet student demand for classes each year, Armstrong said.

Emergency authorization for one-year hires only allows the department to get closer to meeting demand for classes, such as ENGL 106 and professional writing courses, which regularly have a waiting list of around 300 students a semester.

“CLA’s decision to not authorize any new faculty hires in combination with several years of budget cuts to our graduate program mean that we are just barely able to meet demand for courses for our majors,” Armstrong said, “and for other Purdue students who need our courses to fulfill Core requirements and earn their Cornerstone certificate.”

CLA Dean Dave Reingold declined to speak over the phone, instead insisting questions be sent via email. He hasn’t yet responded to the email, which was sent at 2 p.m. Monday.

Many within the English department have voiced their frustration. Chernin said she was “horrified” to hear the news.

The Purdue CW faculty stands w our creative writing students and their wild, demonstrable successes. We will fight publicly and privately until this administration recognizes the immense harm their de facto shuttering of our entire program will cause. https://t.co/DLi7sDImx8

“I think that this stuff matters,” Chernin said. “I think the Sycamore Review, writing and art and being able to think critically and process the world around us matters. It's very devastating to know that the people who run the College of Liberal Arts don't seem to agree with that statement.”

In her three years at Purdue, Khan said, she’s noticed less and less funding and resources being directed toward the English department, despite the success of many of the Creative Writing faculty and students.

“Morale among faculty and graduate students in our department is very, very low,” Armstrong said. “Our department is full of award-winning teachers who care deeply about the quality of education that our undergraduates receive, and it is extremely frustrating that we are unable to give our students the kind of pedagogical experience they deserve for reasons that are completely beyond our control.”