A former Purdue student has sued the University and a former film studies professor in federal court, alleging the professor sexually assaulted and harassed her and that officials granted him tenure despite knowing of similar complaints.

The case, filed Thursday, was filed by attorneys out of California and Fishers, Indiana, on behalf of a woman called Jane Doe in court papers. Documents lay out a series of harassment of the student in 2016 by Lance Duerfahrd.

Purdue officials said Friday that Duerfahrd was a Purdue employee from August 2006 until August 2017.

"Upon receiving notice of the allegations, the university acted swiftly and decisively. In fact, it would be difficult to find a more clear example of Purdue’s intolerance of this type of misconduct," Purdue said in a statement. "Immediately upon learning of the complaint against Mr. Duerfahrd, Purdue placed him on leave, ordered him to have no contact with students, and launched an investigation. Upon conclusion of the investigation, which substantiated the claim, Mr. Duerfahrd resigned under threat of termination. The entire matter was resolved in a matter of months.

"Purdue takes very seriously its responsibility to provide a safe education environment for its students. The university does not and will not tolerate such misconduct by any member of its community, including faculty, regardless of their rank or tenure. This case proves it."

Purdue knew Duerfahrd, who now lives in Massachusetts, had sexually harassed and assaulted female students since at least 2012, according to the complaint. "From that point on, it was clear to the University that Duerfahrd would continue to use his position to stalk and prey on young women in his classes."

Doe arrived at Purdue in fall 2015 and was in Duerfahrd's classes in the fall of 2016, according to the lawsuit. He was an associate professor of film studies, part of the English department, and the director of the film and video studies program.

One instance of the professor's history included an instance in 2011 cited in the complaint. He "habitually" invited female students out for drinks, and in this case, pushed a female graduate student against a wall and groped her breasts without permission. A few minutes later, "he told her he would pay for contact lenses, so that he could better see her beautiful eyes."

In 2012, according to the suit, a female student told her academic adviser she did not want to take a class with Duerfahrd because he had sexually assaulted her, and the adviser relayed that information to at least two other English faculty members.

Doe earned a 3.78 grade point average her first year, after which she decided to double major in film and video studies and creative writing. So in the fall of 2016, she enrolled in two of Duerfahrd's classes.

The complaint lays out several instances of Duerfahrd's unwanted and inappropriate attention to the young woman, including questions about her personal life and information about his own sexual life. When the professor asked her to go drinking with him, offering to give her marijuana, she told him she did not party.

More than once, he allegedly drove her to dark, remote places and to his home, gave her wine and eventually sexually attacked her. During her last meeting with him, he sexually assaulted her and she resisted. He reportedly told her he would no longer help her with class if she would not have sex with him, saying at one point, "I think you want me to rape you."

"Duerfahrd proceeded to brag to colleagues about his purported sexual conquest of Plaintiff," according to the lawsuit. "He made demeaning, inappropriate comments about Plaintiff's genital area."

These events prompted Doe to lose sleep, miss classes and eventually leave Purdue. She has been diagnosed with severe PTSD, major depressive disorder and insomnia.

The lawsuit alleged that "prior to the events with Plaintiff, President (Mitch) Daniels intervened to preserve Duerfahrd's position at Purdue." 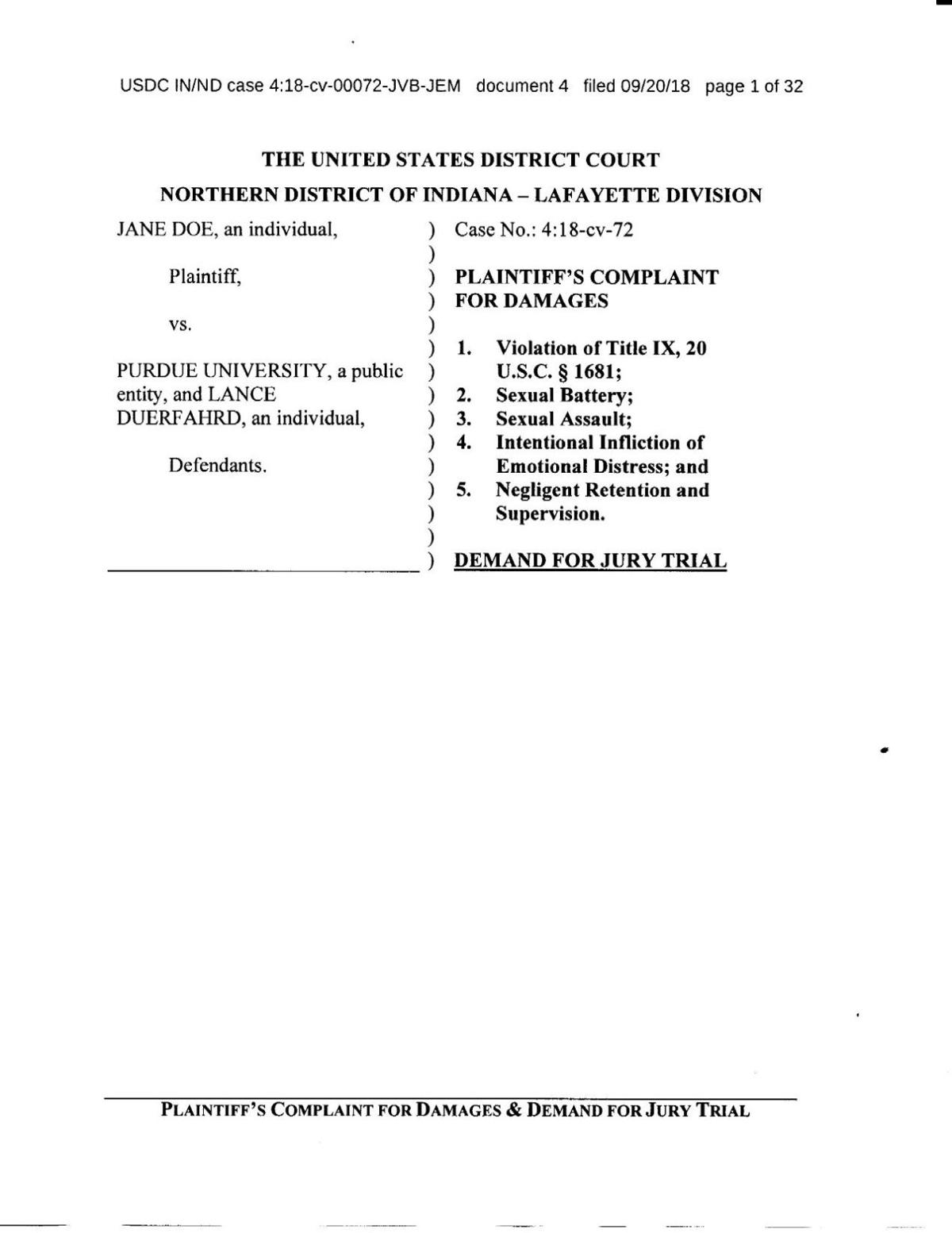