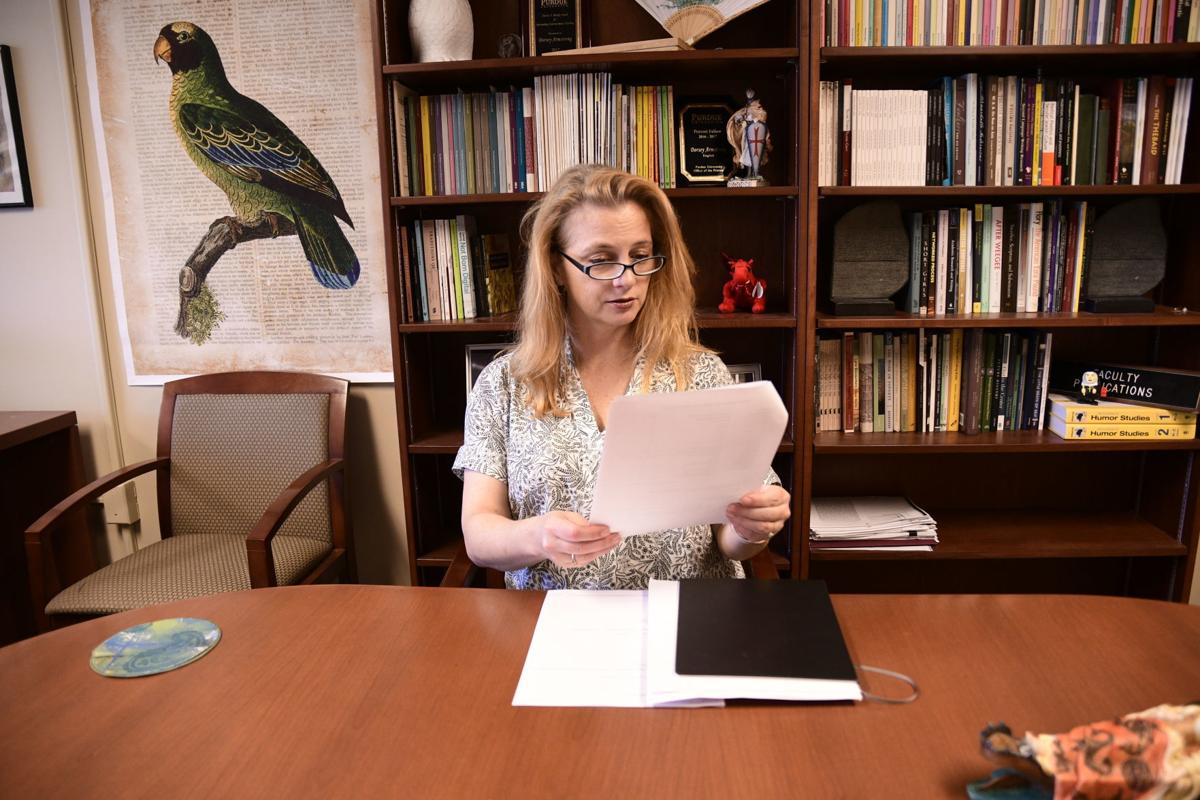 Dorsey Armstrong, the head of the English department, talks about the faculty's frustration with the conditions in Heavilon Hall. 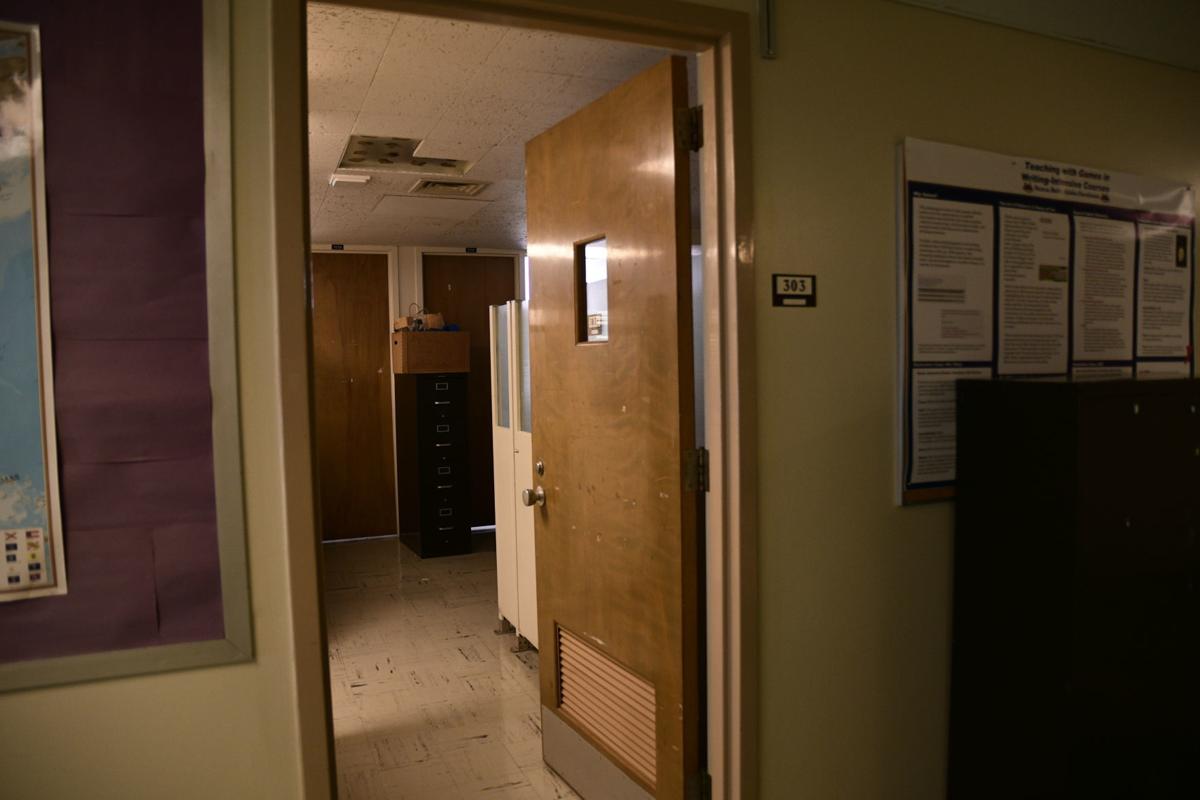 HEAV 303 is molding room that is only used to store the photocopier, according to English Department Head Dorsey Armstrong. It's nearly abandoned as faculty members feel ill when in the room for an extended amount of time.

Dorsey Armstrong, the head of the English department, talks about the faculty's frustration with the conditions in Heavilon Hall.

HEAV 303 is molding room that is only used to store the photocopier, according to English Department Head Dorsey Armstrong. It's nearly abandoned as faculty members feel ill when in the room for an extended amount of time.

Toxic fumes, mold and cockroaches the size of kittens are just a few problems faculty members have reported in an academic building, and nothing seems to be getting done.

Heavilon Hall has major issues that have repeatedly not been addressed, according to Dorsey Armstrong, the head of the English department.

Armstrong has been at Purdue since 2002 and said in her time here, the department has been informed three times of plans for a new building, yet no repairs or construction have ever been done.

She said during her time, there have been several complaints from faculty members about the conditions of the building. Mold, rodents and leaking, burnt-out heating, ventilation and air conditioning units that are too old to replace.

Areas Armstrong specifically pointed out were the writing lab on the second floor of the building, which is leaking fumes, and Room 303, which holds only a photocopier because of its mold problem.

“The situation in this building has become so serious that we now don’t refer (to) the east end or the west end of the building, but rather we refer to the toxic fumes side and the mold side,” Armstrong said.

Plans for a new building were in progress in fall 2017 but were canceled abruptly, according to Armstrong.

“When we’d reached the 90% stage of approving the final plans for the new Heavilon building, we were informed that those plans have been canceled,” Armstrong said. “No reason given.”

The new Heavilon Hall would have cost about $20 million and been 95,000 square feet, according to the 90% finished Feasibility Study draft.

“Since this building was on the list to be demolished and replaced, nothing got fixed. And so now, it’s in worse shape than it was before,” Armstrong said.

In fall 2017, the University registrar did a walkthrough of the building and decided the classrooms were too small, according to Armstrong. The construction of Wilmeth Active Learning Center was almost finished, so officials told the English department it would be able to utilize space in WALC.

Armstrong said the English department lost 15 classrooms in Heavilon Hall over the years due to rooms being too small. The University has reclaimed space on the first floor of Heavilon and converted the rooms into labs, office spaces and other uses.

English professor Charles Ross said faculty members protested the matter at length in 2017. At that time, Michael Johnston, another English professor, set up an online petition.

The petition stated that the faculty “urge the committee to find alternatives that meet the strategic goals of the University without degrading the teaching mission and efficiency of the English Department.”

“Alas, I would not call it a protest, but more of an organized response on the part of our faculty,” Johnston said via email.

Johnston said faculty in the department exchanged emails over the issue, and he collated all the comments into a petition that went out in May 2017.

“This move will cut down on faculty-student interactions,” professor John Duvall said in a comment. “A student is much less likely to walk a quarter of mile to my office to talk about a paper assignment than up one flight of stairs.”

“Having classes close to our offices increases the chance that students will come by our offices for additional help or just to talk about something that they found interesting during class. It helps to build a culture of learning,” she said in a comment.

Ross wanted to tackle the problem in a different manner.

“My idea was, instead, to work through channels, trying to convince those in charge of building and planning space,” he said via email.

When asked if he wanted to discuss further, Ross said, “I think I gave it my all two years ago.”

The department has now formed an ad hoc committee. Armstrong said the committee is temporary and serves solely to gather evidence and write a report about the state of Heavilon. The report will be finished by the end of the semester.

“As of now, we have really only one classroom in Heavilon and that’s 206. Then, we have the computer lab, which is 227,” Armstrong said.

The only other classroom assigned specifically for English classes on campus is WALC 3048.

Armstrong said the schedule deputy, Janeen Redman, desperately tries to find space for the department all over campus.

The dispersal of English classrooms to buildings all over campus has weakened the sense of community, Armstrong said.

Professor Robert Lamb said via email that Heavilon was "once a vibrant place filled with interactions among students and teachers (and) is now a ghost town."

“We’ve lost our hearth,” said Lisa Hartman, who has been assistant to the English department head for over 30 years.

Faculty members used to see each other in the hallways, run into students and past students, have office spaces nearby classrooms and easily interact with one another.

Despite the difficulties, Armstrong said she is proud of all faculty members in the department.

“It’s really hard to maintain, foster and increase a sense of community amongst all the ranks from undergraduates to graduate students, to faculty and staff,” Armstrong said. “It’s kind of lonely actually. I mean, this building feels lonely.”