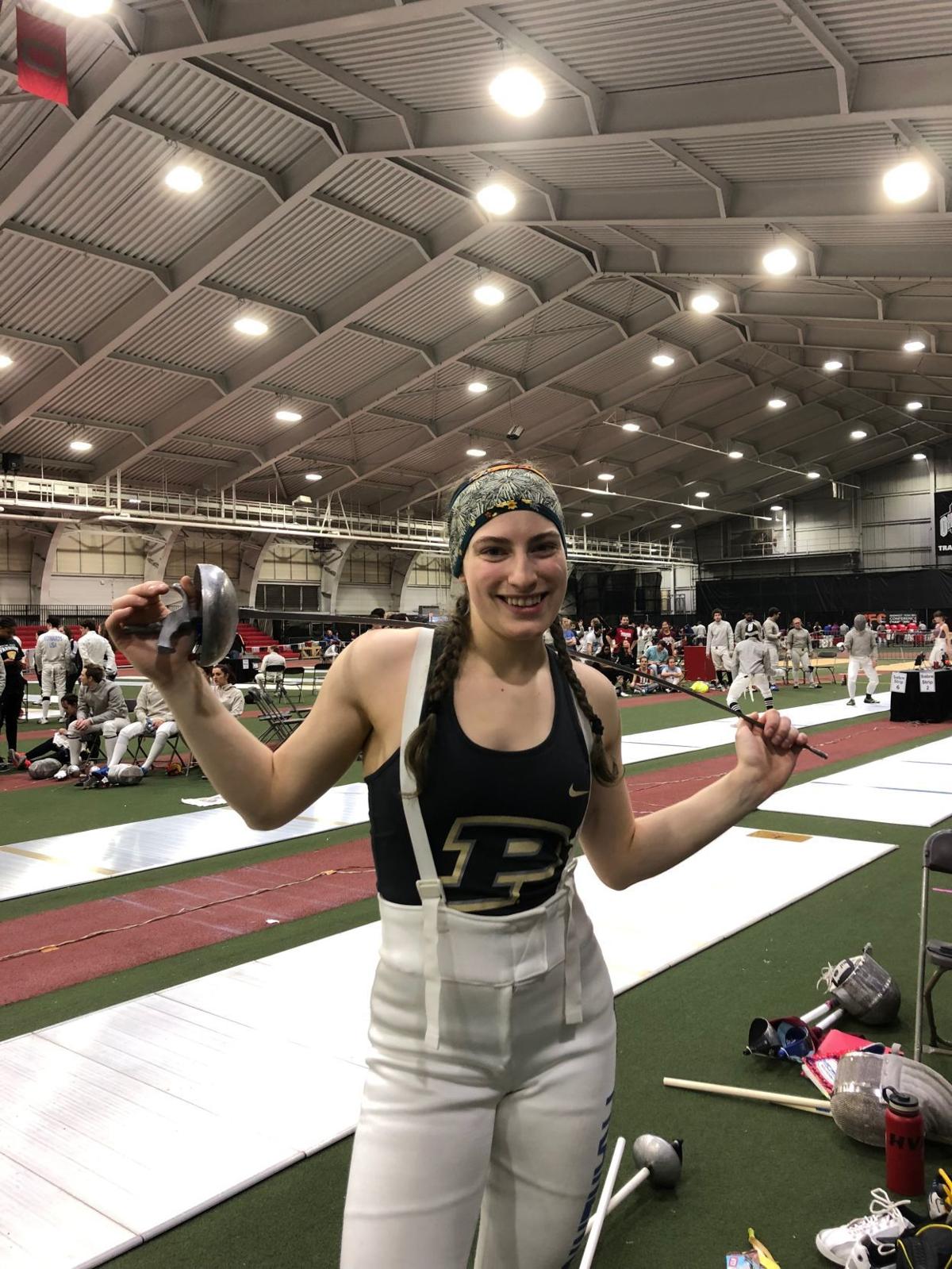 Zoe Franznick, a senior in the College of Liberal Arts and a transfer student, poses in her fencing gear. Franznick is a member of the Purdue Fencing Club. 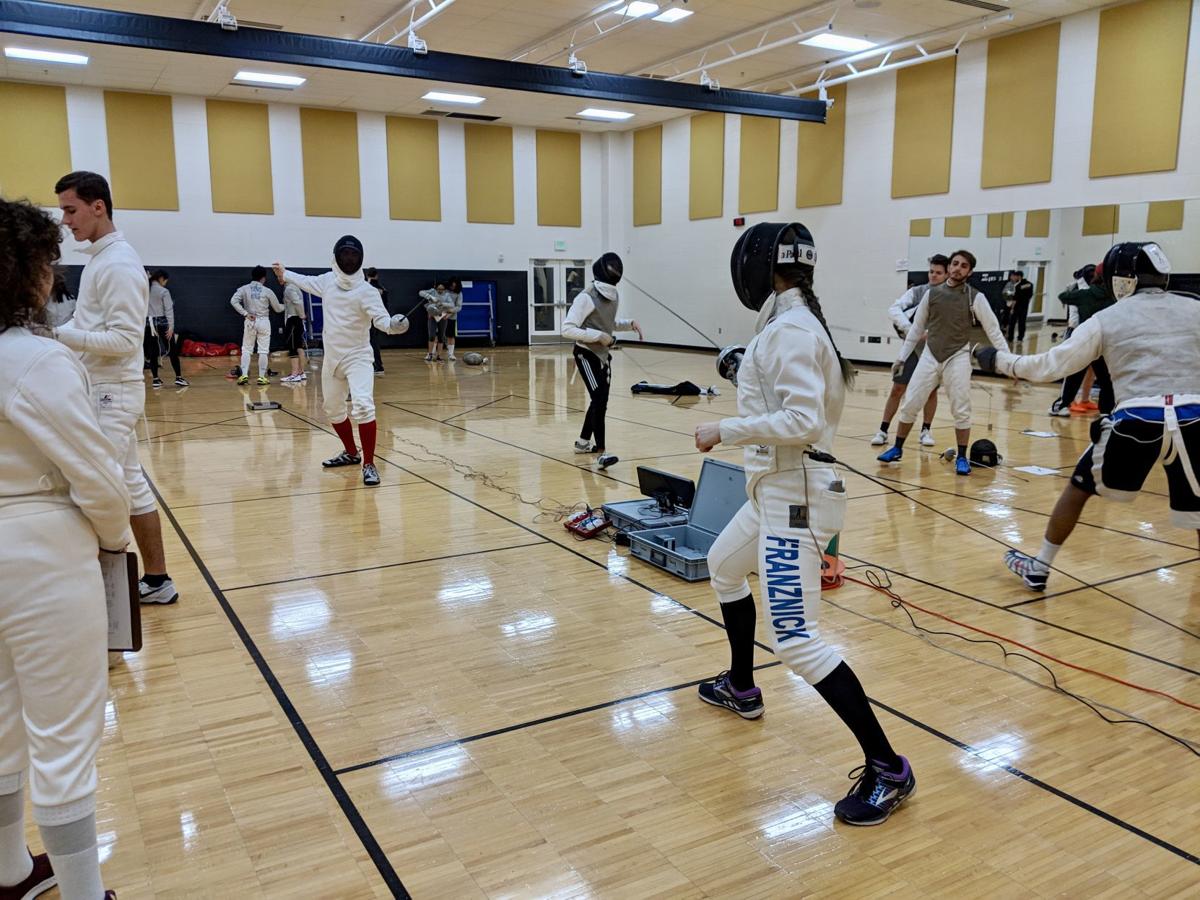 Zoe Franznick, a senior in the College of Liberal Arts and transfer student, practices fencing. Franznick is a member of the Purdue Fencing Club.

Zoe Franznick, a senior in the College of Liberal Arts and a transfer student, poses in her fencing gear. Franznick is a member of the Purdue Fencing Club.

Zoe Franznick, a senior in the College of Liberal Arts and transfer student, practices fencing. Franznick is a member of the Purdue Fencing Club.

Growing up in a small town in Alaska, Zoe Franznick never thought she’d end up in Indiana — but here she is.

Franznick is a transfer student and senior in the College of Liberal Arts studying English literature. According to Purdue enrollment data, roughly 2,700 transfer students matriculated at Purdue in 2018. The numbers haven’t changed much since the earliest available year of 1993, when there were 2,565 total transfer students on campus.

Although Franznick has come to love Purdue and found a welcoming community here, her journey has not been without issue, and her transition to Purdue has been no exception.

Franznick’s college journey began after high school when she matriculated at Seattle University. However, she found that the university was not the right fit for her. A disagreement with Franznick’s roommates over her Christian faith led to administrative complaints and greater issues that made her decide she wanted to leave.

“It was a few bad actors in the students, and the administration took it completely out of control,” Franznick said. “It was difficult as a freshman student not knowing what to do or having outlined what my rights were.”

Franznick went back to her hometown of Palmer, Alaska, where she took two semesters of classes at Matanuska–Susitna College, a satellite campus of the University of Alaska Anchorage. According to Franznick, the Alaskan university system is not very good for English majors, so she was hoping to transfer to a university outside Alaska to finish her degree. She mostly took general education courses with the hope that they would transfer to whichever university she would eventually go to.

“As an English major, (the University of Alaska system was) not really where I wanted to be,” Franznick said.

Franznick was torn between English and commercial aviation as a major. She found Purdue was a good option for her because it offers both English and professional flight majors.

West Lafayette is far from Alaska, so flying to Purdue can be very expensive. Franznick found it prohibitively expensive to come to Purdue for both Summer Transition, Advising and Registration and Boiler Gold Rush, so she decided not to participate in BGR.

She found the transition to Purdue to be difficult in some respects. It was like taking a “giant leap,” Franznick joked.

Franznick didn’t learn she was accepted to Purdue until after the University housing deadline had passed, so she had to find an apartment on her own. She also had to transport her things over a great distance and buy new clothes since she didn’t have many for warmer weather.

Her transfer credits caused her particular concern. Many of them did not transfer and she found herself having to take courses she felt were too easy. And though Franznick initially intended to double major in English and history, she found it was only feasible to take one major, so she settled on English literature.

“I couldn’t do what’s supposedly the point of college ... which is to ... go explore your interests, take some classes that you think you would like and narrow it down to what you want to do,” Franznick said.

Zach Black, senior assistant director of admissions, works for the Purdue Office of Admissions. His specialty is in “special populations,” so he works with non-traditional students such as non-degree students and transfer students.

According to Black, many schools use an online service called Transferology to help students learn whether their credits transfer. Purdue doesn’t use Transferology because the University has its own internal system with two databases. A “Transfer Credit Course Equivalency Guide” allows students to determine how their credits from other schools would transfer to Purdue. Purdue Transfer Equivalency Self Service is a more comprehensive system that allow students to plan out their coursework at Purdue.

“(TESS) is a little bit more involved, but I always recommend our transfer students check it out,” Black said.

Black said transfer students also receive a credit evaluation report once they are admitted, but he recommends they use TESS before they are admitted so they have an understanding of how many of their credits will transfer.

Franznick found difficulty getting involved with student organizations. She noted that club callouts often aren’t publicized well enough, and information on BoilerLink is often out of date. Despite her initial troubles, Franznick eventually joined the Purdue Fencing Club.

“It took a while to figure that out and get plugged in there,” Franznick said.

Franznick said not being able to participate in BGR played a role in her difficulties at Purdue. For one thing, she didn’t have any friends in West Lafayette when she first started school at Purdue.

“There was definitely an aspect of loneliness, especially in the first month of being here,” Franznick said.

She noted that not having a personal connection with people at Purdue is one of the main reasons why a transfer student would feel like they aren’t part of the community.

“Even if you’ve only transferred just one time, you’re sort of disenchanted with the university you’re transferring from, so if you don’t have a community that embraces you at whatever new university you’re in, you retain that cynicism,” Franznick said.

“It’s like Purdue cares more about the freshmen they’re bringing in than anyone else,” Franznick said. “You sort of get the impression that transfers are second-class citizens within the University community.”

According to Black, the Office of Admissions handles recruiting and admissions, but Student Success Programs handles things once students are admitted and matriculate.

Student Success did not respond to requests for comment, citing that the office is busy with preparations for STAR.

Although Franznick thinks an office for transfer students wouldn’t be necessary, she said she thinks it would be beneficial to have a student organization or some sort of resource to bring transfer students together and inform their decisions.

“Some sort of contact to have for transfer students for them to get involved and actually meet each other,” Franznick said.

“It’s something we would love to do here at Purdue, but it’s just there are (issues with) logistical resources that come with being a big university that has kind of hampered that a little bit,” Black said.

Black said he encourages prospective transfer students to reach out to the Office of Admissions and departmental recruiters for information and assistance.

“Our advice to transfer students is be proactive in this process,” Black said. “Purdue is definitely getting better at helping students acclimate to being here on campus, but a lot of it is students need to be proactive as well.”

Despite her troubles, Franznick has come to find a home at Purdue. For one thing, she has been able to find new friends on campus.

“I love the Midwest,” Franznick said. “Everyone’s so friendly. So I ended up making friends pretty quickly.”

“There’s a lot more diversity of opinion,” Franznick said. “The community is so welcoming.”

Franznick said she has felt welcome in every friend group and club of which she has been a part.

“There’s a bigger sense of being a Boilermaker that actually starts to matter,” Franznick said. “I think once I started getting that was when I really started feeling like, ‘Oh okay, I can sort of call myself a Boilermaker right now.’”

After graduation, Franznick will go to Trinity College in Dublin to study for her master’s degree in philosophy. Then, she may return to Purdue to start graduate studies here. While she is still considering her future career options, she is interested in diverse career paths including academia and game design, combining her interests in board games, medieval history and literature.

Although she has faced difficulties in her experiences as a transfer student, Franznick is appreciative of the opportunities Purdue has given her and hopes her story will help inform future Purdue transfer students.