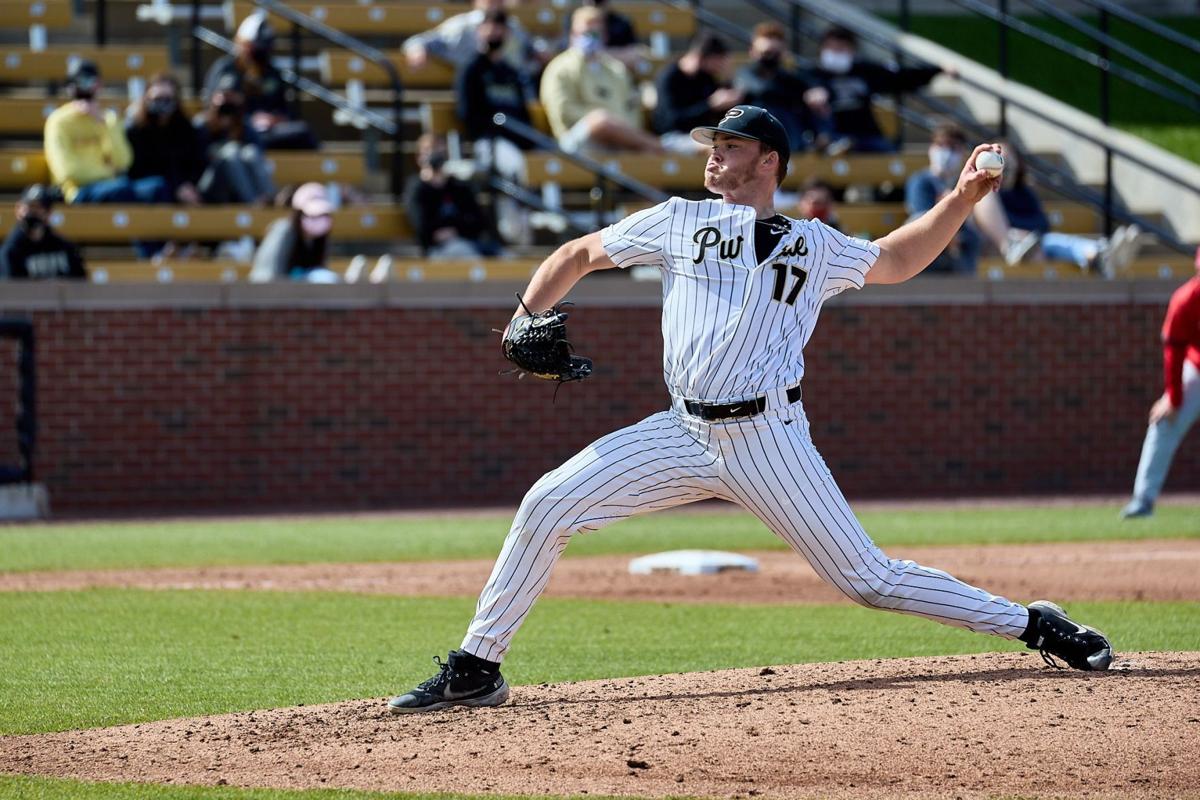 Jackson Smeltz pitches in a May game again Ohio State. 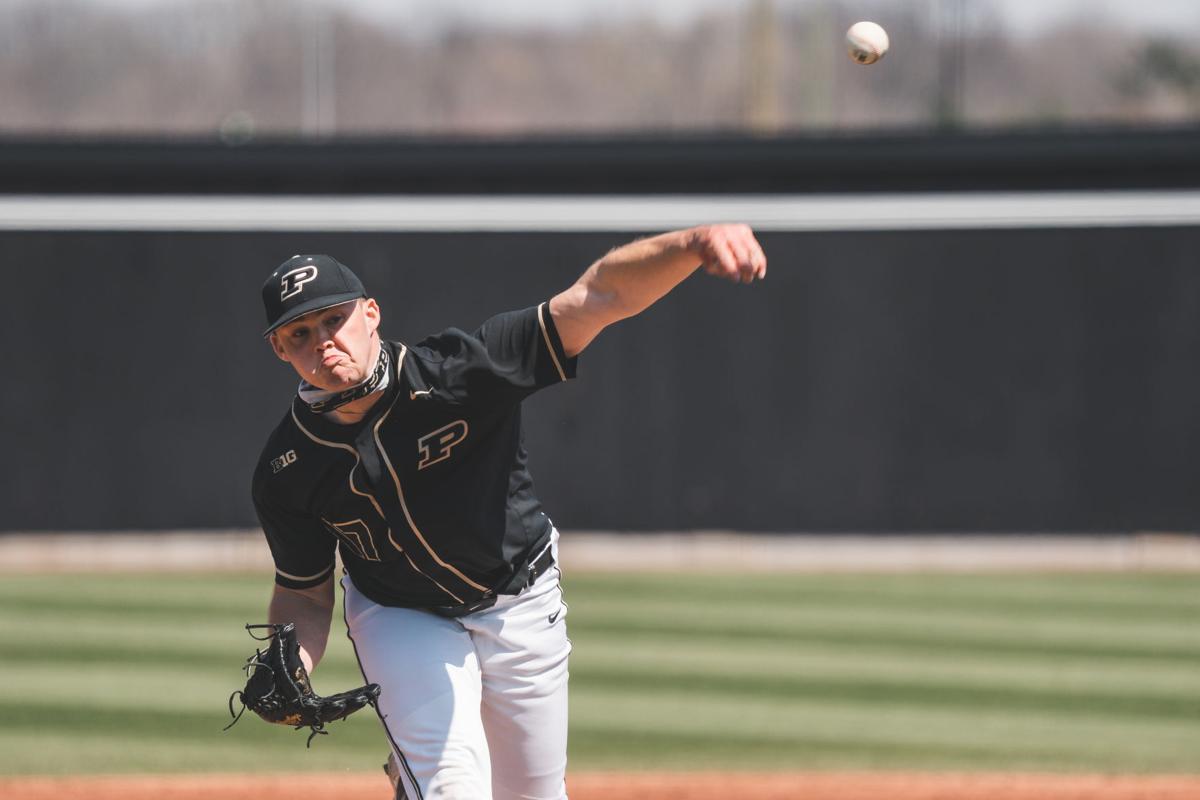 Jackson Smeltz throws the ball during a Purdue baseball game.

Jackson Smeltz pitches in a May game again Ohio State.

Jackson Smeltz throws the ball during a Purdue baseball game.

Jackson Smeltz stands outside his Lafayette home, throwing a baseball back and forth with his father. To the father-son duo, it’s a normal day. To people watching, it looks more like dodgeball than baseball.

Purdue pitcher Jackson Smeltz, 22, and his father, Bobby, 58, still enjoy their time playing together, even though Bobby can’t see as well as he once could.

Bobby said his coworker refers to their playing time as “dodgeball” because he’s just trying to dodge the baseball coming at him from his son.

“He can’t see as well as he used to, so it’s kind of scary for him,” Jackson said in a Zoom call. “But he would do anything for me, and he kind of sparked my interest and love for baseball.”

Jackson said he doesn’t try to go easy on his dad, either.

“Last week we were playing catch and it was literally right in his chest, and he couldn’t see it. It hit him,” Jackson said, a slight smile forming across his face. “I feel really bad but he loves it. I’m not gonna stop — I’m just gonna try to not hit him in the face.”

Their playing time is not only a father-son bonding time, though. It’s also a chance for Jackson to work on his pitching, especially after many injuries have sidelined him from the game during his life.

In June, Jackson received the Thomas A. Brady, MD Comeback Scholarship Award, which is given to athletes who overcame adversity or injury and returned to play at a high level in their sport.

Smeltz has undergone multiple surgeries since the age of 13. It began with surgery to remove a noncancerous brain tumor, and continued in Tommy John surgery after his freshman season at McCutcheon High School and a recent hip surgery that was delayed by the pandemic.

“I’m an older guy now in college, but I still haven’t pitched as much as some of the people that are younger than me because I was out,” Jackson, said. “I think the first time I pitched in a game was last year and before that I hadn’t pitched in a real game in like five years.”

Bobby said Jackson pitched more games in his freshman year high school than in the following years of his career combined.

When he was finally able to return to the game, the season itself ended abruptly because of the COVID-19 pandemic.

Despite all the setbacks, Jackson said he’s lucky because the challenges have brought positive change into other areas of his life.

“I was able to find a way to persevere, get better living habits, and be able to control exactly what I can control,” he said. “Like how much I exercise, what I ate. I didn’t have the luxury of partying and all that because I couldn’t afford to do that.

“In my experience, God has always had a plan for me and I know that’s just the route. The route I’m on right now is the route I’m supposed to be on.”

Growing into an athlete

Bobby Smeltz said he could see as Jackson grew up that he would love baseball, though he recalls not really picturing him becoming an athlete at first.

“He was always a really talented baseball player, but I didn’t know that he would be this kind of athlete,” Bobby said, chuckling over the phone. “He’s going to hate me for saying this but he was more of a pudgy kid. Not the most athletic looking kid, but he could sure hit and throw a ball.”

Jackson’s older brother played baseball, too, though Bobby recalled that at those games, Jackson would be off playing catch on the sidelines rather than watching the game.

“Honestly, at 5, 6, 7 years old, we’d have as many people watching him throw as were watching the game,” Bobby said. “Just because, even at 5 or 6, he just looked different. He looked like he knew what he was doing.”

Through all the injuries, though, Bobby said Jackson’s baseball career has been anything but easy.

“I’ve actually thought Jackson’s career was over about 20 to 25 times,” Bobby said, his voice lowering as he contemplated the tough times they went through as a family.

“I’ve experienced that feeling that it was over a lot of times. And believe me, for a parent that loves to watch your kid play, that’s very hard to go through.”

Jackson’s father said he still thinks his son will continue playing baseball in the future.

“Somebody as dedicated to what they’re doing as he is, he will have to have multiple people say he can’t do it or we don’t have a place for you anymore,” Bobby said. “The game, after a while, tells you that. Hopefully he will have to have somebody tell him that or he’ll realize it himself before he’ll quit.”

“My dream has always been to go pro,” he said. “I wanted to be a professional baseball player since I was little, so I’m gonna pursue that dream until I can’t.”

Success on and off the field

Jackson’s academic plans for the future, despite his major in agribusiness, is to eventually go to medical school, he said.

The decision to take the prerequisites for medical school was inspired by his dealings with many doctors over his different injuries, he said. Now, he wants to become a family doctor or pediatrician.

“I’ve had some really awesome doctors, and I’ve had some doctors that weren’t awesome, but I know the impact that a doctor has on someone,” he said. “It can change your life, it really can. And some of the doctors that I’ve had over the years have been such a positive impact on my life and I want to be able to do that for other people.

“And I know how it feels to be frustrated with a doctor or to be hurt by a doctor and I don’t want that for other people.”

Jackson’s family doctor, Dr. Darren Reed, in Lafayette, is one of the good doctors Jackson said he has had.

“I’m not just a name on a piece of paper or someone he has to see,” Jackson said. “He is really invested in his patients, and I want to be just like that.”

Reed was one of the main doctors to help Jackson through one of his lowest periods — a brain tumor at 13.

“Before I had brain surgery I would have just terrible headaches,” Jackson said. “There was a year or two where I barely left my room. He helped me through a lot of that, he sent me to people I should see (and) he did everything he could to help me out in the headaches.”

The Exponent reached out to Reed but was told he would be unable to comment due to HIPAA.

By credits, Jackson will be a senior this year at Purdue, though he’ll be a redshirt junior on the field.

Jackson credits his 3.62 GPA and his ability to succeed as a student while balancing athletics to asking for help when he needs it, specifically by getting tutors for classes.

“Throughout my college career, I’ve had to utilize that a lot — almost with every class,” he said. “I’d say three or four classes a year, and that’s really helped.

He said the other thing student athletes have to consider is time management.

“If you have a two hour break,” he said, “you need to be doing something.”

Jackson said the biggest factor in helping him through the years of health issues has been his Christian faith.

A member of Northview Church in Lafayette, Jackson said he turned to God when he was 13, spending time alone, away from school, friends and sports, before his brain surgery.

“I don’t know how many surgeries I’ve had or how many times I had to sit out, but I’m almost thankful for those things, because it led me to my faith,” Jackson said. “It led me to Jesus Christ. I want to point everything back to him in every aspect of my life and that’s who I go to.”

Jackson’s advice to any athlete or student who may be struggling to find balance in their life was to look outside of your sport to find what makes you happy.

“The thing that I would say to anyone playing a college sport, or struggling with who they are, or their academics and balancing time, is you can’t find your happiness or your self worth in your sport, because eventually that’s going to run out,” he said.

His father said he’s also noticed the strong faith in his son, and how it has grown through his hardships.

“He’s always been a little different that way, and maybe just because he’s had to rely on something different, something higher, just to get through these tough experiences,” Bobby said. “I think he’s really leaned into that hard, and I think it’s also served him well.”

The one thing that both Jackson and Bobby mentioned, though, is that Jackson took the bad from his situation and made the best of it.

“He’s told me before that, ‘I wouldn’t be where I am today if not for all the bad crap that has happened to me,’” Bobby said. “His work ethic is what’s brought him to where he is and why he’s so competitive.”

Jackson said he tried to work harder, too, at least so he wouldn’t fall behind his peers.

“The only way I was gonna make it to where I am now is to work harder than everyone else,” Jackson said. “I had to, or else there’s just no way this is possible. (The injuries) did set me back, but (they) also allowed me to grow in ways that I never would have been able to without it.”

“He’s all in on everything,” he said, “and I think that’s because of everything that’s happened to him.”