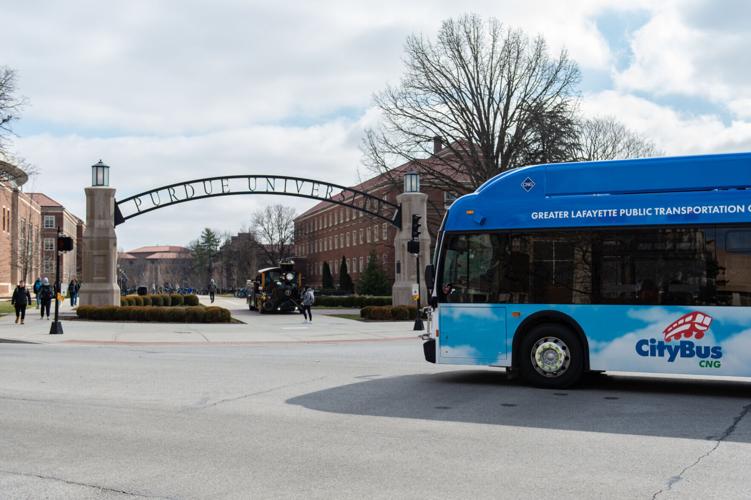 A silver loop bus passes by the Gateway to the Future arch. 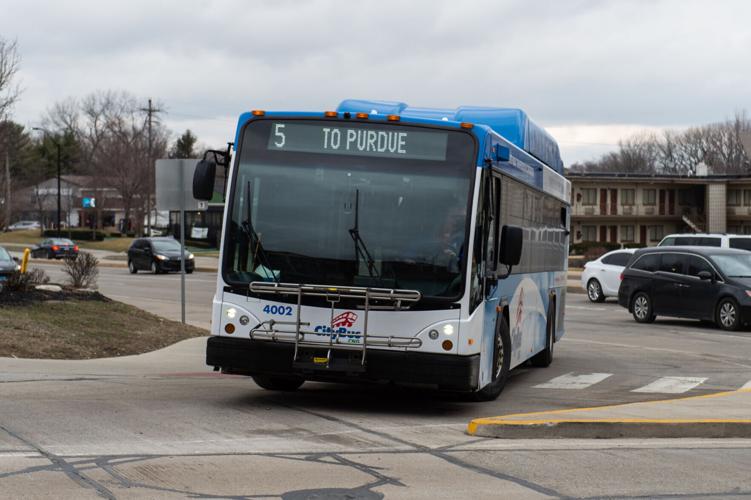 A CityBus on the Happy Hollow route the corner from River Road onto State Street, heading toward Purdue’s campus.

A silver loop bus passes by the Gateway to the Future arch.

A CityBus on the Happy Hollow route the corner from River Road onto State Street, heading toward Purdue’s campus.

Editor’s Note: This is the third installment in a series exploring climate solutions proposed by Purdue students and experts across the country.

Purdue’s climate action plan, released by a group of College of Engineering students in early April, explores how methods of transportation contribute to greenhouse emissions around West Lafayette, offering a few possible solutions.

Students collaborated with the Purdue Environmental and Ecological Engineering department and the Purdue Transportation Department to estimate transportation-related emissions.

The heaviest emissions come from individual vehicles, bus routes both on- and off-campus as well as driving and idling vehicles, according to the report. Personal vehicles emit 19,270 metric tons of CO2 equivalent annually.

CO2e is the standard way of measuring total emissions emitted from various greenhouse gasses other than carbon dioxide, like methane and nitrous oxide.

Regardless of the individual nature of transportation emissions, the students incorporated several ideas to encourage the reduction of these emissions.

Students involved in the CAP said they believe that if Purdue negotiated a deal with Spin scooters, similar to the current partnership between Purdue and CityBus, more students would be willing to use them as a means of transportation.

“Purdue’s students get to go on (CityBus) for free,” Bhoopalam said. “Perhaps for the Spin scooters, Purdue students could get a discount or some sort of thing.”

The CAP also proposes using bike-sharing services, similar to the Spin scooters, to encourage the use of public transportation.

“There’s some systems like (Spin scooters), but for bikes, so you could scan a QR code, and there’d be a station with a bunch of bikes in it,” Bhoopalam said. “And then you could pay for however long you’re using it, and then you’d go to drop it off at another station.”

Increasing the reliability of CityBus by extending routes and frequency would make the bus system easier to use, the students said. By improving the public transportation options around campus, more students would switch from driving to taking the bus, reducing individual vehicle carbon emissions.

The CAP also suggests the costs of such partnerships could be paid for by increasing parking ticket fees.

The CAP doesn’t include any financial breakdown for these transportation solutions including the parking fees.

“The reason we didn’t include (the financial breakdown) is because we didn’t actually include the transportation emissions into Purdue emissions,” Bhoopalam said.

Carbon credits for travel is one solution offered by Timothy Cason, a professor in the Krannert School of Management. For a university’s faculty to travel as much as Purdue’s does, requiring carbon credits would be a relatively simple solution for reducing one’s carbon footprint, Cason said.

“As a faculty member who does a lot of traveling,” he said, “Purdue will pay for my travel, but I can’t get my carbon emissions for that travel reimbursed.”

Cason said requiring carbon credits for travel, reimbursing the driver for carbon credits they purchase to offset the carbon emissions, is one way Purdue could come closer to carbon neutrality.

The University of Notre Dame piloted an electric vehicle program in July to promote efficiency and sustainability, according to a press release by Electric Last Mile Solutions, Inc.

The Electric Vehicle Campus program lasted four weeks, during which time, “not only will universities have a chance to pilot the ELMS all-electric Urban Delivery van,” Ron Feldeisen, the chief revenue officer of ELMS, said in a press release in October, “but they will also receive a comprehensive assessment of their current fleet so they can better understand where they can achieve cost savings and drive better business by going electric.”

The program had the initial goal of lowering costs for the university and accelerating its sustainability goal, according to a press release.

ELMS reduced carbon emissions by lowering the cost of Notre Dame’s vehicles, lowering costs in both fuel and maintenance and in ownership.

The program was deemed a success and has since been offered nationwide to colleges and universities aiming to reach sustainability goals.