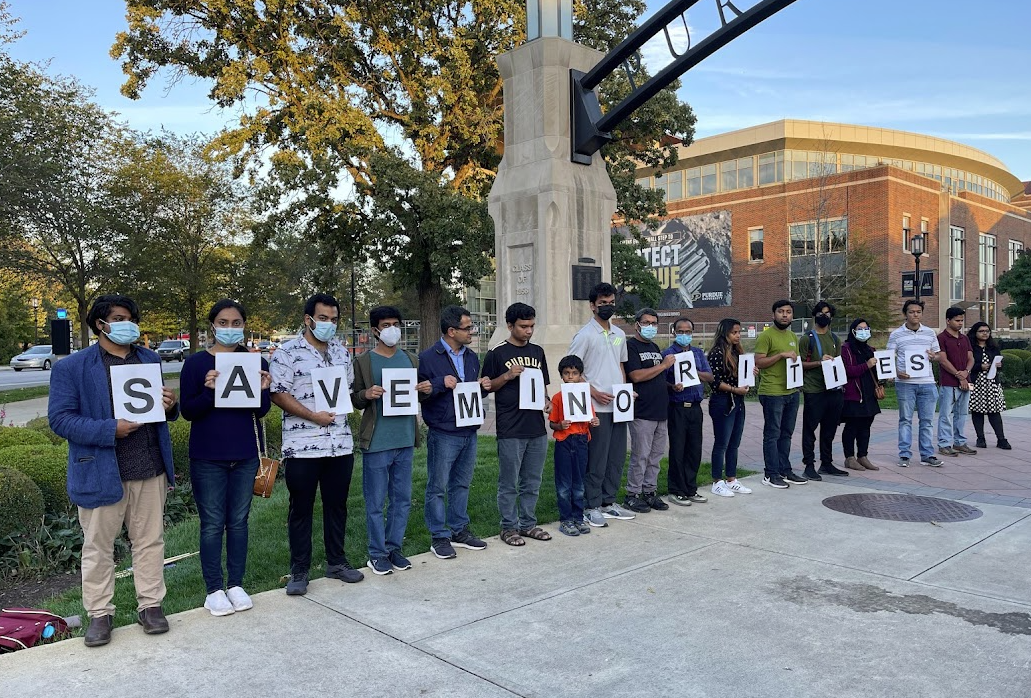 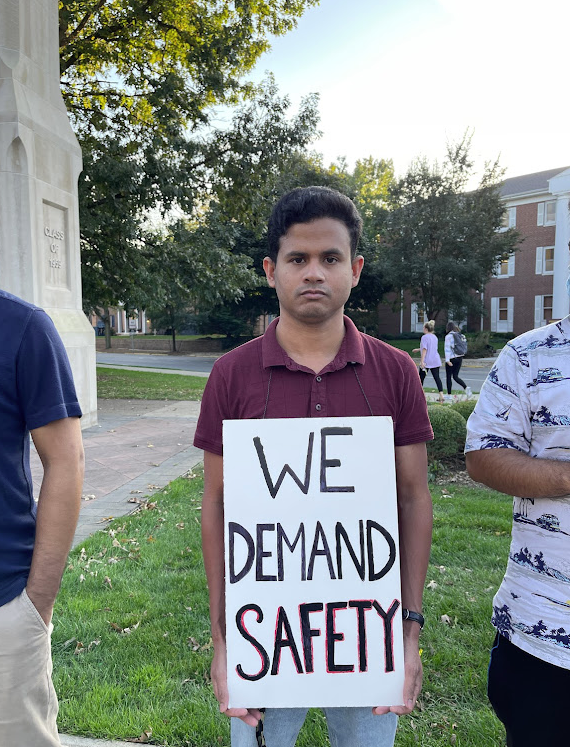 A member of Bangladesh Student Association holds a sign in solidarity. 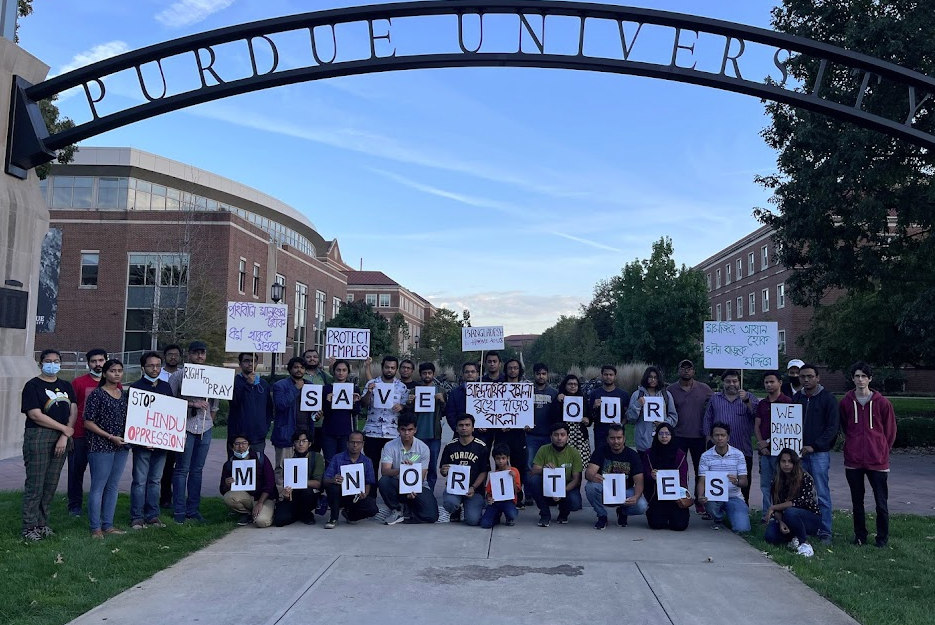 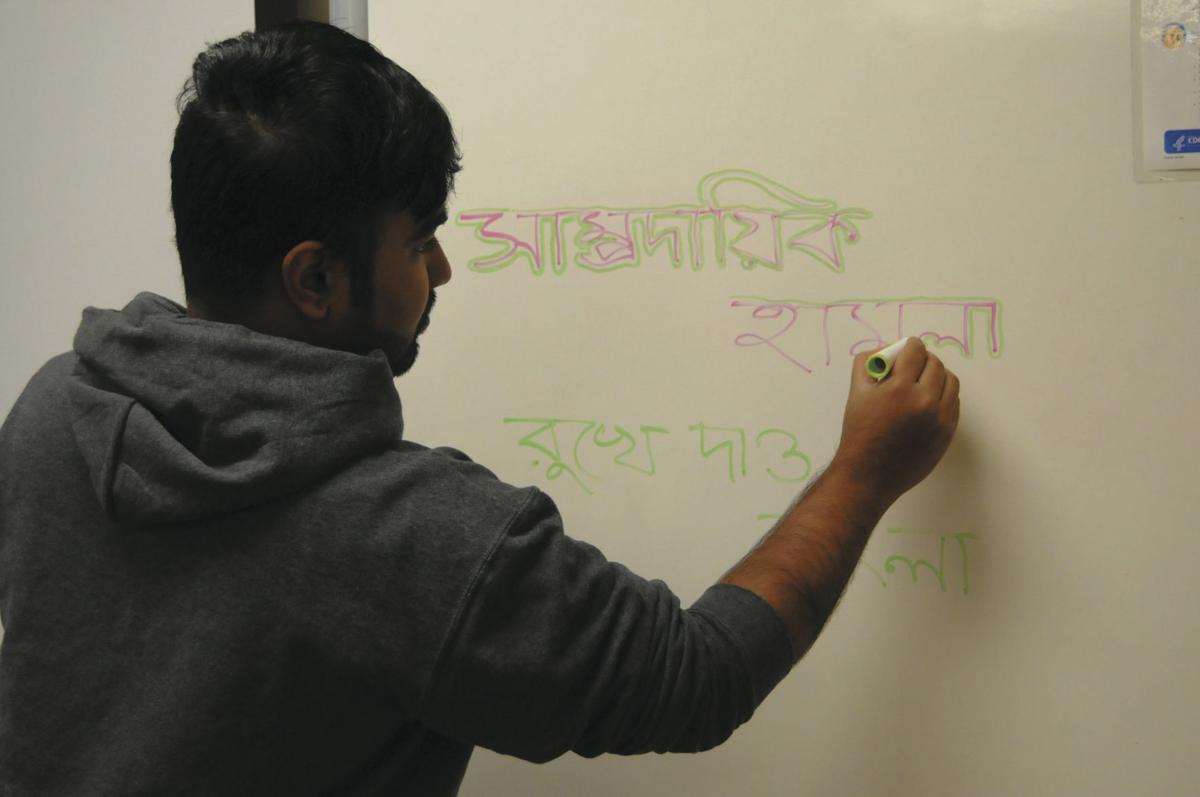 A member of Bangladesh Student Association holds a sign in solidarity.

Bangladesh student associations are organizing protests on campuses around the country, including Purdue, yet not many people know about them or their stories.

Bangladeshi police arrested hundreds of people for charges ranging from attacking, to raiding and burning homes, to raping Hindu people, who are a minority population in Bangladesh, according to reporting by the BBC.

The attacks began after a picture of a Quran on the feet of a statue of a Hindu deity in Cumilla, a Bangladeshi city, spread on social media among fundamentalist Muslims, according to reporting by the Associated Press.

News of the attacks has been slow to spread. AP reports that local Bangladeshi media has underreported it because of pressure by the predominantly Muslim government. Purdue students say the same.

Some of the students that came to the protest contacted their families at home to see if they were OK, and that was the first time some of the families heard about the attacks because of the media blackout, electrical and computer engineering graduate student Tridib Saha said.

Normally, when there is a crisis in a student’s hometown, the Office of the Department of Students reaches out to offer support, but Bari said he hasn’t heard anything.

ODOS directed a call for comment to Purdue Spokesperson Tim Doty, who was unaware of the incidents in Bangladesh and has not yet contacted back with further information.

Saha was in New Jersey with his wife, Medha Ghose, when he found out.

Ghose’s family lives in Cumilla and was at the site where the attacks broke an hour before they started, Saha said. They are all OK, but he is worried for all of her family’s neighbors.

The attacks came in the middle of Durga Puja, also known as Durgotsava or Sharodotsava, an annual Hindu festival that pays homage to the Hindu goddess Durga, according to previous Exponent reporting.

“It’s like our Christmas,” Saha said. “But all the excitement has gone down. It doesn’t feel right to celebrate.”

Saha is a continuing lecturer, so he said he had to come back the day after he got the news and continue teaching. He stays in contact with Ghose constantly so they can support each other, but staying busy helps him cope.

A long-time Bangladesh Student Association member, and former president, Saha said he helped coordinate a protest with other Bangladeshi students.

He said he wanted to see the other Bangladeshi students, know how they were doing, hear about their families and discuss what change they wanted to see.

BDSA posted to its Facebook page Monday that the club would meet to make signs and banners Tuesday night before its protest Wednesday, he said.

About 20 to 30 people showed up to show solidarity, Saha said. Fortunately, nobody there had family directly affected, but some had neighborhoods that were. Those that came were a mix of Hindus, Muslims and Buddhists.

“We were seeing the unity within ourselves,” Saha said. “We wanted to show that the unrest created was not something we would tolerate.”

The protest was also meant to raise awareness and call on the Bangladesh government to hold the attackers accountable.

“One part of our demonstration was (directed) to our people, (to tell them) that’s what’s happening,” Bari said. “It’s to raise international awareness, so that the government feels that they should do something because we have seen this kind of thing before.”

Even though they know they can’t change anything at home by themselves, Saha said the BDSA wanted their protest to be part of a larger movement.

“There aren’t a huge number of Bangladeshis at Purdue,” Saha said. “As we created content, we wanted to see if other universities were doing the same.”

“We are really small, in that perspective,” Bari said, “but together we are not that small.”

Bangladeshi student associations have been posting photos of their own protests throughout the last week.

Saha and Bari said similar organizations at North Dakota State University, Northwestern University, New York University and the Massachusetts Institute of Technology have had protests and more are planned for Rensselaer Polytechnic Institute and IUPUI.

“Minorities are people, too, and we deserve the freedom to pray,” Saha said. “Whoever is a Bangladeshi anywhere is protesting this.”