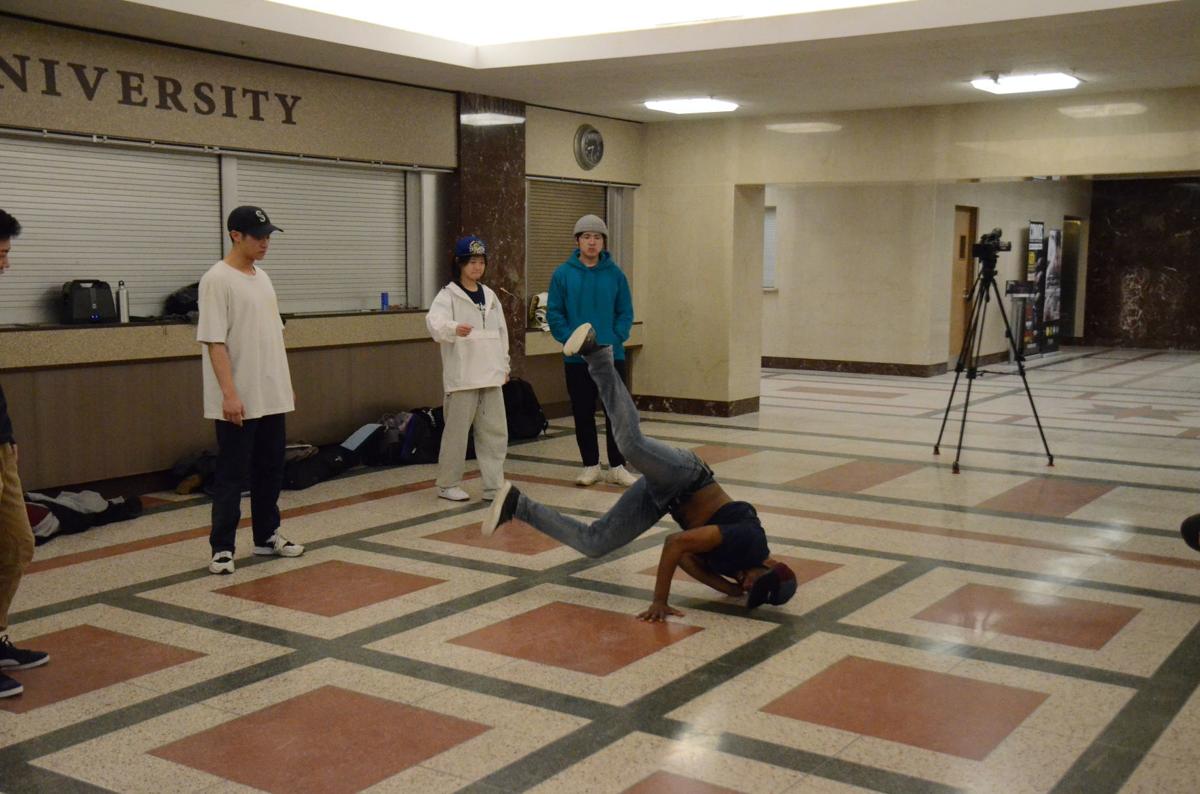 John Andjaba shows off his moves while break dancing in Stewart Center. 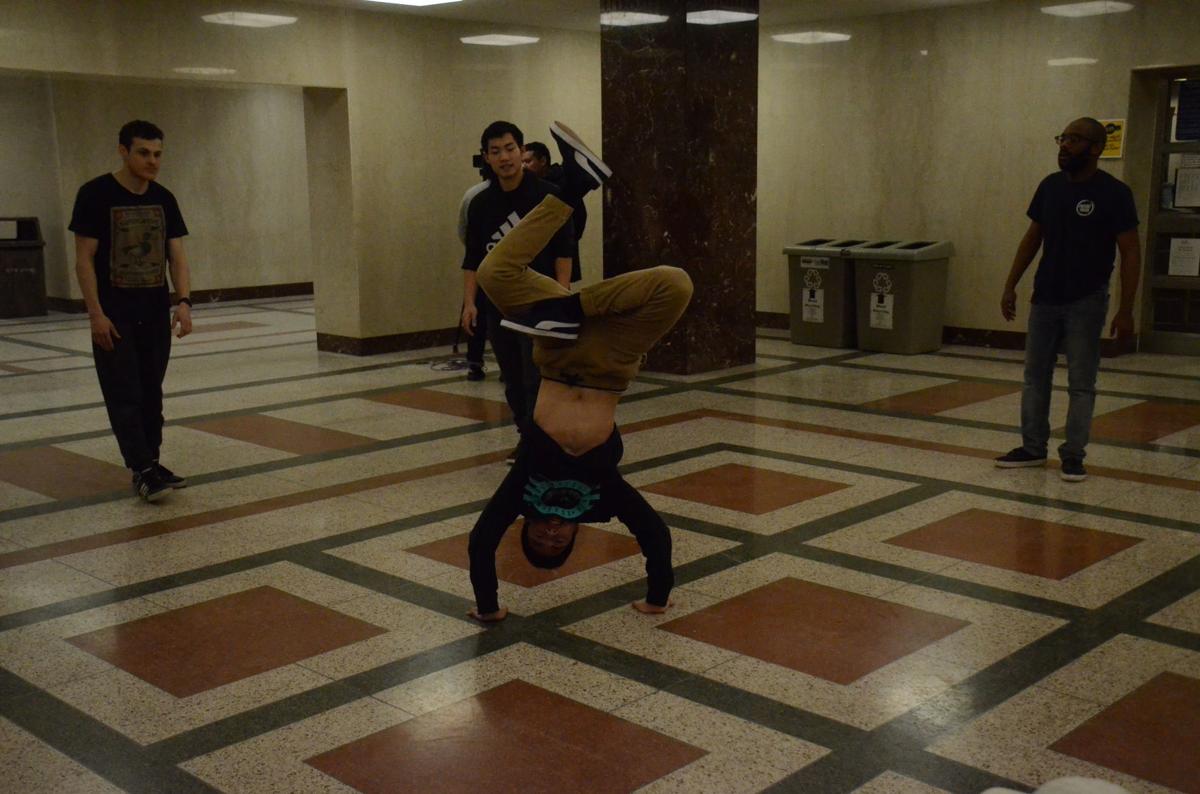 A member of the Purdue Association of Hip Hop Practitioners and Scholars break dances in the hallways of Stewart Center.

John Andjaba shows off his moves while break dancing in Stewart Center.

A member of the Purdue Association of Hip Hop Practitioners and Scholars break dances in the hallways of Stewart Center.

Members of Purdue’s Association of Hip Hop Practitioners and Scholars took part in a breakdance or breaking battle against Indiana University Sunday in Indianapolis.

The organization, which used to be called the Purdue Boiler Breakers, now includes more than just breaking.

For example, popping is a different dance style than breaking, and there are several poppers in the club, according to Saad Mukhtar, a graduate student in the College of Liberal Arts and the president of the association. The old name, which only included breaking, was too narrow, he said.

Nowadays breaking battles like the one between IU and Purdue are often set up, but Mukhtar has been involved in several spontaneous dance battles before, which he said he finds more enjoyable.

“For me, and my experience, battles have kind of always (come) about naturally and in non-sports related spaces, or not set up. They happened naturally,” Mukhtar said. “For example, two rival teams are at some party or at some dance event, and they might have heard of one another. So maybe one person doesn’t like another person. So maybe they might start to compete against one another, and everything is nonverbal. It’s all through movement, all through the dance moves.”

This happened to Mukhtar, he said, at breaking group Rock Steady crew’s anniversary in New York City, when someone did a dance and pointed at Mukhtar, indicating that he wanted to battle Mukhtar.

Mukhtar said he used to dance at community events in Philadelphia, and even had a dance battle in South Korea back in 2004.

Though Mukhtar doesn’t break anymore, he has researched hip-hop culture, which has four elements: breaking, DJing, emceeing and graffitiing.

“When somebody says hip-hop, they automatically think (of) the musical genre, but breaking is a part of hip-hop culture. So it’s one of the elements,” Mukhtar said. “It’s becoming, I would say, the second most popular behind rapping or emceeing, and the reason why I say that, is because this past summer, it was in the Youth Olympics in Argentina. So there’s been a big push to get breaking at the Olympics level, and they succeeded in passing the first stage to get that done for 2024 in Paris.”

When Mukhtar was younger, there wasn’t a way to make a living out of breaking, he said. Now that breaking is being considered for the Olympics, it’s become a more lucrative form of dance, with studios becoming more common, according to Mukhtar. Even so, there is some disagreement as to whether or not breaking should be in the Olympics.

Some in the breaking community want to go to the Olympics, Mukhtar said, while others consider breaking an art form instead of a sport.

“Some people that really take it seriously ... hip hop is a way for them to express themselves in a positive way,” Mukhtar said. “And then we have, for example, college students, where they’re just like, ‘Hey I want to participate in the culture, but I don’t really want to be engulfed in the culture.’ … so there’s kind of this fine line.”

Breaking also is called B-boying by some, and many B-boys or B-girls may have stage names.

“Pretty much every breaker has a B-boy or B-girl name,” Mukhtar said. “I tend not to use B-boy or B-girl because I see everyone as just a dancer. So I don’t ... distinguish gender norms between everybody. So I just say, breaker and breaking.”

John Andjaba, a third-year graduate student in the College of Science, goes by the name B-boy Sweat Rock, because he sweats a lot, Mukhtar said.

“Most of ... the breakers … in the club, they all have a stage name and even just that in itself is kind of cool, because it’s like an alter ego,” Mukhtar said.

The alter ego that a stage name offers isn’t the only heroic thing about breaking. Daniel Yang, a fifth-year graduate student in the College of Science and Krannert School of Management, enjoys the physical fitness and the athleticism that breaking requires.

“It’s kind of like when you’re little, you kind of want to be a superhero and stuff like that,” Yang said about the physicality of breaking.

“The way I like to describe it, it’s like trying to sprint, all while looking cool, all while doing it to music,” Andjaba said.

Mason Pellegrini, a first-year graduate student in the College of Liberal Arts, said he enjoys more than just the exercise dancing offers.

“One thing that I really like is the community,” Pellegrini said. “It’s just so much fun. All these guys are so nice. We just come here, and for two hours, twice a week, we just dance.”

Mukhtar expressed the possibility for the association to expand, which may include starting future Big Ten associations and having battles with them. Aside from that, he said the Purdue association is a place where people who like hip hop can come together.

“The way I envision it is that there might be people that are into hip hop on Purdue’s campus that don’t have (another) club to gravitate to,” Mukhtar said.