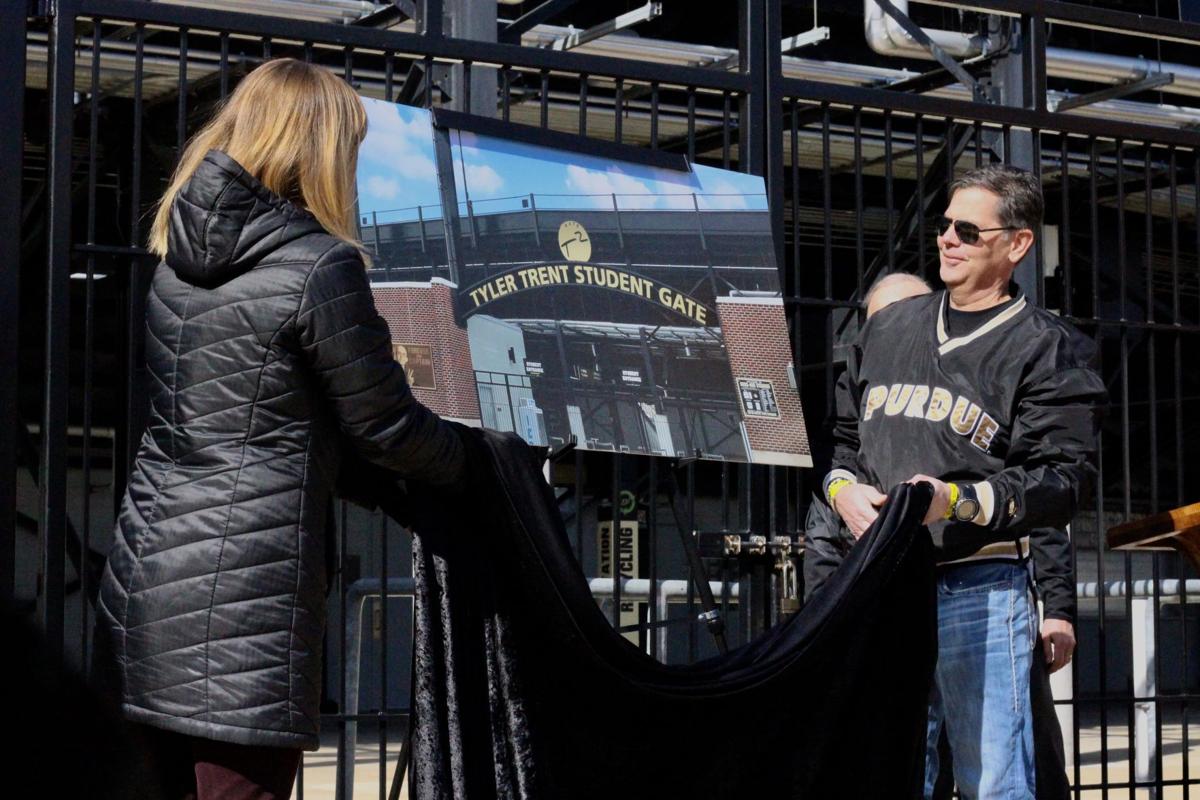 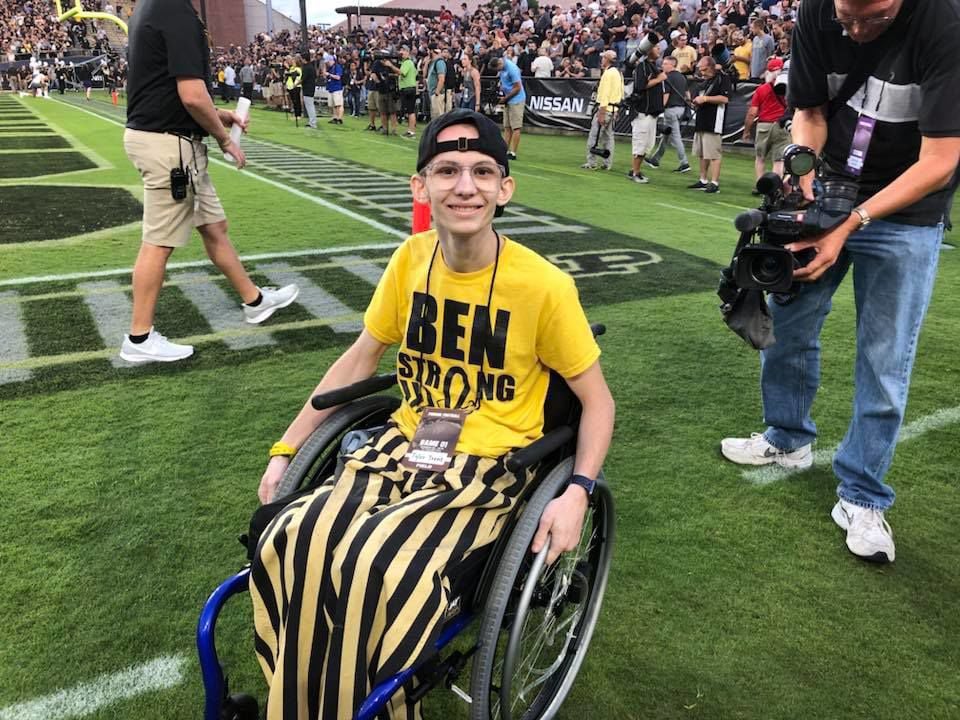 Tyler Trent was an honorary team captain at the Hammer Down Cancer during the 2018 football season. 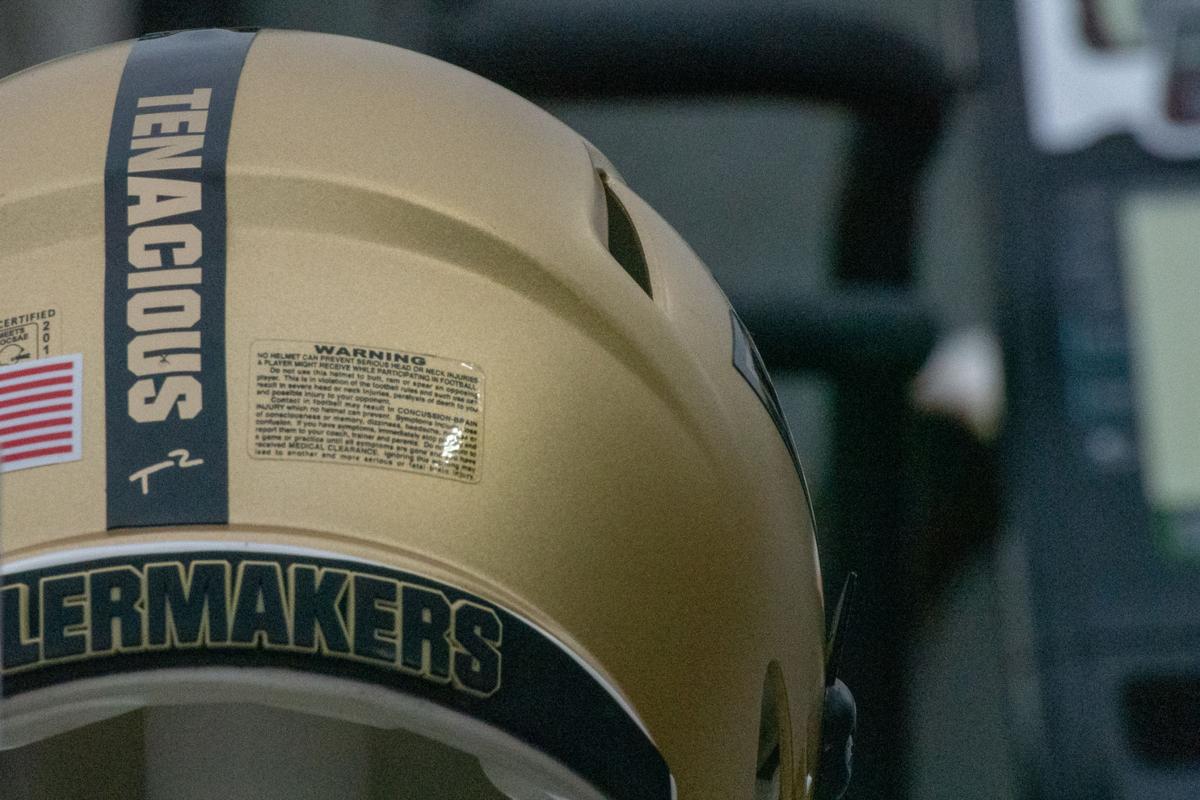 Purdue football helmets had T2 stickers with various other words on them for the Wisconsin game. They were being worn in honor of Tyler Trent a Purdue student suffering from bone cancer.

Purdue will honor Tyler Trent, a Purdue alumnus, former Exponent columnist and cancer advocate, with an entrance gate to Ross-Ade Stadium named in his memory.

Gate E will feature a steel archway donated by Mike Berghoff, chairman of the Board of Trustees, with "T2," Trent's signature, emblazoned across it in gold lettering, according to Purdue President Mitch Daniels' announcement at Ross-Ade Stadium this morning.

Dubbed the Tyler Trent Memorial Gate, the memorial will also include a plaque attached to the side of Ross-Ade's brick wall. The plaque will feature Trent's image and read "Forever Our Captain," in honor of Trent's commitment to Purdue Athletics and honorary title for many Purdue games.

Daniels also announced the recipient of the Tyler Trent Courage and Resilience Award, a scholarship that funds a student's tuition, room and board.

The first student to earn this scholarship was Sean English, a freshman in Exploratory Studies.

"At the end of the day, this honor, and this award that I'm winning, will go way beyond any monetary value," English said.

English earned the award both through his academic prowess and through the hardships he's faced, as he lost his right leg below the knee in a car accident in 2017. He recounted the story of how he was struck by a vehicle while helping people in an overturned car on the side of the road.

The project is expected to be completed in time for the fall football season.

A memorial service was held for Tyler Trent on January 8th at College Park Church in Carmel, Indiana.

Tyler Trent, 20, the Purdue Superfan who captured the nation's attention for his battle with bone cancer, has died. Here are some photos of Tr…

Purdue alumnus Tyler Trent was the 2018 Music City Bowl honorary captain. He flew a private jet provided by the Indianapolis Colts to make it …

The Purdue and Auburn football teams along with many fans of each team gathered together for a coaches luncheon at the Opryland Hotel. Guests …

Talent, laughter and — most importantly — support for cancer research could all be found at …

When you’ve walked for over 70 miles in a span for 48 hours, pain is insurmountable. Aaron L…

Remembering Tyler Trent as much more than an avid sports fan

A frigid breeze blew over the steps of Hovde Hall on Wednesday evening, but Tyler Trent’s br…

Tyler Trent will always be remembered as a Purdue football captain. It was his true passion …

Column: How do we honor Tyler Trent?

Tyler Trent: Trent's legacy at the Center for Cancer Research

Tyler Trent: Trent's legacy in the Center for Cancer Research

The beginning of Tyler Trent’s impact on campus started, perhaps, with the University’s bigg…

Social media reacts to the passing of Tyler Trent

Once the news broke that Tyler Trent had passed away on Jan. 1, the Purdue and college footb…

NASHVILLE, Tenn. — For a story that has captured the hearts of Purdue fans across the countr…

Tyler Trent to appear on SportCenter with Scott Van Pelt

'Why can’t we live grateful lives?'