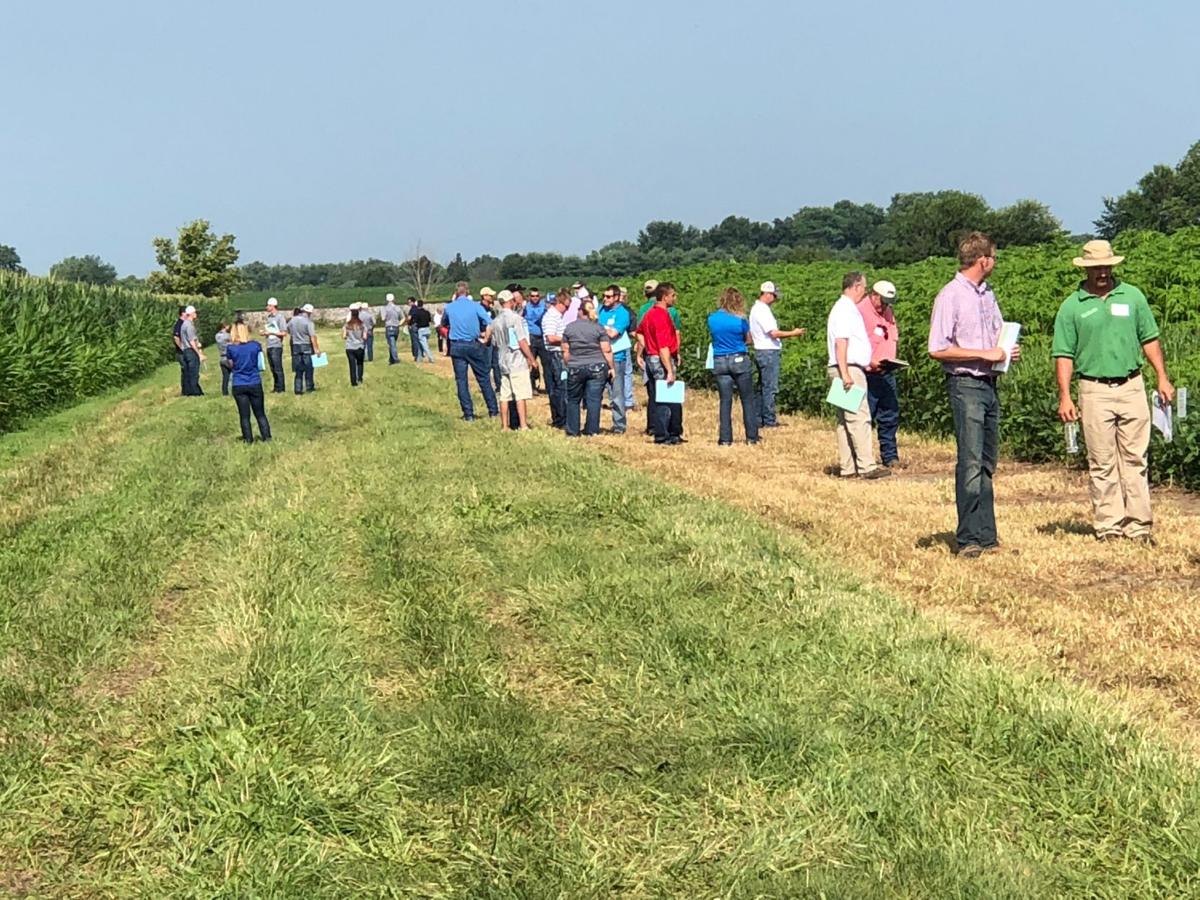 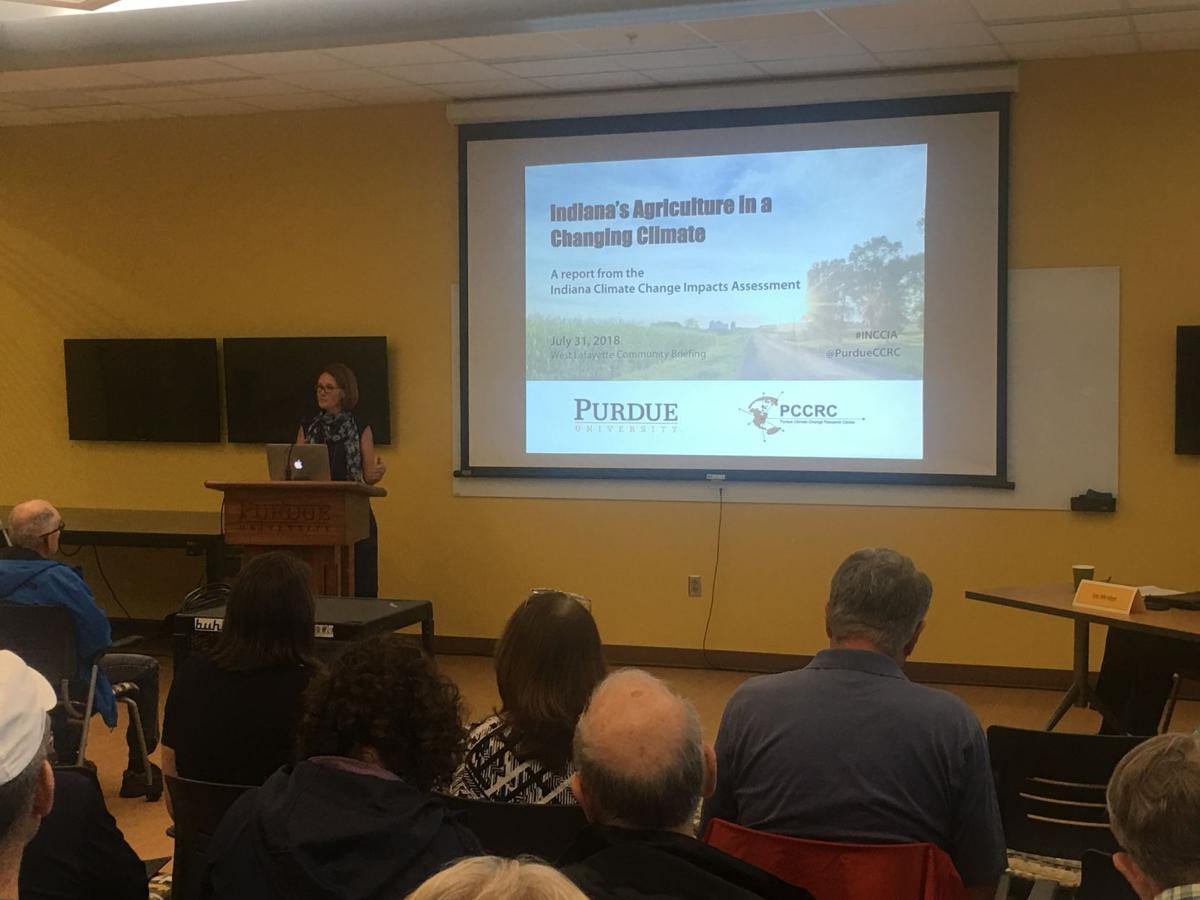 Laura Bowling, the author of the report, gave a presentation to a packed room at the Indiana Corn and Soybean Innovation Center.

The nature of Indiana agriculture is changing.

By mid-century, farmers could be planting crops in early February.

One of the largest agricultural producers in the country, Indiana’s $31-billion-a-year industry is expected to take a hit as longer summers and wetter winters impact the future of Indiana agriculture.

A report from the Indiana Climate Change Impact Assessment working group was released Tuesday morning at a community briefing in the Indiana Corn and Soybean Innovation Center.

Laura Bowling, the author of the report, with assistance from Karen Plaut, Purdue’s dean of agriculture, and Jeffrey Dukes, the director of the Purdue Climate Change research center, shared their group’s findings and broke down the not-so-distant future of Indiana agriculture and the ways farmers will need to adapt.

With warmer temperatures come longer growing periods. While many may welcome longer summer days, by mid-century these summers will become detrimental to crop yields.

According to the report, farmers could be able to begin planting one month earlier than normal by around 2050. Though they usually begin to plant when the ground temperature averages around 50 degrees in early March, these temperatures are projected to begin in early February, according to the presentation.

On the other end, winters will be warmer as the first “killing frost,” the point at which perennial trees and vine fruit enter dormancy, is projected to occur 10 days later by mid-century. In addition, because of the warmer winter temperatures, plants will be able to break dormancy two weeks earlier. Unfortunately, this means many fruit crops will begin to flower before the risk of frost damage has passed.

“By mid-century,” the report says, “reduced chilling in some areas of Indiana may no longer meet the requirement for bud emergence for some varieties of apples, peaches and grapes.”

These rising temperatures result in increased plant respiration, which in turn lowers the amount of sugar available for grain production. These conditions lower crop yields by affecting both the timing and success rate of pollination.

Heat stress is expected to worsen and also increase in frequency. By mid-century, corn yields will reduce by 16 to 20 percent and soybean yields will drop by 9 to 11 percent.

Livestock to feel the heat

Increasing summer temperatures mean a higher number of days with extreme heat for livestock. Livestock experiences heat stress at anything higher than 86 degrees. Heat stress can cause livestock to eat less as well as lose productivity and fertility, according to the report.

Currently, there are around 40 days every year over 86 degrees, but by mid-century, that number could be 80 to 100 days.

During the community briefing, Bowling pointed out cooling blankets will likely be one way to counter heat stress. Energy, maintenance and operating costs are all expected to rise for farmers to ensure proper micro-climates. Improved ventilation systems are also another option to help livestock, the report says.

Foraging will also become an issue for livestock, with the warmer temperatures affecting the health of plants. Both overall growth and milk production is expected to suffer as plant protein decreases and neutral detergent fiber levels increase.

As average temperatures increase, winter temperatures increase as well, bringing more rain and less snow. By mid-century, as winter and spring precipitation increases drainflow 30 to 50 percent, drains will be overwhelmed and fields will lose valuable nutrients for crops.

The report says that by applying in-field and edge-of-field conservation practices, farmers can avoid some nutrient loss.

Despite the increasing temperatures, there may not be a drastic shift in average planting dates, as increased spring rainfall may restrict access to fields.

To cope with wetter springs, farmers will need to further invest in extra subsurface drainage and more durable machinery to aid in field access. The report notes spring fieldwork will continue to decline as it has over the past 30 years, according to IN CCIA research.