Purdue and more than a dozen other higher education and nonprofit entities filed a federal lawsuit Monday against the U.S. Department of Labor and its secretary, Eugene Scalia, after its early October ruling "dramatically" raised wage levels for foreign national employees nationwide.

The Department of Labor posted its interim final ruling first on Oct. 6 and made it effective two days later, the lawsuit alleges, without allowing the public enough time to comment or respond. The ruling allows a 30-day period for public comment while the rule has already been made effective on Oct. 8.

Filed in district court in Washington, D.C., the complaint alleges the "IFR was made effective immediately and was unlawfully and intentionally meant to upset the U.S. labor market and disrupt the way businesses operate. 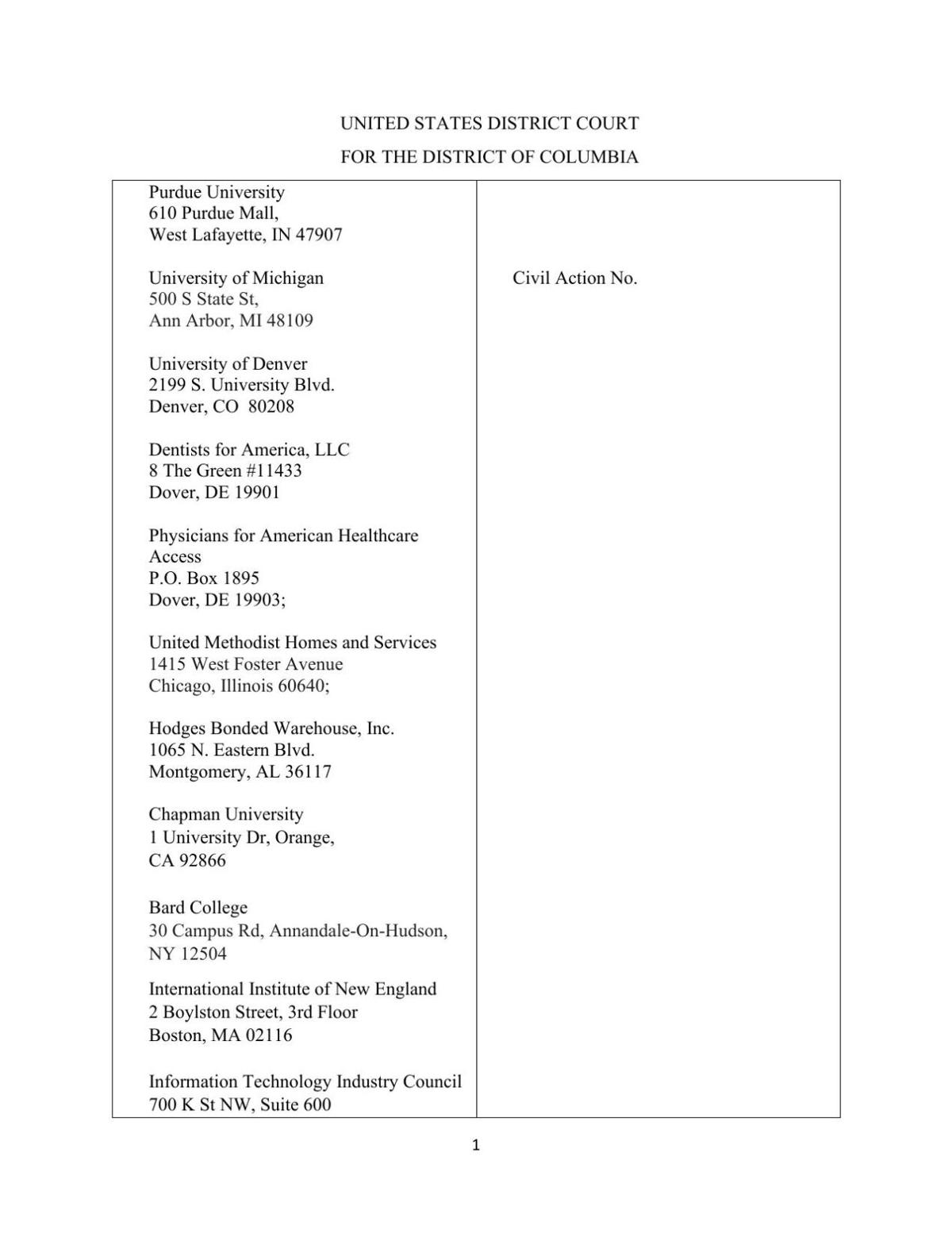 "Plaintiffs represent a wide cross-section of academic institutions, businesses, organizations, and trade associations that have and will continue to suffer irreparable harm due to the unlawful process and substantive changes under the IFR."

Wages for Purdue's faculty, regardless of home country, are "already as high as is feasible," the complaint alleges. The filing states that if the federally mandated wage increases affect Purdue's ability to hire international faculty, many of the University's efforts to create a high-quality learning environment will be dashed.

"Additionally," the complaint states, "the IFR’s negative impact will extend beyond that of the University’s H-1B faculty, staff, and postdoctoral scholars because the wage increases will necessitate increases to all comparable workers, and the cumulative effect of the resulting compensation adjustments will pose an impracticable financial burden."

The complaint does not specify how much employee salaries will jump under the federal ruling. The Exponent reached out to the International Students and Scholars office and a Purdue spokesperson for comment and details on how the ruling specifically affects Purdue employees, but did not receive a response immediately Tuesday morning.

Other universities involved in the case provided comparative numbers for the now-effective salary hike in the complaint.

The lawsuit describes before-and-after wages for the salaries of a civil engineer faculty member for comparison. Level 3 wages for the engineer were set at $70,491 for an entire year as of Oct. 7; as of the new ruling, that salary jumps to $158,392, according to court documents.

Foreign workers enrolled in the H-1B nonimmigrant visa program are allowed to enroll in specialty occupations in the U.S., per federal guidelines. Historically, the secretary of labor provides four levels of wages employers must follow.

In the preamble to the ruling, the Department of Labor states that "the existing wage levels — set at approximately the 17th, 34th, 50th, and 67th percentiles — have been in place for over 20 years, and that many employers likely have longstanding practices of paying their foreign workers at the rates produced by the current levels.

"Adjusting the levels to the 45th, 62nd, 78th, and 95th percentiles represents a significant change, and may result in some employers modifying their use of the H-1B and PERM programs. It will also likely result in higher personnel costs for some employers. ... However, to the extent employers have reliance interests in the existing levels, the Department has determined that setting the wage levels in a manner that is consistent with the text of the INA and that advances the statute’s purpose of protecting U.S. workers outweighs such interests and justifies such increased costs."

The federal ruling also states that artificially low prevailing wages have given U.S. employers the ability to hire and pay foreign workers much less than what their U.S. counterparts earn, creating an inherent incentive for U.S. employers to prefer hiring foreign employees.

The filed complaint argues the labor department provides no evidence to back claims that the federal ruling will balance foreign and U.S. salaries.

The plaintiffs also allege that the higher salaries will hurt foreign employees working in rural areas of the U.S., such as international physicians who have just graduated from college.

"Approximately 1/3 of the U.S. physician workforce is comprised of international medical graduates," the complaint states. "These physicians are not only working on the frontlines of the COVID-19 response, but also dedicate their lives to the provision of health care in our most vulnerable and underserved medical populations in the U.S. These wages force U.S. employers to default to a $208,000/year default for not only our U.S. residents and fellows in training, but also our practicing physicians.

"Under the IFR, foreign medical graduates must be paid a minimum of $208,000 per year despite only having just graduated medical school, which is dramatically higher than the market rate for these employees and clearly more than rural hospital and medical centers are able to pay."

Plaintiffs include other colleges such as Indiana University, the University of Michigan and Bard College, and organizations including Dentists for America and United Methodist Homes and Services, according to court documents.