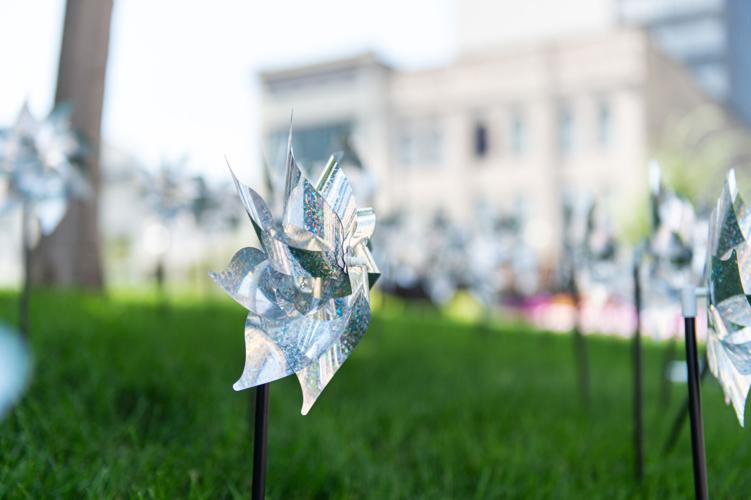 192 pinwheels were set up in front of the Courthouse to represent the number of deaths from overdosing in the past five years in Tippecanoe county. 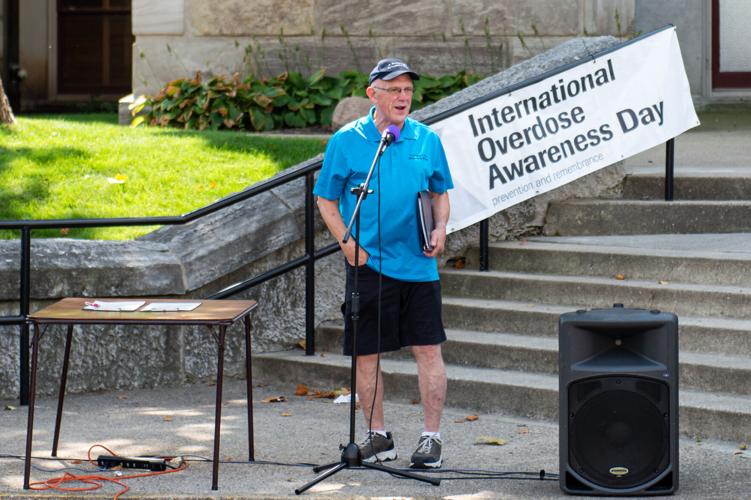 Randy Davis talks about the need to get over the social stigma surrounding addiction and to get people to accept those struggling with addiction as human beings. 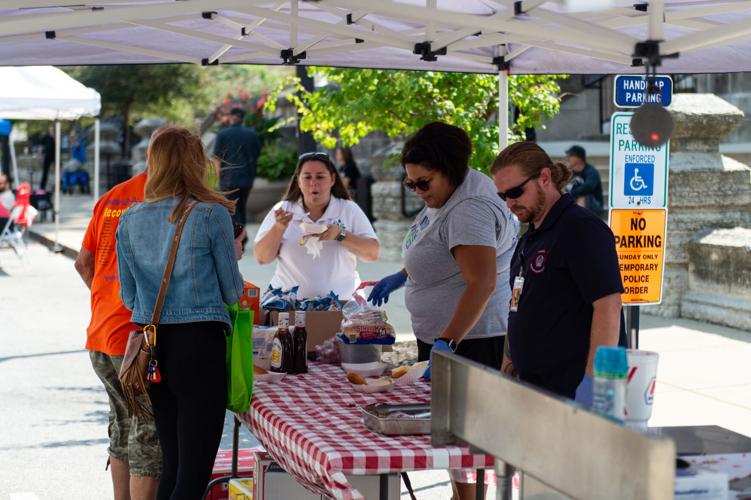 Members of Phoenix Paramedic Solutions make and pass out pork sandwiches to those attending the Drug Overdose Awareness Event.

192 pinwheels were set up in front of the Courthouse to represent the number of deaths from overdosing in the past five years in Tippecanoe county.

Randy Davis talks about the need to get over the social stigma surrounding addiction and to get people to accept those struggling with addiction as human beings.

Members of Phoenix Paramedic Solutions make and pass out pork sandwiches to those attending the Drug Overdose Awareness Event.

Two large blue banners hung between trees outside the Tippecanoe County Courthouse. Silver stars covered nearly every inch of the banner, each one representing an overdose death in the county since 2010.

“I’ve given up counting,” Donna Zoss said to a small crowd on Main Street in Lafayette. “I hate to say that this year I had to paint 48 more stars on there.”

Ten minutes later, former pastor Randy Davis asked the crowd of roughly 15 people to raise their hands if they knew any of those 48 people.

Nearly every hand shot into the air.

One of those raising their hand was Kristina Lesley, the director of the Drug-Free Coalition. She and Zoss, chair of the DFCTC hosted the coalition’s eighth annual overdose awareness day Sunday afternoon, featuring a proclamation from West Lafayette Mayor John Dennis, county commissioner David Buyers and Lafayette City Clerk Sydney Marie – who was filling in for Lafayette Mayor Tony Roswarski – officially designating the countywide holiday as the last Sunday of August.

About a dozen tents and tables lined a section of Main Street between 3rd and 4th streets. Representatives from organizations such as the Gateway to Hope Syringe Service Program, Narcotics Anonymous, New Leaf Wellness, Mental Health America, IU Health and Valley Oaks passed out flyers, pamphlets and treats, explaining what they do and how they can help in the fight against drug abuse.

“As a community, we understand that addiction, although it is against the law, isn’t always the fault of the victim of that disease,” Dennis said. “We are becoming more acutely aware that drug addiction, substance abuse, alcohol addiction, does not have an ‘-ism.’ It’s not racism, there is no classism. The socioeconomic status means nothing.

“When looking at a problem thinking ‘that doesn’t affect me,’ we have to understand that it absolutely does.”

Forty-eight people died of an overdose in Tippecanoe in 2021, hence the 48 new stars.

“Forty-eight might seem like a low number,” Lesley said. “But that is overdose deaths. That doesn’t count all of the people that overdosed and were saved by Narcan.

“The number would be astronomical (if it includes more than just deaths).”

Lesley said annual overdoses have increased with the rise of fentanyl. The CDC describes fentanyl as “50 times stronger than heroin and 100 times stronger than morphine.” Other opioids like heroin or pain pills can be laced with fentanyl, killing the user without them ever knowing they ingested the drug.

Grace Paton, the harm reduction program manager at Gateway to Hope, said most heroin in Indiana now has fentanyl in it.

“It’s cheap and strong,” she said when asked why it has grown in popularity. “You can put it in anything.”

To combat this, the Drug Free Coalition takes 75% of drug- and alcohol-related countermeasure fees – a court-issued fine given as punishment to a person convicted of a crime – and puts it back into the community, Lesley said. At least 25% of that money goes toward prevention, 25% to law enforcement and 25% to intervention and treatment.

Aside from distributing funds, Lesley tries to bring more awareness to addiction and destigmatize it through events like this one or the Tippecanoe Celebration of Recovery Rally, which will tale place Sept. 17 in Loeb Stadium.

“Our job is to bring together a cross section of our community to combat drug abuse and make it healthier to live and work in Tippecanoe County,” Lesley said.

A significant part of that community is Gateway to Hope. While it’s sometimes referred to as a needle exchange, distributing clean needles to people experiencing addiction in exchange for used needles is just one of the many services Paton and her team provide.

To combat overdoses, the program distributes containers of naloxone, more commonly referred to by the brand name Narcan, and fentanyl test strips. All items come with instructions, and education and training is offered as part of the program.

Those items can be found in lock boxes around Lafayette, near places like the Home For Hope addiction treatment center and LTHC Homeless Services, Lafayette’s homelessness treatment center, Lesley said.

Davis founded A Better Life – Brianna’s Hope after a woman from his hometown of Redkey, Indiana, went missing for 10 weeks. She suffered from a heroin addiction, and while officials couldn’t do a full autopsy because she was found without her head, Davis said her addiction certainly contributed to her death.

The faith-based addiction treatment center, which started eight years ago, has 43 chapters across Indiana, Ohio and West Virginia, including a second Tippecanoe County chapter opening its doors for the first time Sunday night.

As the final speaker, Davis asked the crowd to shout the names of those they’ve lost to drug overdoses.

“We need to stop labeling people,” he said, his voice growing hoarse as he showed more passion. “Too many times, we use labels for individuals instead of giving them a name. We call them addicts, we call them a POS, we call them numerous things. Because if we call them by their personal name, who knows, they might blow away our perceptions of who they are.

Zoss offered a time of remembrance and a moment of silence, giving the crowd one last chance to shout the name of someone they’ve lost.

“Too many to remember,” one man said.

Zoss turned her attention back to the star-filled banners after the moment of silence.

“Stars represent a promise,” she said. “It symbolizes hope. We want to remember (our lost loved ones) in a positive light, and we want to feel hopeful that we can help end some of these issues.”