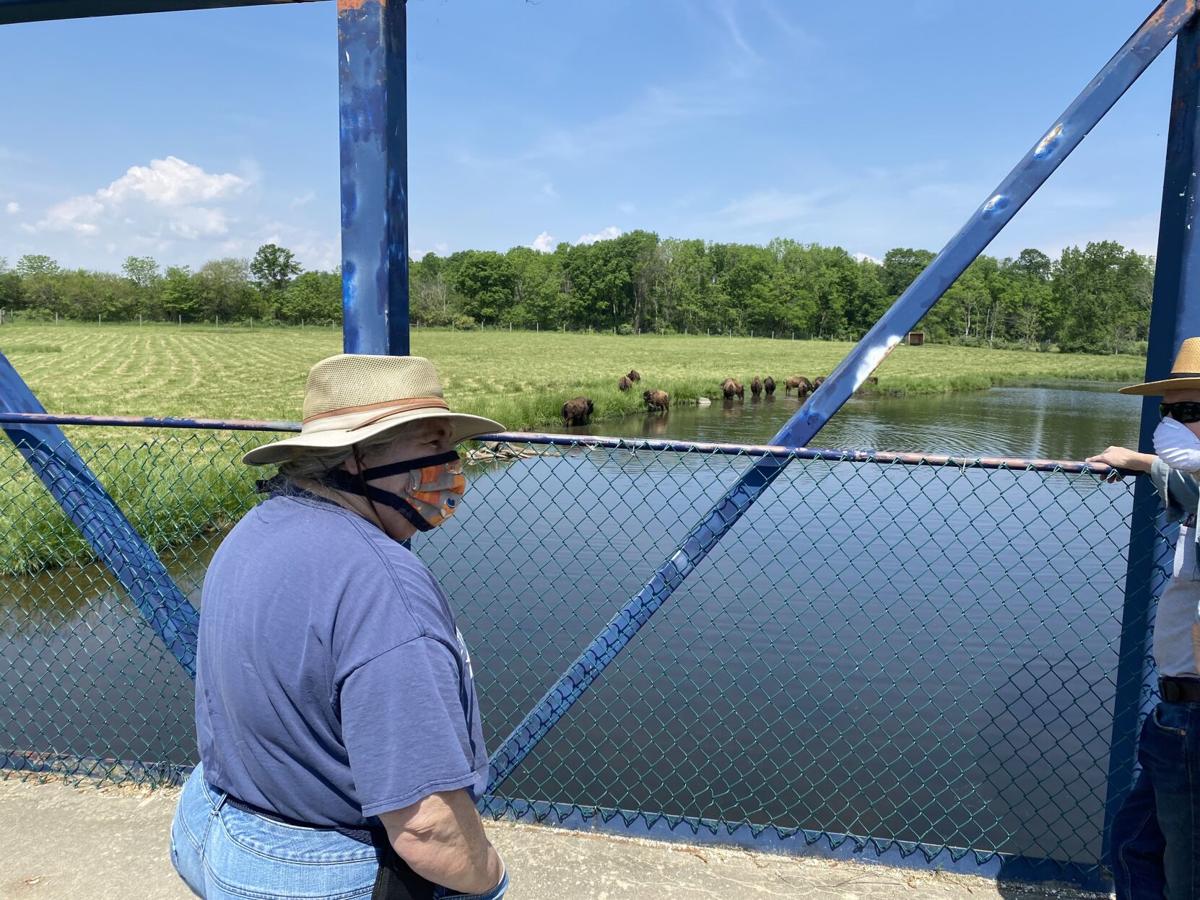 Head animal curator Pat Goodmann tells the history of Wolf Park while looking at a group of bison. 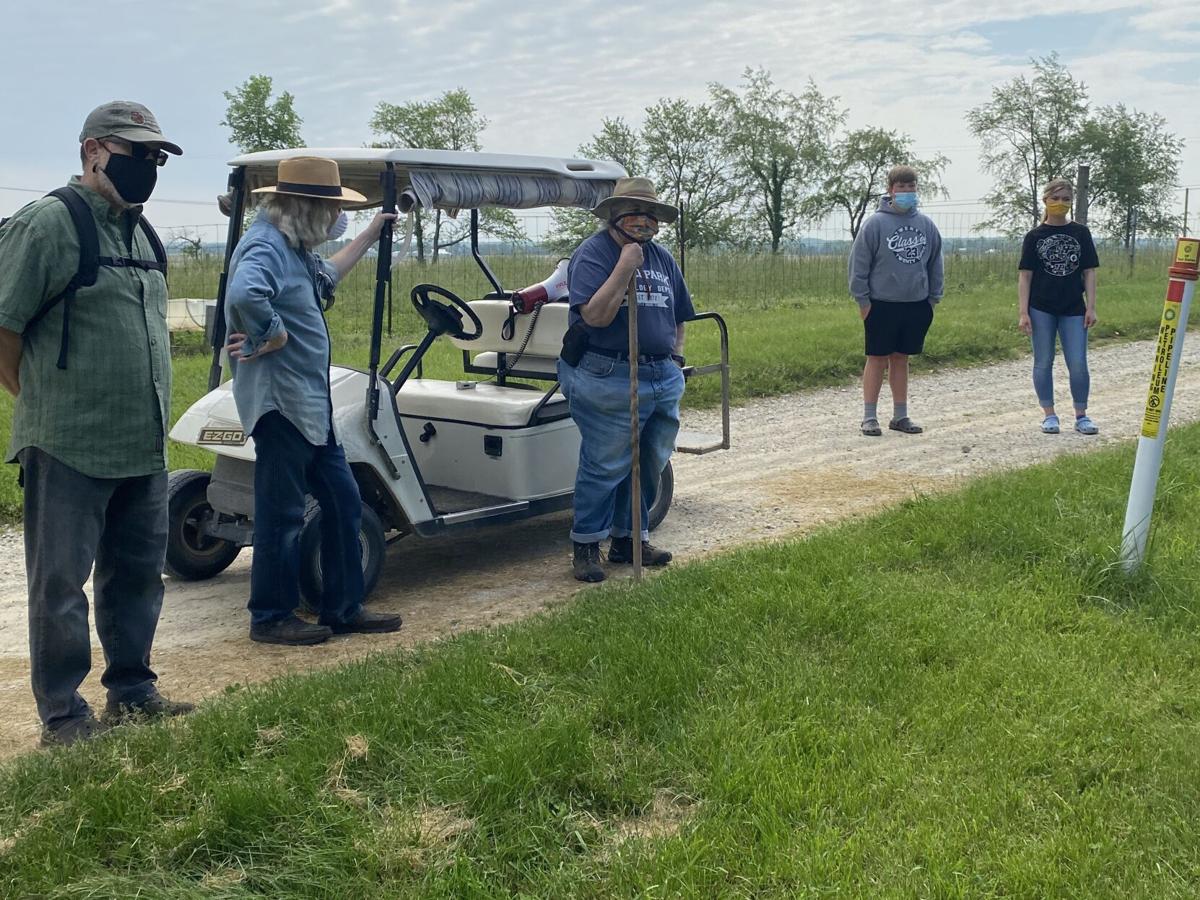 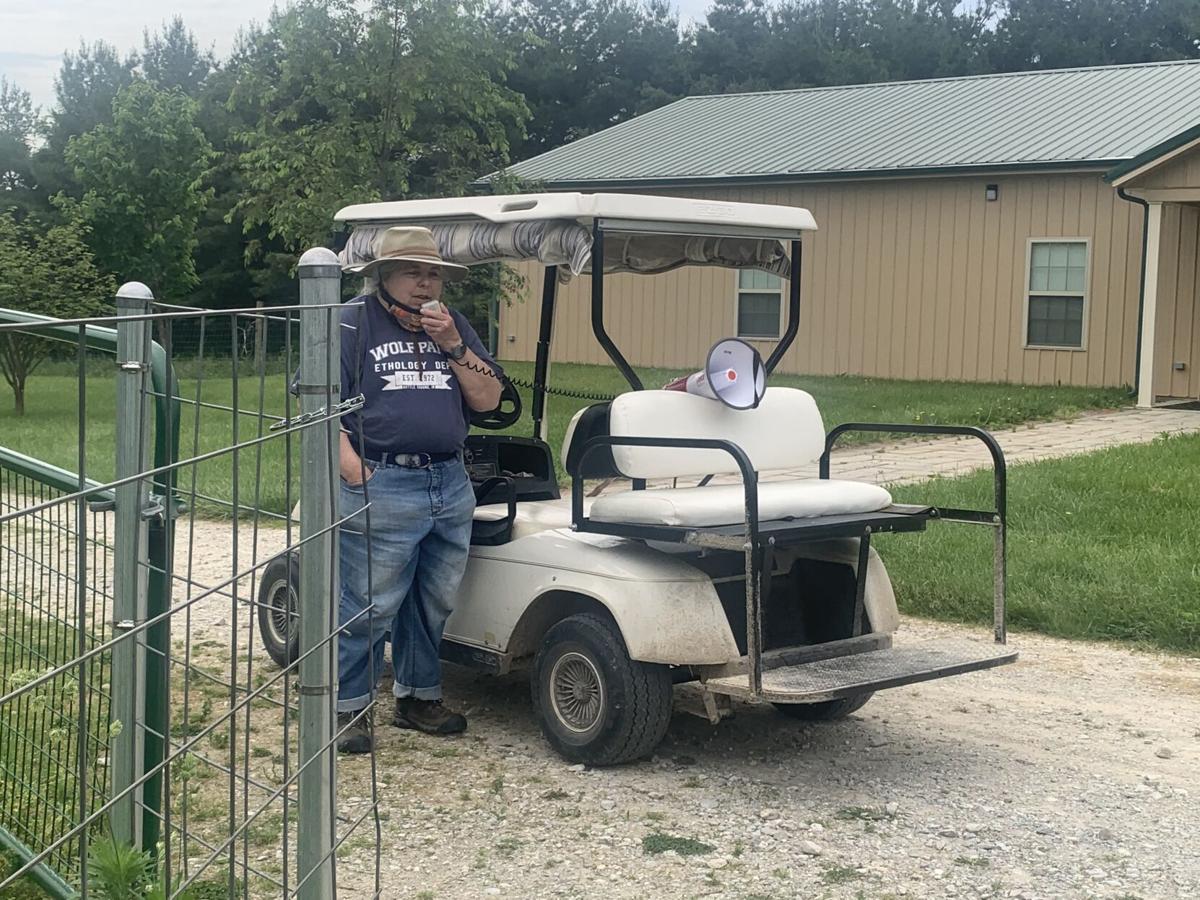 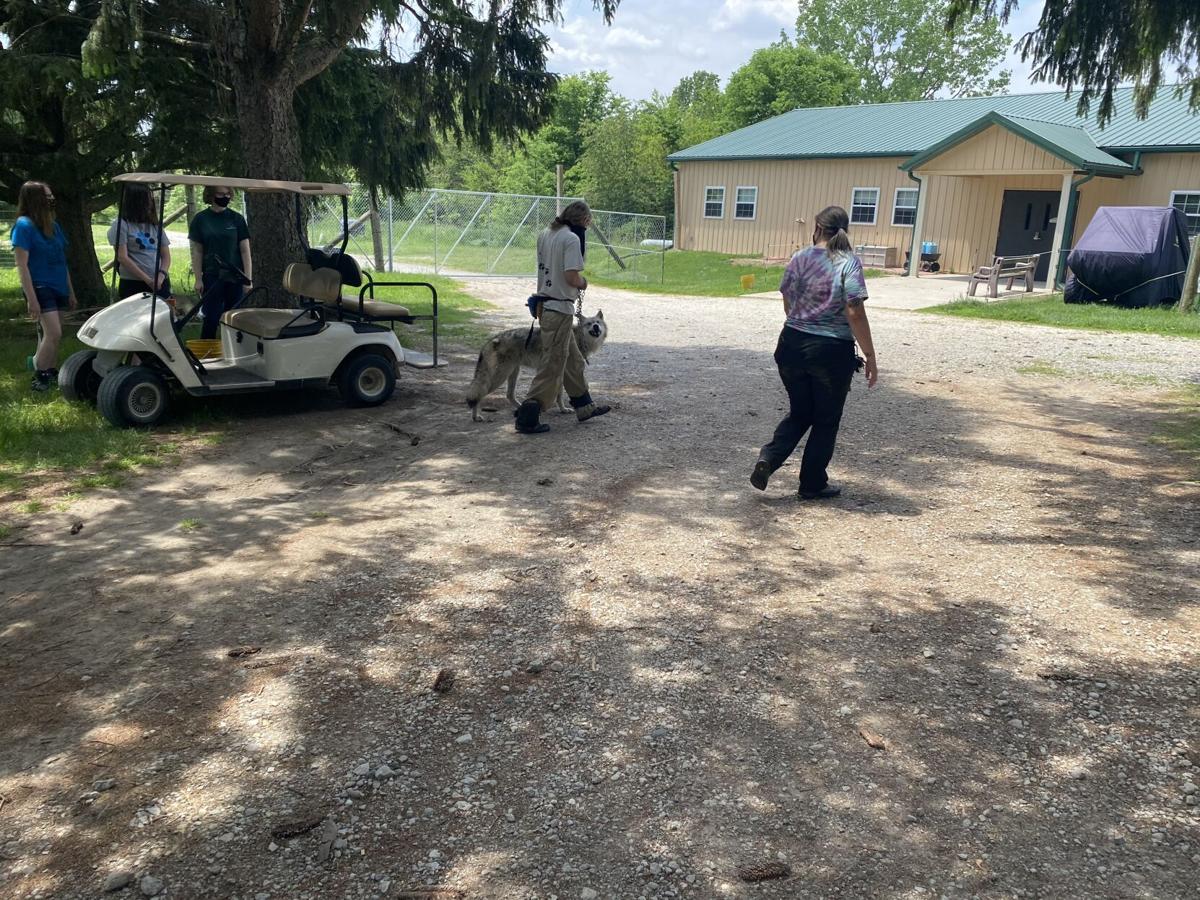 Wolf Park wolf Sparrow walking with a handler to a new enclosure. 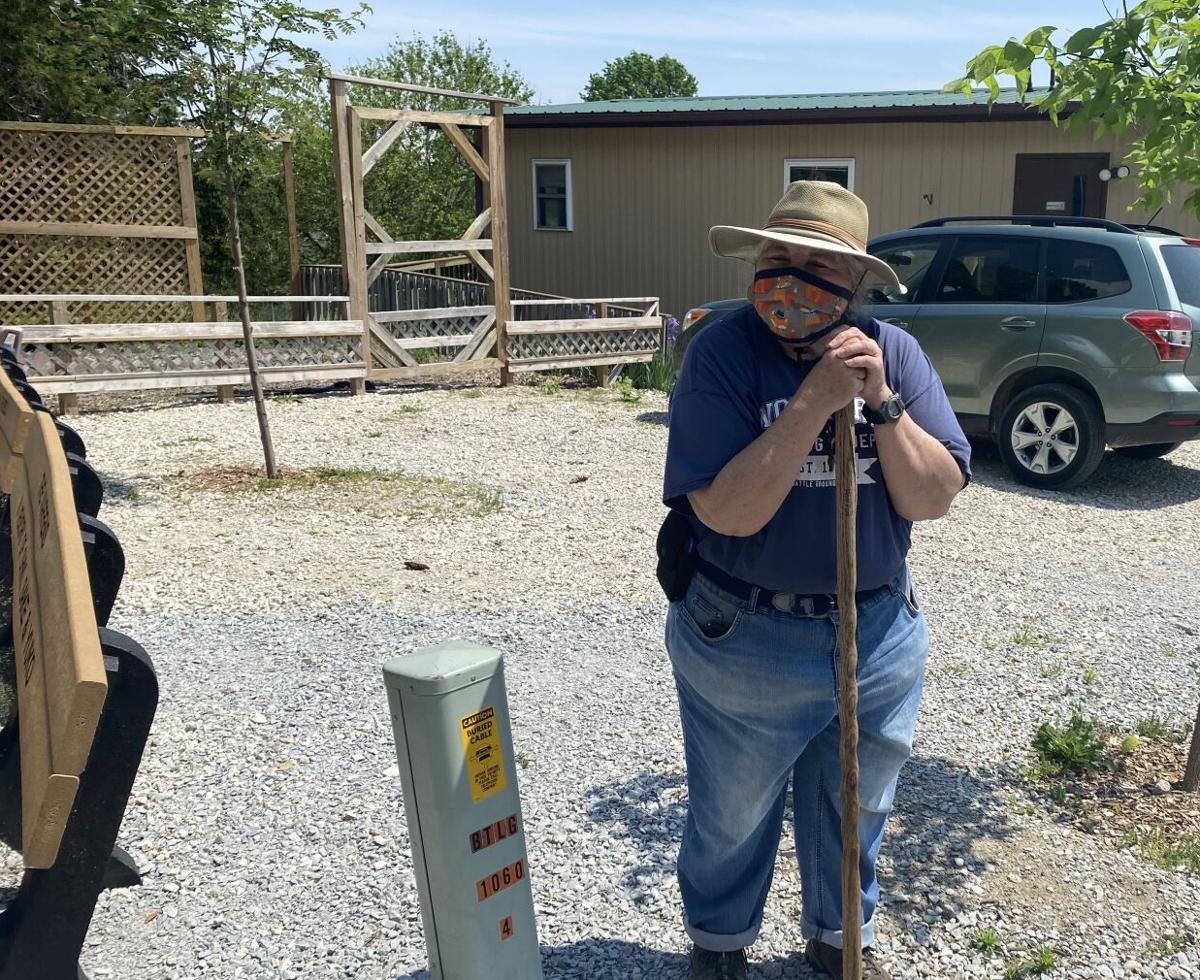 Pat Goodmann rests against her walking stick while answering questions during a historical tour of Wolf Park. 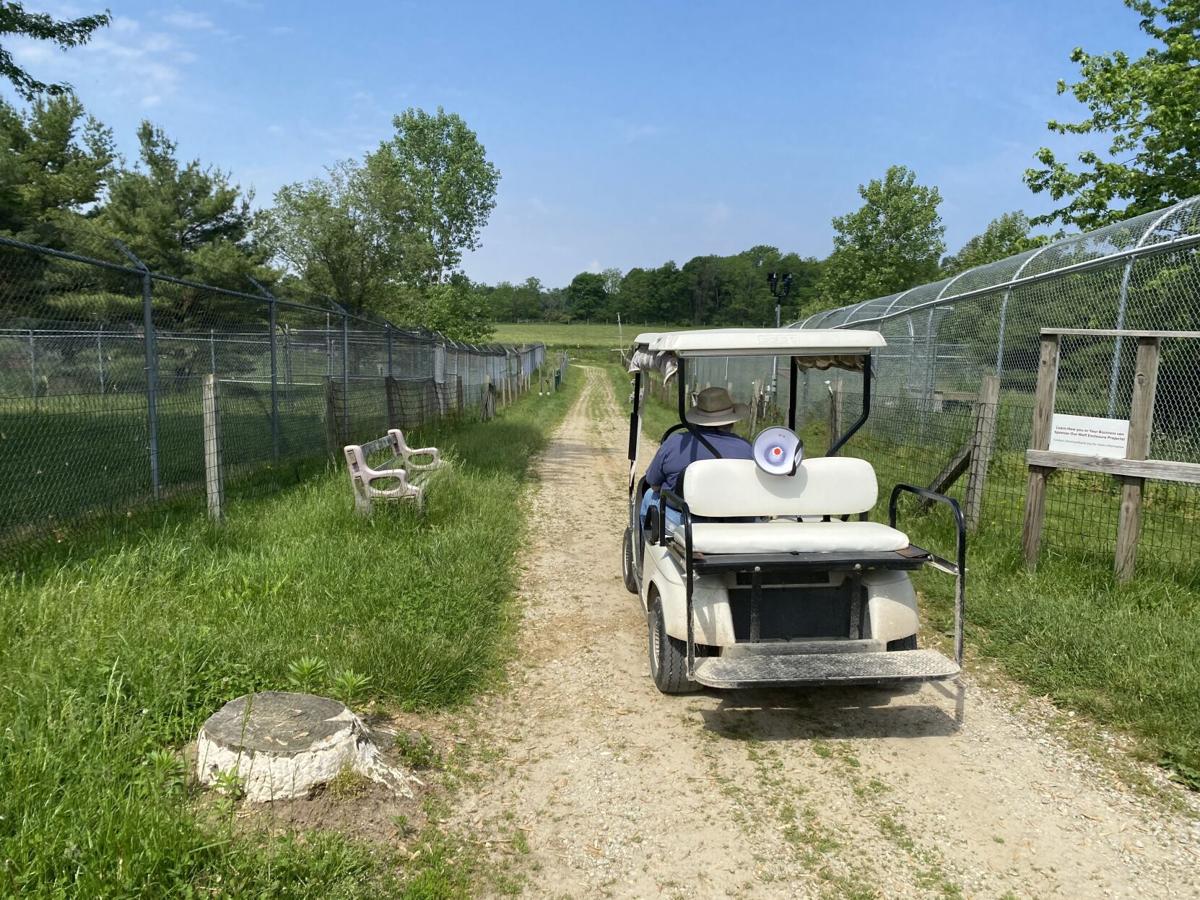 Head animal curator Pat Goodmann tells the history of Wolf Park while looking at a group of bison.

Wolf Park wolf Sparrow walking with a handler to a new enclosure.

Pat Goodmann rests against her walking stick while answering questions during a historical tour of Wolf Park.

Pat Goodmann grew up wanting a pet wolf. After realizing that she probably couldn’t make that happen, she found Wolf Park — and has been there for 47 years with no plans of leaving.

Goodmann, 70, is the head animal curator for Wolf Park, a local not-for-profit organization that does behavioral research, education and conservation mainly revolving around wolves.

After realizing she couldn’t have a pet wolf and allow the wolf to be fully happy, she said she decided the best thing to do would be to get a job in a wildlife park where the keepers are encouraged to build relationships with the animals and work with them through direct contact.

She recalled hanging out around Wolf Park as much as she could in her early years there, working under the founder and former Purdue professor, Erich Klinghammer.

“I got permission to hang around the wolves in my spare time, so I'd sit and watch the wolves,” she said.

Goodmann said she doesn’t have any plans for retirement. But her mobility has become increasingly frustrating, particularly after she took a couple of falls on her knee in the winter.

“I was also just less active and now I'm having trouble getting my mobility back,” she said. “I've been doing more desk work, and my days are a little more predictable than they've ever been. And I don't like it all that much.”

She said she's putting together a “history project,” writing the details of how the park started when she can’t get out to do the physical labor much.

Goodmann said she's reached an age that sometime in the next few years, she may not be able to enter the wolf enclosures anymore.

“I may just have wolves, if they're walking them on a leash I may ask them to let me know I'll come out and sit on a bench and if they want to say hi I'd be delighted,” she said. “I will always watch them as long as I can get out here and see them.”

Though she plans to be around the park and the animals as long as possible, she plans to hand over the reins as head animal curator in the “not-too-distant future.” Her title, she joked, could become “historical artifact.”

“We don't have anyone in line for that position right now, and I want to work with them for at least a year to see how they're doing,” she said, “but at some point I will do that.”

Even though the park was originally founded by Klinghammer, Khaz Brooks, bison curator at the park, said Goodmann is the face of Wolf Park.

“I would even argue that she has surpassed the state of our founder — like when people think of Wolf Park, they don't think of our founder, they think of Pat,” Brooks said. “The community thinks of Pat.”

Brooks, 30, who uses they/them pronouns, was an intern at Wolf Park who later joined as a full-time staff member. They're currently the bison curator and work directly with Goodmann.

Brooks grew up in Atlanta but followed Wolf Park since 11 years old. When they came to the park four years ago, Brooks recalled being excited to get to work alongside someone they looked up to for so long.

“Even if people haven't been to Wolf Park in like 20 years, they'll always be like, ‘Is that lady with the silver hair, is she still working here?’” Brooks said. “We're like, ‘Yeah, that's Pat. She's here.’”

Brooks also described Goodmann as an “encyclopedia of knowledge.”

“Even though I have been here for four years and I work really closely with her, she pulls out a different story almost every day,” Brooks said. “It's like living in history.”

Goodmann’s 90-minute history tour is one of the most popular, Brooks said.

Goodmann was a librarian before Wolf Park was able to pay her salary, Brooks said. Her knowledge of literary works can be seen in the way she talks, if the listener is able to pick up on it.

“She makes literary references all the time and they're often really clever,” Brooks said. “So for most of the public, they kind of go right over the public’s head, but if you like to read, you're a book-savvy person, you catch a reference or two and it's always kind of fun.”

Brooks said a favorite memory is of Goodmann writing limericks for each animal in her spare time. Brooks said the poems were often humorous and not scientific.

“I only remember one was of a wolf we had named Beshow, who was the tallest wolf,” Brooks said, “and it was something along the lines of 'Beshow Beshow, you're very tall. You would excel at basketball.'"

Goodmann’s love of animals was established early in childhood. Some of her earliest experiences with animal care involved much smaller species than wolves.

“A lot of my early pets were insects,” Goodmann said. “I remember being very distressed when the weather would get cold and we'd find torpid or dying crickets in our garden and I kept it. Back then if I wanted to cure something, I wanted to give it a drink of milk. I keep asking my mother for milk to try and revive the crickets.”

Now, her personal pet is a goldendoodle named Pogo, who will be 15 at the end of this month, she said.

Goodmann was the last graduate student to work under Klinghammer, Brooks said, a testament to how long she has been involved.

“I came with the idea that I didn't want to just get a degree and move on,” Goodmann said. “I wanted to stay and help build the park.”

Many early experiences with the park, she said, were trial and error. They did things that they would never do today, like using direct contact with the bison, which Goodmann and Brooks said they are grateful they don’t do anymore for safety reasons.

“Back then there wasn't as much information available and so we were learning as we went and we made mistakes,” Goodmann said.

In her time at the park, she said the changes that have been made have helped a lot with efficiency. One example was the gates that they use now — which have two sets of doors — so if wolves get past one door, they would still have another door keeping them inside the enclosure.

“I remember being highly skilled at 'eeling' out through a single gate with wolves lining up and wanting to go with you — and sometimes holding onto your leg,” she said.

The wolves weren’t holding on to keep her in, though. They just wanted to come with her, Goodmann recalled.

Another change is the park now has paid positions. In the beginning, she said, only research assistants were paid.

One of the most important things she’s learned over her time at the park and from Klinghammer is why it is important to teach the public about animals like wolves, she said.

“Pat’s History Tour” is offered on Mondays at 10:30 a.m. through August. It costs $10 for adults, $8 for children. People can register here.