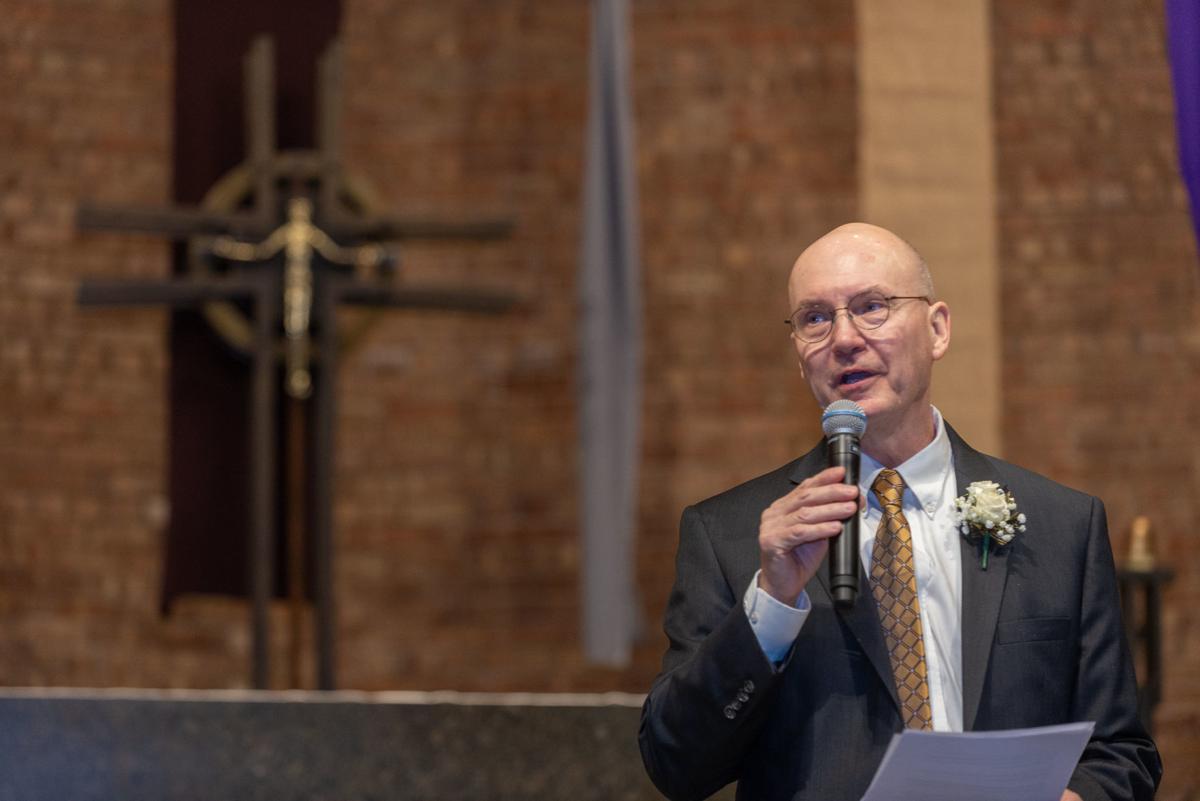 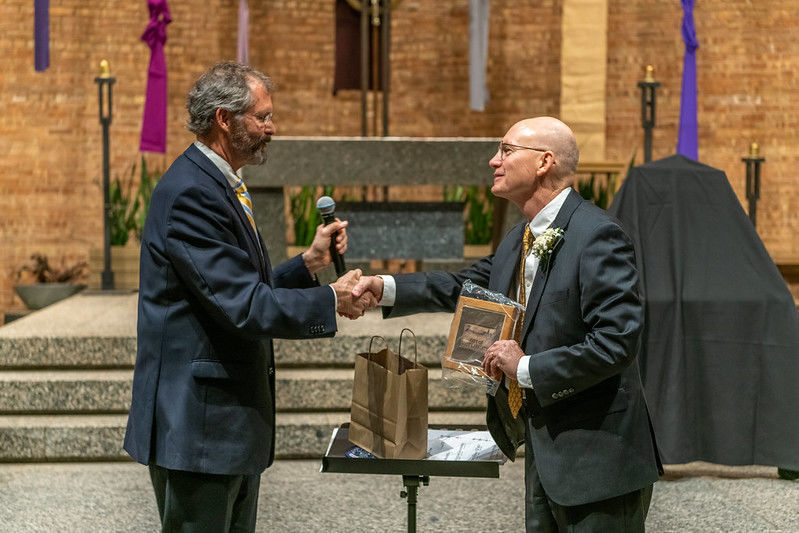 West Lafayette Mayor John Dennis presents Joe Micon with a gift to commemorate his contributions to the city at the LUM Follies celebration earlier this month.

West Lafayette Mayor John Dennis presents Joe Micon with a gift to commemorate his contributions to the city at the LUM Follies celebration earlier this month.

Joe Micon left the lush riverside of Niagara Falls, New York, in 1976 to earn his degree in sociology at Purdue.

But Micon did not exhibit the usual transience of a Purdue student: here for about four years and then gone.

After a brief stint at Indiana University earning his master’s degree in social work, Micon returned and has dedicated four decades to providing a social safety net for low-income families in Greater Lafayette. On Tuesday, he’s retiring at 62 from a 30-year tenure as executive director of Lafayette Urban Ministry, a conglomerate of 47 area churches.

State Reps. Sheila Klinker and Chris Campbell introduced a resolution in the Indiana General Assembly, which passed, to commemorate his retirement. They presented it at the event.

“Mr. Micon has been a tireless advocate for Hoosier children and working families, the homeless, the unemployed, the uninsured, those with addictions, and those with mental health struggles,” the resolution reads. “Mr. Micon has devoted his life to serving the needs of others and building a better and stronger Indiana through which Hoosier families can live happy, productive lives.”

As a community organizer, politician and leader, Micon led a multifaceted approach to social justice and left an indelible mark on Greater Lafayette.

‘A quiet dignity shown during times of struggle’

Before he began to pack them up in preparation for his retirement, Micon kept a shelf in his office decorated with vodka and beer bottles, hypodermic needles and various weapons. The purpose?

“I kept those on the shelf as a reminder to me, my board and the staff about what it is that our homeless guests are really dealing with,” Micon said.

LUM began offering services to Greater Lafayette’s homeless population when its directors found wadded-up blankets under the front porch of the office building, Micon said. Starting with seven beds in an attic, the organization has since built its own shelter to house up to 44 people each night. It also transforms its main lobby into a warming station during the winter months.

Providing assistance to the homeless population can be “tremendously difficult,” Micon said. Many individuals suffer from addiction or mental illness, in his experience, which can exacerbate negative family circumstances or ruin relationships with employers.

“There’s only one person who’s ever going to deal with that addiction,” he added. “And it’s not me, it’s not our staff, it’s not volunteers — it’s that individual. And so we want to, in respectful and supportive ways, make sure that we’re at least talking about it.”

Through the years, Micon said he’s been inspired by the resolve of individuals who have experienced recurring failure but continued to take steps to better their lives. It’s this conviction he’s attempted to convey to LUM’s nearly 4,000 donors, who the organization relies on to fund its assistance programs.

His two children, Katie and Jonathan, know no reality other than their father’s community organizing and assisting those in need. Growing up, volunteering was an expectation similar to how most children view chores. Katie said LUM’s schedule, particularly its Thanksgiving meal that feeds more than 900 people annually, became her family’s.

Katie, 29, said it didn’t occur to her until adulthood that the positive nature and altruism she grew up around were atypical. Normal, to her, was her father facing down the crises of underprivileged populations by day and maintaining a positive demeanor at home by night.

“Dealing with that and being surrounded by clients who have to deal with that, it does wear on you,” she said. “My dad just had this unique outlook and optimism that kept him positive throughout all that, and that’s a very hard thing to sustain.”

Her life was such that when her mother ran late picking her up from the Lafayette YMCA, she remembers walking to the homeless shelter because it felt safe and she knew many guests. Micon’s objective to humanize the homeless, he said, taught him about faith’s mandate that people love one another.

“I think that my faith has been immeasurably strengthened because of the lessons that I’ve learned from the children and families that we work with here at LUM,” he said. “A quiet dignity shown during times of struggle. A continuation of showing kindness and respect to others when things in the world aren’t going right for them.

“So often the people we serve here at LUM are the ones who are imparting grace, not those of us who are privileged to be here to provide the nuts and bolts of food and shelter.”

Feeding children or helping immigrants — through LUM’s Immigration Clinic — along the notoriously convoluted path to U.S. citizenship are not political issues to Micon. They are rooted in theology and morals.

“There’s probably not a Republican or Democratic way of thinking about feeding children. You just feed children,” he said, addressing how his progressive ideals compare to the tendency toward conservatism shown by most religious groups. “I would caution folks not to see our work in the immigration area as political or partisan. I would suggest they look at the theology that comes from. We’re called upon to welcome the stranger and give counsel.”

Micon was a Warren County councilor for four years before winning a seat to represent West Lafayette in the Indiana House of Representatives from 2004 to 2008. He was the first social worker elected to the Indiana General Assembly, he said.

He said he always made sure to introduce the maximum number of bills allotted: five during short sessions and 10 in extended sessions. He took part in efforts that reshaped the tax code to benefit working families, increased the minimum wage and implemented full-day kindergarten.

“I couldn’t understand for the life of me why my legislative colleagues wouldn’t take their full contingent of bills,” Micon said, sporting a bemused grin. “Why are you here if you’re only going to introduce one or two? You have 10!”

Micon’s son, Jonathan, 25, remembers his father making the hour commute to and from Indianapolis to spend evenings at home during legislative sessions. Not even a perilous winter storm that coated roads with ice could prevent Micon from making the trek, his son said.

Observing his father as a politician demonstrated the power of forging connections with people, Jonathan said.

“I think my dad was good at showing people he was willing to work for them,” Jonathan said. “I think everybody likes to say that it’s important to help and it’s important to give back, but to actually see my dad do that in practice had a huge effect on me.”

Micon’s work in the state legislature was a continuation of the initiatives LUM advocated for. The organization’s prime accomplishments include diverting state money to buy textbooks for low-income students and commissioning a study that resulted in the provision of free breakfast at every Indiana public school.

A keen focus on working to benefit children defined many of Micon’s efforts. He called the four-day LUM camp, geared toward creating opportunities for low-income children, “the most important thing we do to change the world for the better.” It’s his belief that creating strong children helps to prevent “broken adults.”

“If you’re going to work with a population that is struggling economically, you always want to start with the young people,” Micon said. “See if you can help them to grow and get put on the right path so that later in life, they’re not falling into ways that are difficult to recover from.”

Micon is soft-spoken yet commanding. He’s purposeful, lacing his sentences with pauses to find the precise words to articulate his thoughts. His gaze wanders to his office wall when he’s concentrating, circular glasses framing his sharp, thoughtful eyes. His cadence mimics a pastor’s.

“If I had not been Roman Catholic, I’d probably be ordained today,” he said. “But I think that where I ended up going instead was following the call to service of families and children.”

In his final weeks before retirement, Micon was still wondering how LUM could evolve to grow its volunteer and donor base by adapting to the digital age. He’s with the times, aware of the inspirational ability of a minute-long video and the widespread popularity of memes.

“We need to be touched emotionally, we need to be inspired,” he said. “I’m not anywhere near vain enough to think that this place isn’t going to change and grow after I leave. I certainly hope it will.”

It becomes impossible to separate Micon’s organizational accomplishments from the person he is. Both children said he’s likely to be bored now, stripped of his moral obligation to wake up every day and work on behalf of other people.

Once he officially leaves his post, he plans to consult with the new executive director, Wesley Tillett, and impart the importance of creating personal connections with donors.

“People want to know that their dollars are going to a place that has an impact,” he said. “They want them to be used wisely. But I think I have always moved forward with an understanding that donors don’t just give to good causes. They give to people who have good causes.”

Micon’s legacy is the 40 years of contributions he made to a community he came to as a college student.

“It’s been quite a ride,” he said, shaking his head wistfully and staring into his lap.