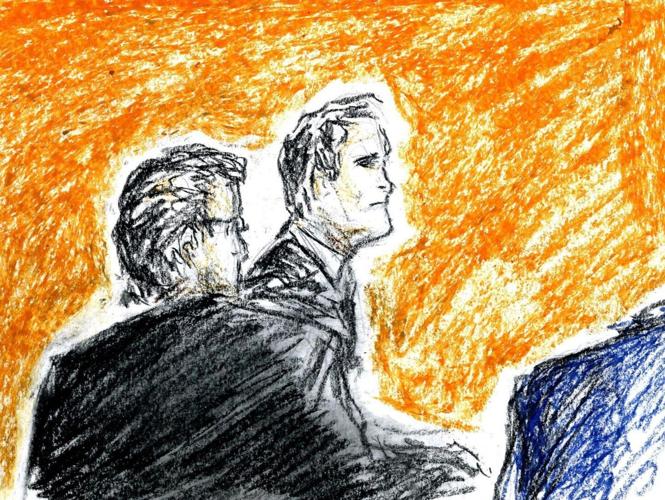 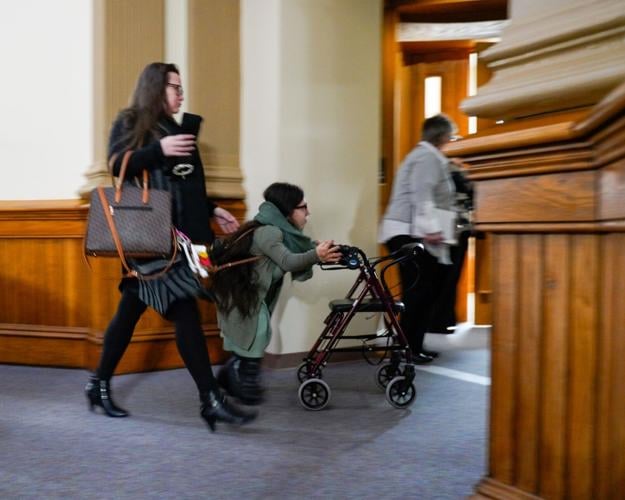 Natalia Barnett arrives to testify during the trial of her adoptive father, Michael Barnett, at the Tippecanoe County Courthouse on Wednesday morning.

Natalia Barnett arrives to testify during the trial of her adoptive father, Michael Barnett, at the Tippecanoe County Courthouse on Wednesday morning.

Natalia Barnett squirmed in her seat on the witness stand, complaining of back pain.

She winced in pain as the judge and both legal teams left the rooom for a sidebar.

Most of the prosecution’s case hinged on proving the extent of Natalia’s disability.

Superior Court Judge Steven Meyers decided with both legal teams that the definition of “disabled” will be left up to the jury’s interpretation.

“Disabled” is defined differently by multiple statutes at both the federal and state level, he said, each written for different purposes. But because the term isn’t defined in criminal code, Meyers said he isn’t comfortable imposing a set definition.

What is Natalia’s condition?

She has dysplasia, or dwarfism.

Witnesses throughout the trial have either said she has diastrophic dysplasia, which is what Natalia said she has, or spondyloepiphyseal dysplasia.

Both forms affect cartilage formation and can lead to malformed bones in the neck, spine, ankles, pelvis, knees, arms and hands. Spondyloepiphyseal dysplasia, also causes vision and hearing problems in some people.

Deputy prosecutor Jackie Starbuck clicked through pictures on a TV screen of X-rays of different body parts of a person with diastrophic dysplasia. On top of the dwarfism from the condition — Barnett is 4-feet-1-inch — she has contractures throughout her body, she said.

A contracture is a permanent tightening of skin, muscle or tendons that restricts joint movement, Dr. Brad Tinkle said.

Tinkle, a Purdue alumnus and a clinical geneticist that has run numerous dysplasia clinics around the Midwest, testified as an expert in dysplasia, specifically diastrophic dysplasia.

The malformed bone structure affected Natalia’s ability to grip things because she could only use certain fingers, Tinkle said. She walked on her tiptoes because of contractures in her ankle, and she overcompensated on one side while walking because of malformations in her pelvis.

She came into the courtroom Wednesday hunched and leaning on her walker, wearing special shoes that helped her not walk “on her tippy toes.”

The first witness of the trial was Dr. Joseph Bellflower, the orthopedic surgeon who performed one of Natalia’s two clubfoot surgeries. Clubfoot is a genetic defect in the feet that happens when the joints in the feet dislocate from those in the ankle.

Bellflower said it makes the patient’s feet turn down and inward, somewhat like a golf club.

The apartment Natalia lived in didn’t have any accommodations for a little person, Starbuck said, and it took the apartment complex some time to install a lower handle and lock for her front door.

Indiana State Police Det. Brandon Davenport confirmed Tuesday that he took a video in 2019 of the Lafayette apartment. The video showed that to get to the apartment, there is a set of five steps from the street to the yard, a set of six steps from the yard to the door on the side of the house and a 12-step staircase to the second-floor apartment in the converted house.

The malformations in her pelvis, legs and ankles would have made it hard for Natalia to get up and down the 23 steps to her apartment, Tinkle said.

Kinnard said Natalia lived in the apartment in 2013, and the videos and photos Davenport provided were taken six years afterward.

Photos from the apartment showed the bathroom had a clawfoot tub, and the kitchen had an electric stove top with controls near the back, a fridge and a top-loading washer.

Tinkle said Natalia would have had “great difficulty” lifting her legs to get in and out of the tub.

The tub isn’t the only appliance Natalia might have had issues with, Tinkle said. The same is true of the stove top, which he said would have been “next to impossible” for Natalia to use.

“Even with a stool, she would have been leaning on top of the burners to handle the controls,” he said.

Kinnard asked Tinkle if he knew from the medical documents whether Natalia even used the stove to make meals, and Tinkle said she told doctors that she normally made microwave meals.

Natalia would have had to use a grabber to extend her reach and grip objects for the washer and most other things in the kitchen, he said, but even grabbers require grip strength and shoulder mobility. She didn’t have much of either of those, he said. A coffee mug, for instance, would have “substantial” weight and be difficult to manage with a grabber.

Lindsay Yenna, former vice president of operations for the company that manages the property, said she didn’t remember whether the appliances in the photos were the exact ones in the unit while Natalia was there, but those are the type of appliances the management company provides.

Before the Barnetts rented the Lafayette apartment for Natalia, they rented her one in Westfield, Indiana, for much of 2012.

Natalia struggled to take clothes out of the washing machines, which were top-loading in both the Lafayette and Westfield apartments, because they both had knobs at the back rather than the front and it was extremely difficult for Natalia to reach the clothes at the bottom of the machine.

Natalia added that she didn’t know how to work either appliance, anyway.

Some of her former neighbors testified Tuesday they could smell her from 10 feet away, and one even washed her clothes once.

The defense argued multiple times during cross examination that Natalia was old enough to do these things.

But the Barnetts never taught her how to do these, Natalia said Wednesday. Up until she was left in Westfield, Kristine still cut her hair.

In the time she lived in the Westfield apartment, which was less than a year, Natalia requested a deadbolt on the door to get inside and that the latch on the storm door be installed low enough so she could reach it. Yenna said both were done.

While Natalia asked for those accommodations eventually, neither she nor Kristine said anything about accommodations the day they signed the lease and got the keys to the apartment.

A picture from the front of the house showed a bus in the background.

“It’s within the block,” Yenna told Riley Pelton, another one of Michael’s attorneys, about the bus stop. “Easily within walking distance.”

That bus stop kept coming up throughout Tuesday morning’s testimony.

A typical goal for dysplasia patients in physical and occupational therapy is to be able to walk 100 to 200 feet without stopping, Tinkle said, but Natalia’s documents show she struggled walking just 10 to 20 feet. She would have needed “several stints” to get to the bus stop or some assistance walking there, he said.

The defense on her disability

Kinnard said Natalia participates in activities like swimming and dancing.

The defense showed four videos and some photos from social media accounts on Wednesday showing Natalia in various activities. One of the photos showed Natalia doing a handstand; Natalia responded saying it only lasted a few seconds, and she doesn’t do it very often.

Another video showed Natalia inside a swimming pool, holding on to the edge and bobbing up and down.

Natalia said she loves being in the water, but she didn’t know how to swim and she was still touching the ground in that video.

Kinnard also repeatedly asked Natalia whether her diastrophic dysplasia, foot problems and scoliosis “were the fault of Michael and Kristine Barnett.”

When Kinnard asked her if it was her parents’ fault that her pain worsened between 2012 and now, though, she had a different response.

Natalia said if she had surgeries on her knee during the time she spent without the Barnetts’ financial support, she would have avoided the increase in pain. After Starbuck objected to the question before Natalia finished answering, the attorneys met in a sidebar discussion out of the jury’s hearing.

The question was withdrawn after the sidebar.

But Natalia’s struggles were not the fault of Michael, Kinnard argued. Everybody faces some challenges in life. It’s difficult for Kinnard to play basketball, he used as an example, because he isn’t very tall.

Tinkle argued that the analogy didn’t fit because playing basketball isn’t a necessary, day-to-day activity, and it isn’t painful for Kinnard to play basketball even when he does. For Natalia however, daily activities like walking and picking things up are challenging and painful.

Tinkle still agreed when Kinnard asked whether Natalia will have difficulty anywhere, not just the apartment, and her life will be difficult “because that’s the hand she was dealt.”

The Natalia Barnett story: Adopted father acquitted of neglect of a dependent charges