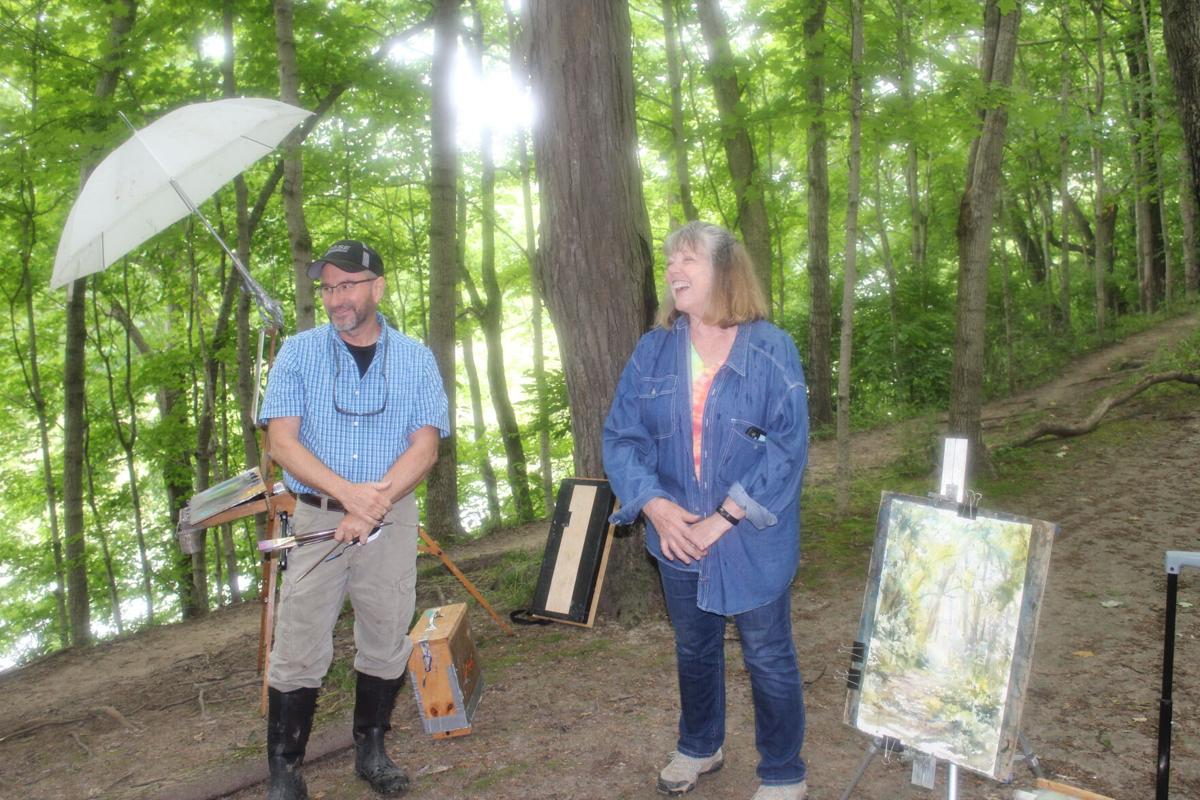 Rena Brouwer and Kurt Stanfield laugh as they discuss art with a group of Tippecanoe residents on the amphitheater trails. 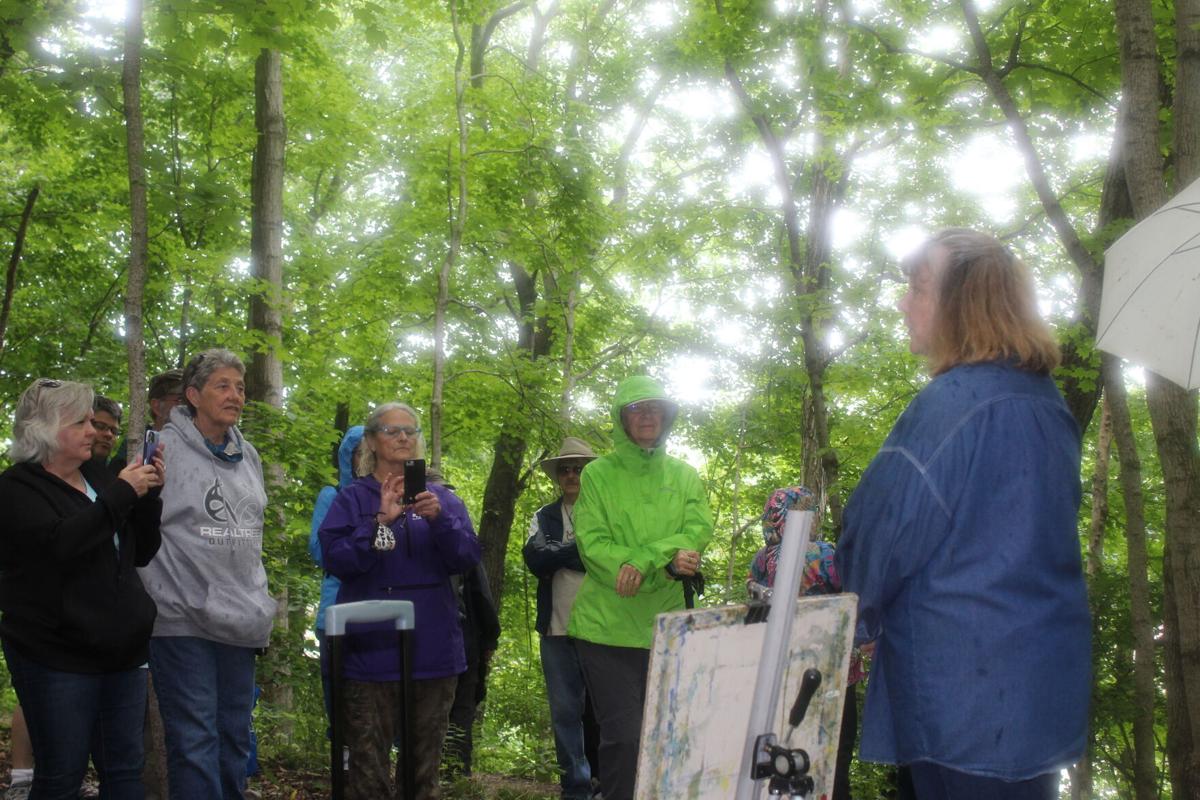 Plein air artist Rena Brouwer talks to a group of people about her watercolor art. 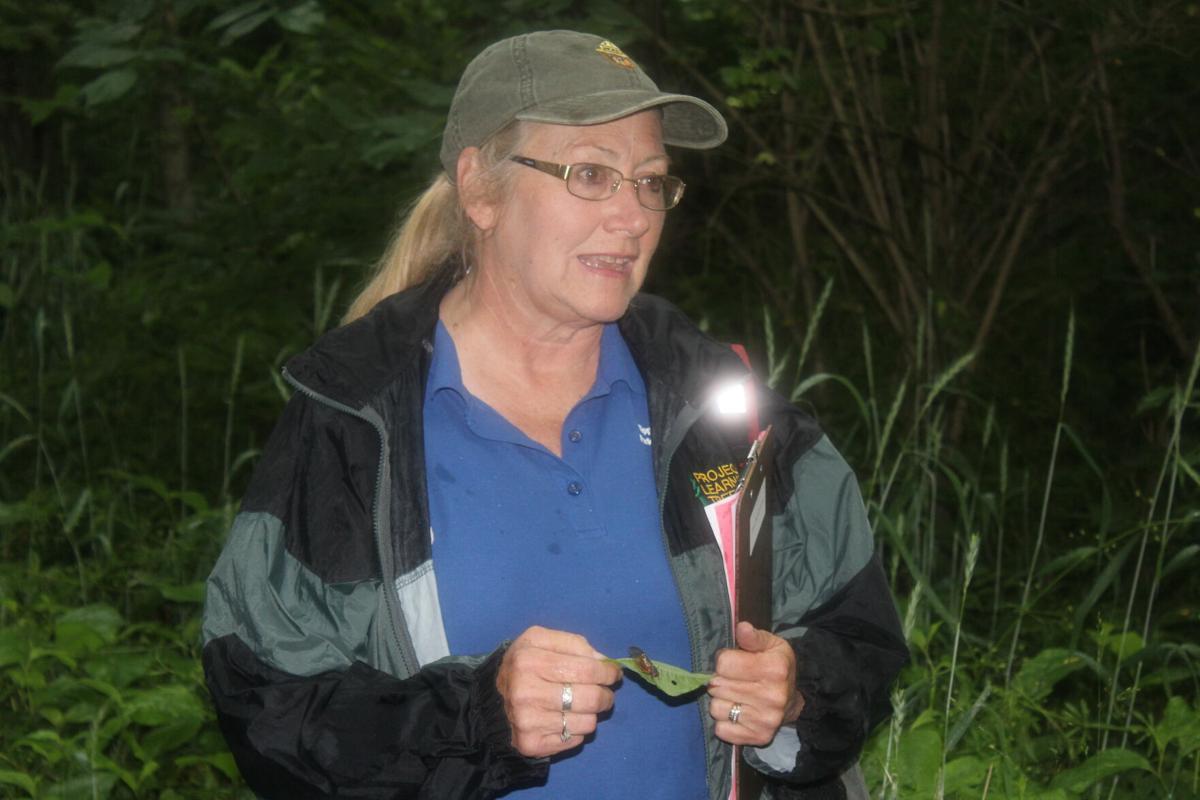 Tippecanoe naturalist Mary Cutler holds a cicada on a leaf as she identifies the different types of plants surrounding her.

Raindrops splatter into the canopy of trees overhead, occasionally making their way through the leaves. Every few minutes, a drop plops gently onto an already waterlogged canvas full of color.

Rena Brouwer's brush strokes though the rain droplets, creating a colorful image of the landscape in front of her.

Plein air painting is the act of painting outdoors.

"There's something about painting outside," Stanfield said as the group formed a semi-circle around him and Brouwer. "It forces you to paint fast, because things are always changing.

"It's overwhelming at first. To a new painter, there's so much visual information."

Brouwer, whose watercolor pieces hang in the Opera House Gallery of Contemporary Art in Delphi, Indiana, said color can be used for more than just visual stimulus. She explained that color often can be used to represent movement, sound or, in some cases, smell.

"I threw pink in there because that reminds me of smell," she said, referring to her latest piece.

While the forest would seem mainly brown and green to most, Stanfield emphasized that nature contains more colors than the untrained eye can see. His oil painting of the amphitheater landscape contained purple and yellow in addition to the more traditional "forest" colors.

"We have these preconceived notions (of what color things are), but if you actually go out and look, it's not that color," he said.

The visit with Brouwer and Stanfield was part of Tippecanoe County's Wednesdays in the Wild, a weekly nature exploration program run by Tippecanoe naturalist Mary Cutler.

Cutler led the group through the woods as they examined different types of plants and flowers along the trails. Members of the group readily pointed out plants such as honeysuckle (which is a harmful invasive species), black locust trees, fire pinks, white pine and skunk cabbage. When torn, skunk cabbage emits an odor similar to that of a skunk, but the smell isn't nearly as strong or long-lasting.

Cutler gave a brief history of the amphitheater and the surrounding trails as she led the expedition through the woods. The idea for the amphitheater, she said, was conceived in 1980 when two professors wanted to put on a performance depicting the Battle of Tippecanoe, a battle between U.S. forces and the Shawnee tribe led by Chief Tecumseh. The amphitheater was finally completed in 1989.

The show went on for only two years before it was deemed "not financially feasible," Cutler said, and it was canceled.

Only 15 minutes into the hike, Cutler and the group found a single Brood X cicada perched on a leaf. Cutler picked the leaf from its plant and carried it around the group, allowing each person a look up close.

It was the first cicada any of them had seen this year.

Wednesdays in the Wild

Tippecanoe naturalist Mary Cutler leads a group of 20 community members through the trails of the Tippecanoe Amphitheater. Along the way, they…