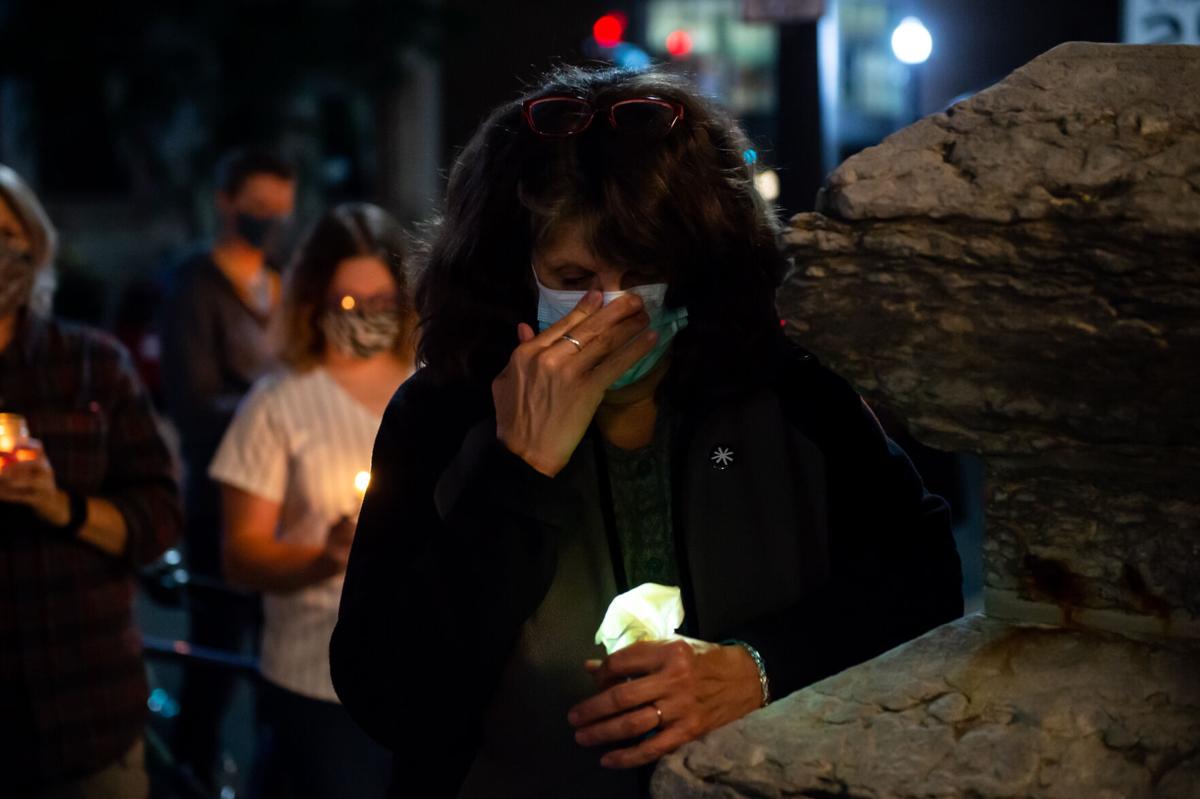 "She gave everyone the right to dignity no matter ... their sex," Titolo said. "Sex is not an issue, that everyone is equal in the eyes of the law. And that's huge if you're a second-class citizen, if you're disenfranchised. That's huge." 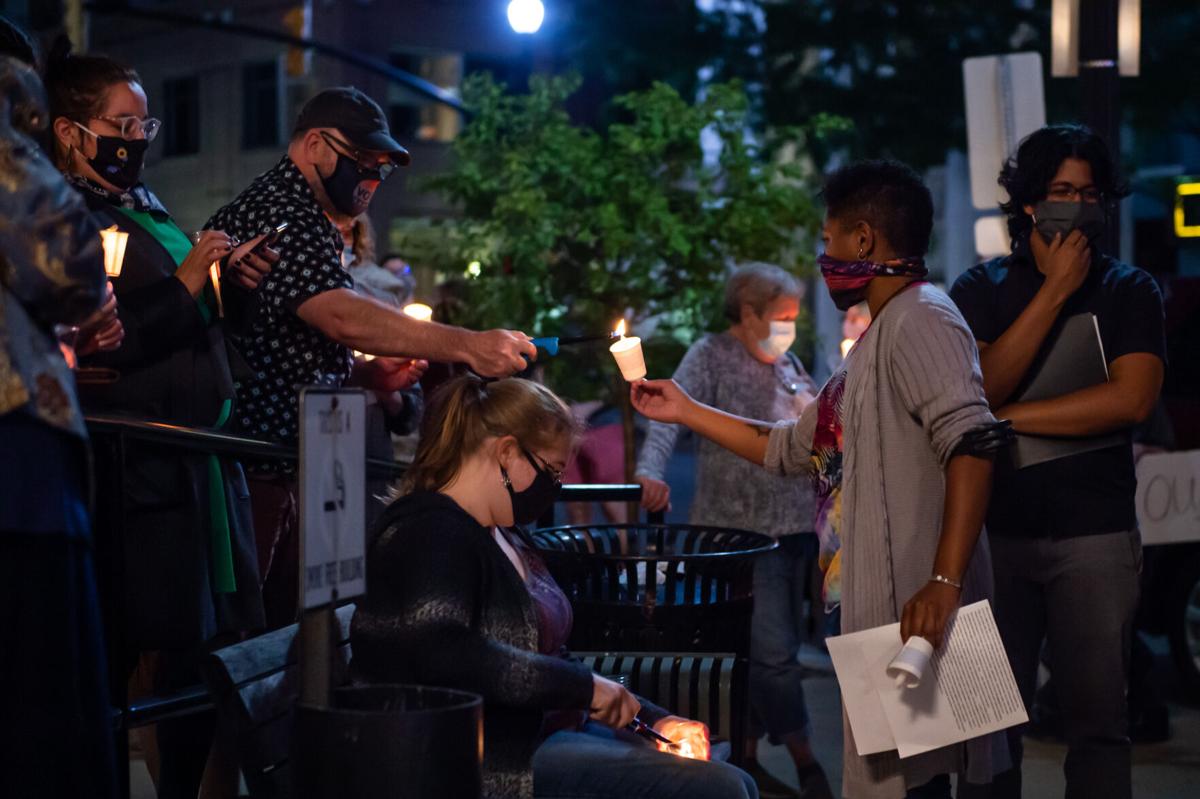 The group of mourners crosses the John T. Myers Pedestrian Bridge as they march toward the Tippecanoe County Courthouse. 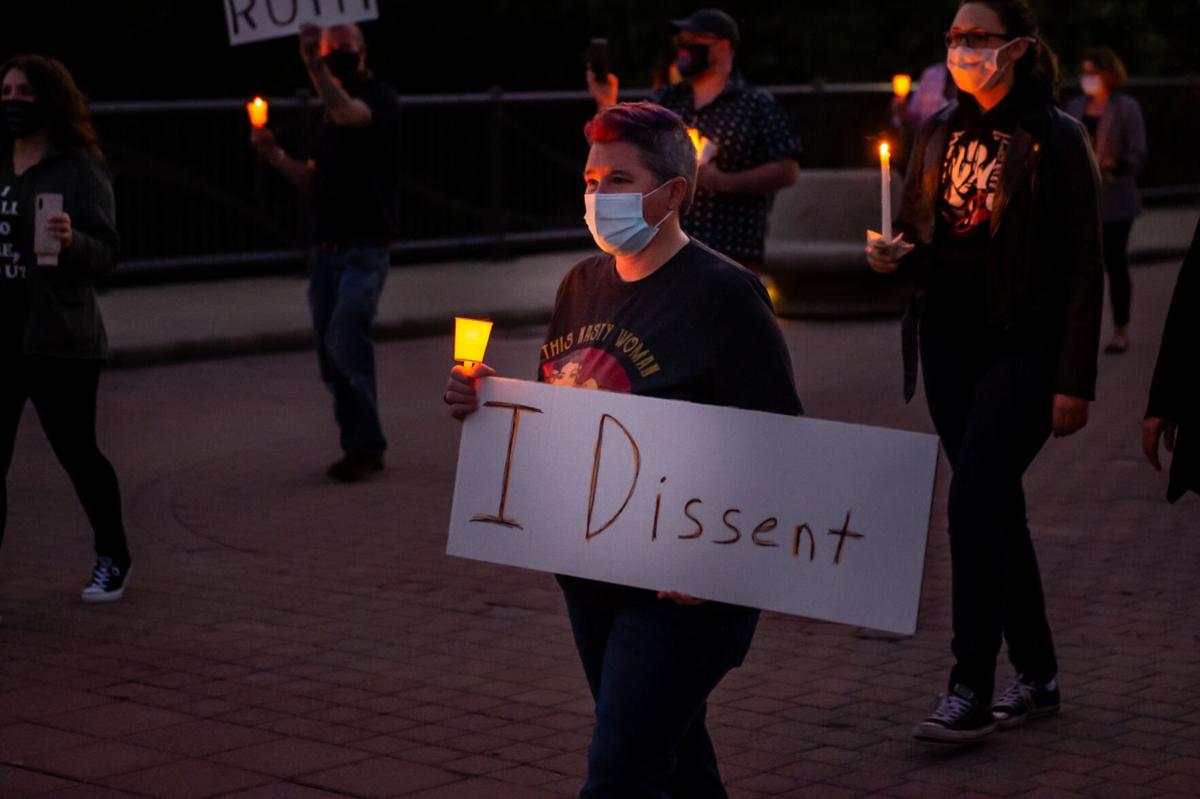 "Her legacy means I can get married if I want to," said Laura Jolley, who is gay. "It means hopefully I can get equal pay, it means I can buy a house on my own without having a man sign for it."

Candles blazed as the sun set Sunday night, lighting faces in a crowd of nearly 100 who gathered for a vigil honoring the legacy of Ruth Bader Ginsburg, the iconic U.S. Supreme Court Justice whose death Friday shook the nation.

Rabbi Michael Harvey of Temple Israel stood on the steps of the Tippecanoe County Courthouse to eulogize Ginsburg, who was born in Brooklyn, New York, in 1933 to Jewish parents in the shadow of the Holocaust. Dubbed the “mensch on the bench,” meaning a person of integrity and honor in Judaism, Ginsburg was the first Jewish woman to sit on the Supreme Court.

“A few nights ago on the eve of Rosh Hashanah, the beginning of the Jewish New Year, as the sun was setting, the entire Jewish world felt a punch in the gut,” Harvey said to a still crowd of onlookers. “On an evening that was supposed to be about rebirth, about beginning again, we saw the alerts on our phones that Ruth Bader Ginsburg ... left this world.”

Ginsburg died at 87 after nearly three decades of service on the court, during which she battled recurring bouts of cancer. The Supreme Court said in a statement Friday she died of complications of metastatic pancreatic cancer.

Speakers and attendees to Sunday night’s event lauded the late justice for her bold progressivism. Many brought signs to celebrate and candles to mourn. Flames dotted the night sky as the group moved across the pedestrian bridge from its starting point, Sonya Margerum Fountain in West Lafayette, to the steps of the courthouse.

Claire Tchoula of Lafayette organized the event to commemorate a “hero,” she said, and to cut through the palpable sorrow she and others felt after the news of Ginsburg’s death.

“When I think about Justice Ginsburg, I think about the pressures that she had to endure, going through college and being the only woman in a lot of her classes,” she said. “And still being very outspoken, still fighting for the things that she believed in.

“She’s just created great examples of tenacity in her life, and that’s the type of life I want to lead.”

Ginsburg became the second woman to be appointed when President Bill Clinton chose her in 1993.

Harvey cited cases in which Ginsburg fought valiantly for LGBTQ and women’s rights as both a lawyer and a judge. She upheld crucial sections of the Americans with Disabilities Act in 1999. A member of Greater Lafayette’s NAACP spoke of Ginsburg’s commitment to racial justice.

Ginsburg also made it a priority to advocate for fellow Jews, Harvey said, by initiating the pause of Supreme Court hearings on Yom Kippur, the Day of Atonement and the holiest day of the year in Judaism.

She issued unequivocal dissents when she disagreed with her colleagues on the court, using them to set a foundation for progress on issues moving forward.

“She didn’t deny another judge’s opinion outright for partisan reasons,” Harvey said. “Instead she intellectually challenged herself and her colleagues, focusing on the differences as a way that she could learn and grow.”

The rabbi led a mourning song in Hebrew, his chants ringing as his microphone echoed. The chant would play at Ginsburg’s funeral, he said.

Harvey challenged the crowd to repeat his final words, delivered in Hebrew. Attendees echoed him, then he translated: “May her memory be for a revolution.”