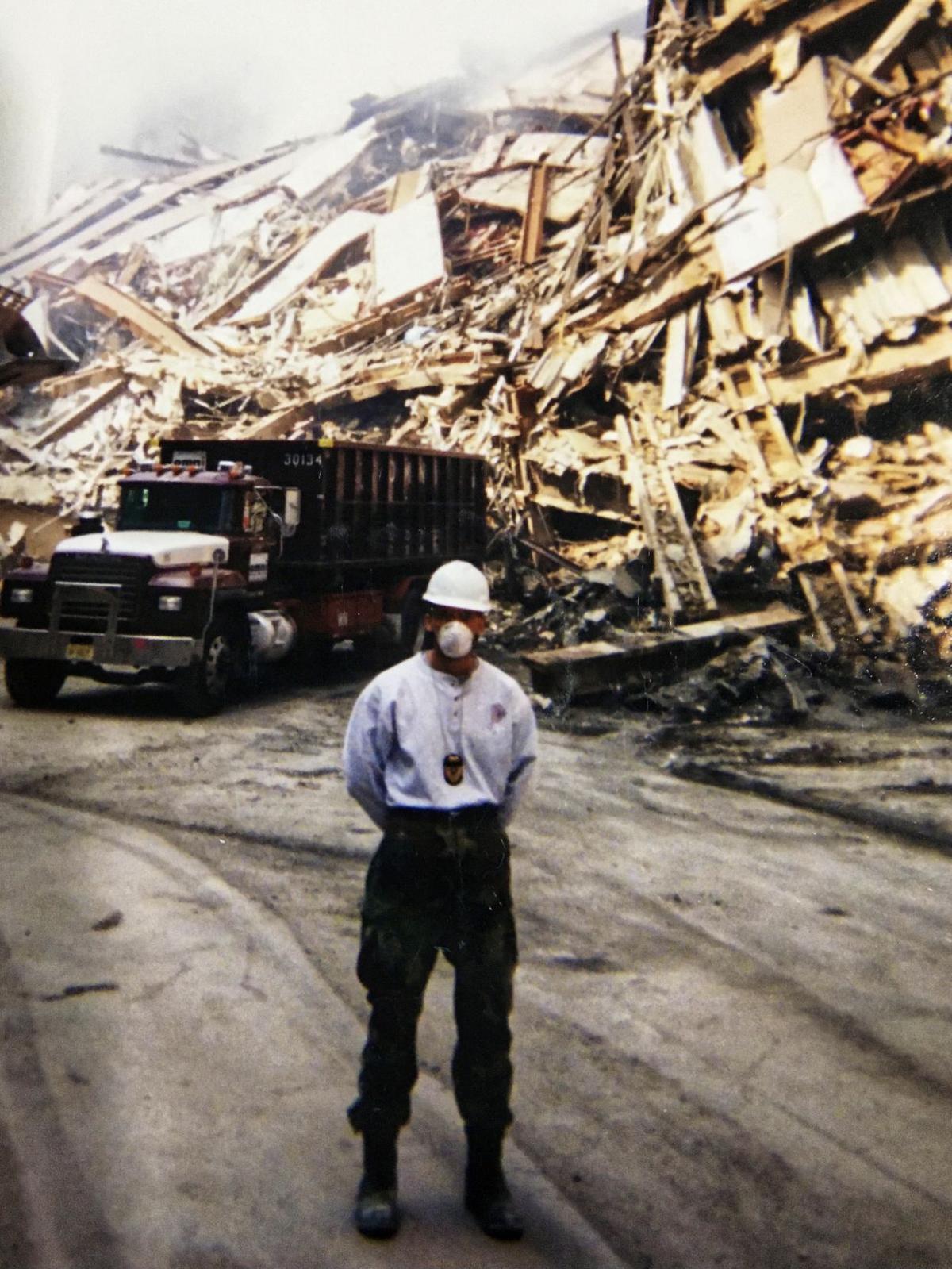 Lafayette detective Kurt Sinks stands in front of the debris caused from the South Tower collapsing on 9/11. Sinks volunteered at ground zero for four days. 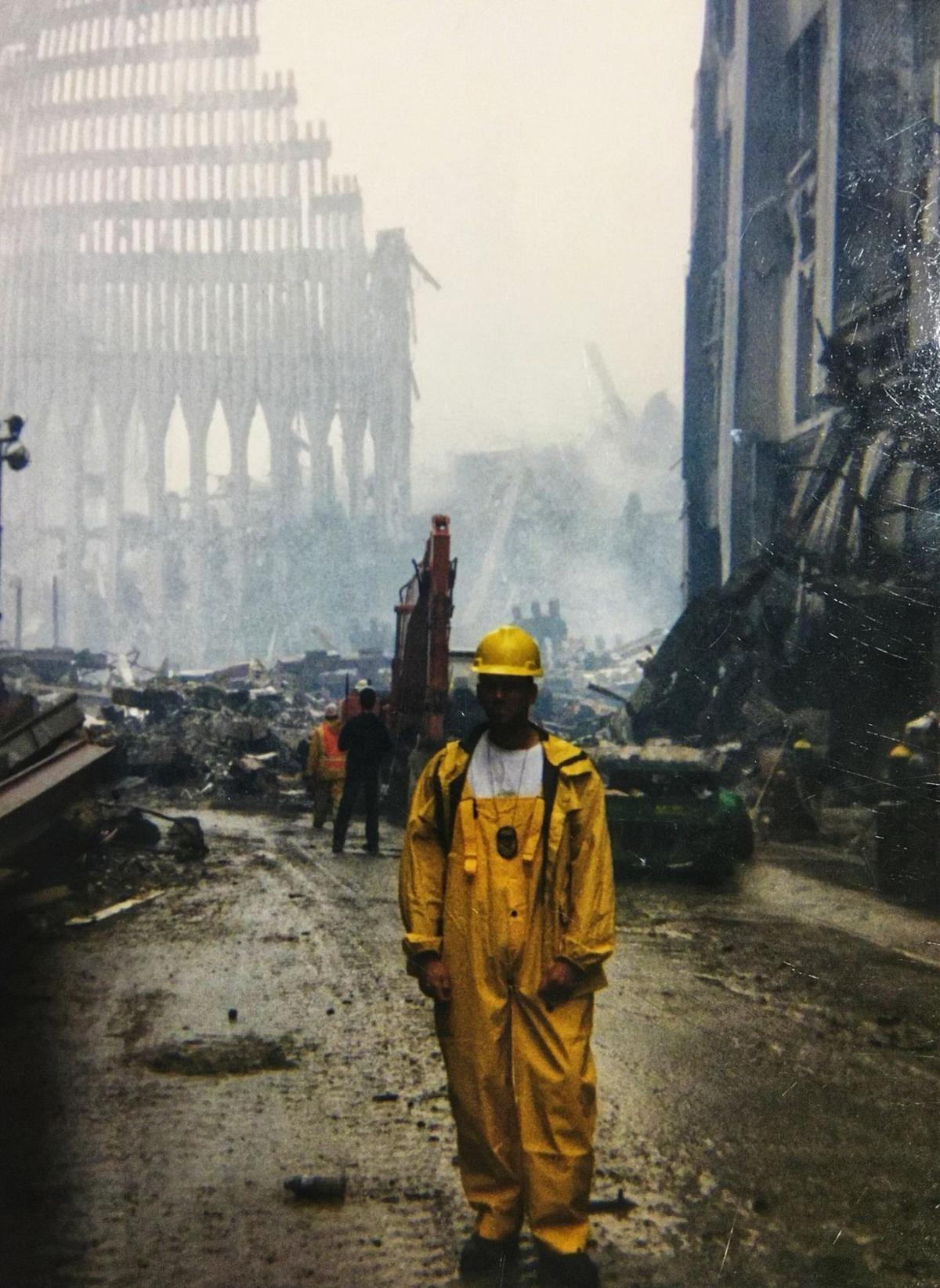 Kurt Sinks standing in front of ground zero. For the four days he volunteered at ground zero, he helped clear the debris from the site. 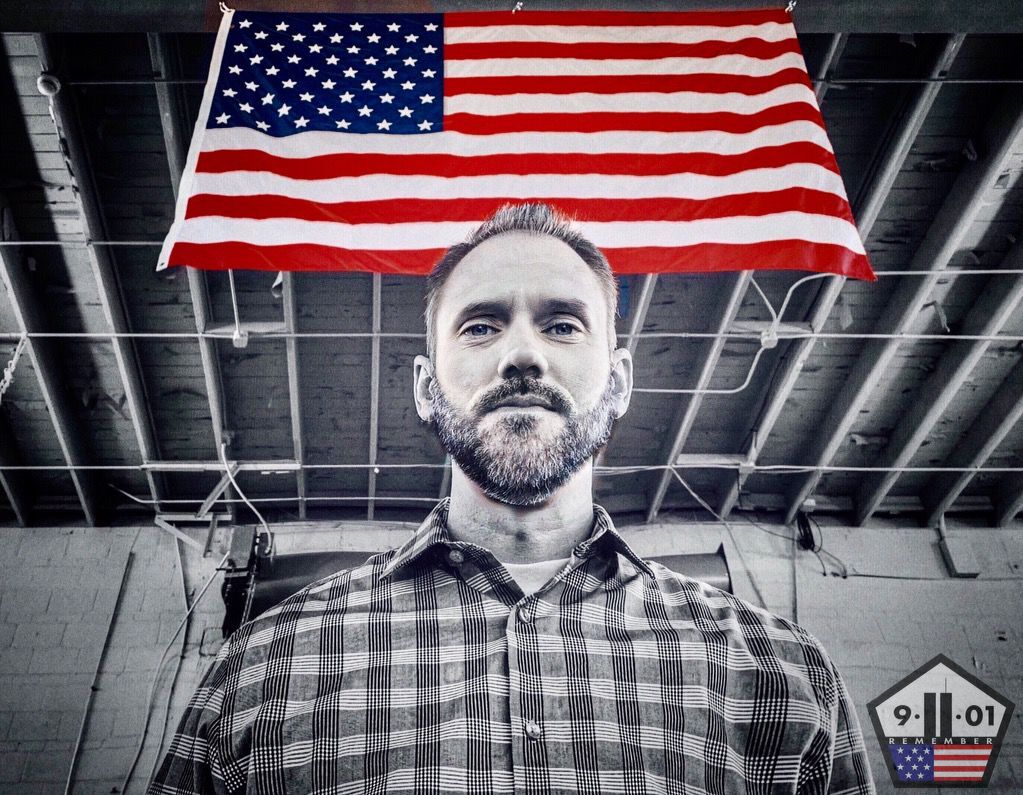 Kurt Sinks was one of hundreds of volunteers to be interviewed for the 9/11 Oral History Project, an initiative former President Donald Trump began while he was in office.

Lafayette detective Kurt Sinks stands in front of the debris caused from the South Tower collapsing on 9/11. Sinks volunteered at ground zero for four days.

Kurt Sinks standing in front of ground zero. For the four days he volunteered at ground zero, he helped clear the debris from the site.

Kurt Sinks was one of hundreds of volunteers to be interviewed for the 9/11 Oral History Project, an initiative former President Donald Trump began while he was in office.

Kurt Sinks came in to work late on Tuesday, Sept. 11, 2001. He had been out of town the night before, and by the time he arrived at his job at Jasper County Community Corrections, a plane had already hit the first tower.

At the time, Sinks didn’t know that it was a terrorist attack.

“Well that’s sad, hopefully, you know, there wasn’t too many people injured or killed in the plane crash,” Sinks said to himself after watching the first plane crash. “It was just a couple of minutes later, when someone came running into the office that I was in and said a second plane just hit the tower, and it’s a terrorist attack.”

Sinks decided to go to New York and help at ground zero after watching the evening coverage of the attacks with his family, he said. A woman, whose husband was a missing first responder, was being interviewed on TV, pleading for people to help search for survivors.

“I just felt very strongly that I could help in some way,” Sinks said.

Sinks then contacted one of the fire departments in New York City, who told him to bring his credentials and fly out to be put in either a search or serving role at ground zero. He left for New York on Sept. 12 and arrived in the early hours of Sept. 13, where he said he was met with an onslaught of rain that made the ground feel like paste.

But instead of writing it down on paper, the man rolled up Sinks’ sleeve and wrote it on his forearm, telling him that if Sinks were to die while working on the site, his social security number would be used to identify him.

“It was that very moment that the reality set in where I was at,” Sinks said. “I had watched it on TV for a day and a half, but when I actually got there and was at the site and could see this and smell this and taste it, and things of that nature started taking place, that realism of what a dangerous place I was at set in.”

Sinks worked at the site for four days, first as part of the shoveling crew. His job was to shovel the debris and clear out specific areas of ground zero.

On the second day, he was then moved to the “bucket brigade,” a long line of men and women who lined up at what was once the base of the towers and passed buckets filled with debris to a roadway where it was discarded.

Sinks said he had never been so far out from Indiana in the United States, and had never seen the World Trade Center before he started working on its remains. All he could gather from the two buildings was twisted metal and the thick smoke and intense heat from active fires around the devastation.

“It looked like a warzone,” Sinks said. “...the air was filled with debris. You could see it, smell it and we can even taste it.”

One sense that remained dormant was sound. Out of the hundreds of volunteers that came to help clear the debris and look for survivors, the only thing that could be heard was the oxygen sensors the firefighters wore on their uniforms.

“You try to put 20 people in a room and keep them quiet for two minutes, it’d be tough,” Sinks said. “But out in ground zero there were hundreds of us working at that site, and you could hear a pin drop.”

Every now and then, the sound of a whistle would go off, breaking that silence. And when the whistle went off, everybody knew to stop whatever they were doing and to listen for survivors shouting for someone to help them, Sinks said.

“Unfortunately, as we all later learned, there would never be anyone yelling for help,” Sinks said.

The work was physically demanding, Sinks said, and whenever he had a break, he would go to his car and sleep in the backseat for a couple of hours before going back to work.

But despite fighting fatigue and exhaustion, nobody wanted to quit the work they were doing.

“Everybody was tired, but nobody cared,” Sinks said. “At that point it was just a matter of doing the work. Doing what needed to be done.”

It wasn’t until Sinks was walking back to his car one day after working at ground zero that the emotional aspect of his work came to light.

“I do specifically remember that walk from ground zero, to my car, would kind of be when (I) would start thinking about some of the stuff (I’d) seen and wondering if there’s more attacks coming,” Sinks said.

Even in the silence and solemness of working at ground zero, there were still moments that made volunteering worth it for Sinks.

As the volunteers worked, there were people who lined up on the streets with signs, thanking the first responders for their service.

Sinks recalled a time when he and several volunteers were taking a break and heard applause. There, they saw civilians with American flags, homemade signs and posters thanking the volunteers. A couple was let through by a member of the military and they hugged the volunteers while crying, thanking Sinks and the others for their work and praying for their safety.

“It was just incredible,” Sinks said. “Their actions right then truly made a difference to those of us that were leaving this site.”

The second day that Sinks worked at the site was the day former President George W. Bush arrived at ground zero. Secret Service and FBI agents told Sinks and the other workers to get out of the pit they were working on, which was when Sinks said he met Sean Murtha.

Murtha, now retired, worked in the 8th precinct in Brooklyn for the NYPD. As the two men walked from the area they were told to leave, Murtha asked where Sinks was from.

“I told him, ‘Indiana,’ and he gave me, on the back of a safety mask, he just wrote Sean and his phone number,” Sinks said. “He told me, ‘I live on Long Island, if you need a shower (or) sleep in a guest room, you come out and my family will take care of it.’”

Months later, when Sinks was at home, he found Murtha’s name and number in his wallet and called it.

“He remembered me immediately,” Sinks said. “And a friendship began.”

Since then, Murtha and Sinks have visited each other multiple times, and Murtha was even the best man at Sinks’ wedding. The two are still very close, Sinks said, and he considers Murtha his brother.

“So while the work we were doing there was tough … God still had his hand upon me and guided me every step of the way,” Sinks said.

Sixty police officers died on duty on Sept. 11. The NYPD lost 23, and 37 were from the NYPD Port Authority.

“60 police officers woke up that day and unknowingly said their final goodbyes to their families,” Sinks said. “They went to work in the service of others, wearing the same uniform with the same mission, and their families never saw them again that day.”

Sinks mentions Moira Smith, an NYPD officer who died trying to help others during the attacks. Smith was the first police officer to see the plane hit the first tower and call the attack in. She then repeatedly went into the towers to grab survivors and bring them to safety.

Smith was last seen running into the South Tower as it was collapsing.

Her remains were located in March 2002. A portion of her gun belt and her badge are now on display at the 9/11 Memorial Site at ground zero. She was the only female NYPD officer to die in the attacks.

“It’s people like her that we can never forget,” Sinks said.

Since then, 241 members of the NYPD have died from 9/11 related illnesses, Sinks said.

“We continue to lose these heroes that served honorably at ground zero in the aftermath of the attacks,” he said.

In the years since 9/11, Sinks, who is now a detective for the Lafayette Police Department, shared his story all around, speaking at police organizations, fire departments and American Legions. He and members of Jasper county raised about $13,000 and donated it to NYPD widows and orphans through the Patroller’s Benevolent Association. On Saturday, Sinks will speak at the 9/11 memorial ceremony in Lafayette, which will be held on the pedestrian bridge.

For his service, Sinks received the 2002 Heroism Award from the American Red Cross and an award from then-Indiana governor Frank O’Bannon for outstanding patriotism. Years after 9/11, Purdue President Mitch Daniels wrote a letter to Murtha, thanking him for taking care of Sinks while he worked at the site.

Former President Donald Trump began an initiative called the 9/11 Oral History Project during his tenure in the Oval Office, which interviewed volunteers who worked at ground zero. Both Sinks and Murtha were interviewed about their experiences.

After the interviews concluded, the recordings were locked in the Library of Congress in Washington D.C., but can still be brought up in the basement of the museum at the 9/11 Memorial at ground zero.

“I’m excited that someday, when I take my kids out to New York and to the 9/11 memorial site, they’ll actually be able to bring my interview up on the screen and watch my story,” Sinks said.

“I think that’s a fantastic thing that was done because future generations only know what they hear. They weren’t here when it happened … you know, you hear about it, but you weren’t here to actually experience it.”