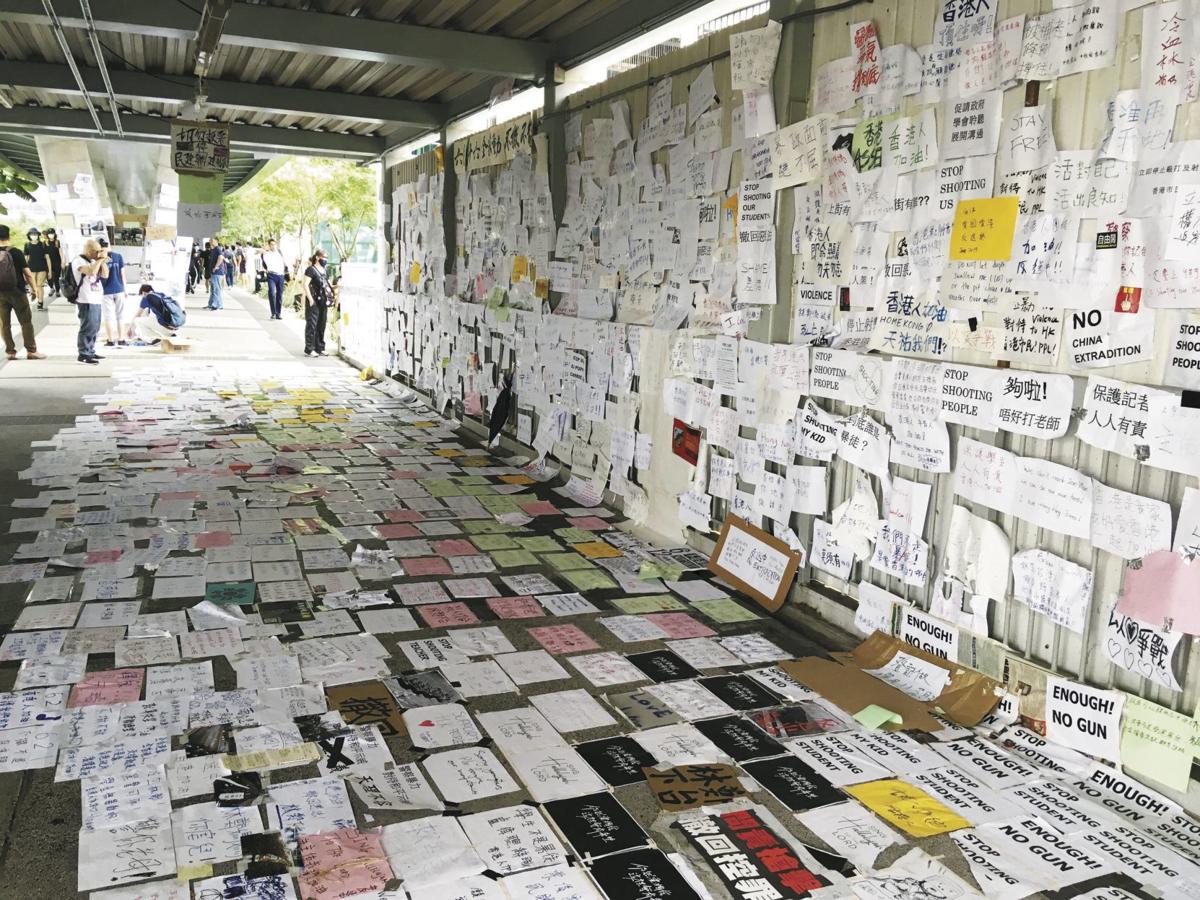 The Admiralty Lennon Wall is covered with posters, artwork and messages, similar to many other locations around Hong Kong, on June 21. 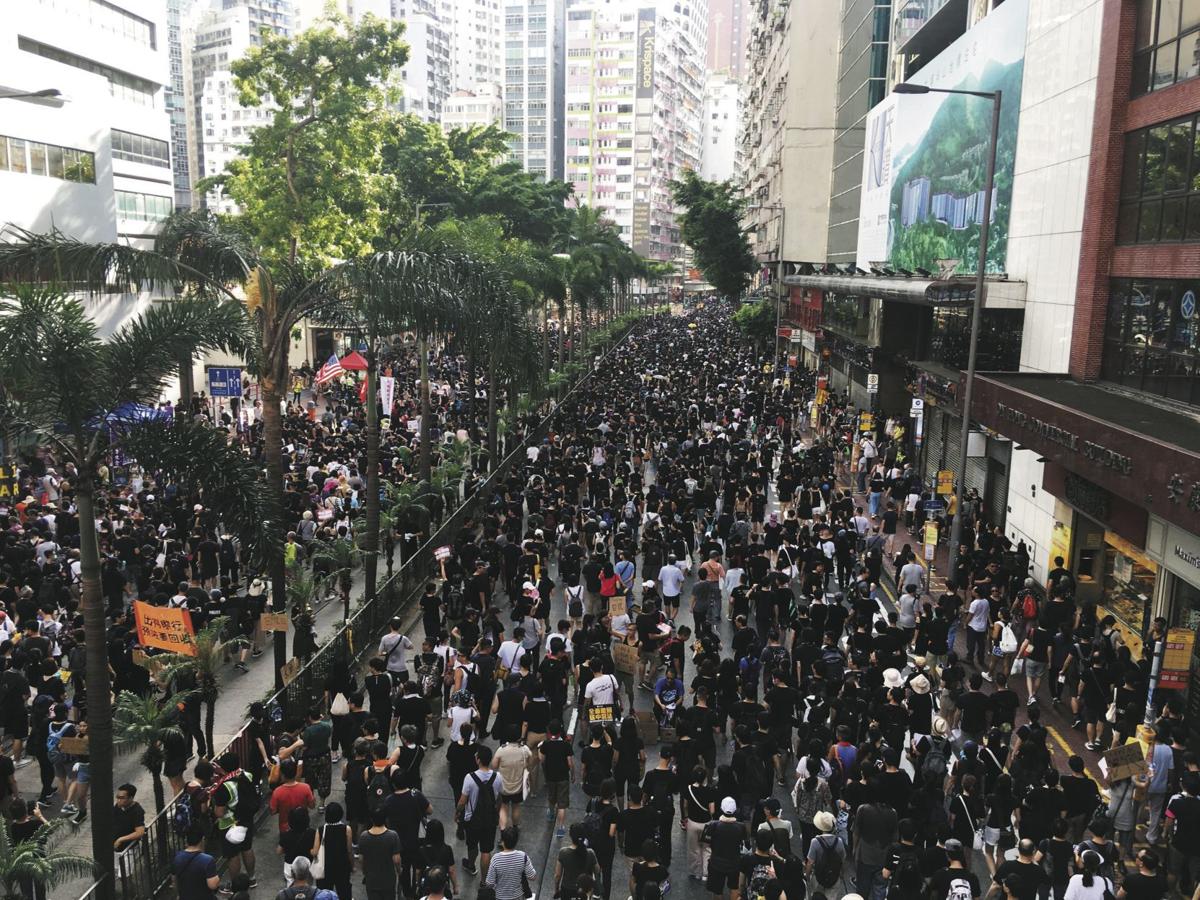 Protestors walk near Wan Chai station on July 21. They wore black for solidarity and shouted slogans such as “Keep it up, Hong Kong!”

The Admiralty Lennon Wall is covered with posters, artwork and messages, similar to many other locations around Hong Kong, on June 21.

Protestors walk near Wan Chai station on July 21. They wore black for solidarity and shouted slogans such as “Keep it up, Hong Kong!”

It’s a tough time for democracy, and that can’t be more blatantly obvious than in Hong Kong.

If you haven’t been paying attention to world news, Hong Kong is a mess. The global financial center has become a center of mass protests, police beatings — and beatings of police — and a deluge of information.

I spent two months in Hong Kong this summer teaching English to low-income students. My family is from Hong Kong and I’ve visited multiple times, but I have never had a visit quite like this one.

Even with some knowledge of Hong Kong culture and history, I found myself sitting back and listening to people’s opinions, trying to get a sense of the complexity of the issue. There were rational arguments on both sides but the size of the conflict overwhelmed all meaningful discussion. Police beatings, flag burnings and bystander arrests made headlines, but not measured deliberation and proposals.

Everyone was in a state of nervousness. It didn’t help that WhatsApp, WeChat, Facebook and transportation app notifications served as a constant reminder that their home might be the next target of the protests.

In the midst of all this, I was told to create a sense of normalcy for the students. I’ve realized it is almost impossible to teach and pretend everything is fine while students are checking their phones because they don’t know if they can get back home safely or not.

At this point, political correctness is thrown out the window. Protestors are fighting for their lives. Protests are planned impromptu on LIHKG, the Hong Kong version of Reddit, and appear unpredictably.

To understand, it is important to be empathetic and remember there is a face behind the mask. The police are in a tough spot as they are quelling unrest while under the watchful eye of the media. Protestors are anxious about their futures with restrictions on freedoms and lack of economic mobility.

But are extreme measures such as storming the legislative building, desecrating the Chinese national emblem, shutting down the airport and striking fear in schoolchildren effective? Does it matter if it is for the sake of “democracy”? Is the traditional harbinger of democracy, the United States, taking any action or are we even in a position as a country to do so?

These debates are happening around Hong Kong all the time. Some think the violence must stop before we can get anything done. Others believe that change only comes with extreme action. They need the international attention to pressure the government to do something. Still others take a pragmatic approach and believe China has fueled the economic growth in Hong Kong for the past decade. They think the only reasonable option is to stay on China’s good side and not ruin the lives they have built for themselves.

Hong Kong’s relationship with democracy is interesting. As a former British colony, the Hong Kong people have never had much power in the government. Hong Kongers were treated as second class citizens by the British and only mass uprisings in 1967 akin to the scale of today’s led to meaningful change.

The legacy of British rule is the establishment of Hong Kong as the gateway to the East. They left Hong Kong with a robust capitalist system and independent judiciary. Most importantly, these serve as reminders that the region is different than the one just a short train ride away.

Those differences inevitably lead to conflict.

There’s a shared resentment that “they are taking our jobs, our homes, our government benefits and our tradition.” Those are some uncanny parallels with the United States.

This resentment is now targeted at the government and an administration that is not directly elected by the people and arguably under the influence of Beijing. The government has made a series of poor decisions which have exacerbated the situation, including not listening to the public, arresting people unfairly and refusing to admit wrongs.

Over the two months I was in Hong Kong, the rhetoric became increasingly toxic and divisive. The protestors and the government have made no progress in working together. Pro-democracy lawmakers have tried to calm the protestors to no avail.

I’ve realized that the solution is not black or white. Protestors can aim high but at this rate they need to expect low. The government also can’t underestimate the resolve of the protestors. Hong Kong people are tired — it’s the 13th week of protests — but they will push until there is change.

There’s always different ways of thinking about how to live. There isn’t a right or wrong answer; yin and yang coexist. Dichotomies can live in harmony.

The question is how we get there.