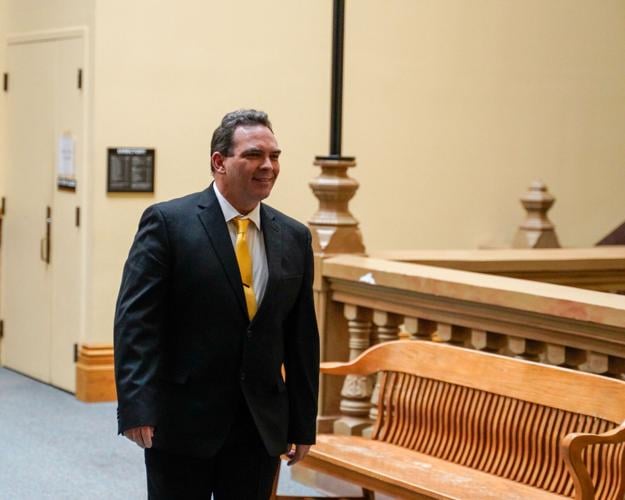 Michael Barnett returns to the courtroom at the Tippecanoe County Courthouse on Monday afternoon. 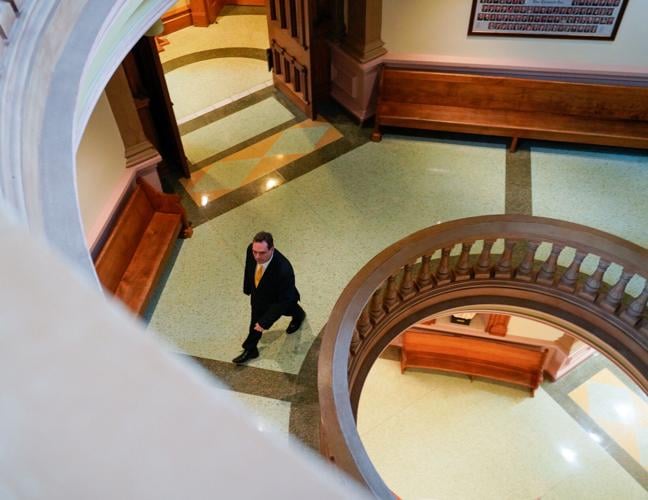 Michael Barnett walks through the rotunda of the Tippecanoe County Courthouse during a recess in his trial on Monday afternoon.

Michael Barnett returns to the courtroom at the Tippecanoe County Courthouse on Monday afternoon.

Michael Barnett walks through the rotunda of the Tippecanoe County Courthouse during a recess in his trial on Monday afternoon.

The defense attorney corrected himself within a second.

The person in question is Natalia Barnett, whose adoptive parents, Michael and Kristine Barnett, left her alone in a Lafayette apartment in July 2013.

Natalia Barnett’s age has been a mystery since she was discovered to be living alone in 2014. While she was originally believed to be 8 when she was adopted by the Barnetts in 2010, a Marion County judge legally changed Barnett’s age to 22 in 2012, based on an opinion from her primary care physician and her social worker.

Superior Court Judge Steven Meyer recently declared that Barnett’s age can no longer be litigated in this trial, spurring multiple objections from deputy prosecutor Jackie Starbuck as the case began its first of trial Monday.

The judge ruled that the words “adult,” “child,” “minor” or any other equitable word cannot be used during the proceedings, and Natalia Barnett can only be referred to as her legal age, being born in 1989.

Just minutes into his opening statement, defense attorney Terrance Kinnard apparently slipped up when he said Michael Barnett left his “adult daughter” in a Lafayette apartment.

Meyers admonished him after the jury left the room, floating the threat of a mistrial if either counsel uses that language again.

Natalia Barnett has a rare form of dwarfism called spondyloepiphyseal. She stands at just under 4 feet tall, Kinnard said, and she used a walker the last time she appeared in the Tippecanoe County Courthouse in March 2020.

The crux of Kinnard’s argument was that while Natalia is a little person, she isn’t disabled.

He said she participates in activities like swimming and dancing as well.

Starbuck began her opening statement by presenting a timeline to the 12-person jury.

Natalia Barnett received surgery in August 2010 for club foot, a birth defect in which feet are twisted or misshapen, Starbuck said. When Natalia's adoptive parents didn’t pick her up from the hospital, the hospital placed her in what Starbuck described as a "halfway house." Her parents didn’t like that, she said, so Natalia was placed in an apartment in Westfield, Indiana, where Michael Barnett would regularly check on her and bring her food. He also paid her rent.

Kinnard added that the Barnetts hired a home health aide to help Natalia adapt to her new living arrangement. Additionally, they set her up for Medicare and Medicaid, food stamps and disability benefits, all of which she began receiving within three months of living alone.

Natalia was moved to a Lafayette apartment in July 2013, and her parents, along with their three sons, moved to Canada less than 30 days later.

The apartment Natalia was living in didn’t have any accommodations for a little person, Starbuck said, and it took the apartment complex some time to even install a lower handle and lock for her front door.

“Mr. Barnett didn’t talk to Natalia after that,” Starbuck said. “(He) didn’t see her after that. (He) didn’t come in to check on her.”

“He didn’t call Natalia to see if she was OK,” Starbuck continued. “He didn’t check on her.”

But Natalia didn’t call her parents, either, which Kinnard pointed out she could have done with the cell phone they provided her. He said Natalia “wanted nothing to do with her parents” and preferred to live on her own.

“She had the ability to contact them at any time,” he said.

Kinnard explained to the jury that the Barnetts left for Canada so that their son Jake could study at Perimeter Institute for Theoretical Physics in Ontario, Canada, by invitation of famed physicist Stephen Hawking.

Kinnard said Jake Barnett is “one of the six smartest people in the world.” He claimed the boy was named the “single smartest person in the world at age 12,” but he didn’t say who made that declaration.

Jake graduated from Indiana University at just 14 years old, studying astrophysics. Claims that his research challenges that of Albert Einstein circulated popular media in the early 2010s, but his work was apparently never published nor was it peer-reviewed by any known experts. The fact that Jake Barnett was invited to the institute in Ontario by Hawking is apparently unverified.

Kinnard asked potential jurors in the morning during jury selection whether a parent should give each of their children equal attention, or whether some children sometimes need more attention than others, hinting at Barnett's decision to leave Natalia in Lafayette while they took Jake to Ontario.

Jurors seemed to agree that children can need different levels of attention and care.

He also asked jurors repeatedly of the difference between morality and legality, challenging whether they could set aside their own opinions of morality and just consider the legality of the case.

The Barnett couple adopted Natalia from Ukraine in 2010. Natalia’s Ukraine birth certificate indicated that she was 7 years old at the time, and a doctor from Peyton Manning Children’s Hospital in Indianapolis estimated that she was about 8, court records show. But the Barnetts soon began to suspect she was much older than they initially thought.

They said Natalia was a threat to them and that she tried to kill Kristine on more than one occasion.

"Natalia would do things like place clear thumbtacks on the stairs face up, so that when we would walk up the stairs, we would be stepping on thumbtacks to pain and injure ourselves," Michael Barnett said on "Good Morning America" in 2019.

Michael Barnett said Kristine discovered evidence of a monthly menstrual cycle, which would imply that Natalia was older than 8 when adopted. Shortly after, Natalia attempted to poison Kristine by pouring a bottle of Pine Sol into her coffee mug, Michael said.

"She had attempted to kill my wife for the second time, this time by trying to pull her into an electric fence," he said.

Based on opinions from Natalia’s primary care physician and her social worker, the Barnetts had her birth year legally changed to 1989 in a Marion County probate court in 2012, which would make her an adult during the time of the alleged neglect.

Natalia appeared on the "Dr. Phil Show" in 2019 to set the record straight, denying allegations that she lied about her age and attempted to or threatened to kill her adoptive parents. She now lives with a new adoptive family in Indiana, who also denied allegations that she misrepresented her age. They denied that she menstruates, as Kristine Barnett claimed, as well.

The Natalia Barnett story: Adopted father acquitted of neglect of a dependent charges