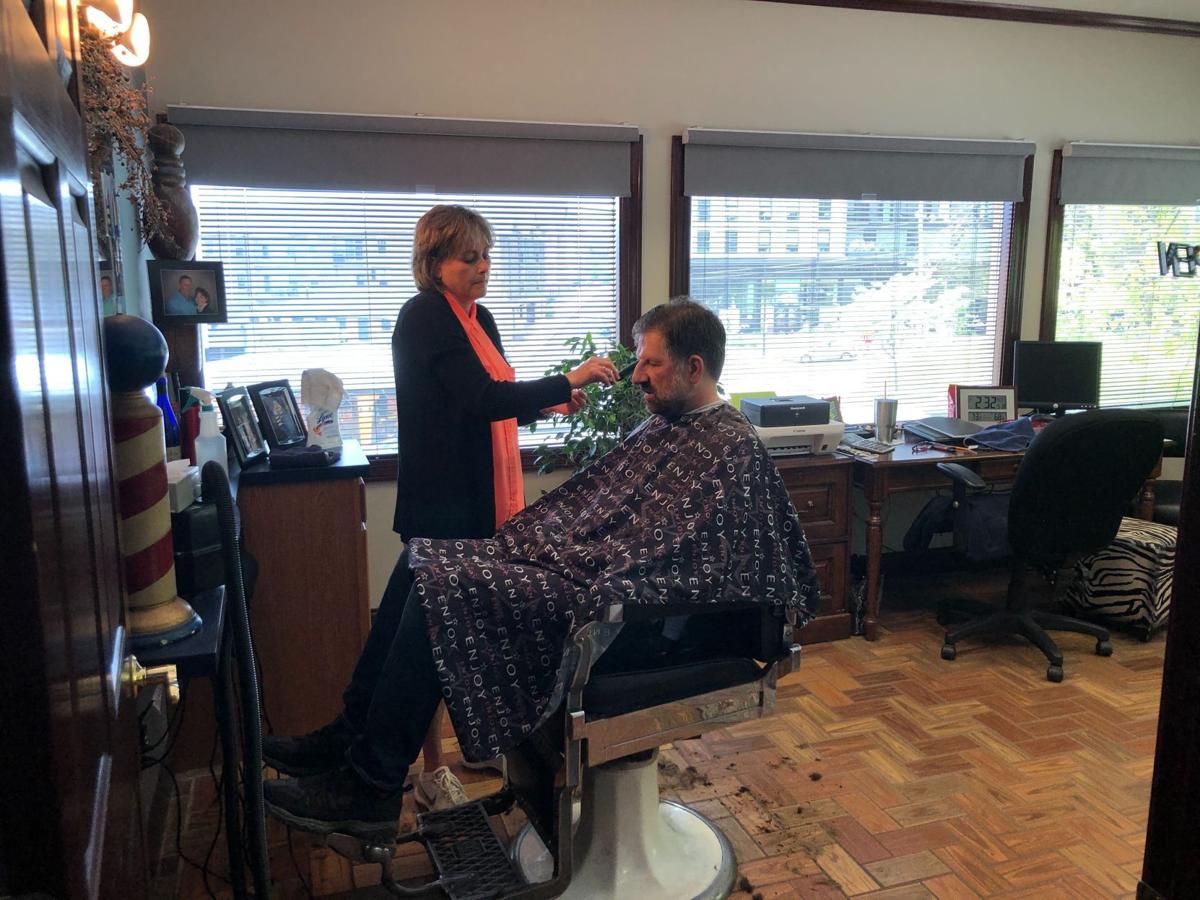 Darci McKinney cuts Sorin Matei's hair at Razor's Edge barber shop. "I look like a lion," Matei said, who hadn't had his hair cut in months. 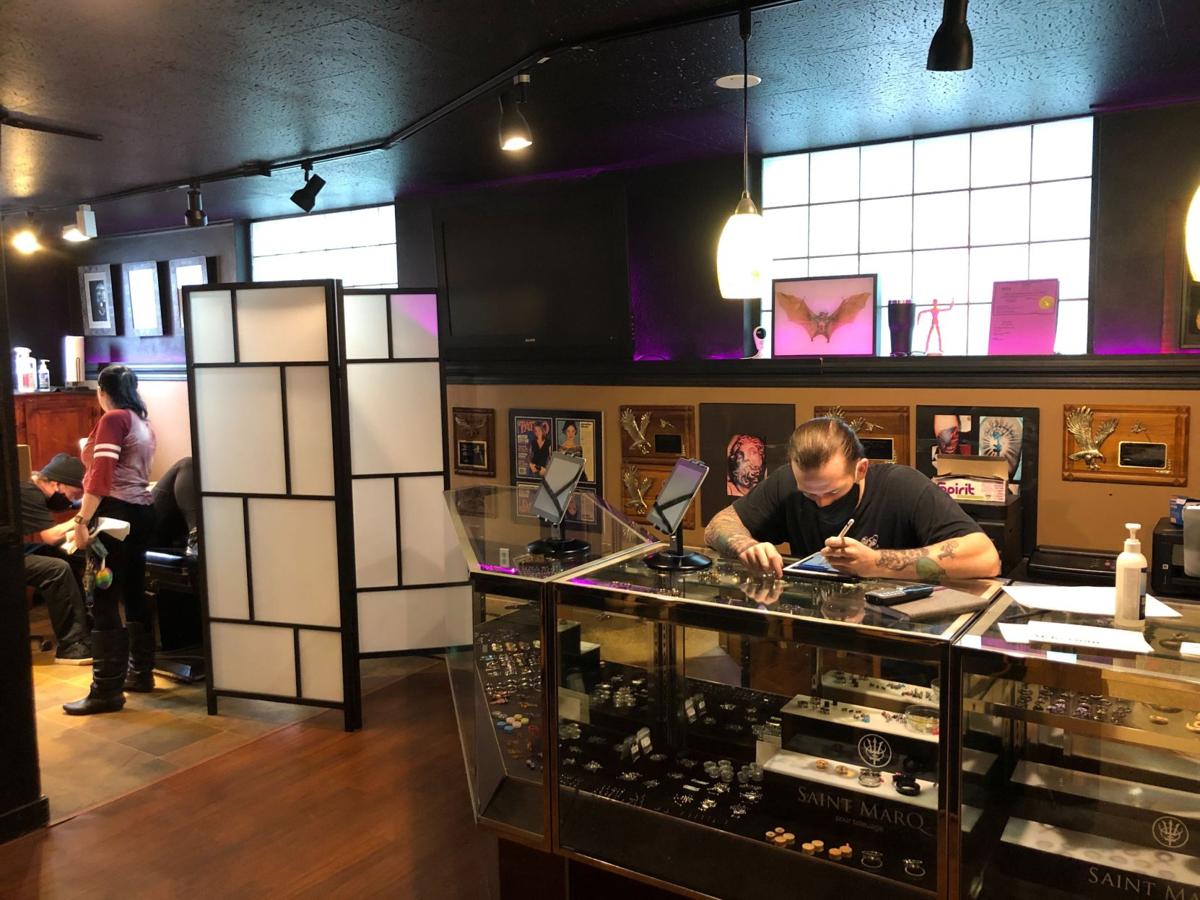 Tyler Danta, a tattoo artist at New Breed Tattoo shop, wears a mask as he prepares a design.

Darci McKinney cuts Sorin Matei's hair at Razor's Edge barber shop. "I look like a lion," Matei said, who hadn't had his hair cut in months.

Tyler Danta, a tattoo artist at New Breed Tattoo shop, wears a mask as he prepares a design.

As the summer months begin and West Lafayette business owners prepare for an annual sales slump, returning graduates and the reopening of certain industries offered a brief respite last week.

The Discount Den, a staple among Purdue students, reopened on May 4 after having closed its doors for around six weeks due to COVID-19. Darla Rothenberger, an employee at the Den, said the store saw an influx of customers last week as graduating seniors stopped in.

Rothenberger said she expected a “long, slow summer” for in-person customers. The Den has filled many online orders since its in-person location closed earlier this spring, she added, weakening the blow of lost student sales.

Dawson and Daisy Boutique, which opened its first location on Wabash Landing in May 2017, has also reopened. Bani Gothra, a student in the College of Liberal Arts and employee at the boutique, said many graduating seniors stopped by to purchase Purdue gear.

Gothra attributed part of the increase in shoppers not to enhanced safety protocols, but to simply leaving the door open. By taking this measure, she said, the boutique dispelled uncertainty about whether it was allowing customers to walk in.

Salons and tattoo shops in Tippecanoe County were allowed to open by appointment only starting May 11. While some, including Henni’s Hairshop, have decided to remain closed, most others were open to business Monday.

Razor’s Edge barber shop owner Darci McKinney said that when she opened on May 11, customers streamed in. The first two days of business, she cut hair for 58 clients. That number surpassed 75 by the end of the week, compared to a typical weekly average of 40 to 50 clients during the semester at Purdue.

“Last week was very, very busy,” she said. “I’ve been doing this for 34 years, I’ve never had problems, but by the time Tuesday night I sat down in my chair at home, my knees were throbbing.”

When New Breed Tattoo shop opened last week, piercing artist Justin Seibert said he was slammed with appointments “all day, every day.” Employees and customers must wear masks while in the shop, but for certain piercings, protective gear has to come off.

On Monday, Seibert pierced a woman’s tongue. He said gaping mouths can make his work riskier, but only if the client is unwilling to sit still and listen to his directives. For ear piercings, clients are allowed to leave their masks on; to pierce noses, Seibert has clients slide masks down to cover only their mouths.

Razor Edge barber shop has capacity for only two customers at a time, McKinney said, which has helped to maintain physical distancing. She wipes down chairs after dousing them in Lysol spray and disinfects the front doorknobs five times a day.

McKinney did not wear a face mask while cutting hair, and while she encourages customers to bring protective equipment, it is not mandatory. She allows clients to wear masks during haircuts, but she prefers people to remove them.

“It’s really hard to cut someone’s hair with a mask on,” she said. “I make them take it off and just hold it on their nose if they wish to keep the mask on.”

Other salons, such as Beaux Cheveux and Happy Nails, are preventing customers from entering without masks and requiring employees to wear them. Megan Johnson, a hair stylist at Beaux Cheveux, said the salon adds 15 minutes to appointments to account for the extra time needed to cut around the mask.

“We haven’t had any issues with customers wearing them,” she said. “Kids are the only ones where it’s a little bit tougher, depending on the person. If this is the new norm, it’s the new norm.”

The Silver Dipper, a local ice cream shop, reopened both of its West Lafayette locations on May 5. Erika Caylor, an employee at Silver Dipper on South River Road, said that upon opening, both locations have been taking additional measures to maintain cleanliness and protect the health of employees and customers.

Caylor said the Silver Dipper has been busy during evenings and expects business to pick up as more residents learn the store is open.

Von’s Shops, a revered book, records, clothing and crafts store, reopened on May 4 after doing only delivery throughout April. Customers and employees must wear masks, and each department within the building can hold up to four patrons at a time. Seniors or at-risk community members are encouraged to shop from 9 to 10 a.m., when the store is "nearly empty," according to a sign posted on the entrance.

Alexis Trumbower, an employee at Von’s, said she has not experienced any complaints from customers about the store’s mask requirement. Trumbower said the store has had more business than anticipated, but not enough to compensate for its usual popularity. She hopes business picks up as the summer progresses.

"Please respect those more worried than you are," reads the sign on Von's door. "Masks & bandannas available if you need one."