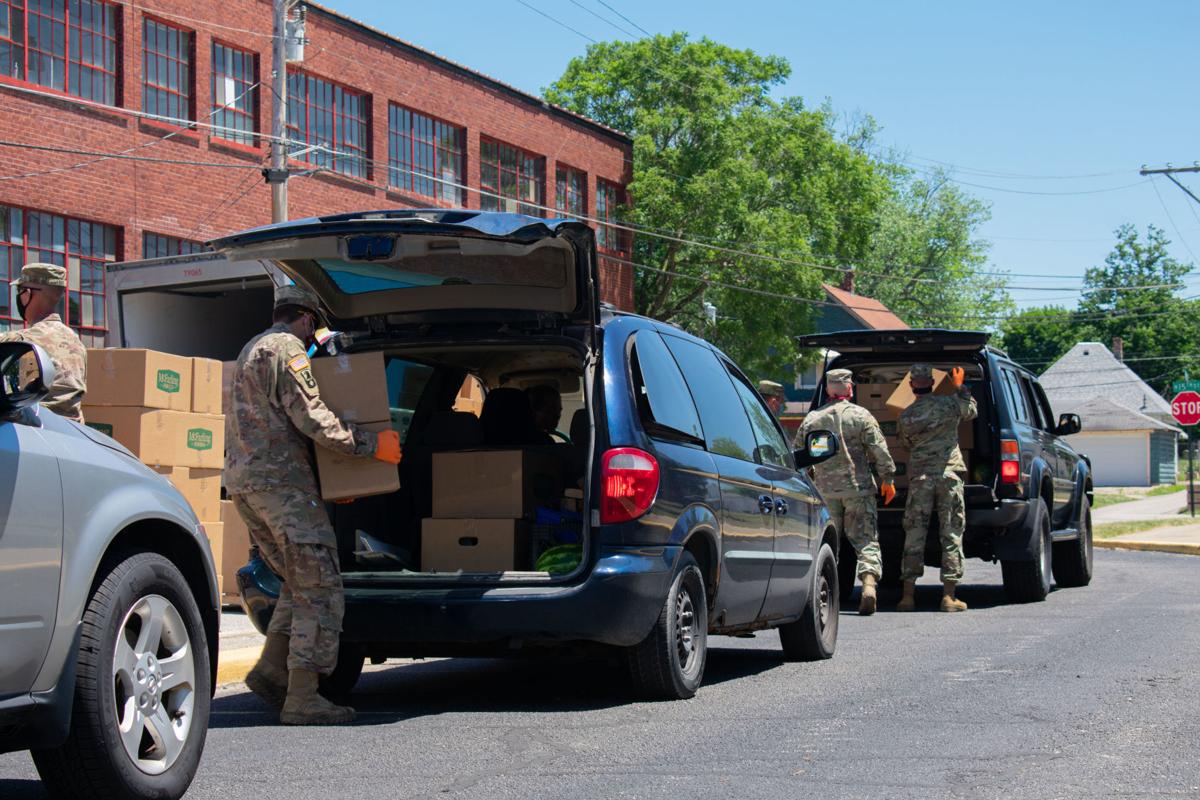 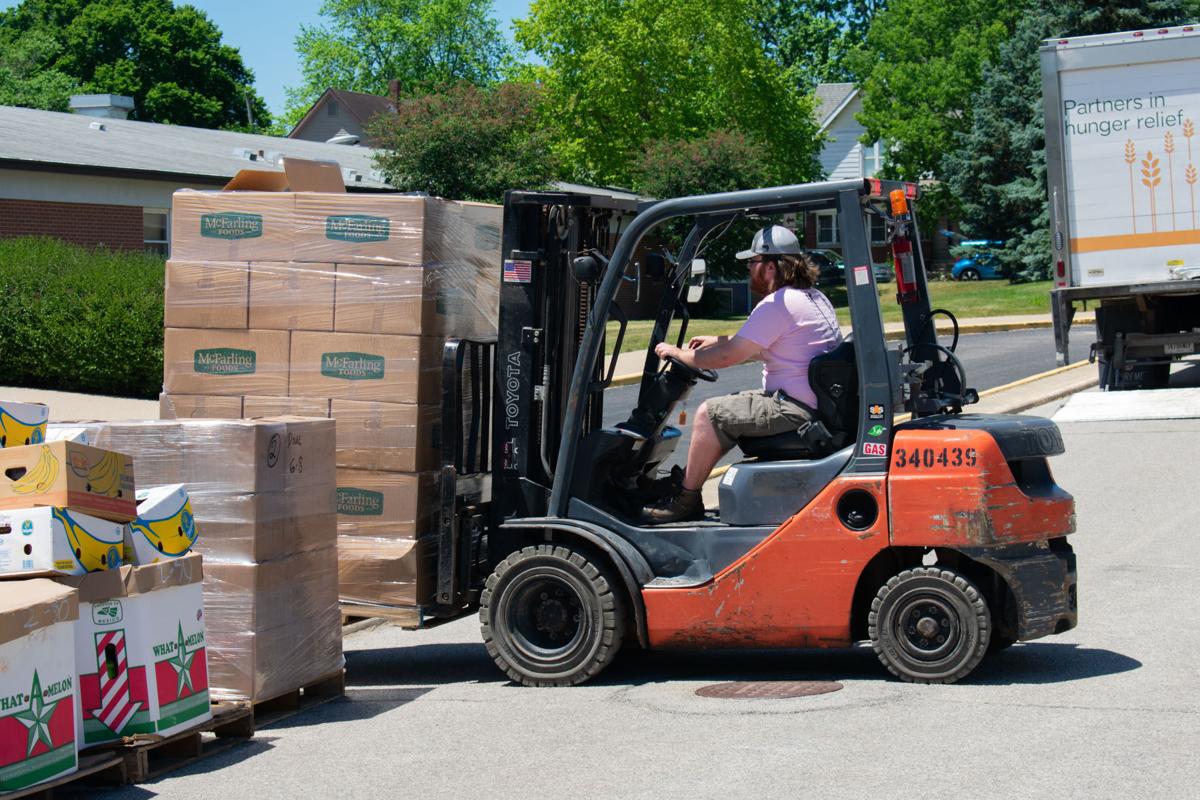 Eighty-year-old Mary Day sits in her maroon sedan Thursday, sunglasses on, lined up behind dozens of cars, waiting for her turn at Food Finders' drive-thru food pantry.

When she pulls to the front of the line, three members of the National Guard load three boxes into her trunk. One worker, gloved and masked in a camouflage uniform, hugs a watermelon and places it into her trunk. Day smiles and thanks the workers before driving off.

Members of the Indiana National Guard ease pallets of boxes onto a forklift for pantry coordinator Ted Sparger to set down near the drive-thru point. Food Finders has set up shop two days a week near Linnwood Elementary School in Lafayette since late March.

Each family, low-income or otherwise, receives three boxes when their cars roll through the drive-thru point.

One weighs more than 50 pounds, stuffed with a bag of hundreds of frozen chicken nuggets, rectangular blocks of cheese slices and 300 frozen bacon slices. The other two boxes are about 20 pounds each, containing cartons of milk, cream cheese and fresh produce.

“We did notice that after getting several weeks of our nonperishable foods, plus some random produce and meat, people are really lining up to get these boxes,” she says. “There’s been a real recognition that low-income people don’t need to get just reject food.”

Food is abundant thanks to the Coronavirus Food Assistance Program, a federal program that began on May 26 to connect farmers who suffered canceled orders and surplus product to food pantries short on supply, Bunder says. The program will span the summer.

“They used to go to dorms or residence halls and restaurants and hotels,” she says, “so it’s really good quality food, and it’s been repackaged for families.”

Two dozen National Guard members, who have become familiar with Lafayette over a period of two months, load boxes into trunks and tailgates Thursday afternoon. Antwan Robinson, 44, is directing traffic.

In fours, cars pull forward and are swarmed by Robinson’s colleagues, who have mastered the trade since the state sent the guard to assist at food banks. Sparger says the members have been an “immense” help, freeing up time for him and other pantry coordinators to deliver food to more locations.

“Probably the biggest factor is having the National Guard here,” Sparger says, “and then also having our CFAP stuff from the federal government. Those two things alone have made it so much easier for us as a whole.”

The scene is a stark contrast from two months earlier, when layoffs increased the number of families in need while food donations from grocery stores evaporated amid broken supply chains and frenzied consumer demand. Bunder says that at the drive-thru’s peak, 600 households were served each day twice a week.

Now, Bunder says, Food Finders finishes the three-hour lines with 50 or so boxes leftover, and closer to 400 boxes are distributed. Sparger estimates the food bank has twice the amount of food it did in spring, and more hands to distribute it to needy families.

Pop-up sites have been arranged to donate extra boxes, with one open at Tippecanoe Mall from 11 a.m. to 1 p.m. each Friday, which Sparger says handed out 240 last week. Others in nearby apartment complexes, like Romney Meadows and Briarwood Apartments, are listed on the Food Finders website.

“It’s nice because then we can get to some of the different folks that maybe aren’t able to get over here, or are at work, and at least give them an opportunity to come get something they might not otherwise get,” Sparger says.

Catherine MacLeod, a resource coordinator at Food Finders, serves clients at the curbside walk-up location two blocks away. Her spot serves only about 40 people a day, she says, but is necessary for those without cars who cannot use the drive-thru.

The boxes are deconstructed and distributed in pieces at the walk-in to make for easier carrying. MacLeod helps one woman arrange a box full of vegetables, milk cartons and frozen meat in a stroller, stacking plastic bags containing granola bars and canned beans on top.

"She had a stroller," MacLeod says as the woman pushes the stroller down the sidewalk, "somebody else came on a bike, somebody else is walking, somebody's taking the bus. So we're trying to accommodate being able to walk with these things that are super heavy."

Food Finders has more food than clients of the food pantry can consume. Bunder is working with local school corporations, as well as apartment complexes, to donate the remainder.

“We’re just trying to have a tsunami of food out in the community,” Bunder says. “So that people, when they do get a stimulus check or some unemployment, they can use it on rent or their car.”