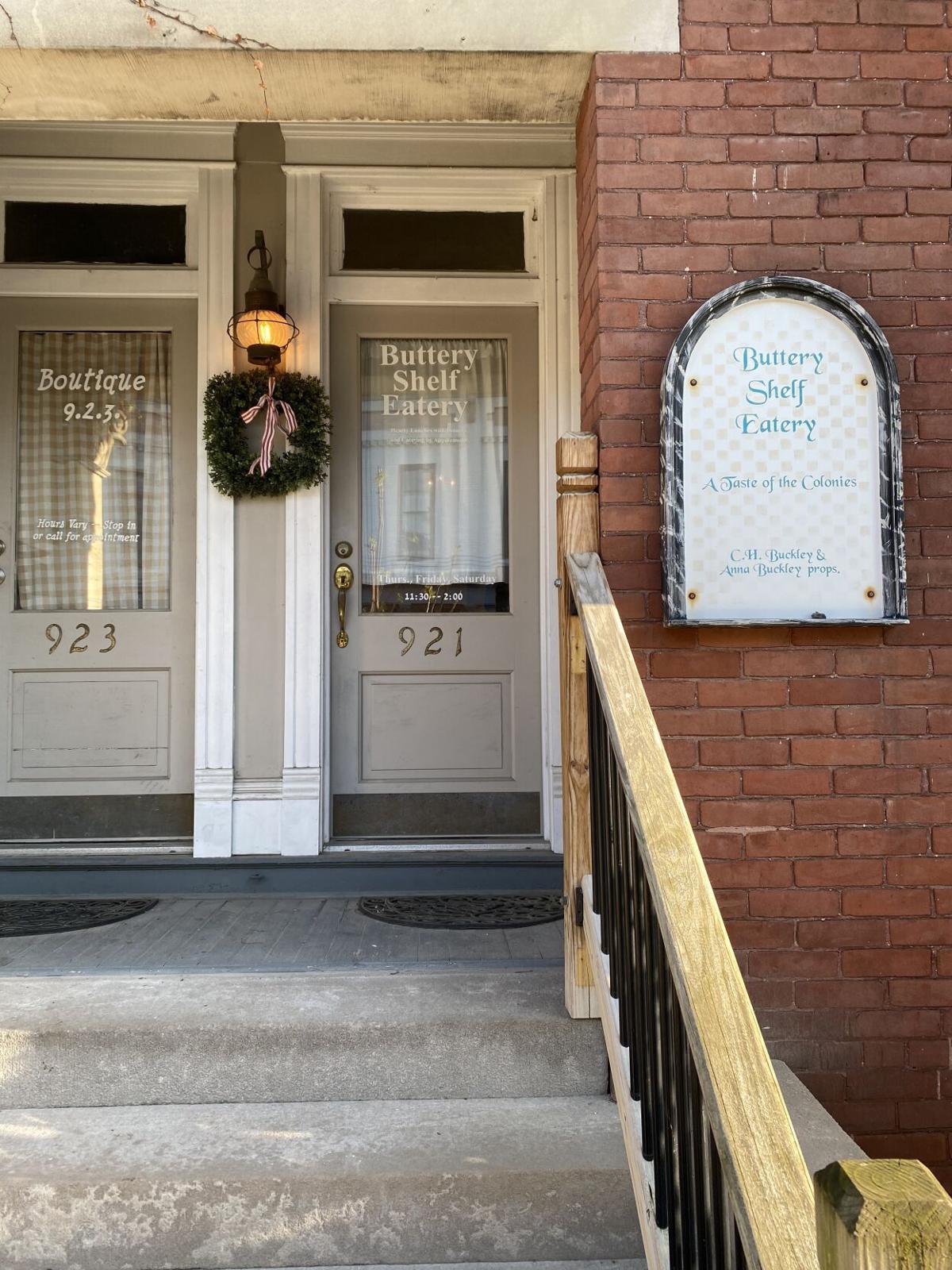 The entrance to the Buttery Shelf Eatery, at 927 Main Street in downtown Lafayette. 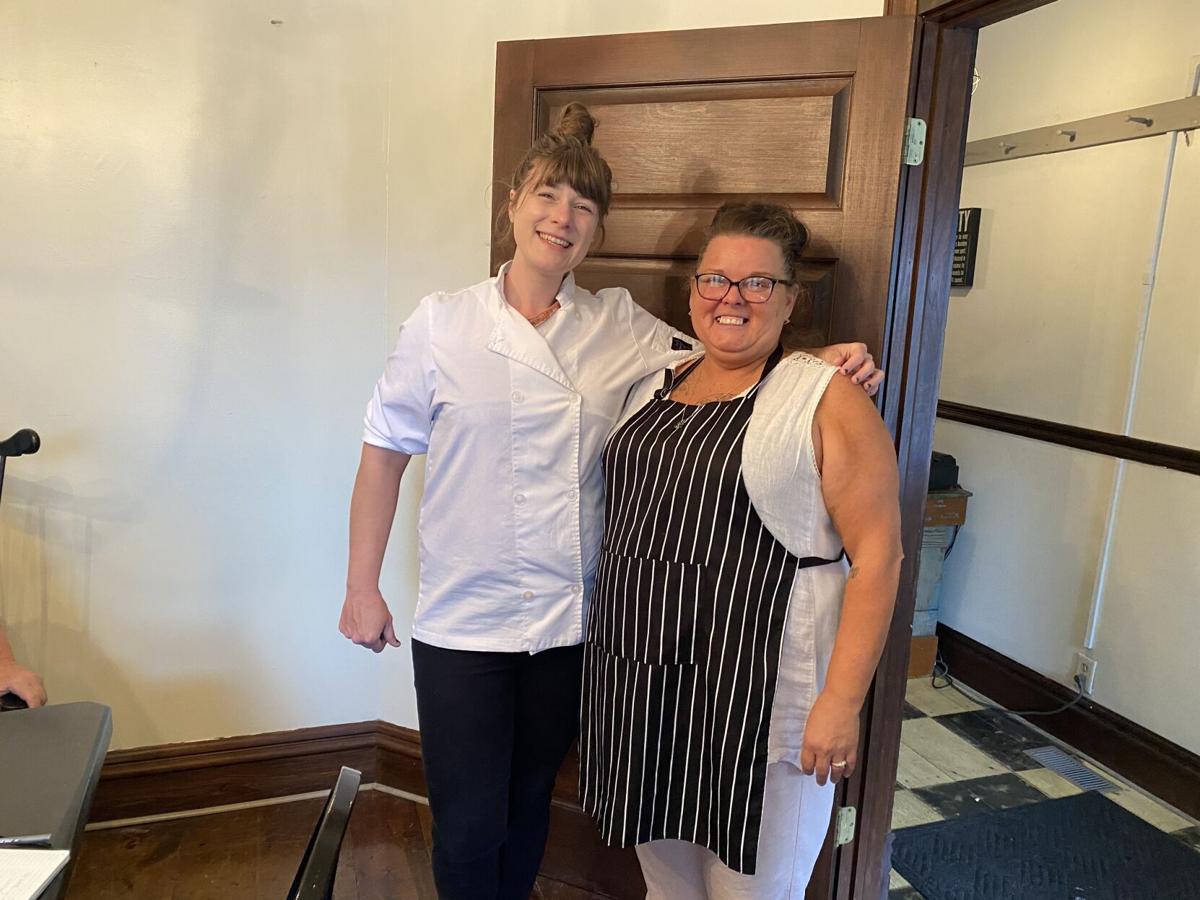 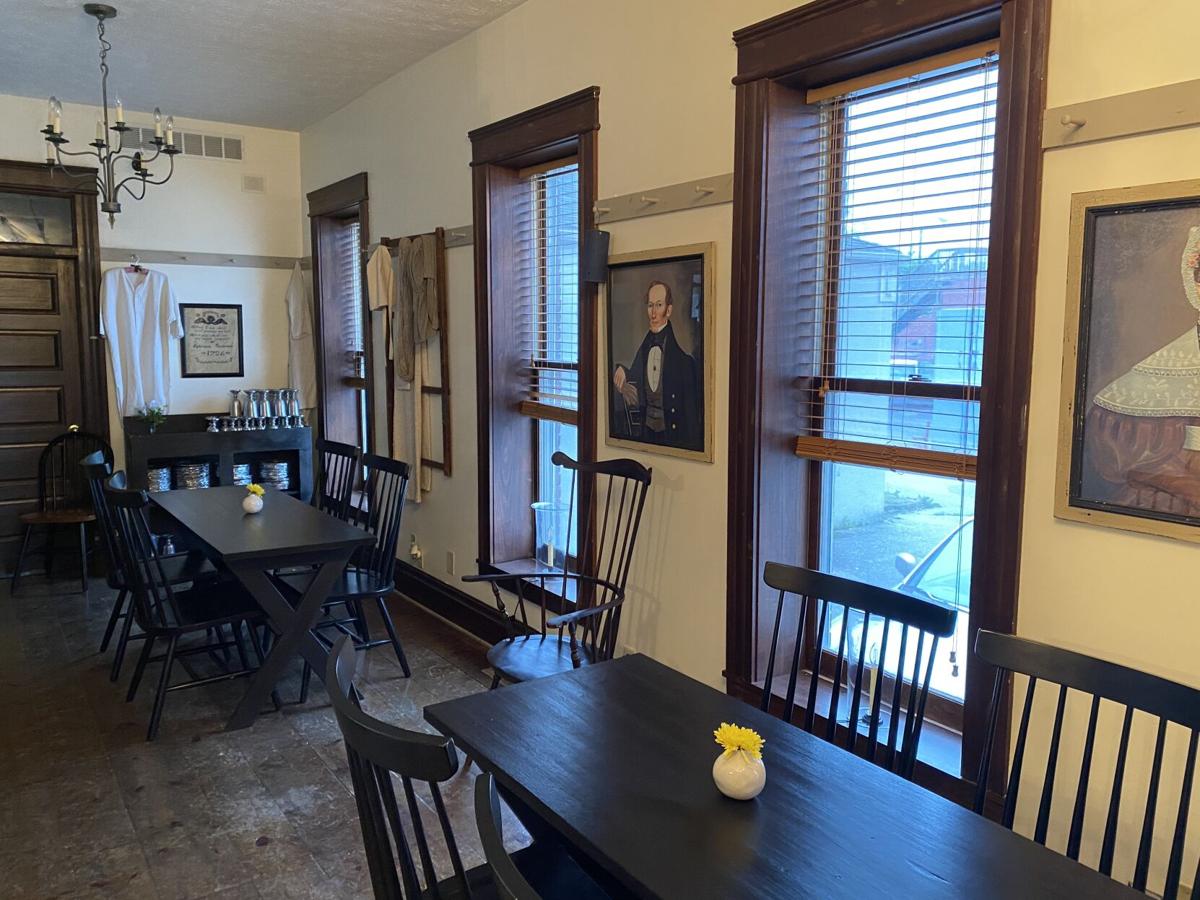 The main dining room at the Buttery Shelf Eatery has portraits of colonial era historical figures on the walls.

The entrance to the Buttery Shelf Eatery, at 927 Main Street in downtown Lafayette.

The main dining room at the Buttery Shelf Eatery has portraits of colonial era historical figures on the walls.

The first thing customers see when they arrive at 927 Main St. in downtown Lafayette is the tombstone-shaped metal sign posted on the brick wall to the right of the entrance.

“Buttery Shelf Eatery,” it reads, in cotton-blue lettering on a white and light brown-checkered background. And underneath that first line, in a slightly smaller font: “A Taste of the Colonies.”

The sign stands out amid the cadre of brick and mortar buildings that line this section of Main Street. The bright colors, the name and creed make the place seem inviting, if not a little peculiar. Just like its owner, Cherrie Buckley.

Buckley has owned the building since the early 2000s and operates the eatery with her daughter, Anna. The restaurant - an extension of Buckley’s charity, Seeds of Hope - started as a way for her to provide food and assistance to recovering addicts and homeless people.

Buckley said she discovered her passion for helping others after reflecting on her personal experience recovering from an addiction to the opioid Demerol, as well as abuse from her then-husband.

“I started 26 years ago, when I was the abused,” Buckley said. “I had been through it all. I’d been addicted after multiple surgeries in a test group at IU Med Center and I had no sense of myself.

“I had married someone who was abusive and left me with a 3-month-old child I had to raise by myself. Then, after the addiction issue, trying to get clean and sober, that was a journey.”

Buckley said she started Seeds of Hope to help people who are dealing with the same problems, people who are often alienated by society because they’re struggling with addiction or mental health problems. Often, these people become stuck in a cycle of addiction, imprisonment and lapsed recovery because they’ve been deprived of basic life skills, which is something Buckley tries to teach them.

“(Recovery programs) forget you have to go out in the world and live,” Buckley said. “If you’ve come out of jail or prison into recovery, and you’ve been doing this for so long, you know, drugs and alcohol or whatever it is, you need to have somebody help you open the blind or so that you can see and feel comfortable in life.”

Buckley tries to help wherever and whenever she can, providing housing and work opportunities to the struggling people she encounters. Many of them end up working at the eatery for a time, creating a lasting bond with Buckley through their shared experiences of pain, loss and a renewed sense of hope.

With tears brimming in her eyes, Buckley said the hardest aspect of what she does is when she has to remove someone from the rehab facility or housing because they’re continuing to abuse drugs.

“We love them still when we put them out,” Buckley said. “And a lot of them probably don't have nice things to say about me when I put them out.

“And so that's one of the things that is really challenging about it because sometimes I love them more, maybe than they love themselves, right?”

Brenda Andres and Stefani Robertson, employees at Buttery Shelf who’ve worked with Cherrie for more than a decade, take pride in the charitable work they do at the eatery and the food pantries they help run. Robertson, smiling, said lending a helping hand to disenfranchised people is a huge factor in that pride.

“I guess we go above and beyond what most restaurants do, not that we want to throw anybody under the bus like that,” Robertson said. "But yeah, I mean, we serve most of the people that aren't normally welcomed in most places, such as the homeless or the displaced.”

Buckley is selfless, Andres said, and her commitment is resolute.

“I think a lot of people in the community don't realize the size of the homeless and financially stressed population that we have in this community,” Andres said. "But Cherrie has been aware of it for a very long time and has been working to try to mend some of the ills in the community.

“But, obviously, every day there's another person or persons with needs, it’s never-ending. Yeah, she's (Cherrie) not going anywhere.”

Buckley doesn't want recognition for what she does. She doesn't even like having her photo taken because she doesn't want those she's helped to feel any obligations toward her.

She operates as the main chef at the eatery, which is in its third week open after only offering catering during the past year because of COVID-19. The menu typically rotates a variety of soups, sandwiches and salads.

The eatery itself has withstood the test of time. When Buckley broke ground on the restaurant 20 years ago, she’d open shop on Thursdays specifically to provide free meals for homeless people, who’d be invited to dine and enjoy a normal restaurant experience.

She said the city shut down that practice after neighbors complained.

But that didn’t stop the eatery’s customer base from slowly growing into a reliable group of regulars, her daughter Anna said, which has since been affected by COVID-19.

“It took quite a while with our limited hours and kind of word of mouth to build up a really great bunch of customers that we would see pretty frequently,” Anna said. “We've struggled with trying to come back and feel safe, and feel safe for our customers.”

A limited menu and the use of to-go boxes for both takeout and inside dining are a couple of the precautionary measures Anna and Cherrie have taken since the return to normal business hours, which run Thursday to Saturday from 11:30 a.m. to 2 p.m. A slow trickle of familiar faces have shown up since the return, and they were welcomed back by the Buckleys with love, hugs and free meals.

That sense of gratitude and kindness emanates throughout the eatery. Its confines are small, with a dining area that spans three rooms, but it feels cozy because of the old-fashioned wood furniture and friendly staff.

The eatery’s colonial aesthetic is apparent: portraits of Charles II of England and Henry, Duke of Gloucester, line the walls, and the wood-plank floors creak when patrons stand and move. Early colonial captain’s chairs sit in the corners of the two front rooms, which each holds a fireplace and an assortment of candelabras, pewter goblets and silver plates.

The colonial theme was Cherrie’s idea, Anna said. It came from her love of colonial Williamsburg, Virginia, which is about an hour drive from Surry County, where Cherrie owns two houses, one built in 1698 and the other built in 1702.

Cherrie said the 1698 house is haunted. She met the ghost, the wife of a fallen Revolutionary War soldier, one night while preparing for bed.

“Oh my gosh, she sat on the bed with me and patted me,” Cherrie said. “I was there with my dog and I’m sleeping sideways on the bed with all the lights on in every room. I was not ready for that.”

The eatery’s menu is often inspired by colonial recipes. Anna said the eatery first gained acclaim because of its French onion soup, which they served at a booth during the Feast of the Hunter’s Moon every year. They also make stone soups that are consistent with the period.

Though the French onion soup was missing from the menu Friday afternoon, a French dip was available, along with a couple of other soups and sandwiches. The eatery only had two guests then, but they filled the room with chatter and laughter as they talked with Robertson and Andres.

Cherrie sat at one of the tables, deep in conversation with a patron. There was emotion in her voice as they talked.

Cherrie gave the woman a big hug before scurrying off to the kitchen to make more meals.