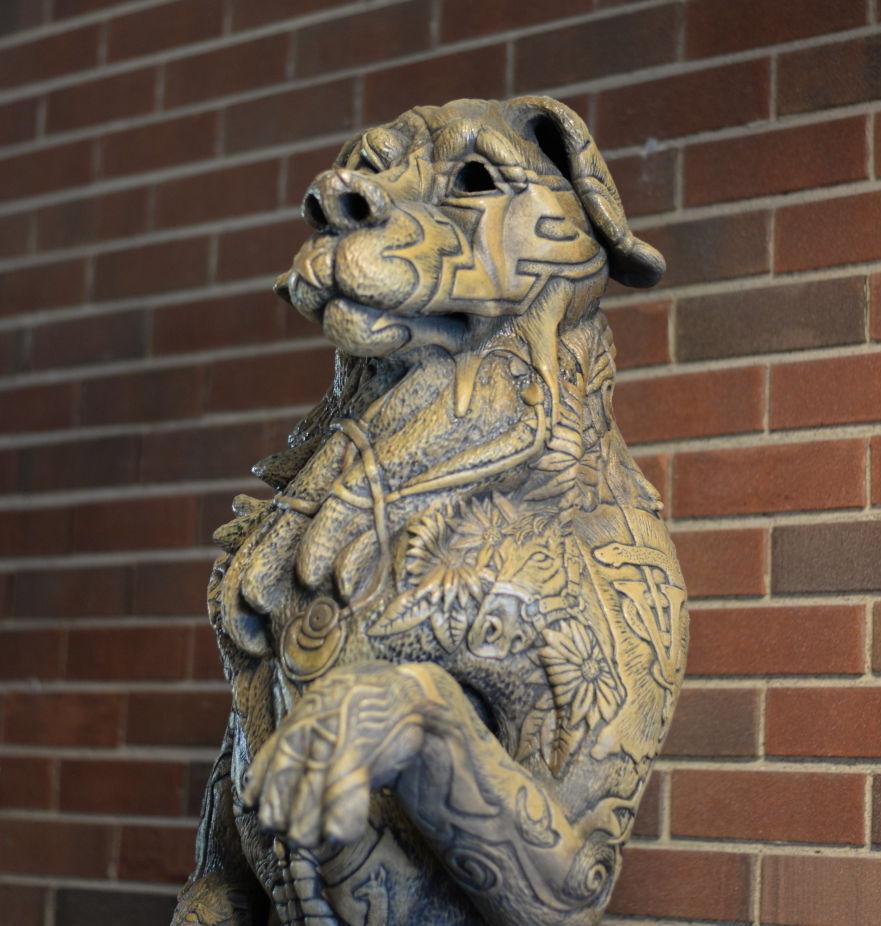 Lynn Hall is home to the “From Hand to Paw” statue, which features engravings of animals and symbols of Purdue. 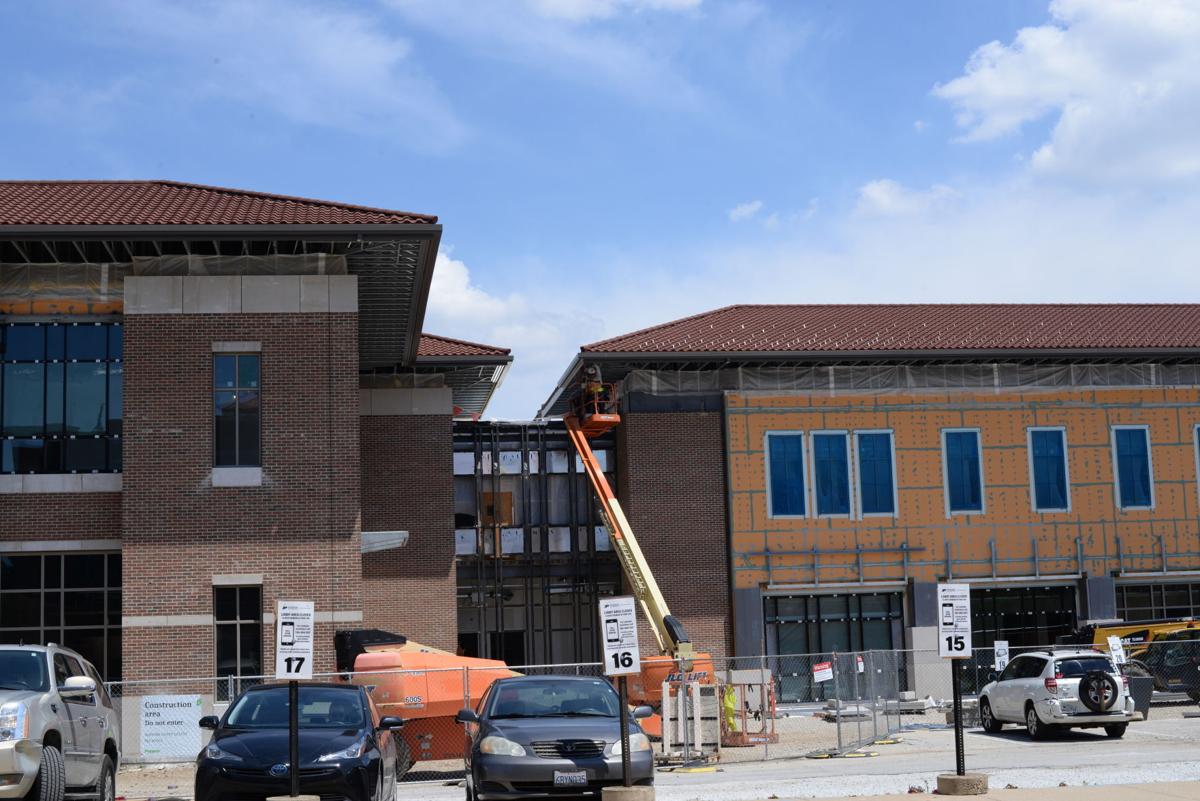 The new veterinary school is next to Lynn Hall and began construction in February 2020 — it is scheduled to open spring 2022. 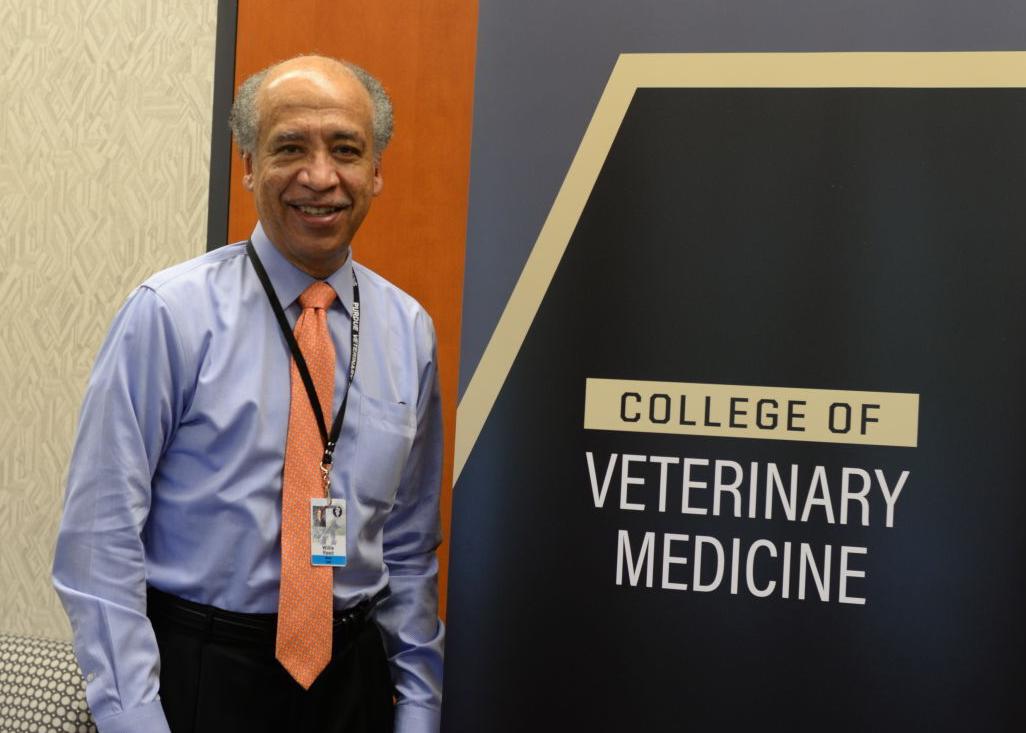 Dean Willie Reed has been in charge of Purdue’s veterinary school for 15 years. 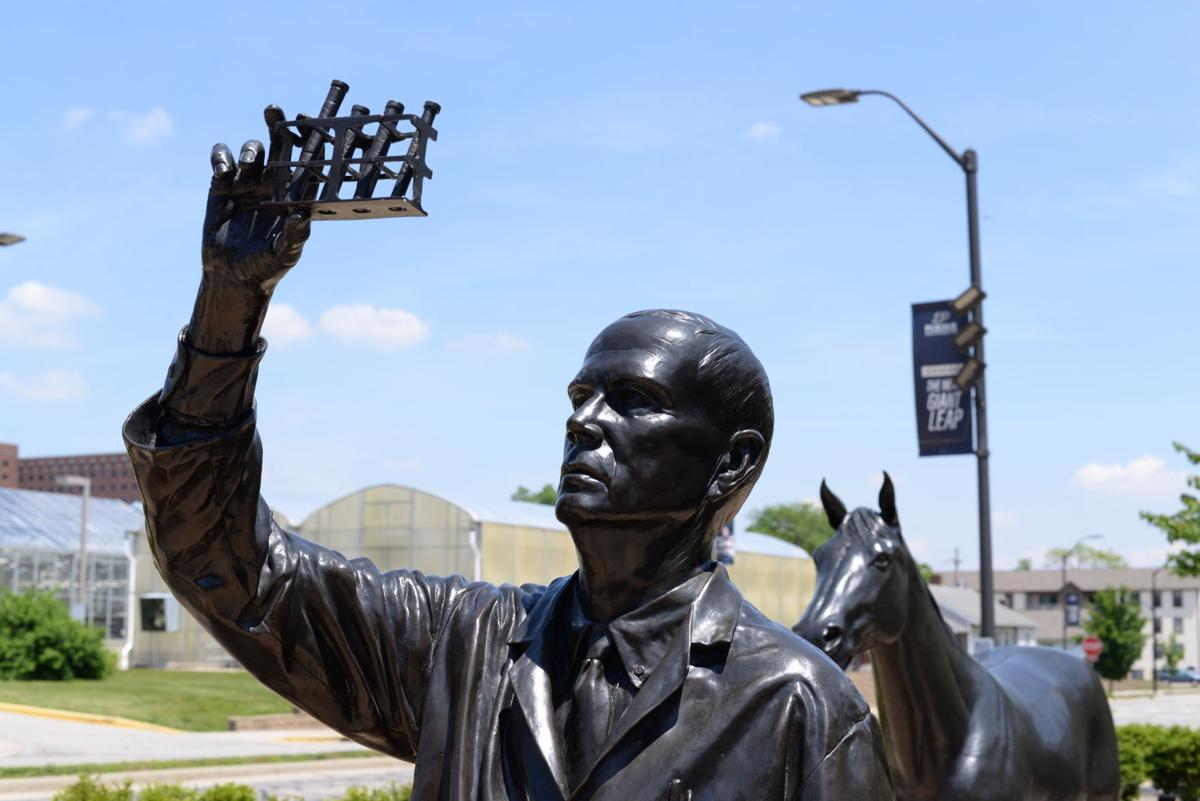 The art installation “Continuum” is a collection of bronze sculptures depicting the relationship between humans and animals. The sculptures are placed outside of Purdue’s veterinarian school inside of Lynn Hall.

Lynn Hall is home to the “From Hand to Paw” statue, which features engravings of animals and symbols of Purdue.

The new veterinary school is next to Lynn Hall and began construction in February 2020 — it is scheduled to open spring 2022.

Dean Willie Reed has been in charge of Purdue’s veterinary school for 15 years.

The art installation “Continuum” is a collection of bronze sculptures depicting the relationship between humans and animals. The sculptures are placed outside of Purdue’s veterinarian school inside of Lynn Hall.

The demand for veterinarians is growing at four times the national average job growth rate, according to the Bureau of Labor Statistics.

But despite having equivalent or greater training and education than a typical medical doctor, veterinarians on average make half as much money as human doctors do.

Increased demand and fewer professionals to meet it — a vicious cycle that leaves pet owners with an ever-increasing bill.

Kalei Hash is a recent graduate from Purdue with a degree in pre-veterinary medicine, and she intends on becoming a full veterinarian. She was also the president of the Purdue Pre-Veterinary Medicine Association.

Hash has spent four years studying at Purdue and three years volunteering at veterinary clinics at Purdue and in her home town of Bloomington.

When at work or volunteering, Hash was always busy. “Phones were ringing off the hook — they had to install an entirely new voicemail system, and one of my jobs was going through all of the voicemails,” Hash said.

“There were a lot of days where we didn’t get lunch,” Hash said, “you would eat for five minutes then move on.”

A lack of veterinarians in all fields has been a growing issue for the past several years years. Small animal care has taken a hit, but the shortage has propagated to all areas of veterinary medicine such as exotic animal care and large animal care, which keeps food producing animals healthy.

Hash said that the shortage isn’t just veterinarians, but rather it’s the industry as a whole.

Purdue’s Dean of Veterinary Medicine, Willie Reed, weighed in on the veterinarian shortage in May.

“The demand for veterinary services has increased significantly,” Reed said, “pet ownership is up, and just look at what happened during the pandemic.”

“And this is just for companion animals,” he said.

Over the past five years, the Purdue veterinary medicine school had a graduating class size of about 80 students — hardly enough to meet the demand, Reed said.

And with the retirement of many established veterinarians, the pet health vacuum is growing.

Without an adequate number of staff members, veterinarians often end up experiencing burnout — a state of emotional and physical exhaustion.

One way to alleviate the shortage is to train more veterinarians, which is the route Purdue has opted for.

Purdue Board of Trustees members authorized a plan in 2017 to build a 76,600 square foot addition to the current Purdue animal hospital; construction began in February 2020.

With the addition, the department of veterinary medicine says on its website that “the new Purdue University Veterinary Hospital facilities are designed for a class exceeding 100 students.”

Despite the increase in class size, competition is still incredibly fierce.

Even Purdue’s Doctorate of Veterinary Medicine application statistics page says that enrollment “is limited and competitive.”

John Kubisz, a local veterinarian with more than 50 years of experience and a Purdue graduate, said he believes that the criteria for admission to a veterinary school should be more holistic, instead of being focused on grades.

“I wasn’t the greatest student in the world,” Kubisz said. “I made it in in two years, but that’s expected because one (bad) grade, and I’d have been thrown out.”

For both the class of 2023 and 2024 enrollment for a Doctorate of Veterinary Medicine, not one cumulative GPA was less than 3.1, which roughly equates to a B average.

Along with exclusive admissions, payment for service is a challenge for veterinarians.

“Veterinary professionals need to be compensated for the work they do,” Hash said. “The salaries practices are willing to pay don’t really match the work that’s involved.”

But, of course, an increase in compensation would be directly pushed onto the customer. This creates a turbulent balance act of quality care and affordable, speedy procedures.

“When you have an emergency and your pet needs to be seen immediately, but the veterinarian says ‘we can get you in in August,’ that’s a problem if it’s June,” Hash said.

Without quick appointment scheduling times, customer satisfaction immediately suffers. As a result, veterinarians become more stressed, and a cycle of being overworked ends up increasing burnout.

Burnout is a common phenomenon in the medical field, and is not uncommon in veterinary medicine; in some cases it can have a significant effect on the veterinarian.

But showing patience can go a long way, Hash said, “Even the average person can help by being kind to their veterinarian.”