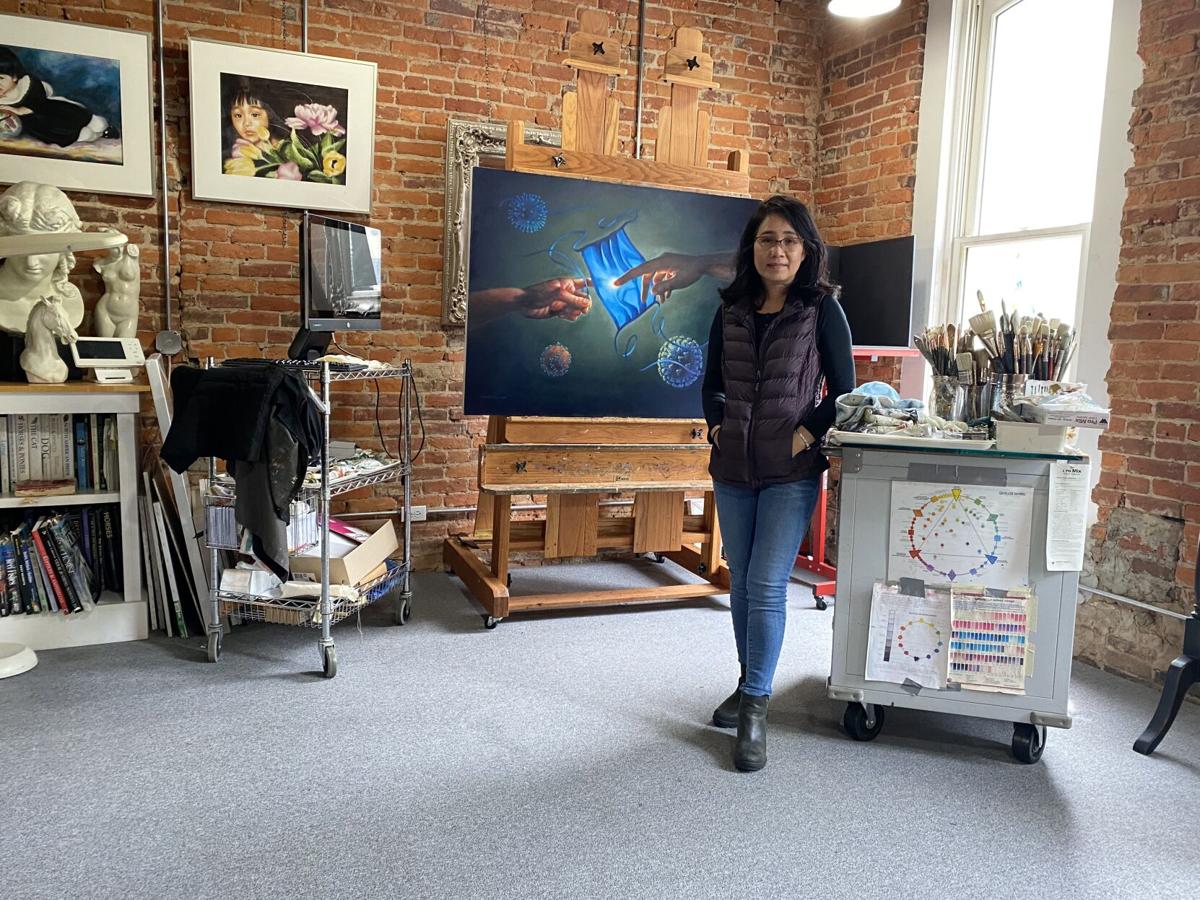 Kimlien Tran poses in front of her COVID-19-inspired oil painting. 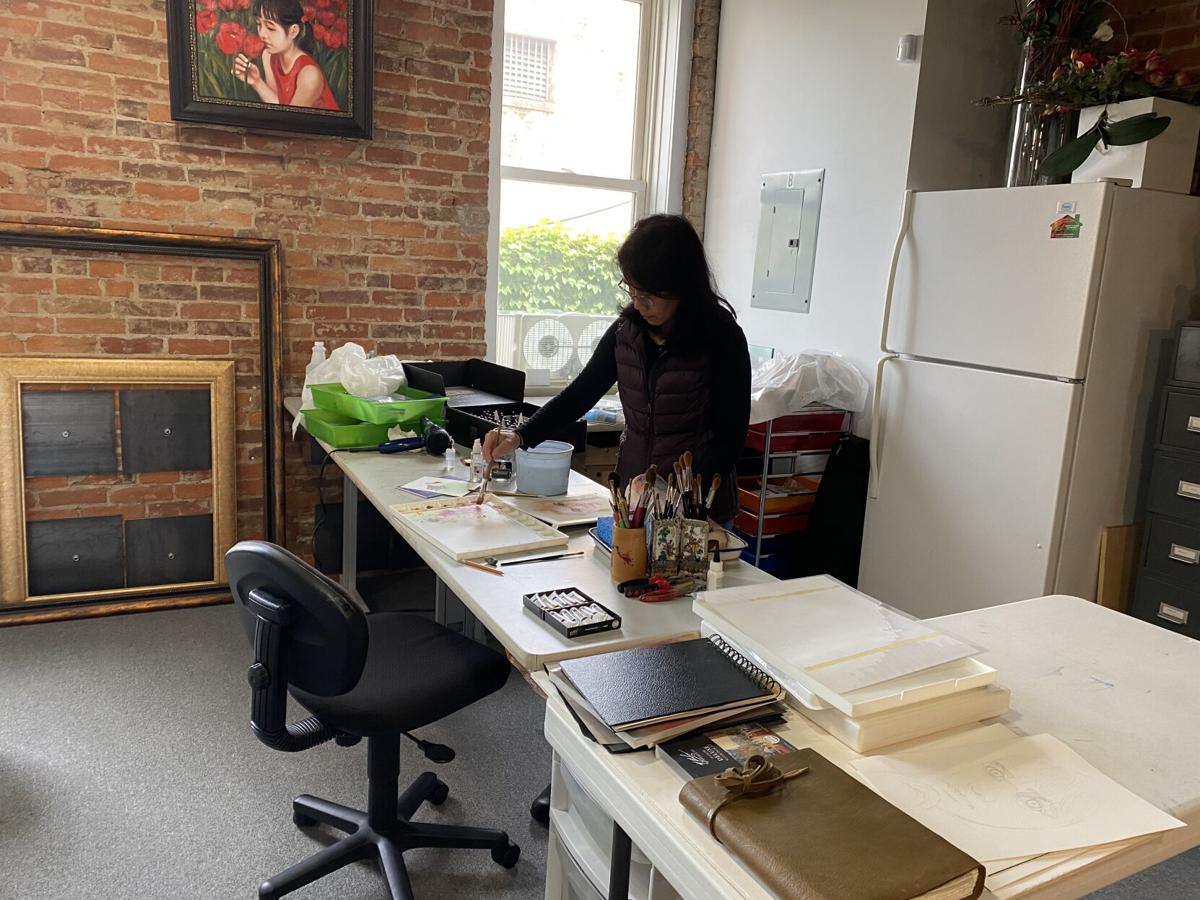 Kimlien Tran drafting a sketch for a commission she's working on. 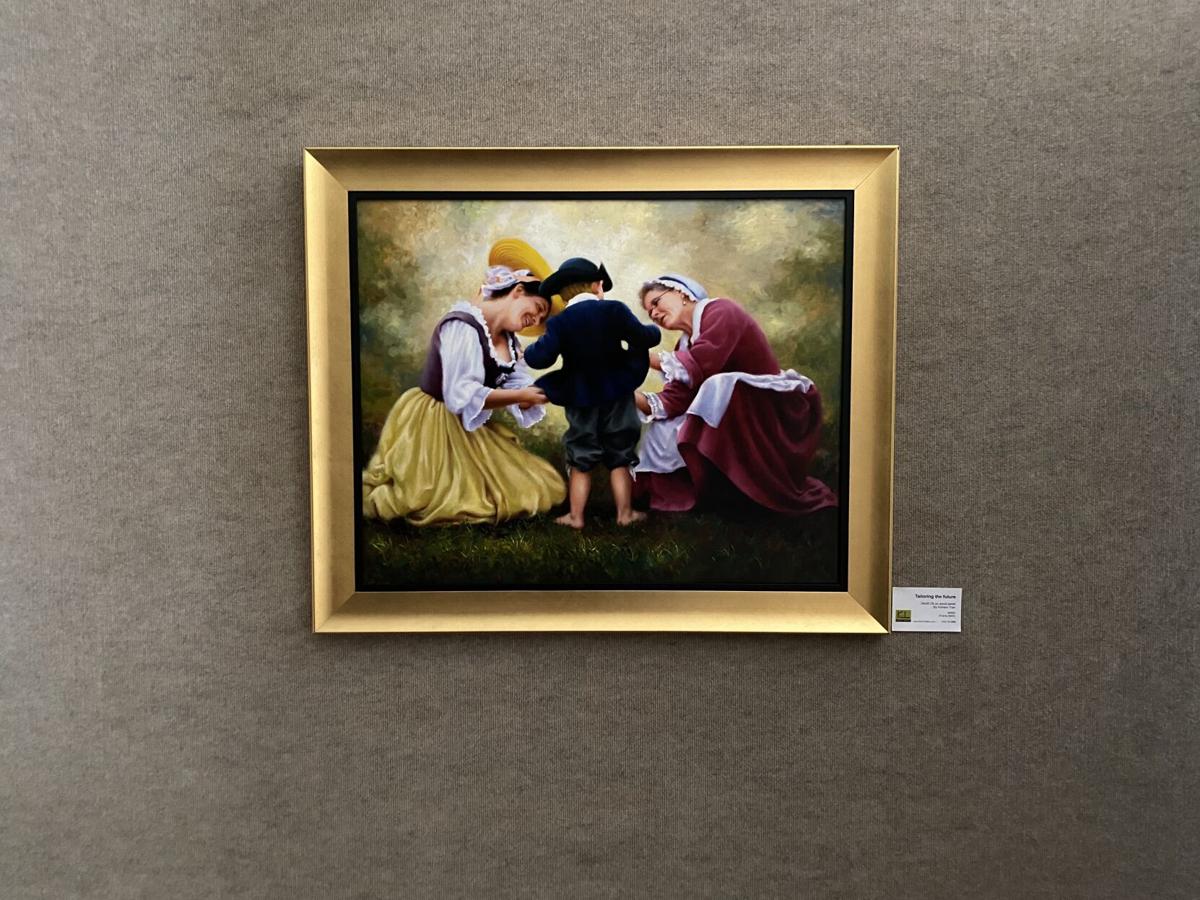 'Tailoring the Future' by Kimlien Tran. 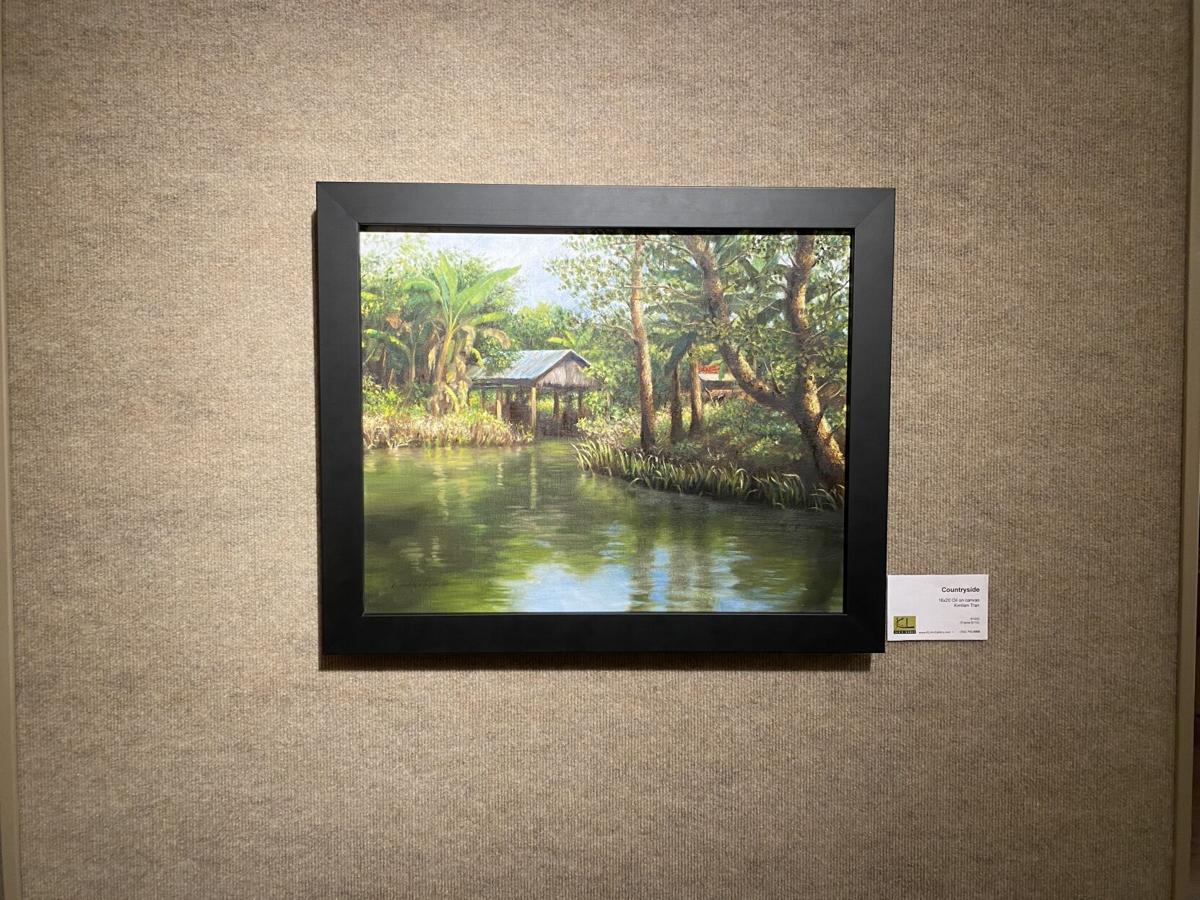 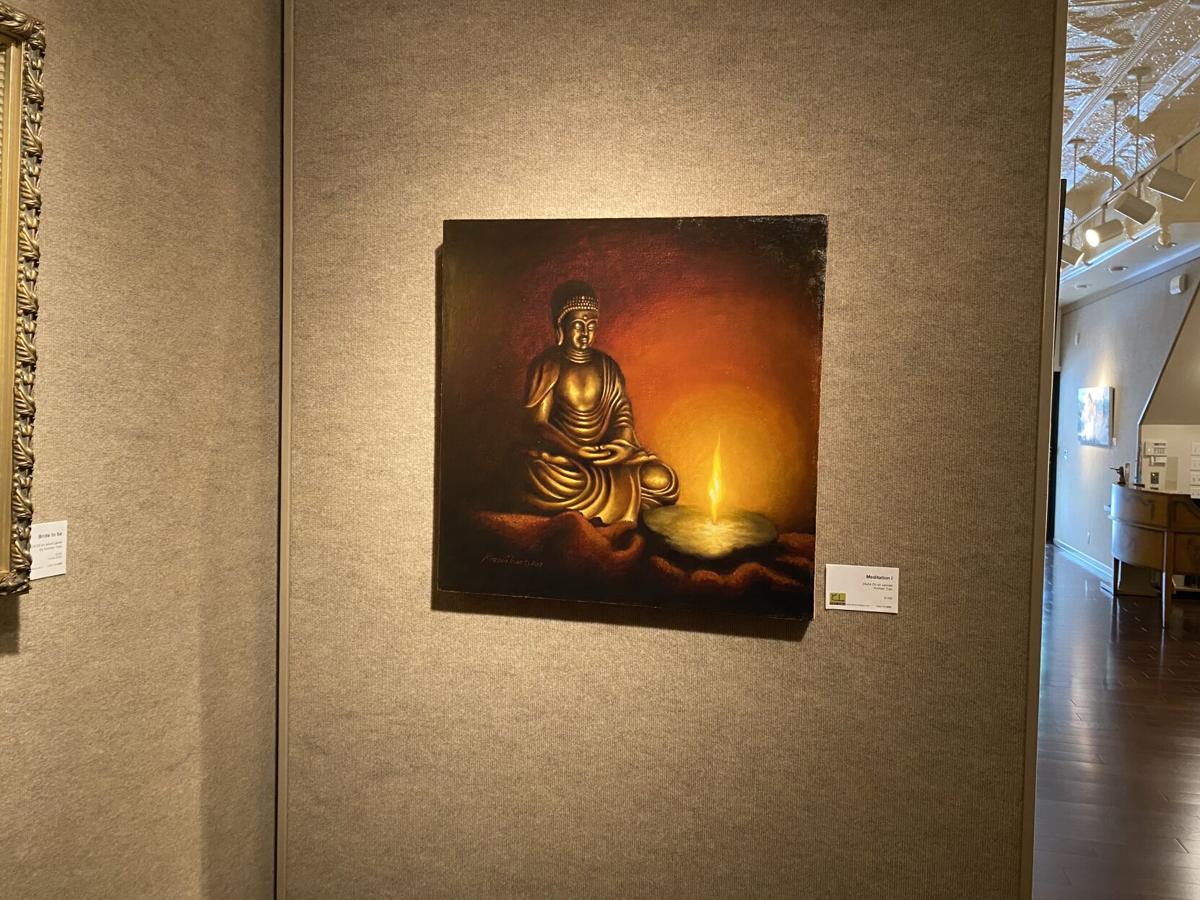 'Meditation III' by Kimlien Tran on display in the KL Gallery.

Kimlien Tran poses in front of her COVID-19-inspired oil painting.

Kimlien Tran drafting a sketch for a commission she's working on.

'Tailoring the Future' by Kimlien Tran.

'Meditation III' by Kimlien Tran on display in the KL Gallery.

Kimlien Tran’s father did not want her to become an artist.

“Artists are starving,” he’d tell her. “You need to go to university and learn something.”

So Tran attended the University of Washington and majored in chemical engineering. Her dream of becoming a painter would have to wait.

But then she met her future husband, Khoa Lai, a fellow UW student studying medicine, who encouraged her to pursue a career in art. He told Tran to follow her dream and he’d support her.

She took his word for it and started practicing painting styles. Watercolor came first. Oil and pastel followed. Tran had the same process for each medium: rent a few library books on the subject, comb through them, and practice.

Whenever Tran, Lai and their two children, Alexander and Vivienne, would travel, they’d visit an art museum. MoMA in New York City. The National Museum in Washington, D.C. The Louvre in Paris. Tran would see the beauty in the brushstrokes of the Rembrandts and Van Goghs and wonder how they were made.

“I look at the art, and I go home, and I think, ‘How could they do it so beautifully?’” Tran said. “And then I just tried to read the books and understand how they did it.”

Tran emigrated to the United States in 1980 after she and her family fled from Vietnam when she was 14. She grew up in the capital of South Vietnam, Saigon - now Ho Chi Minh City - with nine brothers and sisters, and she watched helplessly as the communist North Vietnam Army invaded and took over the city, and the country, in 1975.

Her father and two oldest siblings fled to the United States that same year, and Tran, her mother, and the rest of her siblings followed in 1980. They traveled in an overcrowded dinghy to a refugee camp in Malaysia, where they had to scuttle their boat so they wouldn’t be sent away.

“I was one of those boat people,” Tran said. “And we got robbed, I mean, we saw pirates and everything.”

They stayed at the camp for a few months before moving to the United States, to the state of Washington. Tran struggled learning English, a process she says eventually aided her art comprehension.

“I chose chemical engineering (as a major) because it’s a science, it required little English,” Tran said. “I had a problem understanding the professor, so I’d read the books and try to understand them.

“That process helped me very well with art. You can just read art instructions, it’s all right there.”

Tran said she’s always struggled with language but is a visual learner. This aids her in her painting process, because she can picture her creations in her head and map out a plan for how to put it on the canvas.

The family moved to Indiana after Lai accepted a medical fellowship in Indianapolis.

She opened her art gallery, the KL Gallery, on North 4th Street in downtown Lafayette in 2004. After this, she said, she started painting more aggressively, taking on commissions and exploring the boundaries of her artistic prowess.

She has more than 300 finished pieces at the gallery in a variety of mediums: watercolor, oil, charcoal, pencil, pastel. The art itself is often impressionistic and reflective of real life, ranging from a portrait of a whistle maker at work to a still life of a Thanksgiving cornucopia.

Tran prefers realism over painting abstracts, but when COVID-19 hit, Khoa persuaded her to lose herself and try to create something from pure imagination that wasn’t based on an existing image.

Feeling isolated from her faith because her church was closed, Tran, a Catholic, came up with the idea to create an oil painting that encapsulated how she was feeling during the pandemic.

The result was an abstract painting that showed Tran’s reverence for Renaissance-style art as well as her unusual use of light. The painting illustrates two hands reaching out to each other - a la Michelangelo’s "Creation" - across a black background populated by orange and blue virus globules and touching at a contact point in the center, where a cloth mask separates them and emanates a powerful orb of light.

Tran described her thought process for the painting as one that wasn’t typical for her, given its abstract nature. She felt that during the pandemic, her connection to God, to her faith, was both connected and disconnected, and she used the image of the mask as a touchstone for that feeling.

“Humans are kind’ve not wanting to wear a mask, so it’s very flimsy,” Tran said. “But here, with the touch of God, there’s hope.”

Tran started by drawing out rough sketches of the idea in her notebook. Because she needs to be looking at something to paint it, she used a mannequin she keeps in her practice studio as a model for the hands.

She then sketched it out in oil paint on a black canvas background, but she didn’t like the black, so she switched to green. The final version draws the viewer’s eyes to the center of the canvas, where the bright white orb of light created by God and humankind’s connection makes the mask’s blue color pop.

The use of color is a significant theme in Tran’s work. Tran said her use of color theory and its association with light is what gives her paintings their distinct look.

Color theory, Tran said, involves understanding how different colors interact with each other to communicate a feeling or emotion to the viewer. Vivid colors like red and orange pop out and catch the eye, while blues and greens blend into the background.

Tran implements color theory to help her make light pop out on the canvas.

“In my paintings, I try to focus on the light,” Tran said. “Because where there is light, there is color.”

Most artists don’t believe they’re born with the ability to paint or draw, Tran said. She thinks otherwise.

“It always just seemed like I could just pick up a pencil and look at you, and draw you,” Tran said.

Lai, who’s watched Tran’s ability progress over the last 20 years, said her ability is a combination of her natural talent and hard work.

“Since I met her for the very first time, I knew she had this God-given talent, that she was born with it,” Khoa said. “She had to develop it or it would be wasted, so I was very happy that she found a place that she can express herself.

“It’s like (her ability grew) exponentially, from just sitting, doodling at home with ink pens and pencils to oil, as she can now understand what to do, she can draw all mediums. It’s amazing.”

Tran is not the only artistic talent in the family. She said two of her brothers could paint and draw as well, but they couldn’t focus on it as much because they had other careers.

Her son, Alexander, a graduate student at Northwestern University, has the knack, too. Tran said he dabbled with painting in high school but is practicing more now that he’s taking an art class at Northwestern.

His style is different than hers, she said. It’s much more abstract. But the talent is evident.