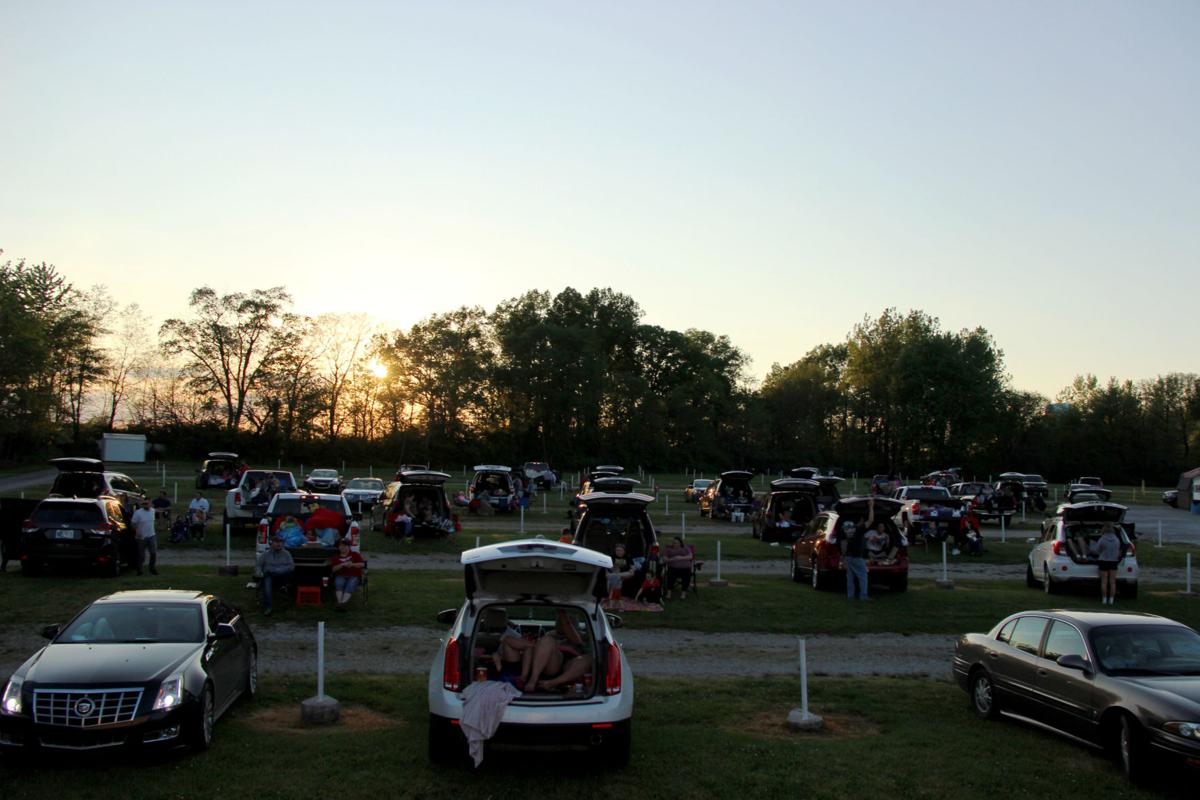 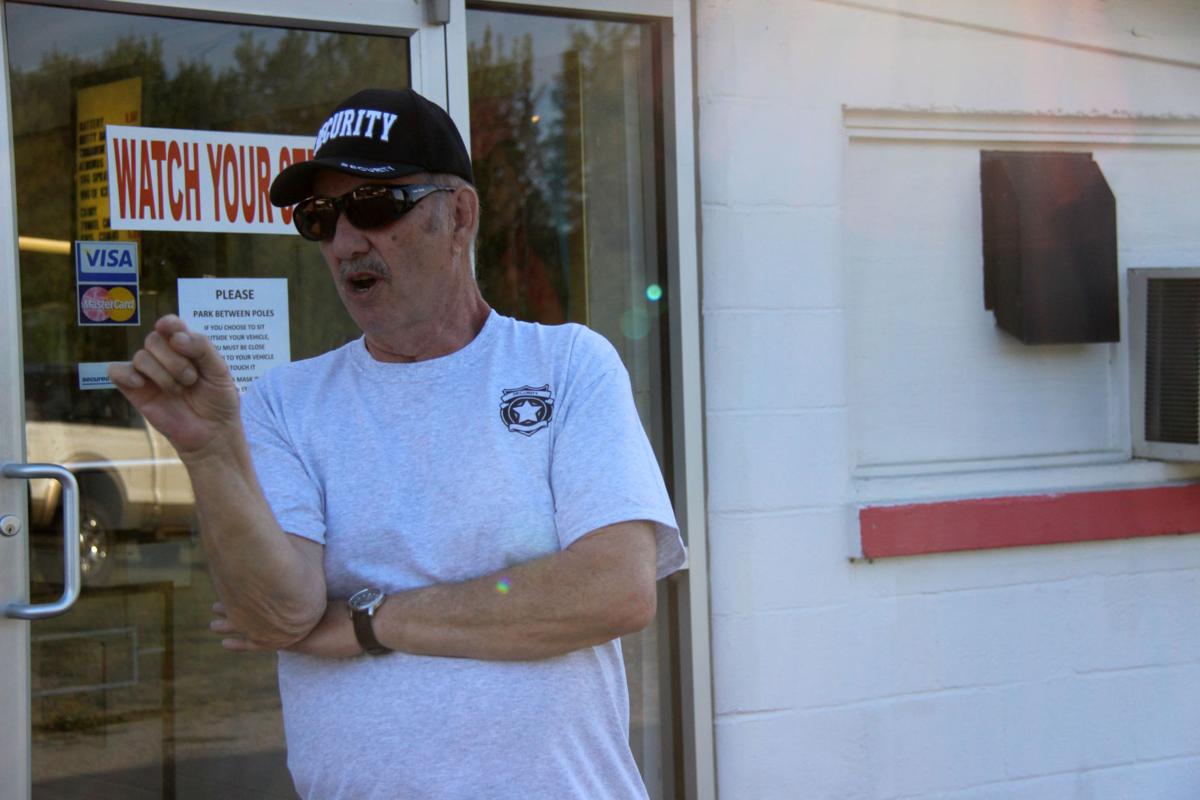 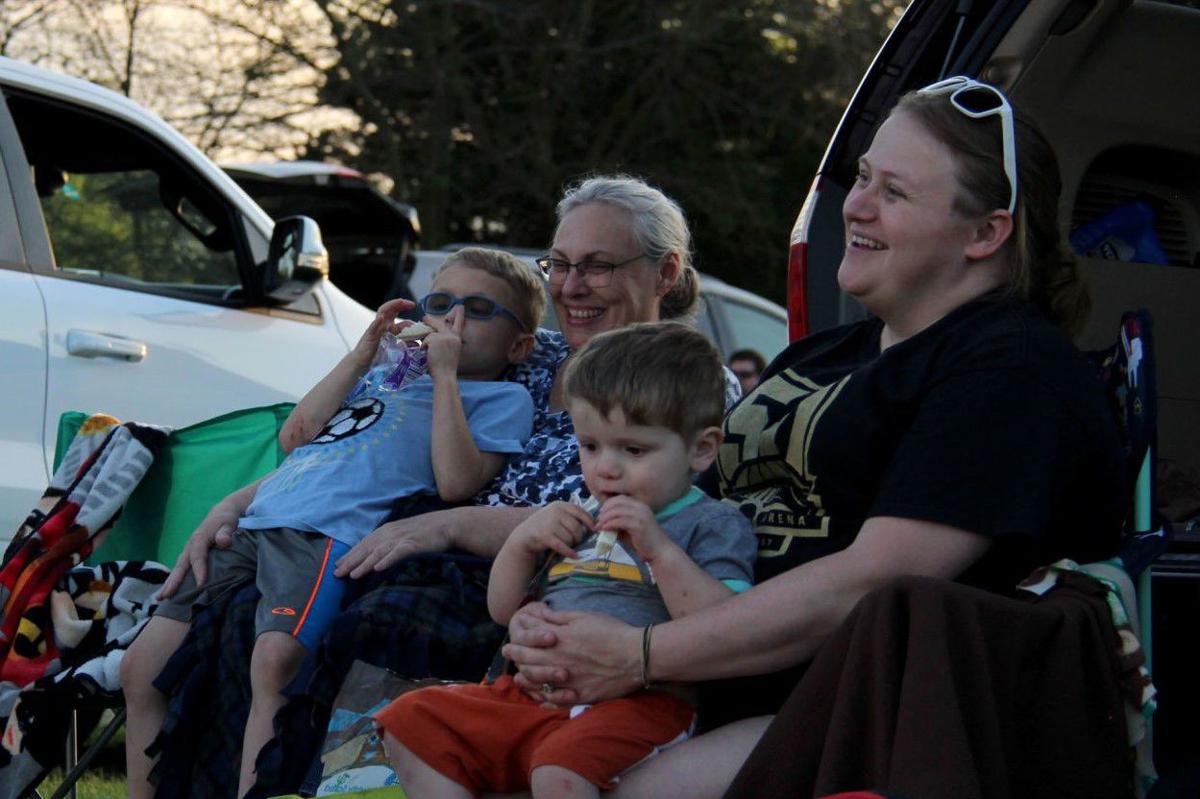 Donna Yater, left, and Jen Yater-Puetz sit with Yater-Puetz's kids outside their car at Lake Shore Drive-In Friday night. They say this is only their second outing as a family since the start of the crisis. 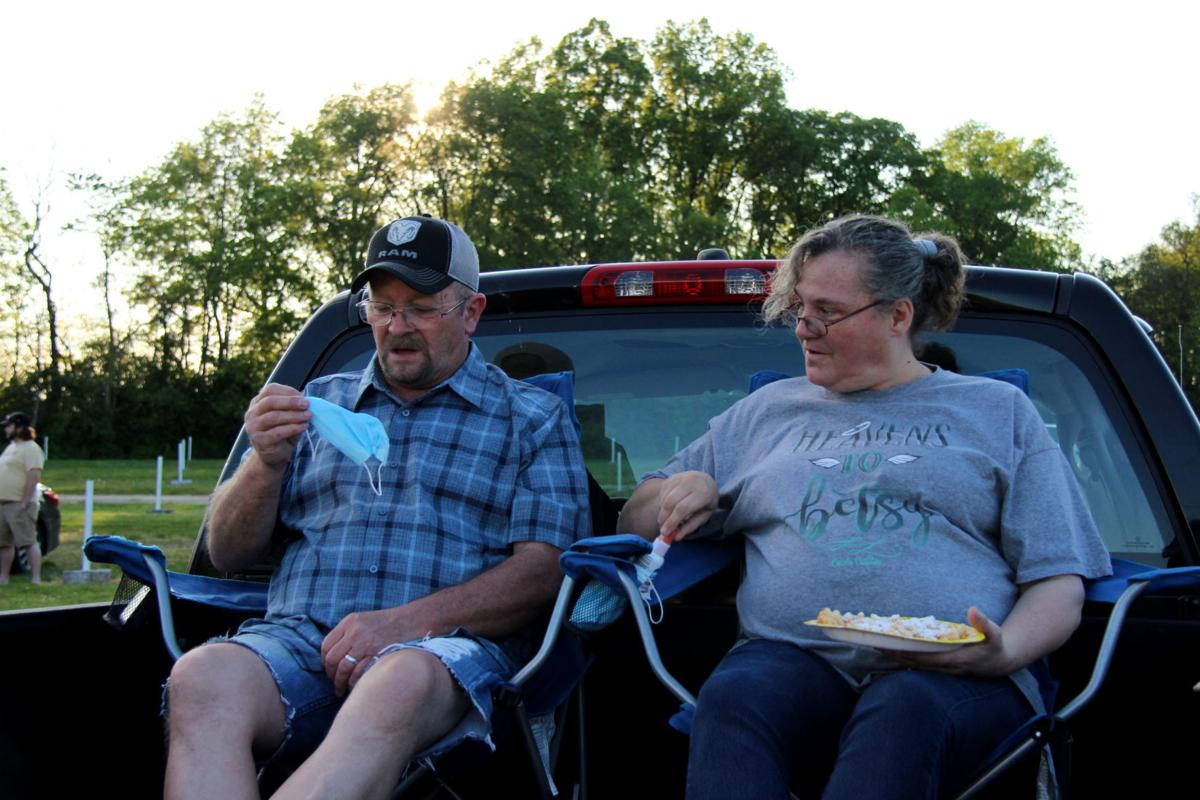 Cass County resident Marvin Tharp, 60, shows off the type of mask, along with gloves and hand sanitizer, he and his wife, Tracey, keep in both of their vehicles at all times.

Donna Yater, left, and Jen Yater-Puetz sit with Yater-Puetz's kids outside their car at Lake Shore Drive-In Friday night. They say this is only their second outing as a family since the start of the crisis.

Cass County resident Marvin Tharp, 60, shows off the type of mask, along with gloves and hand sanitizer, he and his wife, Tracey, keep in both of their vehicles at all times.

MONTICELLO, Ind. — As Indiana opened up a little bit more on Friday, Lake Shore Drive-In Theatre offered the chance for families to relax together for the first time in a while.

“We only lost about six days of business, so we did pretty good,” McLachlan said.

McLachlan knows many people may feel that going to the drive-in is “kind of dangerous” right now, but he assures that Lake Shore's top priority is the safety of its guests.

Guests aren’t required to wear masks, but all the drive-in’s employees are. The concession stand has removed the ability for guests to serve themselves food, and the floor is lined with 6 foot indicators. McLachlan says they had no issues with guests not following social distancing guidelines last weekend.

Lake Shore Drive-In, which seemed to have plenty of empty space Friday night, is also regulating how far movie-goers can sit when watching their movies.

“If (guests) want to get out of the car to sit in a chair, they have to be close enough to the car that they can touch it,” McLachlan explains. “We also used to fit two cars in between the posts, but now it’s one car per spot.”

McLachlan says he’s heard a lot of comments from not just Monticello residents, but also other Hoosiers who were ready for the theater to open.

The Yater family says Friday was the first time they’ve been out to “actually do something” in quite a while. Donna Yater says the theater outing was the second time she’s been able to spend quality time with her grandchildren — the first being her 59th birthday celebration last week.

“I didn’t see my grandchildren physically for six weeks,” Yater says. Even though she and her grandchildren talked and played games virtually during Indiana’s stay-at-home order, she says, “(it) was hard to be away from them because I’m very involved.”

“We read up on what we would need to be prepared,” she said, “so we brought masks and wipes and all that.” Yater-Puetz says she takes the same measures everywhere she goes to protect her family from infection.

For one couple, going to the drive-in is a relaxing start to the end of a hard work week.

Madison Rohlman and Rian Kerst, an engaged couple in their mid-20s who moved to Monticello just a year ago, say they commute to Lafayette for work every day.

And they continued to do so throughout the crisis.

“Well, we’re essential workers,” Kerst says. “I’m a kitchen manager at O’Charley’s and (Rohlman) is a banker.” They say they both take all the recommended precautions and were ready to do so for this trip to the movies.

A couple of regulars were especially excited to see it open for the season. Tracey Tharp, 51, and her husband Marvin, 60, say coming to Lake Shore Drive-In is routine for them.

“Oh, we come every Friday,” Tracey says, “and we didn’t know it was open until I checked on the phone today.” She says they didn’t actually plan on coming Friday night. “We were going to go camping, but all the campgrounds are closed.”

The Tharps live in Walton, Indiana — in Cass County — which won’t be in Stage 3 of Indiana’s “Back on Track” plan until June 1. Cass has the third-highest number of cases among Indiana counties, with more than 1,500 confirmed cases as of Friday.

The Tharps say they take as many precautions as they can to protect themselves.

“The thing is, I’ve got COPD and asthma, and (Marvin) had two surgeries right before all this happened, so in both of our vehicles, we’ve got gloves, we’ve got masks, and we’ve got (hand sanitizer),” Tracey says.

They’re even wary about going to the grocery store and pumping gas, often crossing county lines to do so. “We don’t even want to go into Logansport, so we’ll check to see which counties have the lowest rate, and we’ll go there to do our shopping,” Marvin says.

He says they even double-checked to see if the drive-in was enforcing social distancing before coming, even though they knew they’d be in their truck.

It’s nice to get out of the house, Tracey says, “but we’re still cautious. We will be for a while.”