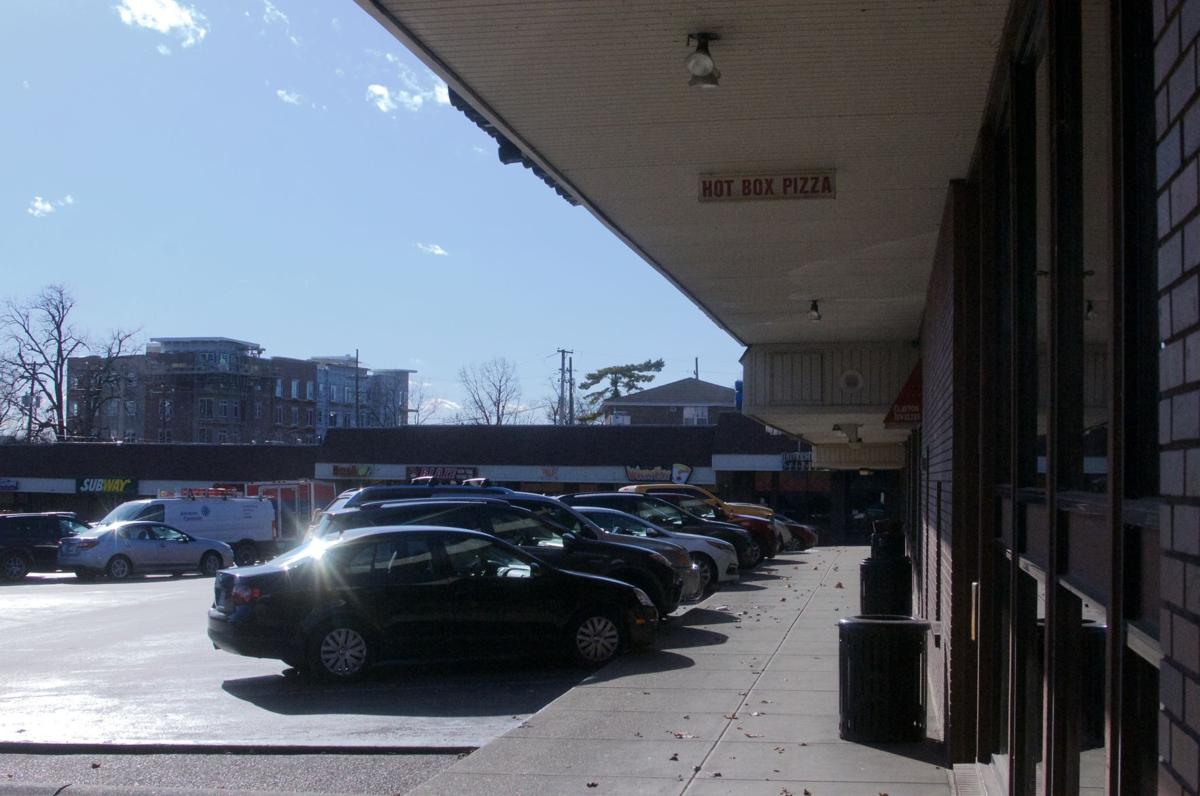 A view of Chauncey Hill Mall from outside of Hot Box Pizza. 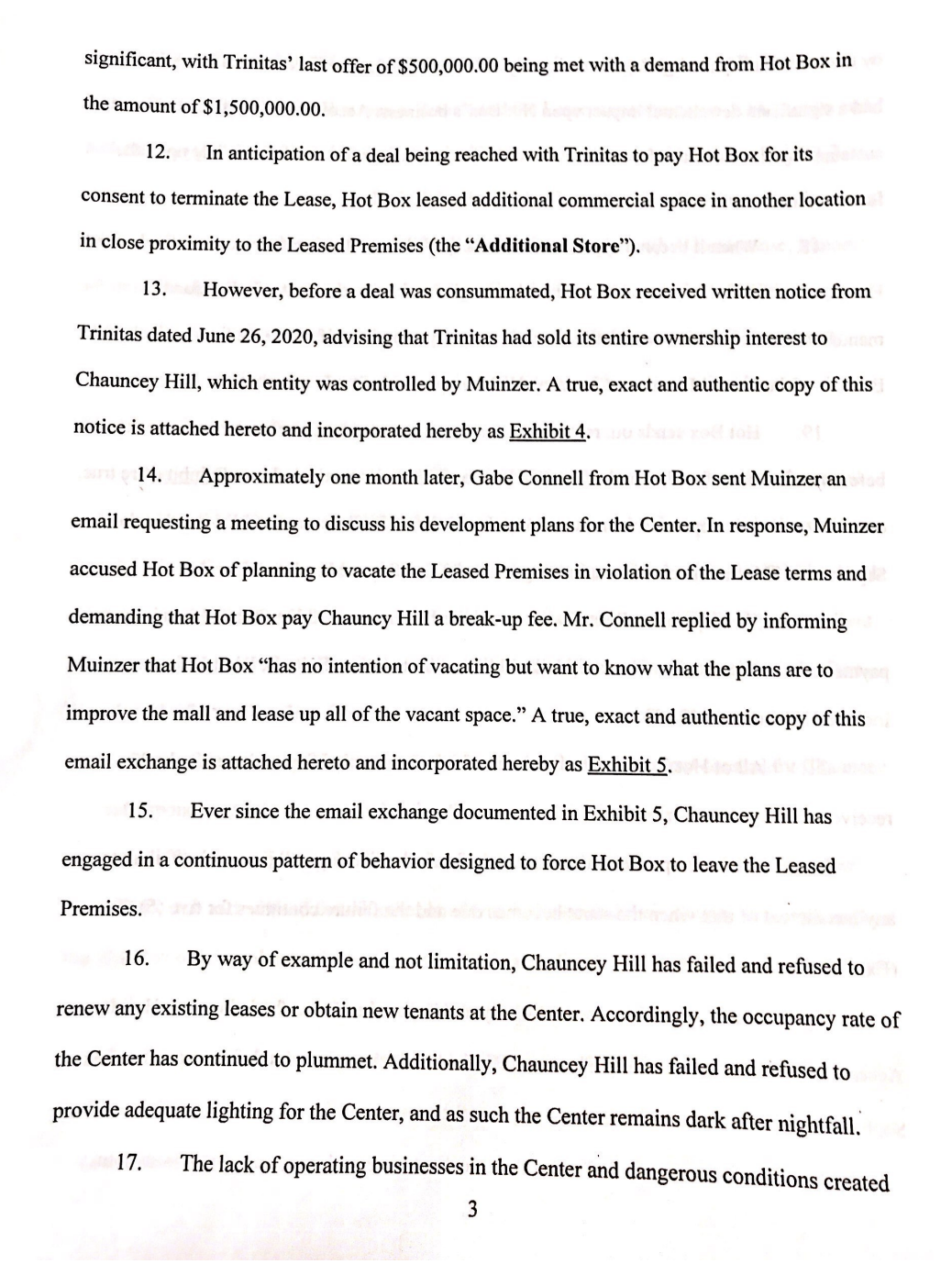 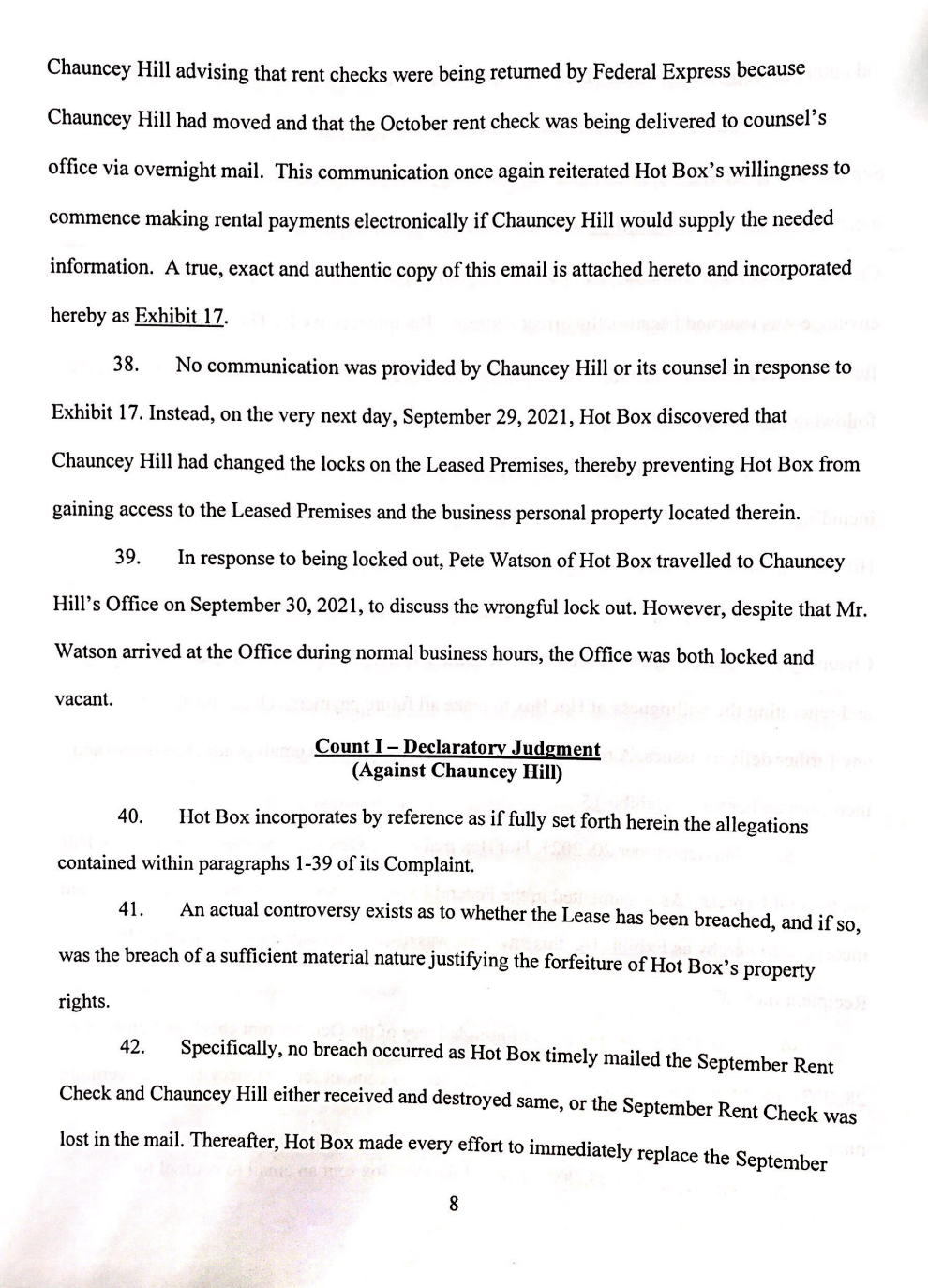 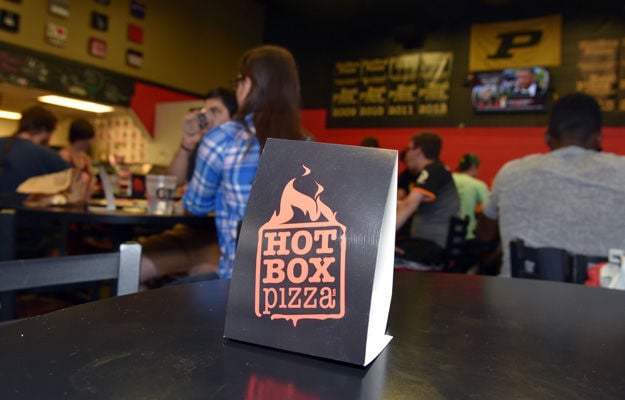 A view of Chauncey Hill Mall from outside of Hot Box Pizza.

Muinzer is facing a lawsuit after he allegedly changed the locks of the Hot Box store front Sept. 29. Chauncey Hill LLP and Muinzer are facing complaints of declaratory judgement, breach of lease and conversion.

Local journalist Dave Bangert recently reported that Muinzer plans to move forward with the proposal to demolish Chauncey Hill Mall and replace it with a high-rise apartment building — apparently against the wishes of of some of the tenants.

"This lawsuit is nothing but a ploy by Gabe Connell and Pete Watson to attempt to extract a large payment from us," Muinzer said in a Friday email. "Of course after we file Draft Plans to redevelop the Mall they sue us hoping for a huge payday."

The lawsuit said Hot Box has had problems with Muinzer since he assumed ownership of Chauncey Hill in June 2020.

"His response (to my initial email asking for redevelopment plans) was, 'The only thing to discuss is how much you'll pay us for breaking your lease,'" Hot Box owner Gabe Connell said in a Friday phone call.

Muinzer accused Hot Box of breaching its lease by trying to vacate the property since it had already begun construction on another property, according to the lawsuit.

Connell said he and co-owner Pete Watson decided to expand to a second location on Vine St. when Muinzer's predecessor, Trinitas Ventures, originally notified Hot Box of Chauncey Hill redevelopment plans in 2017. In case the Hot Box on Chauncey Hill had to either close temporarily for construction or relocate permanently, the owners wanted to make sure they weren't ever without a shop in West Lafayette.

Connell responded to Muinzer saying he had no intention to leave, but he just wanted to know the plans Muinzer had for Chauncey Hill.

From then on, Muinzer didn’t renew the leases for businesses in Chauncey Hill or provide adequate lighting, the lawsuit said. The lack of businesses and “dangerous conditions” significantly reduced foot traffic in the mall, which directly affected Hot Box, it said.

When tenants moved out, they weren't replaced, Connell said. For a while, the only Muinzer ad was for Muinzer apartments and not the available space. When lightbulbs went out, no one replaced them.

Muinzer said this was the first time he was hearing about these problems.

"Hotbox reached out to me exactly zero times regarding lighting complaints," he said.

Connell alleges in the lawsuit when these efforts to "constructively evict" Hot Box failed, the real retaliation began.

“When it became apparent to Chauncey Hill that its attempts to constructively evict Hot Box had failed,” Hot Box said in the lawsuit, “Chauncey Hill switched strategies and made the strategic decision to manufacture a default that would allow it to improperly ... lock Hot Box out of the Leased Premises.

“Chauncey Hill proceeded to do exactly this.”

Near the end of August this year, Hot Box sent its September rent check to Chauncey Hill’s office, the lawsuit alleges. Hot Box allegedly received an email that it was in payment default and its lease had been terminated on Sept. 7.

If a rent payment isn’t paid five days after the start of the month, Hot Box would be in payment default, and the lease would be terminated. Sept. 5 was a Sunday, and Sept. 6 was Labor Day, so the first available day was Sept. 7.

The lawsuit said Connell can prove he sent the rent check because he has the check stub for that payment and the payment sent to the landlord of the other Hot Box location.

Muinzer said in an email he didn’t receive the check, so the lease was terminated, according to the lawsuit. He said he would file for eviction if Connell didn’t surrender the store.

Hot Box’s lawyer then sent a replacement check and a notice of the new check, but Chauncey Hill’s lawyer responded they hadn’t received it. The lawsuit alleges days later, the mailing company used to send the replacement check returned it with the message “Incorrect address — Recipient moved,” according to the lawsuit.

Connell said he was never notified they moved offices.

"Our office did not move," Muinzer said. "It's the same as it's always been. They know it. I know it."

The Hot Box lawyer hand delivered a second replacement to the Chauncey Hill lawyer the next day and offered to pay all future payments electronically, the lawsuit said.

On Sept. 20, Hot Box sent the October rent check, and on Sept. 28 it got the same notice of non-delivery from the mailing company, according to the lawsuit. They then sent a replacement check via overnight mail the same day.

The Hot Box lawyer reached out to the Chauncey Hill lawyer about the difficulties with sending checks but never heard back, the lawsuit said.

When a Hot Box manager went to the store the next day on Sept. 29, they found the locks had been changed, the lawsuit alleges. When staff member Pete Watson went to Chauncey Hill’s office Sept. 30, the office was locked and closed.

Connell said he would be open to leasing space in any new building, but he said when people have occupied a spot for years, the landlord doesn't have the right to kick them out.

"You can't just push tenants around."