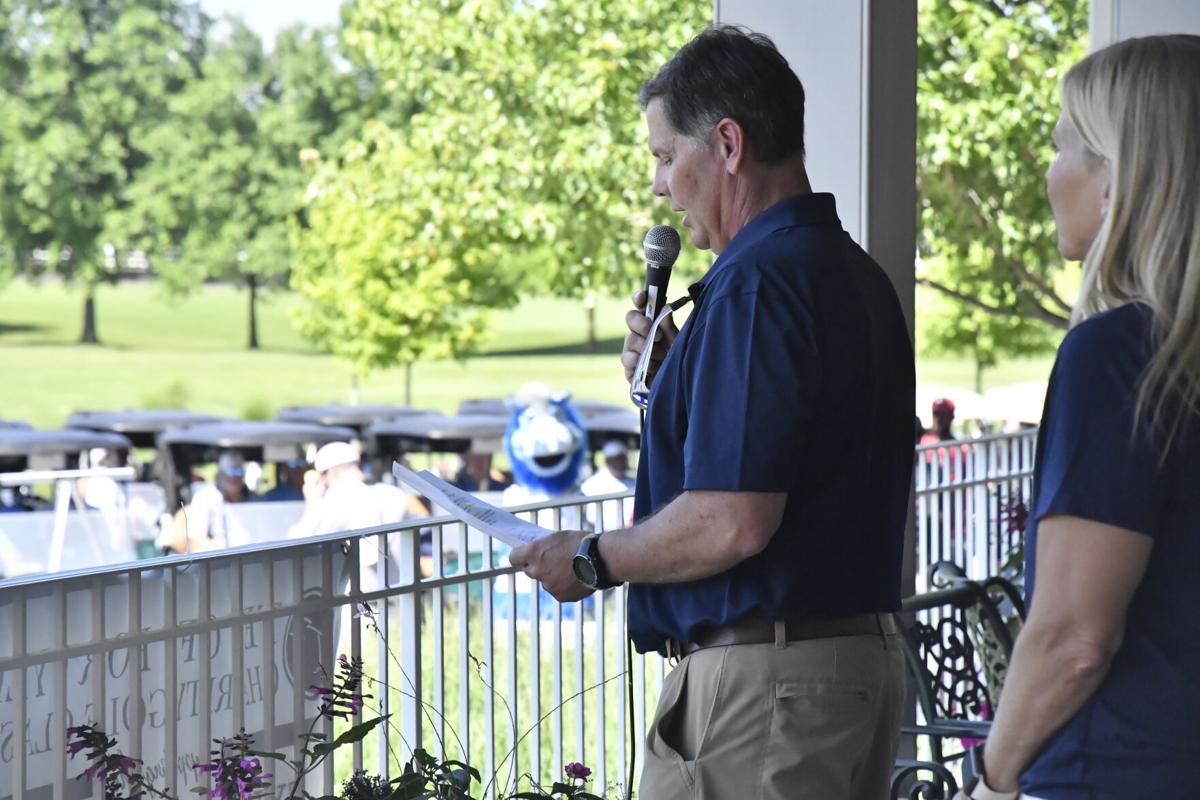 Tony Trent's voice waivers as he asks the golfers to smile for Tyler out on the green that afternoon. 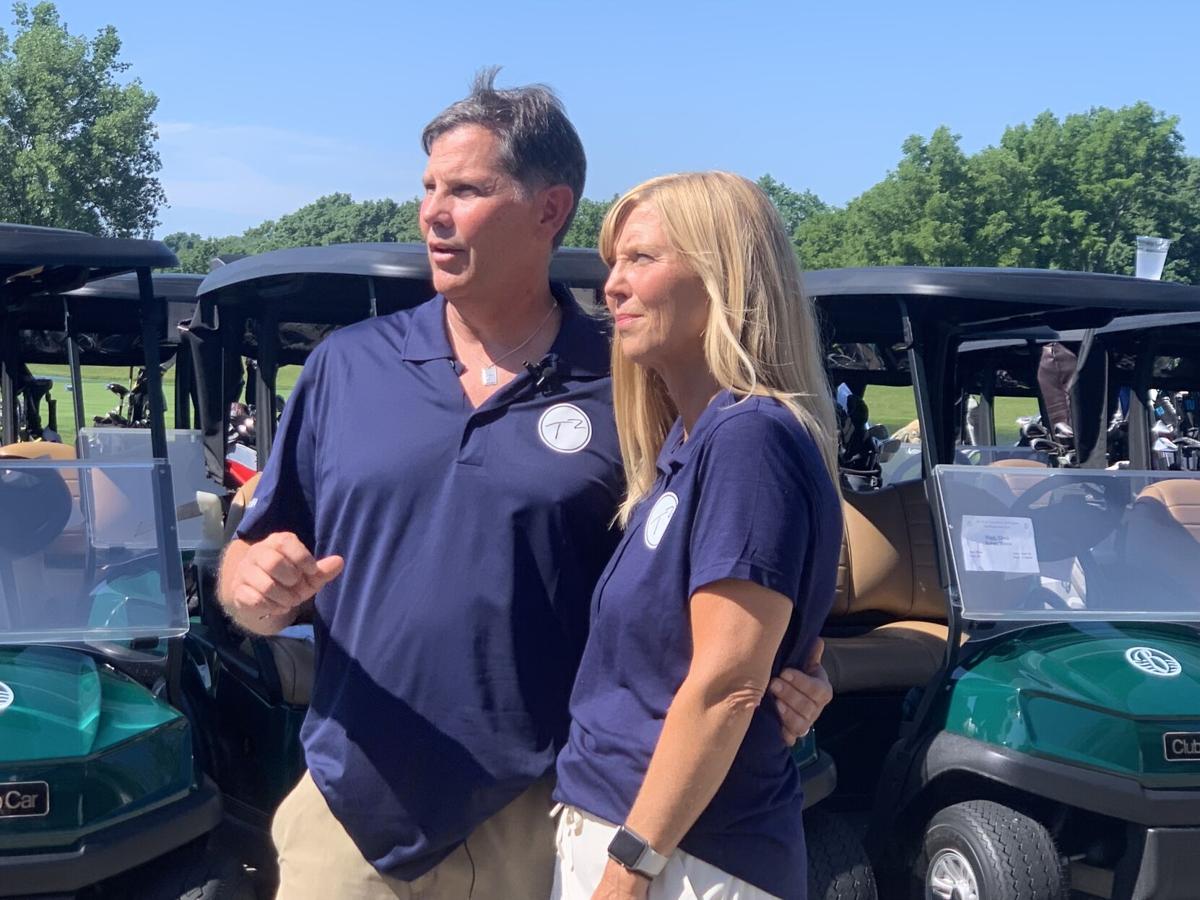 Tony and Kelly Trent pose for a photo outside the golf course. 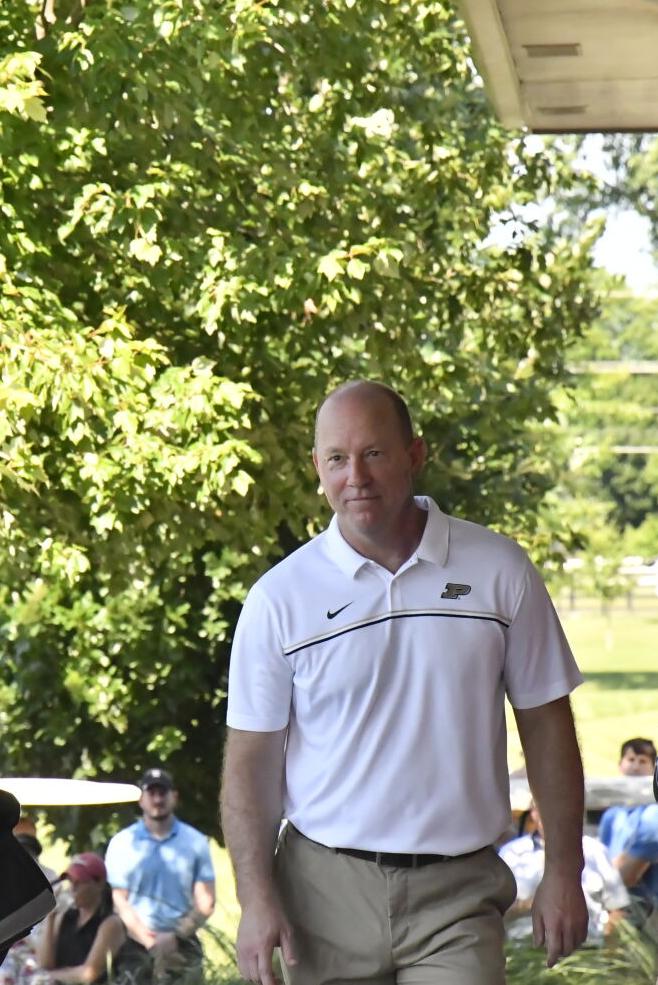 Purdue football coach Jeff Brohm walks toward the stage to give a speech to the crowd. 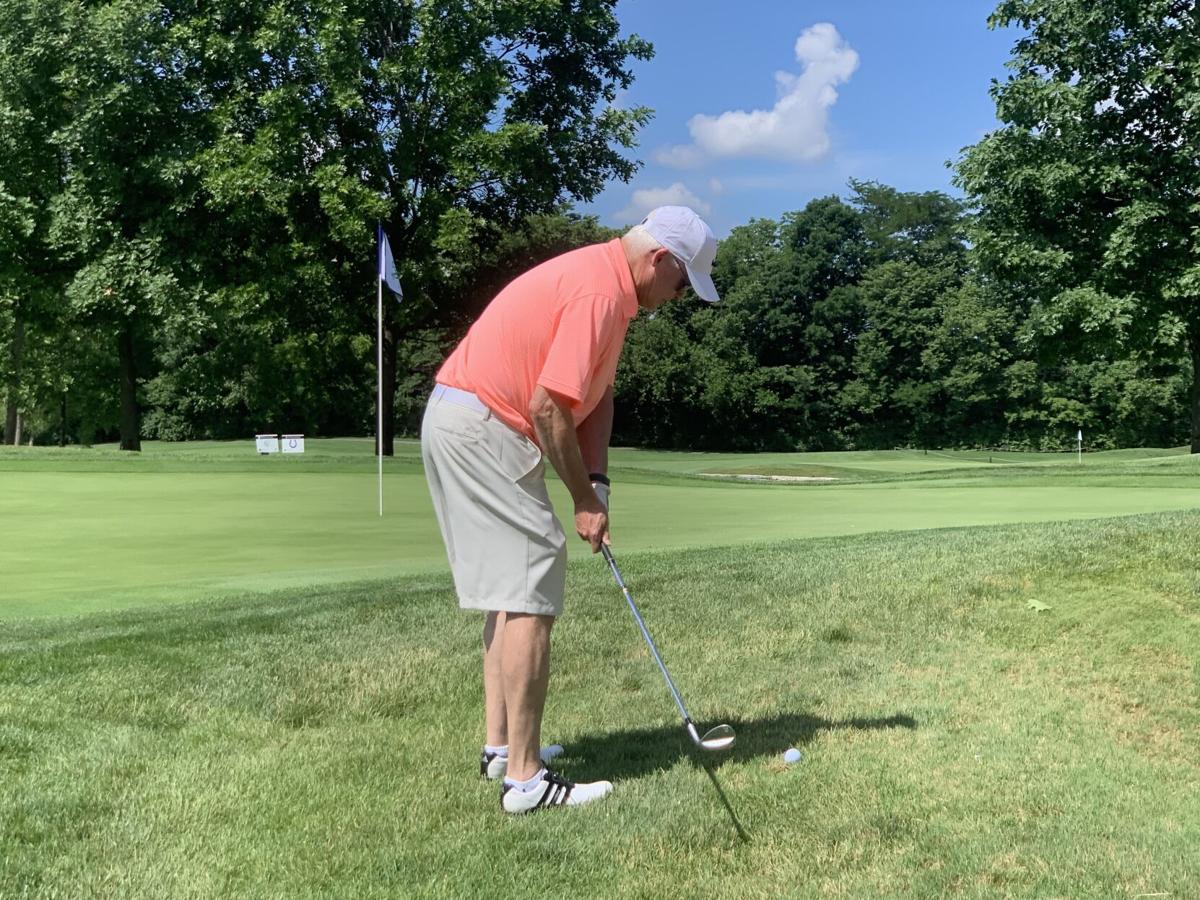 The Rev. Bill Dinsmore prepares to hit the golf ball into hole nine. 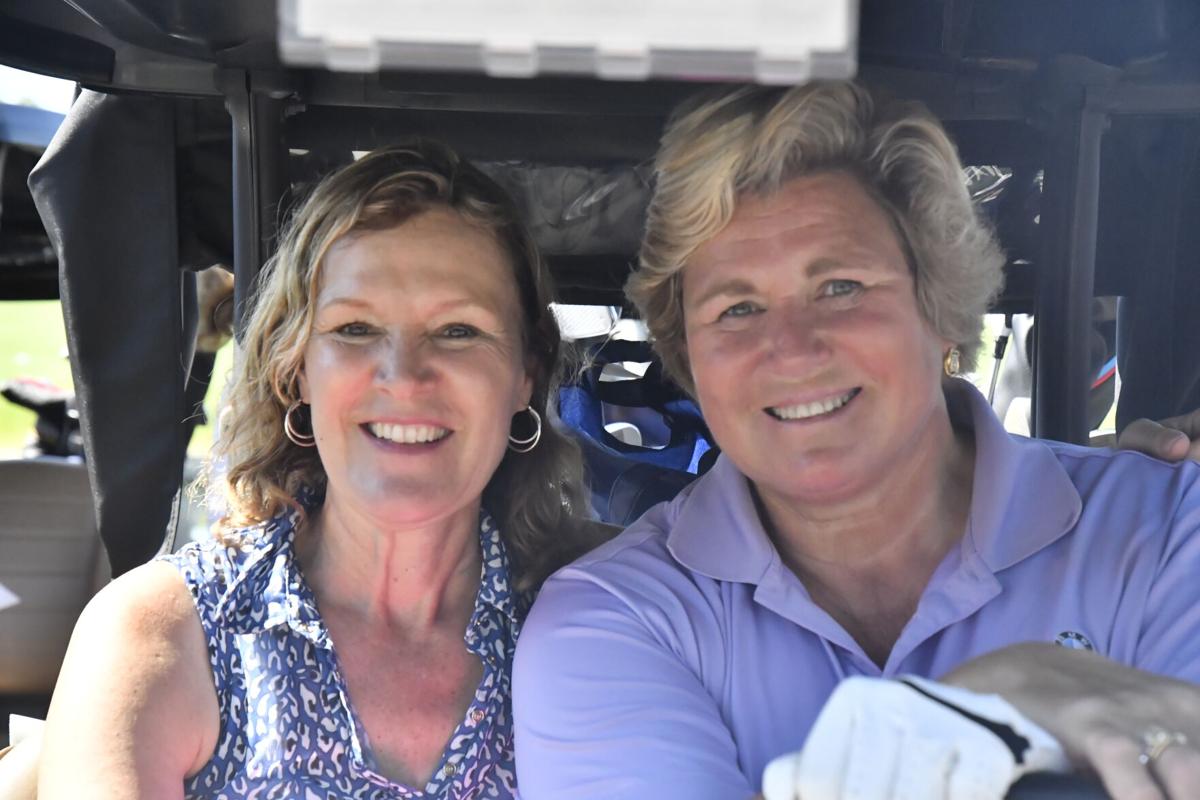 Gail Boudreaux, president and CEO of Anthem, Inc. and sponsor of the golf outing in Tyler Trent's name, shares a golf cart with Sara French. 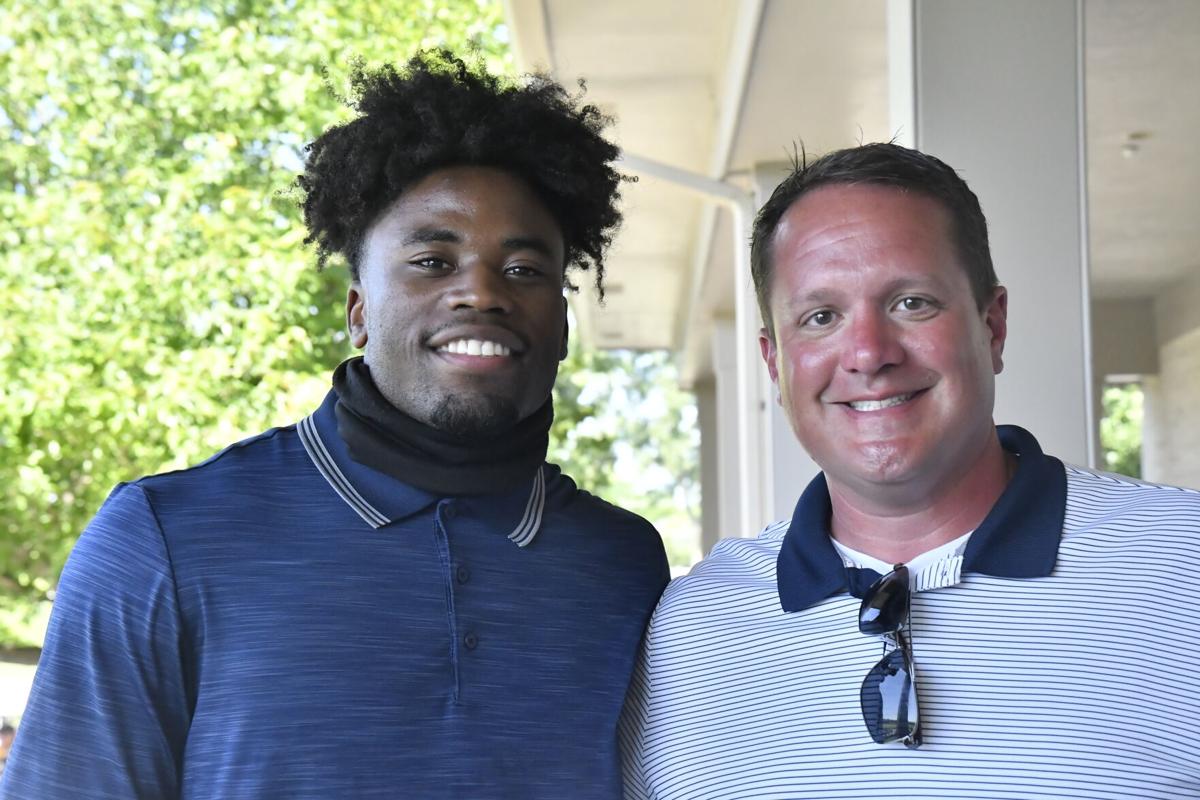 Kenny Moore II, an Indianapolis Colts player, and Kevin Garvey, father of "Mighty" Mason, a 9-year-old who lost his battle with cancer, participate in the charity golf event. 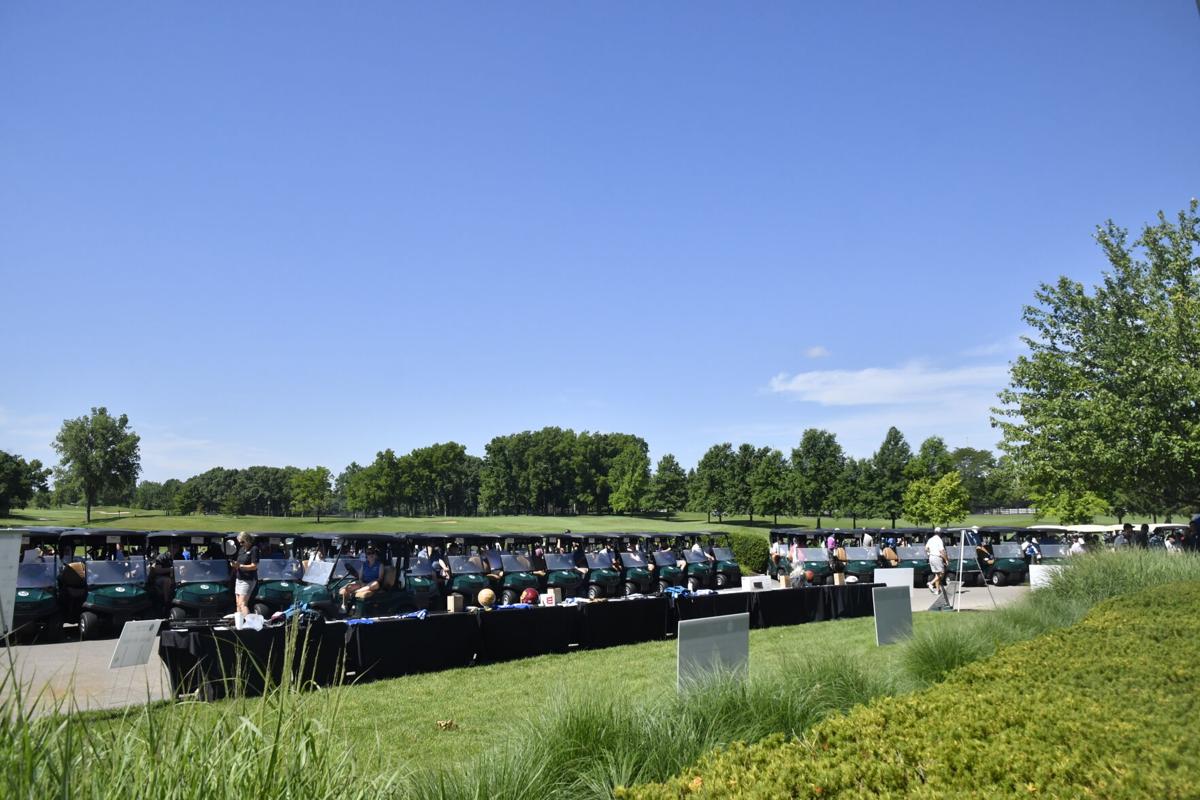 More than 140 people participated in the golf classic event. 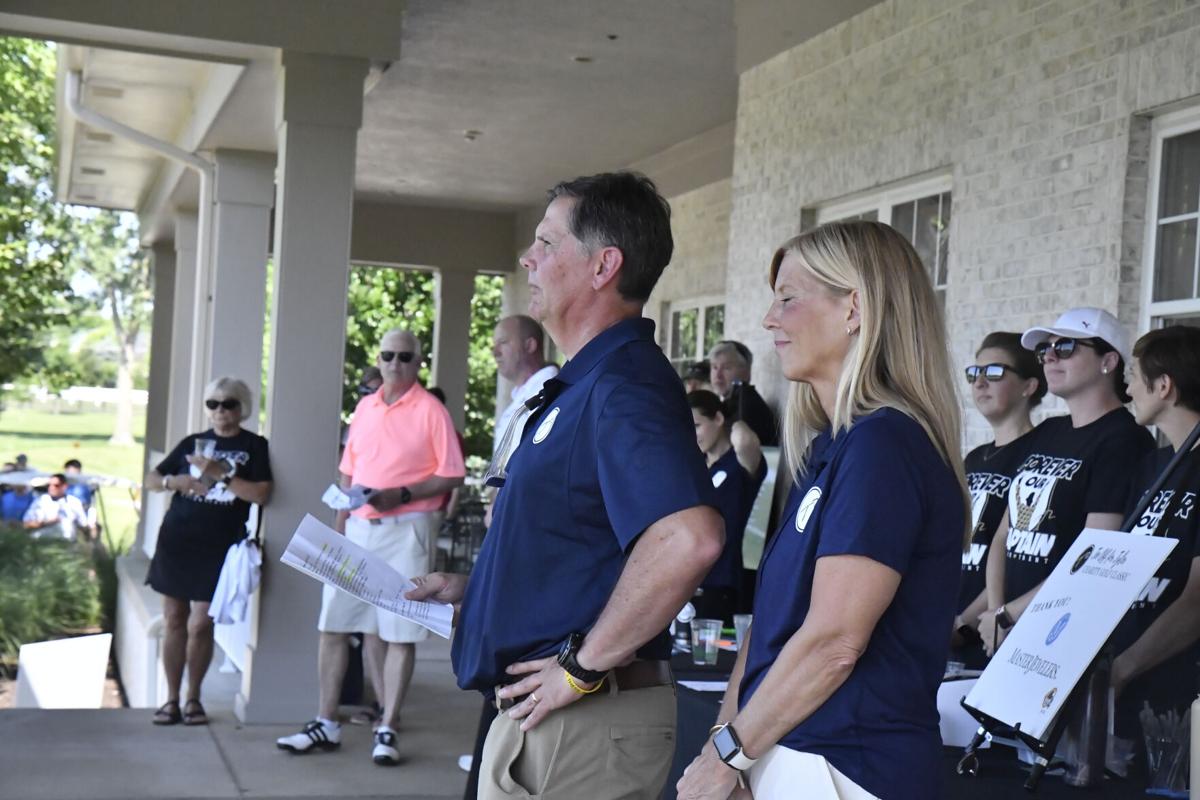 Tony and Kelly Trent listen to their pastor speak about their late son, Tyler.

Tony Trent's voice waivers as he asks the golfers to smile for Tyler out on the green that afternoon.

Tony and Kelly Trent pose for a photo outside the golf course.

Gail Boudreaux, president and CEO of Anthem, Inc. and sponsor of the golf outing in Tyler Trent's name, shares a golf cart with Sara French.

Kenny Moore II, an Indianapolis Colts player, and Kevin Garvey, father of "Mighty" Mason, a 9-year-old who lost his battle with cancer, participate in the charity golf event.

Tony and Kelly Trent listen to their pastor speak about their late son, Tyler.

CARMEL, Indiana — The smiling faces of over 140 golfers looked up from rows of golf carts to hear Tony Trent speak of his late son, Tyler Trent, a devoted Purdue fan whose battle with cancer sparked national outreach.

Tony’s request of the crowd was simple.

“Will you smile for him?”

The father’s voice wavered for a moment as he addressed the large crowd from the balcony of the golf clubhouse. The day brought sunshine and bright blue skies despite fear of rain from event coordinators. As the eager listeners prepared to take to the 18-hole course, they each took a moment to remember why they were at Monday afternoon’s event.

20-year-old Boilermaker Tyler Trent died in 2019 after a battle with a rare bone cancer, osteosarcoma. Tyler’s nickname in high school was “Smiley,” Tony recalled. His nickname was a tribute to his positive attitude and how, despite his circumstances, he always “smiled a lot through his life."

The inaugural golf classic “Tee off for Tyler” was hosted at the Bridgewater Club in Carmel, Indiana, the family's hometown. Situated between cobblestone walkways and a shaded residential neighborhood, the golf course was green and open, and the golfers traveled on fully electric golf carts. Proceeds from the event went to The Tyler Trent Foundation, a nonprofit established by the Hamilton County Community Foundation in 2019.

Tyler received national recognition from his story, and used his new platform to encourage fans to donate to cancer research. Over $3.1 million has been donated in Tyler’s name, according to a press release. His memory continues to tug at heartstrings and bring in donations through charity events in his name, something his family said they believe would make him proud.

Tony said the Trents wanted the profits of this event to go to the Tyler Trent Foundation so they can donate the money specifically to pediatric cancer research. Kelly Trent, Tyler's mother, said the golf event was meant to happen last year, but was postponed because of the pandemic.

“So this is our first big fundraiser to be able to then give back to pediatric specific cancer research,” Kelly said. “I'm just excited to drive around in a golf cart and talk to people as they're playing and just see the faces that are here. It’s an overwhelming feeling.”

Tony said the event had a lot more participants than they expected, being in its inaugural year. He said many charity events usually take the form of dinners or auctions, but they wanted to do the golf outing specifically because it also captured Tyler's love for sports. He called the outpour of community support “undeserving,” a word Tyler would often use to to describe himself in regard to the national support he received.

“I can just see the smile on Tyler’s face and him shaking his head just because he'd be so humbled that people would be coming out for him,” Kelly said.

Purdue football coach Jeff Brohm spoke in honor of Tyler, specifically noting how his positivity helped encourage the football team. During his time at Purdue, Tyler was named honorary co-captain of the team.

“His courage, his ability to display that tremendous personality in adverse situations like no other was contagious and it definitely helped our team achieve a lot,” Brohm said to the crowd. “It gave us the ability to do things that we didn't think we could do. And that just tells you how special a person he was.”

The Trent family's pastor, the Rev. Bill Dinsmore, joined in the game with a group from the College Park Church in Carmel. Walking to retrieve his golf ball at the top of hole 9, Dinsmore readily shared fond memories of Tyler.

Dismore said one of Tyler’s favorite Bible verses was First Thessalonians 5:16-18, and that it was the verse he read the morning he learned that he had cancer. Dinsmore also read the verse to all of the golfers during the opening ceremony of the event, just before he led the participants in prayer.

“Rejoice always, pray without ceasing, give thanks in all circumstances, for this is the will of God in Christ, Jesus for you,” Dinsmore recited.

Tyler’s youth minister Alex Anderson, who was golfing with Dinsmore, said he often spent three or four days a week at the hospital with Tyler during his cancer battle. Anderson said faith was a large part of Tyler’s life, and that remained consistent throughout his illness — something he felt helped him stay so positive.

Donations to the Tee off for Tyler fund can be made here.

Tyler Trent supporters participated in an inaugural outing at the Bridgewater Golf Club in Carmel on June 28. Nearly 145 people gathered at th…

'He's never let any obstacle get in his way'

The Bridgewater Club in Tyler Trent's hometown of Carmel, Indiana, will host the “Tee Off fo…

As Purdue University Dance Marathon festivities encompassed most of the weekend, many though…

A corn maze in Thorntown, Indiana, is paying tribute to Boilermaker superfan and graduate Ty…

Trent to be honored with ESPN humanitarian award

Tyler Trent's legacy lives on through his donations to the field of cancer research.

Students are pleased with the news that Tyler Trent, the late Purdue alumnus and athletics s…

When you’ve walked for over 70 miles in a span for 48 hours, pain is insurmountable. Aaron L…

For about the past six months, Tyler Trent, the late Purdue graduate who retained grace in t…

Remembering Tyler Trent as much more than an avid sports fan

A frigid breeze blew over the steps of Hovde Hall on Wednesday evening, but Tyler Trent’s br…

Tyler Trent will always be remembered as a Purdue football captain. It was his true passion …

Tyler Trent remembered for love of God during funeral

Tyler Trent's faith was a crucial part of his identity, according to each and every friend, …

Tyler Trent: Trent's legacy at the Center for Cancer Research

Column: How do we honor Tyler Trent?

Tyler Trent story has impact across the country

The story of Tyler Trent, the Purdue superfan who died on Jan. 1, continues to resonate thro…

Tyler Trent: Trent's legacy in the Center for Cancer Research

The beginning of Tyler Trent’s impact on campus started, perhaps, with the University’s bigg…

UPDATE: Purdue has changed the date of its candlelight memorial for Tyler Trent to Wednesday…

Social media reacts to the passing of Tyler Trent

Once the news broke that Tyler Trent had passed away on Jan. 1, the Purdue and college footb…

NASHVILLE, Tenn. — For a story that has captured the hearts of Purdue fans across the countr…

Wednesday's Sagamore of the Wabash recipient, Tyler Trent, announced on Twitter on Thursday …

Wednesday was quite the day for Tyler Trent.

Purdue’s Tyler Trent, who was a visitor at Ross-Ade Stadium again on Saturday, was a special…

The National Bobblehead Hall of Fame and Museum has just released a Tyler Trent bobblehead.

Purdue superfan Tyler Trent has a lot of signed jerseys in his room at home, but the one sig…

Tyler Trent to appear on SportCenter with Scott Van Pelt

Purdue Football: Big opportunity for the Boilers as No. 2 Ohio State comes to town

Three games into the season, the state of Purdue football was quite different than it is this week.

‏Tyler Trent, the Purdue sophomore and Exponent writer who has recently withdrawn from campu…

He couldn’t be on campus or in Lincoln, Nebraska, to watch Purdue’s victory over the Cornhus…

Editor's note: A previous version of this article stated that Trent received an honorary deg…

Editor’s note: Tyler joined the Exponent as a sports writer in January. He is currently unde…

Football is a sport of hard knocks, but one fan’s battle has put all of the field-earned sca…