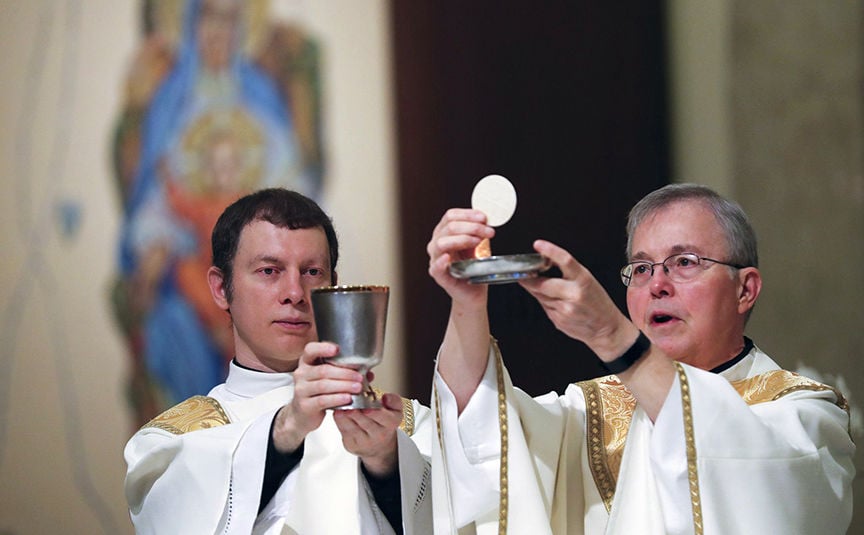 Purdue graduate and Deacon Pat Gorman, left, assists at a Mass celebrated by the Rev. Jerry Gunderson at Mary, Seat of Wisdom Parish in Park Ridge on April 29, 2020. 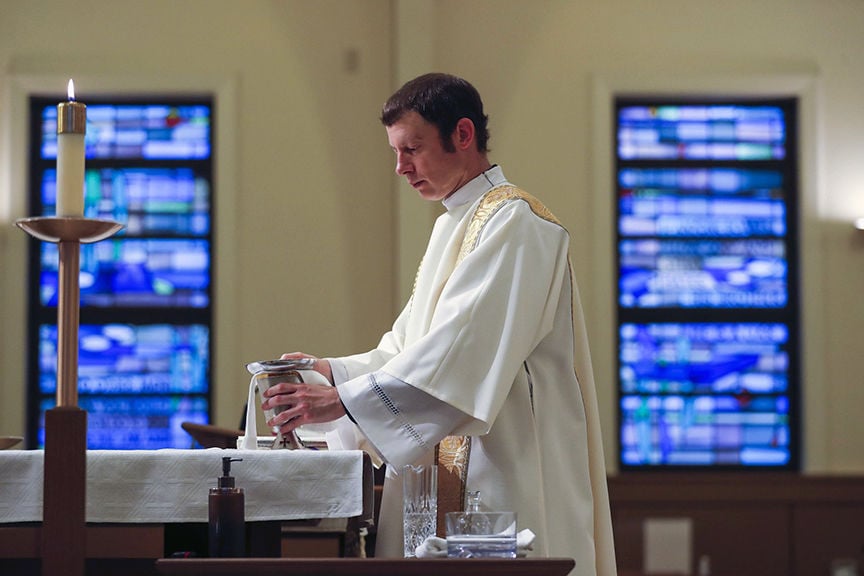 Deacon Pat Gorman, a Purdue alumnus, assists with daily Mass prep on April 29, 2020, at Mary, Seat of Wisdom Parish in Park Ridge. His ordination has been delayed by the COVID-19 pandemic. 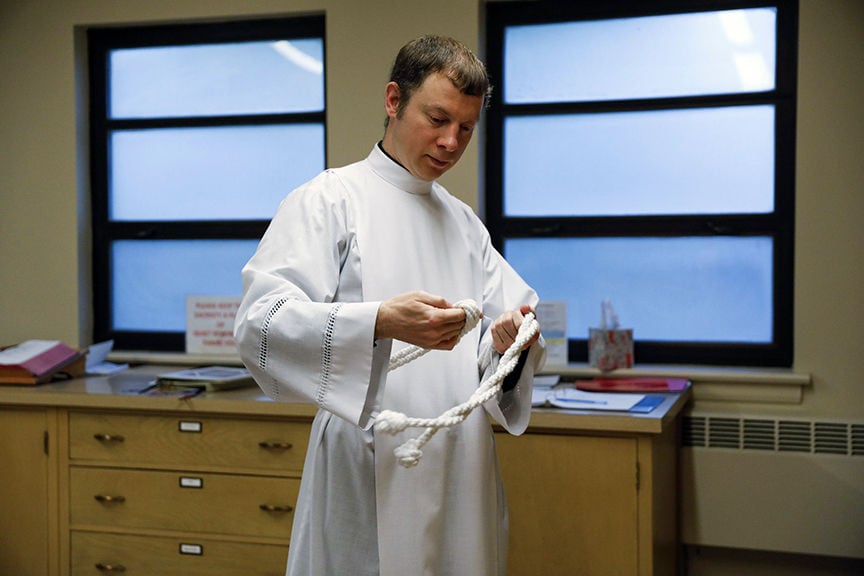 Deacon Pat Gorman, 42, a Purdue alumnus, gets ready for a daily Mass at Mary, Seat of Wisdom Parish in Park Ridge.

Purdue graduate and Deacon Pat Gorman, left, assists at a Mass celebrated by the Rev. Jerry Gunderson at Mary, Seat of Wisdom Parish in Park Ridge on April 29, 2020.

Deacon Pat Gorman, a Purdue alumnus, assists with daily Mass prep on April 29, 2020, at Mary, Seat of Wisdom Parish in Park Ridge. His ordination has been delayed by the COVID-19 pandemic.

Deacon Pat Gorman, 42, a Purdue alumnus, gets ready for a daily Mass at Mary, Seat of Wisdom Parish in Park Ridge.

Pat Gorman sat in his graduate student office at Purdue University when an administrative assistant rushed in and told him that America “was under attack.”

Gorman, then a 23-year-old aspiring software developer, rushed to the nearest television and watched in disbelief as two airplanes crashed into the World Trade Center in New York City. And while that apocalyptic moment would forever change America, it inspired a decades long journey for Gorman that would ultimately lead to priesthood.

“After 9/11, I wanted to use my life and use my career to do good and to have a positive impact in the world,” said Gorman, 42, a deacon at Mary, Seat of Wisdom Parish in Park Ridge and student at Mundelein Seminary.

Now, with the coronavirus pandemic, hundreds of Catholic deacons across the country, including Gorman, find themselves waiting for ordination as they are on the verge of priesthood.

As American colleges and churches abruptly closed last month because of the pandemic, seminaries followed suit, forcing aspiring religious leaders attending seminaries to wait before fulfilling their ambitions of becoming priests or pastors. Chicago historically has had more seminaries than any other metro area in the country, according to the Encyclopedia of Chicago, so the shutdowns have hit hard here.

In the Archdiocese of Chicago, Mundelein Seminary has indefinitely postponed the ordination for priesthood candidates from the archdiocese.

“Cardinal Blase Cupich and I are deeply saddened that these liturgical celebrations have to be postponed,” said the Rev. John Kartje, rector of Mundelein Seminary. “However, it is important that we abide by the current directives for large gatherings. We want these liturgies to be accessible to all, and they will serve as a joyful beginning for the entire archdiocese to celebrate when we come out of this situation.”

The decision to postpone ordinations is up to each individual diocese. The Joliet Diocese has also delayed its ordinations. The Diocese of Gary, however, will proceed with a private ordination for its one new priest. The ordination will comply with all social distancing guidelines, a diocese spokesman said.

The process by which a seminarian reaches ordination  varies across denominations, so not all faiths are being affected in the same way.

In the Evangelical Covenant Church, graduating seminary students wait two years before they are ordained, said David Kersten, dean of the seminary at North Park University.

In the Evangelical Lutheran Church in America, prospective pastors are not ordained as ministers until a church selects them to preside over a congregation.

David Rebey, who had a 30-year career in the health care industry before enrolling at the Lutheran School of Theology, said he, too, looked forward to an in-person ceremony -- marching into the church where the graduation was scheduled to be held and being surrounded by family, friends and former graduates.

“When I and others first found out that we were not going to be able to participate in that special event, it was very disappointing,” said Rebey, 59.

Leaders of seminaries who have spent the past few years shaping and preparing students for ministry understand the heartbreak that comes with not being able to mark the end of their journey with a traditional graduation.

“We want them to celebrate their hard work,” said Stephen G. Ray Jr., president of Chicago Theological Seminary. “This is the end of their time having been a big part of the community, and we know it’s painful not being able to rejoice with each other.”

“They’ve finished their ministerial journeys, but they’re also grieving not being able to walk for graduation,” he said. “But we will still do something virtually, because a commencement, for us, is a joyous celebration for years of hard work.”

Despite being disappointed, graduating seminary students said they recognize the need to postpone ordinations and hold virtual graduations.

The ceremonies are a “profoundly optimistic, celebratory and hopeful moment in the church” and should be celebrated publicly, Gorman said.

He spent the past 20 years on a winding journey, which included teaching English to 3-year-old students in Taiwan, working in Alabama as a software developer, and studying and working in China before becoming a student at Mundelein. Gorman’s first act going into the priesthood will be to wait, he said.

“At the seminary, we learn that our life is not our own,” he said. “And the priesthood is all about making a gift of ourselves to others and the church.”