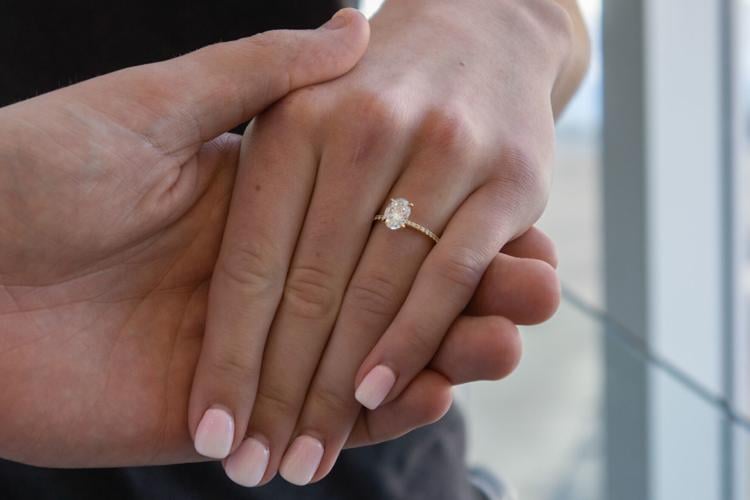 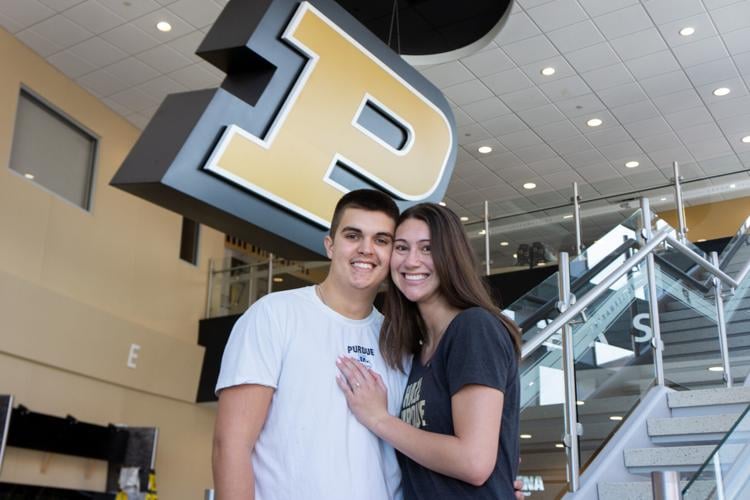 Aidan O’Connell and Jael Johnson got engaged in late January.

Aidan O’Connell and Jael Johnson got engaged in late January.

From the field and the court to the wedding altar, a love story between two star Purdue athletes takes a giant leap as Valentine’s Day approaches.

The two met in 2018 when Johnson was a freshman and O’Connell was a sophomore, through the Fellowship of Christian Athletes club at Purdue. The club is a weekly Bible study and discussion group for Purdue athletes who are Christian believers.

“Through FCA, we saw each other regularly, and we’d hang out in group settings,” Johnson said. “Our relationship just blossomed into occasional ice cream and things like that. We then started dating the summer after my freshman year.”

Throughout their student and athletic careers, the couple’s schedules conflicted often. As both athletes played fall sports, it was hard for them to find the time to be together and watch each other play.

O’Connell said that although they were both busy, especially during the fall semester, they cherished the little time they spent together, even if it was simply running errands.

“It is busy,” O’Connell said, “Any athletics schedule is busy, but we were still able to find time at the end of the day. Maybe not for too long, just a couple hours at night, but that time was important for us.”

Despite the couple’s busy schedules, they made sure to make time to watch each other play as much as they could. Both said they get nervous watching, but emphasized that they love to see each other perform to their highest ability.

“I couldn’t go to many of his games this year, so I watched them mostly on TV,” Johnson said. “We were also traveling a lot so I would watch them with my volleyball teammates, which was really fun and special.”

O’Connell added that whenever he could, he would go to Johnson’s matches to watch her play and support her.

“If it was here, I would try to go to as many games as I could,” O’Connell said. “A lot of the time they’d play on Sundays. We have practice all Sunday so I watch a lot on TV as well.”

After making four years of memories, O’Connell planned a surprise proposal for Johnson. He knew that he wanted to propose somewhere near Johnson’s house in Mooresville, Indiana, and got her mom and aunt involved in planning a fake party for her cousin.

The “party” was planned for a Saturday. Johnson invited O’Connell and they both went to the party without Johnson having any suspicion.

“I knew the whole time and had planned for the proposal to be at Jael’s grandma’s house. She lives on a cool little lake and I had a photographer set up rose petals on the dock with some pictures.”

He pulled off the entire surprise without any suspicion from her. Leading up to that weekend, Johnson said she knew about her cousin having a surprise party, but didn’t know that it was fake.

Johnson said she had a sneaking suspicion O’Connell would propose the day before. The next day, she figured she would see all of her extended family at the party to celebrate with them.

“We had a date planned and there were just so many signs pointing to Friday,” Johnson said. “The whole time, I had my hopes set up for that.

“Friday came and went and he didn’t propose. I called my best friend Friday night and I said ‘I’m devastated.’ It was a super dramatic spiel.”

Johnson said she was “heartbroken” Friday night, and from then on, she came up with excuses when O’Connell would seemingly drop hints of the proposal.

“All Saturday, there were so many hints,” Johnson said. “He kept grabbing his jacket pocket and checking on the ring, but in my head I was thinking ‘maybe he’s just really sore.’”

Even with the many indications O’Connell gave, he managed to completely hide it from Johnson. She said she thought it was very impressive.

The two explained their future plans after they are married. Their living situation will depend on where O’Connell’s career leads, as he aspires to play in the NFL.

O’Connell had, by far, his most productive season as Purdue’s signal caller this year, helping lead Purdue to its first bowl victory since 2017, as the team beat Tennessee in a shootout 48-45 win in the Music City Bowl. This season, he threw for career highs in both yards, with 3,177, and touchdowns, with 23, while earning a career-high completion percentage of 73%, according to Purdue Athletics. O’Connell will be returning next season for his sixth year of eligibility.

Johnson made a name for herself during her Purdue volleyball career as well. This season, the Boilermakers reached the Elite Eight round of the NCAA Tournament, before falling to the Pittsburgh Panthers 3-1. She had her second best number of kills in a season (158) with a .293% hitting percentage and a career high in blocks (113), according to Purdue Athletics. Johnson will be returning to Purdue for graduate school, but will not be playing volleyball.

Johnson is studying for her master’s degree in speech, language and hearing sciences in the hopes of having a career working in the geriatrics community.

“I’m hoping to do speech language pathology and work with acute stroke care in older adults,” she said. “However, I’m trying to keep an open mind going into school because a lot can change.”

Even with all of the future uncertainty, one thing is for sure. The couple plans to have their wedding on July 30 in southern Indiana, close to Johnson’s family.

“We have a lot of the details ironed out, but we still have a lot of stuff to go through and we’re working on it,” O’Connell. “We got the big stuff figured out.”