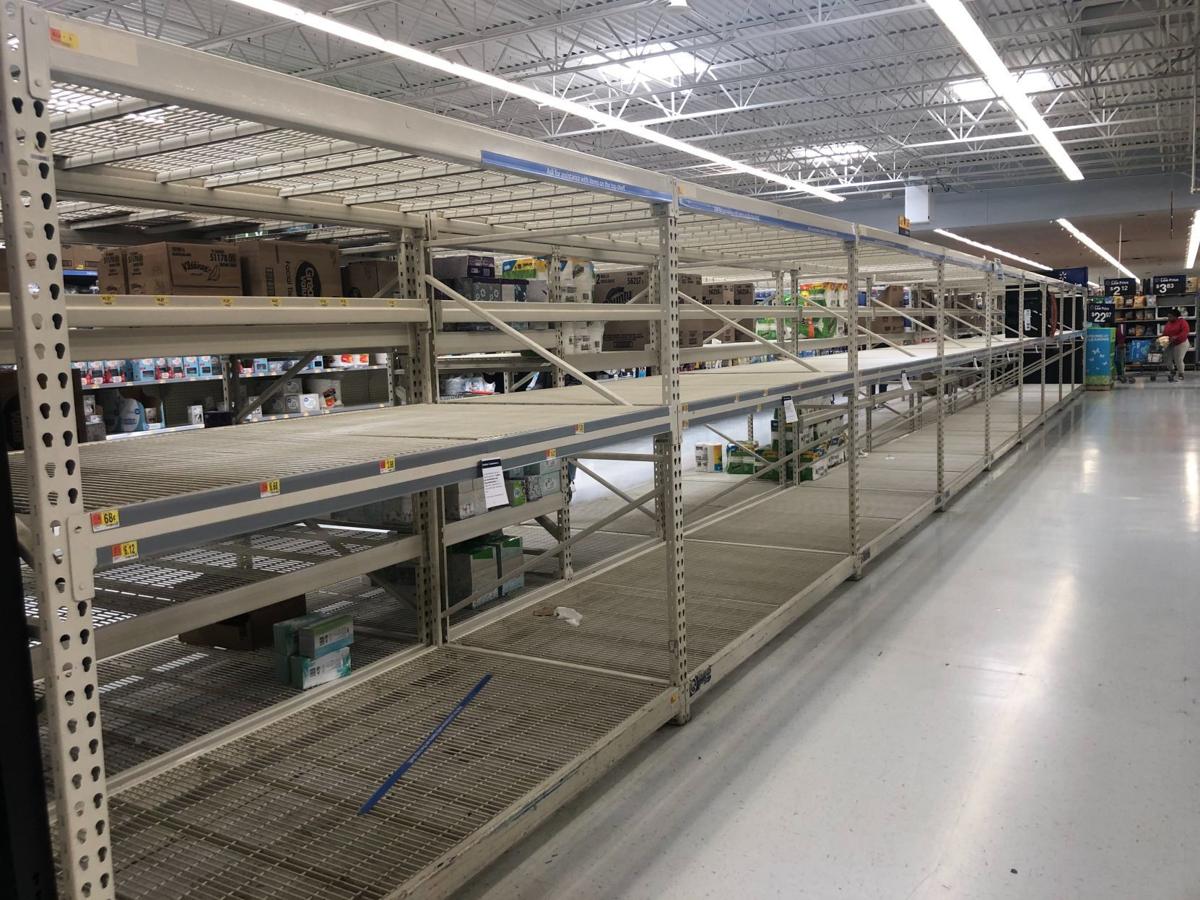 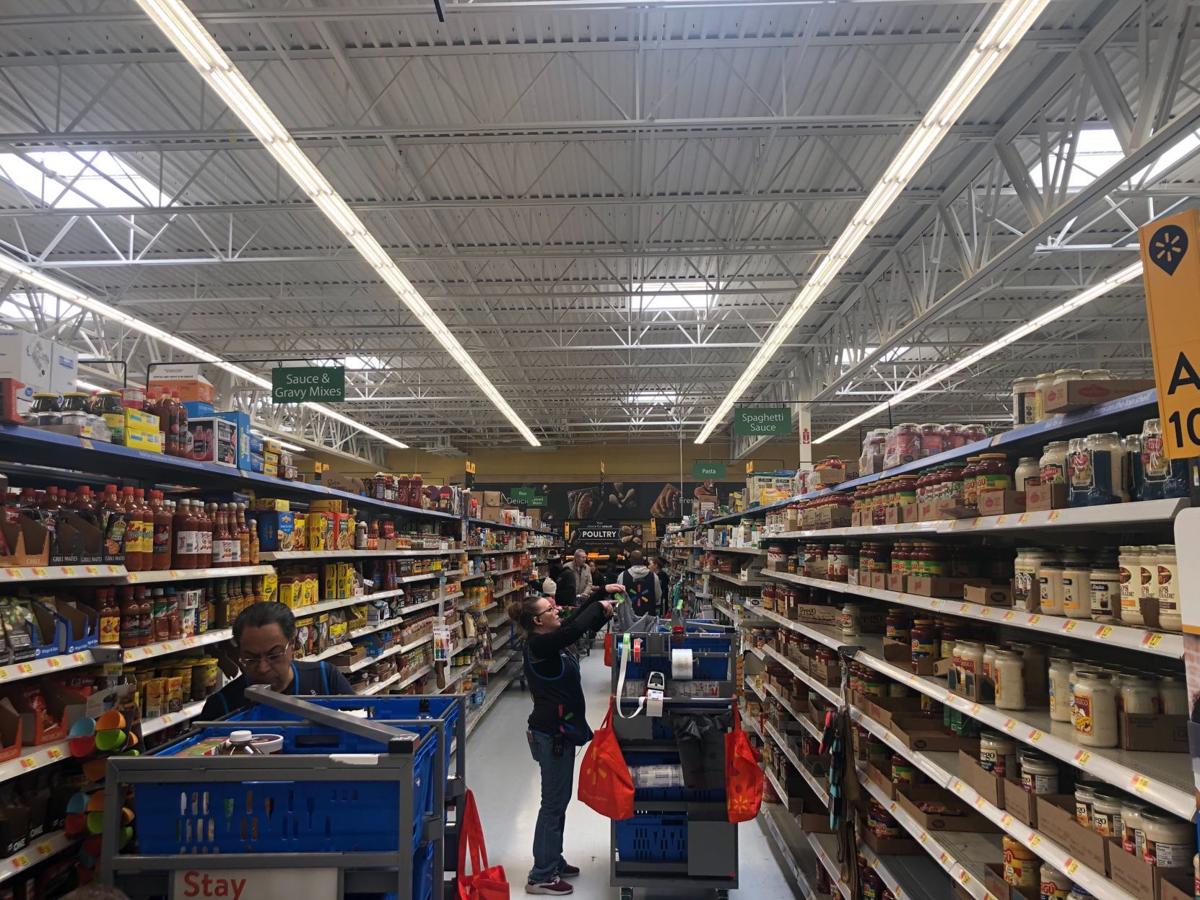 Walmart deployed a fleet of workers to stock shelves to meet a spike in demand for essential goods, nonperishable foods and sanitation products.

Two Walmart shoppers walked into the toilet paper aisle last week. It was empty. They turned to look at one another, mouths gaping. Then they began laughing hysterically.

“On social media, you see people are overreacting and buying toilet paper, but you see it here and it’s crazy,” said Mary Rothenberger, a junior in the College of Pharmacy, who said she was only there to buy snacks.

Writing this feels like the beginning of an angry Facebook rant in the era of the coronavirus pandemic. Consumers are engaging in a phenomenon known to behavioral economists as "panic-shopping."

Stores in West Lafayette like Pay Less, Target and Aldi have been bewildered by the spike in consumer demand. Their response has been to impose quantity limits on basically anything with the word “clean” on the package, and to roll out a fleet of dozens of shelf-stockers who overwhelm the shopping space.

“This is not normal. This is a really weird time,” one Walmart worker, stocking depleted shelves with boxes of pasta, said in passing. “People are nuts.”

Moore harks back to the 1946 classic “It’s a Wonderful Life” — a movie he promised that people who aren’t oblivious college students like me would recognize — to explain the behavior. The film features a scene in which customers partake in a bank run, a last-ditch effort by a large portion of a bank’s clientele to pull money out of their accounts in times of extreme financial hardship.

In the movie, banker George Bailey, played by James Stewart, pleads with customers to view the bank as a communal resource and withdraw only enough money to hold them over. By asking people to moderate and take only a handful of dollars, he staves off the possibility of everyone losing their deposits and keeps the bank solvent.

This idea is what’s known in economics as the prisoner’s dilemma, Moore explained, where a rational person chooses to do something based on the assumption that all other rational people are doing the same. It’s perhaps the purest distillation of American individualism.

“What is overall best for a group is not necessarily compatible with what’s best for an individual, and so you can end up with a suboptimal outcome,” Moore said. “The prisoner’s dilemma results because the prisoners can’t talk to each other, they can’t coordinate in some way.”

All shoppers would be better off if others bought a reasonable amount of toilet paper, but the assumption is that others won’t, so why should any one person?

It’s a paradox that’s frustrated broad swaths of store-goers and social media users. It may be helpful to consider that it arises merely from a lack of communication.

Coordination is, unsurprisingly, extremely difficult. Limits imposed by stores are one form of rationing to alert consumers that their behavior is weird. Next would be raising the price to serve only those buyers who value scarce products most, but the early stages of a pandemic are not an ideal time to field accusations of price-gouging.

The banker in the movie relied on people to take $20 or less to outlast the financial crisis. This balancing act is one founded in mutual trust: Only if consumers agree to buy less and store owners promise to stay in business can it work.

“Just remember this thing isn’t as black as it appears,” Bailey says to the frenzied crowd of bank customers. “We can get through this thing all right. We’ve got to stick together, though. We’ve got to have faith in each other.”

No one is wrong to panic. The only wrong thing to do is to convince oneself that the havoc this global crisis is wreaking on your life is more significant than the consequences it’s having for anyone else.

Though shoppers cannot be blamed for overfilling a shopping cart with toilet paper, nonperishables and enough cleaning supplies to scour a landfill, they should still stop. Overcoming this panic demands community responses. It demands individuals coalescing to support the most vulnerable people in our society whose lives actually depend on store shelves being stocked.

The pandemic has exposed glaring flaws in the ways people think and behave, and the helpful course of action is to correct for the future without regressing to the status quo.