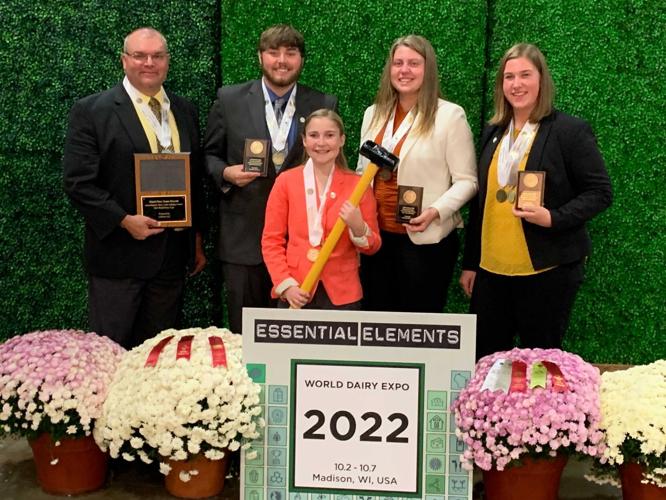 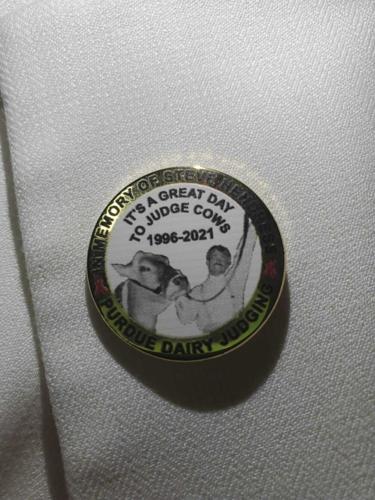 After a three-year hiatus and two months of practice, the Purdue Dairy Judging team earned third place at what a member of the team described as the “Super Bowl of dairy judging.”

The team earned a third-place finish out of 15 colleges at the World Dairy Expo in Madison, Wisconsin on Oct. 2. It was Purdue’s second-best finish ever and its best at the competition in 54 years.

The dairy judging competition — where individuals evaluate cows based on their ability to make dairy — consists of judging 12 classes of four cows.

Each individual evaluates and ranks the cows based on a variety of traits, such as udders; feet and legs; frame; and dairy strength and character.

Utters make up 60% of the score. Frame is judged by how big the cow is and how mobile it is. Dairy strength and character are based on physical markers of the cow’s milking ability and can be told by how skinny and angular the cow is.

In other words, they’re looking for “the Gigi Hadids of the cow world,” according to Josie Burbrink, a sophomore in the College of Agriculture.

Rankings determined by the teams are compared to the rankings of contest officials, who are veteran cow evaluators in the dairy community, and each person receives a score based on how close they are to the evaluators’ rankings.

The members also compete in “oral reasons,” where they give arguments and reasoning behind their rankings.

“You get 15 minutes to place these cattle in what you think is the best cow to the worst cow,” Slonaker said. “You have to nitpick every little thing apart, because there is nothing wrong with them. So you do that 12 times, and that took four hours. And then for (oral) reasons, you get 15 minutes to prepare your set of reasons and be able to deliver flawlessly. That took three hours.”

Outside of the oral reasons, all of the competition, including lunch, is done in complete silence.

“It is mentally taxing,” Burbrink said. “You don’t realize how mentally worn out you are until after the contest.”

Steve Hendress coached the judging team, and was advisor of the Purdue Dairy Club, since 1987 before retiring in 2021 because of cancer, which killed him in 2021. Cook had practiced with the team when Hendress was the coach in 2019.

“He was like a dad or a grandfather to me,” said Miriam Cook, a senior in the College of Agriculture. “He was just super personable and easy to get along with. He almost acted like a therapist for a lot of us students. (He would typically) have three to four students just sitting in his office for hours on end, just talking. Even just beyond students, (with) his colleagues in the dairy world, he was highly respected.”

Because of the pandemic and Hendress’ retirement, Purdue was left without a dairy judging team for three years, until Cook restarted it.

Cook said her work to restart the team had three main inspirations: to have a team to compete with in her senior year, to ensure dairy judging would continue at Purdue and to honor Hendress.

“Since Purdue hasn’t had a team in the last three years, we were just expecting to get in the groove of things and make it known that we’re back,” Slonaker said. “The overall goal was to make sure that there would be teams for years to come. We were not expecting to do this well at all.”

Burbrink, who began judging dairy cattle for the first time ever a month before the expo, earned the best finish of the team, placing 10th out of 60 individuals.

Top 25 roundup: No. 9 UCLA bounces back vs. Washington

“I have no experience dairy judging, so I’m pretty sure I was texting my dad when they announced that 10th overall placing and they all had to tap me and tell me to go to the front,” Burbrink said. “It was pretty surreal, I think when they announced the third overall (placement), our team was just in absolute shock. We all stood up and screamed.”

Purdue won the competition in 1968, but had only finished in the top 10 five times since then.

The team’s connection to Hendress made the win even more emotional, Burbrink said.

“He impacted so many lives by being the coach for the Purdue team and not only did he impact lives there but within the dairy club, and out in the showing community,” Slonaker said. “He was just an overall great person and he truly would uplift people and inspire people to do what they wanted to do.

“For us, it was emotional because it was like we did it for (Hendress). He was looking down on us that day”

The team carried pins of Hendress with his signature saying: “It’s a great day to judge cows.”

“It was truly a great day to judge cows,” Burbrink said.

Slonaker credited their coach, Purdue alum Brian Engleking, with helping prepare them for the competition.

“Brian was a classifier for Holsteins for 20 years,” Slonaker said. “In order to be a classifier you have to know cattle well and see them well. You have to be able to distinguish. ‘Yes, that’s a good cow, (or) that’s a bad cow,’ right off the bat.”

“Essentially it comes down just to a great coach that knows what he’s doing and knows how to teach his team how to judge.”

To practice judging cows, the team went to various farms where Engleking had connections from his previous job.

The team went to just one other competition, the All American Dairy Show in Harrisburg, Pennsylvania, finishing seventh and picking up a souvenir on the way.

“When we picked up the van from Purdue Transportation, there was a hammer in the back,” Slonaker said. “And at the time, we were like, ‘Oh, cool, Purdue must supply hammers in the back of its vans,’ and we didn’t think much of it. We get out to Pennsylvania, we’re unloading at our hotel and we’re looking at it and it was the Purdue men’s rugby team’s hammer.”

The team gave the hammer back to the rugby team when they returned, but went out and got a hammer of their own, which they brought to the World Dairy Expo.

Burbrink described the expo as “the Super Bowl of dairy judging.” The expo is known for its “colored shavings” because the sawdust shavings of the show ring are colored differently every year. This year, they were colored black.

“Everyone around the world aims to go to this expo and exhibit their cow,” Slonaker said. “When you’re judging, you’re walking on the colored shavings, and you’re seeing some of the highest quality cattle in the world.

Unsurprisingly, one can find milk and cheese in abundant quantities around the expo. Unfortunately for Slonaker, who is lactose intolerant, water was harder to find.

“They usually have free refreshments at the award ceremony,” Burbrink said. “We had to walk around everywhere to find water, but there was just milk at every possible place somehow.”